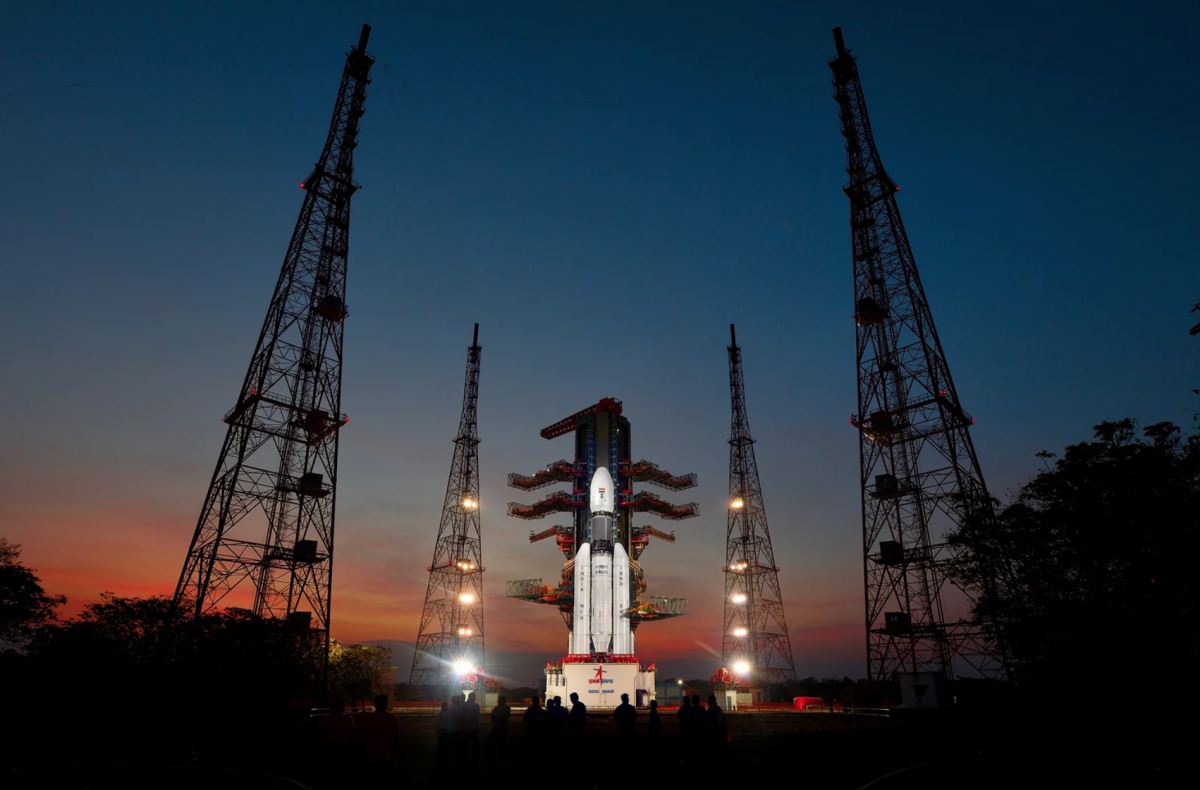 Bengaluru: At 2:43 pm today, the Indian Space Research Organisation (ISRO) successfully launched a GSLV Mk III rocket carrying the Chandrayaan 2 stack of instruments. This is a historic mission that will attempt to land a lander and rover on the Moon’s surface on September 7. If everything goes well, India will become only the fourth country to have achieved a soft-landing on an extraterrestrial body. The orbiter, lander and rover will then perform a slew of experiments on the lunar surface to glean new, hard-earned insights that could inform future attempts to undertake more expansive missions to the Moon.

However, this isn’t the only reason today will become a date of import on our calendars. ISRO also successfully flew the GSLV Mk III on its first operational mission, a little under two decades after the organisation embarked on its indigenous programme to build this rocket.

Today’s launch signals that ISRO is ready with its newest functional launch vehicle and has developed a grip on its idiosyncrasies.

The Mk III variant of the GSLV – which stands for Geosynchronous Satellite Launch Vehicle – succeeds the Mk I and Mk II in power and payload.

The more well-known Polar Satellite Launch Vehicle (PSLV) is a four-stage rocket capable of carrying about 1,500 kg to the geostationary transfer orbit, used by communication satellites. However, modern communication satellites weigh over twice as much, so ISRO built the GSLV, a three-stage rocket. How is it able to carry heavier payloads with fewer stages? Among other reasons, the answer has to do with the amount of thrust the fuel in each stage provides. Where the PSLV uses alternative stages of solid and liquid fuels, the GSLV’s raison d’être is its uppermost stage, called the cryogenic upper stage, which technically utilises a gas in liquid form.

The cryogenic upper stage is home to the cryogenic engine, which uses hydrogen and oxygen as the fuel and oxidiser, respectively. Hydrogen provides the highest exhaust velocity among all known rocket fuels. However, it is a low-density gas in its natural state and is difficult to use as a fuel as such. So engineers liquefy it first and then use it, together with purpose-built turbo-pumps, conduits and containers. This requirement, together with the workings of the cryogenic engine itself, is what makes the cryogenic upper stage so tricky to handle.

The GSLV Mk I, a three-stage vehicle that used cryogenic engines ISRO had purchased from Russia, first flew in April 2001 on a partially successful mission, carrying the GSAT 1 satellite. Its next developmental flight in 2003 was a success, as was its first operational flight the next year. However, the subsequent three operational flights in 2006, 2007 and 2010 were marred by failures. This variant has since been retired.

The GSLV Mk II looks just like the Mk I but uses the indigenously built CE 7.5 cryogenic engine (derived from Russian design and components). Its first developmental flight in 2010 was a failure, but the next two were successful, in 2014 and 2015. Its four operational flights – in 2016, 2017 and two in 2018 – were all successful as well. It is expected to undertake two more missions this year to launch the GSAT 1 and 2 satellites in September and November, respectively.

The GSLV Mk III looks nothing like the Mk I or II; in fact, its design heritage is closer to the Ariane 5. Additionally, its cryogenic engine – the fully indigenous CE 20 – is also very different from the CE 7.5. For one, the CE 20 operates the gas-generator cycle instead of the staged-combustion cycle of the 7.5, a choice that allowed ISRO to test the Mk III on a shorter timescale. For another, the CE 7.5 required the use of two vernier engines to control the rocket’s path while it provided the forward momentum. On the other hand, the nozzles of the CE 20 engine will be able to make small rotations, precluding the use of vernier engines and making the system less complex overall.

The Mk III first flew in December 2014 but without the cryogenic upper stage. The first and second developmental flights with the CE 20 happened in June 2017 and November 2018. Both were successful. Today, the Mk III flew its first operational flight.

The significance of this mirrors the difference between developmental and operational flights. According to Jatan Mehta, a science officer at TeamIndus, developmental flights have the following additional characteristics (quoted verbatim from email):

As a result, as of today, ISRO has finished trying to discover what can go wrong and is ready to demonstrate what can go right.

This is an important development because every time ISRO develops a new engine, it must also build a rocket that can use it. Especially with less ‘conventional’ engines like the cryogenic and the semi-cryogenic units, it is very difficult and cost-intensive to adapt older rockets to fly with them. This is why engineers designed and built the Mk I and II – to use the Russian and CE 7.5 cryogenic engines – instead of loading these engines on the PSLV. It is why they built the Mk III as well. And with a successful operational flight, ISRO has shown that it can use the Mk III as well.

At the same time, as M. Ramesh writes in BusinessLine, the success of the PSLV and GSLV rockets, together with ISRO’s hectic launch schedule, is also what has kept the organisation locked into using dirtier and more complicated engines instead of freeing it up to switch to cleaner, less complex options that can also be more powerful. One such is the semi-cryogenic engine, which ISRO has been developing to use instead of the liquid-fuel second stage on the Mk III and for the Reusable Launch Vehicle, expected to be ready around 2030. This engine uses cryogenic oxygen as oxidiser and high-grade kerosene as the fuel.

But it will be awhile before these successor vehicles are ready. “It is extremely challenging to extend [a vehicle’s] payload capabilities beyond 5.5 tonnes to GTO,” as Narayan Prasad, the COO of satsearch.co, said.

Until then, the Mk III is expected to rule the roost vis-à-vis particularly important missions. “It is the future of ISRO’s space transportation plans, with decades of human-hours having gone into building it,” said Prateep Basu, cofounder of SatSure. “It is especially important from the perspective of executing high-risk projects, including the human spaceflight programme and interplanetary missions on the cards in the next five years.”

Indeed, the heights ISRO will reach in the next decade will be dictated by its new stable of launchers: variants of the PSLV, the GSLV Mk II and Mk III, and the imminent Small Satellite Launch Vehicle (SSLV). Of these, the Mk III can – and will be expected to – travel the highest.

The Wire Science@TheWireScience
4 Following 27.2K Followers
Nivedita Gupta, the head of the virology department at ICMR, has been accused of manipulating images and plagiarisi… https://t.co/wkTtT8Fl0j
8 hours ago
1 5
As we exit the pandemic phase, we must restore some of our equanimity towards microbes and regain an appreciation o… https://t.co/jdpgv5ftBZ
1 day ago
1 2
The more familiar accidents all involved civilian power plants, but even these bore military pedigrees, tracing the… https://t.co/OZP0aISKT5
1 day ago
2
We have little idea of the species that have disappeared because we would never actually contemplate their existenc… https://t.co/DIyPFHrbH8
1 day ago
2 7
As the war in Ukraine and a weaker yen hit households, a vote in Niigata will be closely watched as a gauge for the… https://t.co/ItmQbWh2Oi
1 day ago
3
Menstrual hygiene is important to ensure that we empower women and girls – and includes access to safe sanitation a… https://t.co/B5ZTqsx3Kj
1 day ago
5 4
Heavy metals in solar panels such as lead and cadmium have been known to seep out of the cells, enter groundwater a… https://t.co/HlLsxQctpw
2 days ago
4 2
There are many factors which influence the physician's approach, such as the type of training received, previous wo… https://t.co/J5m7frQe04
2 days ago
3
WHO approved the first malaria vaccine in October 2021. When COVID-19 vaccines were developed and authorised in les… https://t.co/GWK4Lik9PG
2 days ago
1 4
The presence of a healthy array of microbiota is imperative for maintaining nearly every physiologic process and to… https://t.co/oeVHc2fLTR
2 days ago
8 21
Some of the most interesting new knowledge that we have gained by putting honey bees under the scanner of logic, th… https://t.co/qvlUJh5Hby
3 days ago
1
Though rare and usually mild, monkeypox can still potentially cause severe illness. Health officials are concerned… https://t.co/S4jqWQnmoM
3 days ago
3 6
A physician practicing in a remote setting often chooses to refer patients to the next level of care, citing the po… https://t.co/JpFPE5ktSI
3 days ago
Uterine transplants for transgender women appear to be out of the ambit of both Acts that regulate assisted reprodu… https://t.co/G9QqPZCPIy
3 days ago
3
The wholesale transformation of global ecosystems, triggering mass insect declines, could be pushing the Earth past… https://t.co/jnH4ohKE2C
4 days ago
1
Contact us

Why Are We Able To Remember Something That Didn’t Happen?