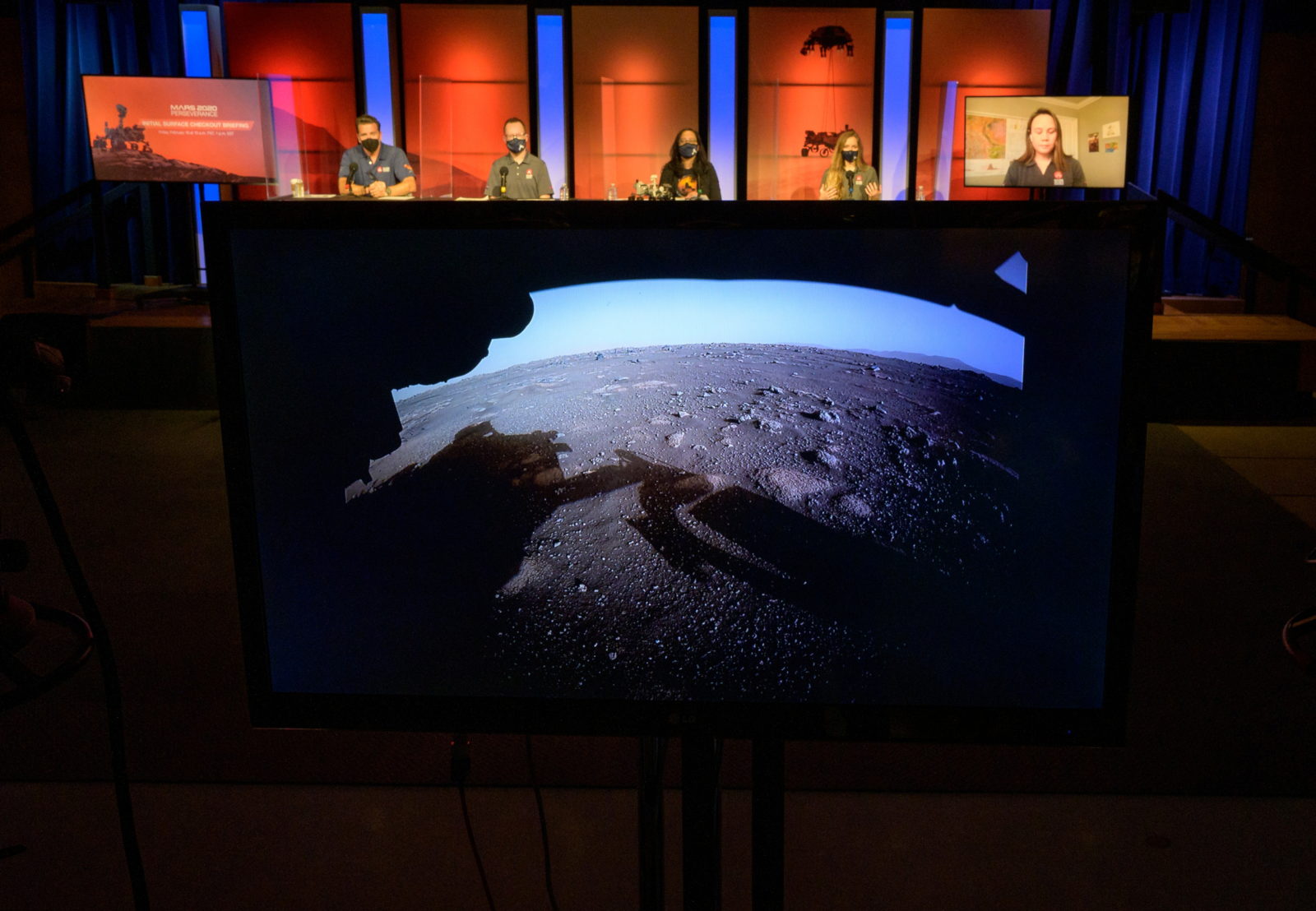 The first high-resolution, colour image to be sent back by the Hazard Cameras (Hazcams) on the underside of NASA’s Perseverance Mars rover after its landing on February 18, 2021 is shown during a NASA Perseverance rover initial surface checkout briefing at NASA’s Jet Propulsion Laboratory in Pasadena, California. Photo: NASA/Bill Ingalls/Handout via Reuters.

Los Angeles: NASA scientists on Friday presented striking early images from the picture-perfect landing of the Mars rover Perseverance, including a selfie of the six-wheeled vehicle dangling just above the surface of the Red Planet moments before touchdown.

The colour photograph, likely to become an instant classic among memorable images from the history of spaceflight, was snapped by a camera mounted on the rocket-powered “sky crane” descent-stage just above the rover as the car-sized space vehicle was being lowered on Thursday to Martian soil.

The image was unveiled by mission managers during an online news briefing webcast from NASA’s Jet Propulsion Laboratory (JPL) near Los Angeles less than 24 hours after the landing.

The picture, looking down on the rover, shows the entire vehicle suspended from three cables unspooled from the sky crane, along with an “umbilical” communications cord. Swirls of dust kicked up by the crane’s rocket thrusters are also visible.

Seconds later, the rover was gently planted on its wheels, its tethers were severed, and the sky crane – its job completed – flew off to crash a safe distance away, though not before photos and other data collected during the descent were transmitted to the rover for safekeeping.

The image of the dangling science lab, striking for its clarity and sense of motion, marks the first such close-up photo of a spacecraft landing on Mars, or any planet beyond Earth.

“This is something we’ve never seen before,” Aaron Stehura, a deputy lead for the mission’s descent and landing team, describing himself and colleagues as “awe-struck” when first viewing the image.

Adam Steltzner, chief engineer for the Perseverance project at JPL, said he found the image instantly iconic, comparable to the shot of Apollo 11 astronaut Buzz Aldrin standing on the moon in 1969, or the Voyager 1 probe’s images of Saturn in 1980.

He said the viewer is connected with a landmark moment representing years of work by thousands of individuals.

“You are brought to the surface of Mars. You’re sitting there, seven meters off the surface of the rover looking down,” he said. “It’s absolutely exhilarating, and it is evocative of those other images from our experience as human beings moving out into our solar system.”

The image was taken at the very end of the so-called “seven-minutes-of-terror” descent sequence that brought Perseverance from the top of Mars’ atmosphere, travelling at 12,000 miles per hour, to a gentle touchdown on the floor of a vast basin called the Jezero Crater.

Next week, NASA hopes to present more photos and video – some possibly with audio – taken by all six cameras affixed to the descending spacecraft, showing more of the sky crane manoeuvres, as well as the supersonic parachute deployment that preceded it.

Pauline Hwang, strategic mission manager, said the rover itself “is doing great and is healthy on the surface of Mars, and continues to be highly functional and awesome.”

The vehicle landed about two kilometres from tall cliffs at the base of an ancient river delta carved into the corner of the crater billions of years ago, when Mars was warmer, wetter and presumably hospitable to life.

Scientists say the site is ideal for pursuing Perseverance’s primary objective – searching for fossilized traces of microbial life preserved in sediments believed to have been deposited around the delta and the long-vanished lake it once fed.

Samples of rock drilled from the Martian soil are to be stored on the surface for eventual retrieval and delivery to Earth by two future robotic missions to the Red Planet, as early as 2031.

Another colour photo published on Friday, captured moments after the rover’s arrival, shows a rocky expanse of terrain around the landing site and what appear to be the delta cliffs in the distance.

The mission’s surface team will spend the coming days and weeks unfastening, unfurling and testing the vehicle’s robot arm, communication antennae and other equipment, aligning instruments and upgrading the rover’s software, Hwang said.

She said it would be about nine “sols,” or Martian days, before the rover is ready for its first test spin.

One of Perseverance’s tasks before embarking on its search for signs of microbial life will be to deploy a miniature helicopter it carried to Mars for an unprecedented extraterrestrial test flight. But Hwang said that effort was still about two months away.