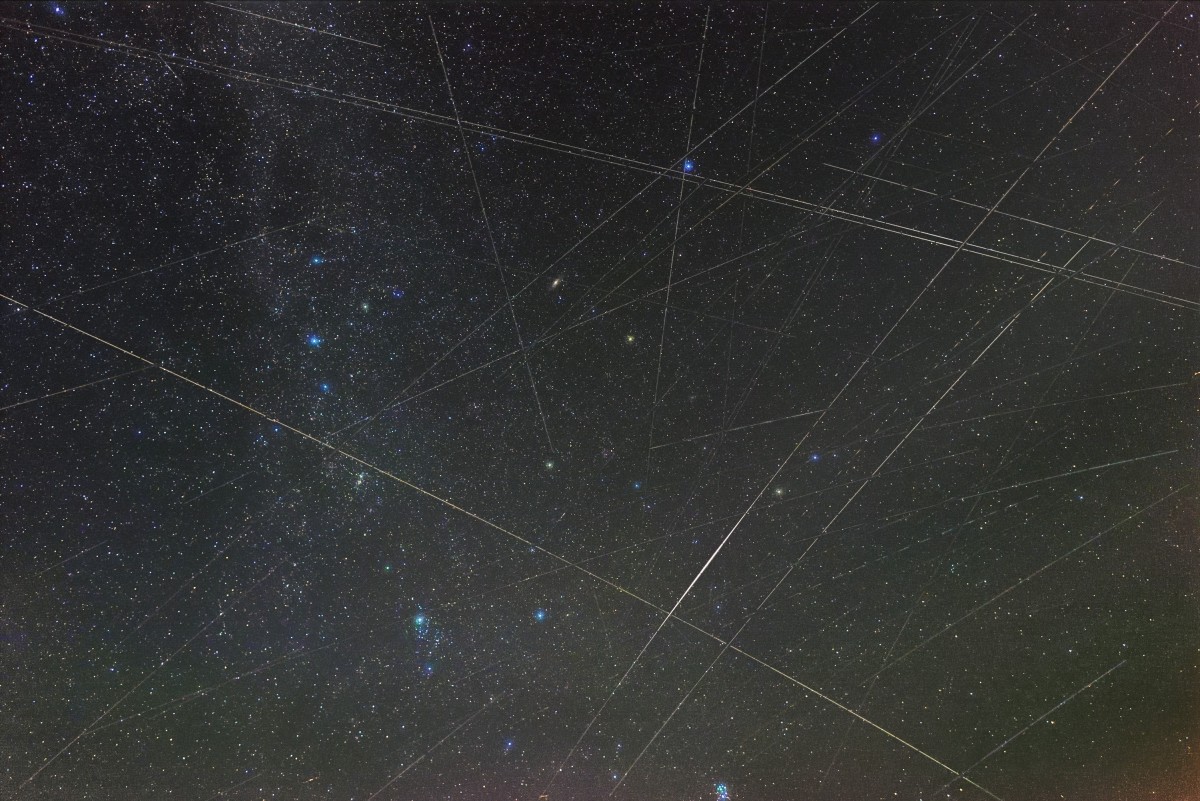 In Science, It’s Better to Be Curious Than Correct

The Starlink constellation – a project of Elon Musk’s SpaceX Corporation – is currently a network of 120+ satellites which, in the next decade, will expand to 10,000+ to provide low-cost internet from space around the world. Astronomers everywhere have been annoyed with these instruments because they physically interfere with observations of the night sky, especially those undertaken by survey telescopes with wide fields of view, and some of whose signals could interfere electromagnetically with radio-astronomy.

This is not the first time in human history that private enterprise has made use of the commons, propelled by a legacy that is the product of public efforts.

In his resourceful new book The Consequential Frontier (2019), on “challenging the privatisation of space”, Peter Ward quotes James Vedda, senior policy analyst for the Centre for Space Policy and Strategy at the Aerospace Corporation, on the expansion of the American railroad in the 19th century:

Everybody likes to point to the railroad and say that, ‘Oh, back in the nineteenth century, when all this was all being built up, it was all built by the private sector.’ Well, hold on a minute. They didn’t do it alone because they were given huge amounts of land to lay their tracks and to build their stations. And not just a little strip of land wide enough for the tracks, they were usually given up to a mile on either side. … I read one estimate that in the nineteenth-century development of the railroads, the railroad companies were given land grants that if you total them all up together were equivalent to the size of Texas. They sold off all that extra land [and] they found that they got to keep the money. Besides that, the US Geological Survey went out and did this surveying for them and gave them the results for free so that is a significant cost that they didn’t have.

Ward extends Vedda’s comments to the activities of SpaceX and Blue Origin, the private American space companies stewarded by Elon Musk and Jeff Bezos, respectively. We’re not in the golden age of private spaceflight thanks to private enterprise. Instead, just like the Information Age owes itself to defence contracts awarded to universities and research labs during World War II and the Cold War, private space operators owe their position to profitable public-private partnerships funded substantially by federal grants and subsidies in the 1980s and 1990s. It would be doubly useful to bear this in mind when thinking about Starlink as well.

When Musk was confronted with astronomers’ complaints, he replied (via Twitter) that astronomers will have to launch more space telescopes “anyway”. This is not true, but even if it were, it recalls the relationship between private and public enterprise from over a century ago. Space telescopes are expensive, relative to ground-based instruments with similar capabilities and specifications, and they can only be built with government support in terms of land, resources and funds. That is, the consequences of Musk’s ambition vis-à-vis the astronomy community – economists call them negative externalities – can only be offset by taxpayer money.

Many Twitter users have been urging Musk to placate Starlink’s detractors by launching a telescope for them but science isn’t profitable except in the long-term. More importantly, the world’s astronomers are not likely to persuade the American government (whose FAA1 issues payload licenses and FCC2 regulates spectrum use) to force SpaceX to work with them, such as through the International Astronomical Union, which has offered its assistance, and keep Starlink from disrupting studies of the night sky. But Musk or anyone else can’t deny that their private endeavours often incur costs that the gloss of private enterprise tends to pass over.

Moreover, it wouldn’t matter if SpaceX is taken to court for its rivalrous use of the commons. Without the FAA, FCC or any other, even an international, body regulating satellite launches, orbital placement, mission profile, spectrum use, mission lifetime and – now – appearance, orbital space is going to get really crowded really fast. According to one projection, “between 2019 and 2028, more than 8,500 satellites will be launched, half of which will be to support broadband constellations, for a total market value of $42 billion”. SpaceX’s Falcon 9 rocket can already launch 60 Starlink satellites in one go; India and China have also developed new rockets to more affordably launch small-sats.

A comparable regulatory leverage currently exists only with the International Telecommunications Union (ITU), which oversees spectrum use. It has awarded 1,800 orbital slots in the geosynchronous orbit, 35,786 km above sea level, to national telecom operators, such as FCC in the US and Department of Telecommunications in India. Regional operators register these slots and station telecommunication satellites there, each working with a predetermined set of frequencies.

Non-communication satellites as well as satellites in other orbits aren’t so formally organised. Satellite operators do work with the space and/or defence agencies of other countries to ensure their instruments don’t conflict with others in any way, in the interest of both self-preservation and debris mitigation. But beyond the ITU, no international body regulates satellite launches into any other orbits, and even the ITU doesn’t regulate any mission parameters beyond data transmission.

Time to get ahead

Long story short, an abundance of financial incentives, a dearth of policies and the complete absence of regulatory bodies allow private players a free run in space. Taking SpaceX to court at this juncture would miss the point (even if it were possible): the commons may have indirect financial value but their principal usefulness is centred on their community value, and which the US has undermined with its unilateral actions. Musk has said his company will work with astronomers and observatories to minimise Starlink’s impact on their work but astronomers are understandably miffed that this offer wasn’t extended before launch and because absolute mitigation is highly unlikely with 12,000 (if not 42,000) satellites in orbit.

Taking a broader view, Starlink is currently the most visible constellation – literally and figuratively – but it’s not alone. Space is only becoming more profitable, and other planned or functional constellations include Athena, Iridium and OneWeb. And contrary to Musk, other satellites have been coming in the way of observations for some time now. So it would be in everyone’s best interests at this moment to get in front of this expansion and find a way to ensure all countries have equal access and opportunities to extract value from orbital space as well as equal stake in maintaining it as a shared resource.

In fact, just as the debate between astronomers and the pro-SpaceX group has spotlighted what’s really at stake, it should also alert us to the fact that others need to participate as well. The bigger issue concerns neither astronomical observations nor low-cost internet (although an initial estimate suggests a neat $80, or Rs 5,750, per month) but of a distinctly American entity colonising the universal commons and preventing others from enjoying it. Governments – as in the institutions that make railroads, universities and subsidies possible – and not astronomers alone should decide, in consultation with their people as well as each other, what the next steps should be.

The Wire Science@TheWireScience
4 Following 27.1K Followers
Deep in the frozen ground of the north, a radioactive hazard has lain trapped for millennia. But UK scientist Paul… https://t.co/MdARrq3hhB
10 hours ago
1 1
When corals and sea anemones absorb oxybenzone, their cells turn it into phototoxins, molecules that are harmless i… https://t.co/thbxBxJTxt
11 hours ago
1 3
For a long time, scientists believed that most of the adult human brain was unchanging and that all brain cells are… https://t.co/ha5JOzCH6F
1 day ago
1 2
"We will mourn a landscape only if we genuinely love it. I was fortunate to have the opportunity to experience my h… https://t.co/OqdxiG3rYD
1 day ago
Trout is an adopted fish with a colonial past, and its introduction in the Western Himalayas infused the lives of p… https://t.co/Q2pRlyrYEM
1 day ago
2
"… what is the meaning of academic freedom when the academy is itself put to work for the benefit of an imperial po… https://t.co/BcSMnQ7yJR
1 day ago
Black holes twist spacetime itself around themselves, trap information and warp the path of light. To see a black h… https://t.co/qLo7T1zaCM
1 day ago
1
Prime Minister Narendra Modi pitched on May 12 to reform the WHO's vaccine approval procedure "to keep supply chain… https://t.co/NMRnOVC92S
2 days ago
1
Apart from the destruction they wreak, flash floods have also deposited debris like boulders, stones and sand on fa… https://t.co/MC29Ugk5Tn
2 days ago
3 1
An analysis of human bones found in an abandoned well in Punjab has confirmed that they are the remains of Indian s… https://t.co/pU4itI2CfB
2 days ago
8 19
Are you a multispecies entity, made up of some human bits and some microbial bits – or are you just the human bits,… https://t.co/gfug0isry3
2 days ago
It is a wonderful and fortunate thing for a scientist to be born during a great decisive moments in the history of… https://t.co/cRIlWY3EHU
2 days ago
3
Being carbon-neutral means balancing one’s activities such that one’s net contribution to atmospheric carbon is zer… https://t.co/xszsxMEkH9
2 days ago
In India, the threat of a large fourth wave lies either with a new variant or new recombinants with components of t… https://t.co/QcTRCIIY3N
2 days ago
The government is looking to reverse the effects of the pandemic on India’s medical education pipeline, and with th… https://t.co/XvUr3CsYpf
2 days ago
1
Contact us