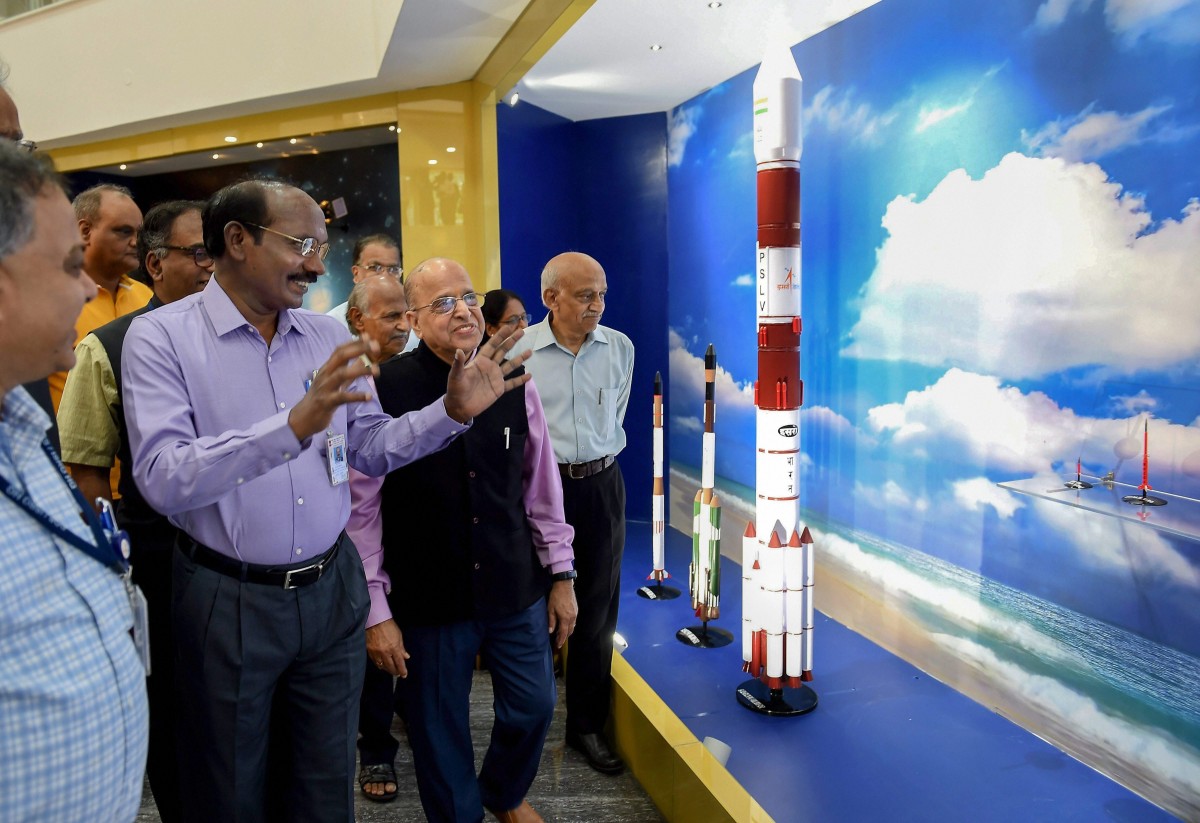 There is a fleeting remark in the BBC report about ISRO scrubbing its M1 mission (a.k.a. the Chandrayaan 2 mission) shortly before liftoff that is easy to ignore as you scan it for other details. It is an ignorant comment that multiple outlets have been parroting vis-à-vis the Indian space programme since at least 2012 (when I first came across it), and have seldom stated their sources beyond the first one or two instances. In the BBC report, it goes like this:

India’s Prime Minister, Narendra Modi, has championed the country’s space programmes, but critics would like to see poverty at home tackled first.

It is important to ask who these critics are for two reasons. First: the aside advances an illegitimate claim, and the criticism is less credible for being motivated by something other than somewhat-common sense. Second: saying what the BBC does creates a false equivalence between the political opponents of Prime Minister Narendra Modi and those who would believe that the launch is anti-poor.

To expect a government – any government – to end poverty before embarking on an interplanetary mission is absurd because, at the highest level, it views them as two standalone entities whereas they are not. Just the way money spent to reduce poverty is not the same as money given directly to a poor person to make them temporarily richer, money spent on a spacefaring mission is not money given directly to build a component for the mission. In both cases, that money represents many things.

In the first, for example, getting people out of poverty means initiating a variety of policy and infrastructural reforms that will do more than just make someone wealthier. They will contribute to a healthier lifestyle, improve access to education, social security and physical security, offer more and better jobs, etc. Similarly, the Government of India spent Rs 978 crore on realising the Chandrayaan 2 mission, and this money won’t be lost when the mission ends. Instead, scientists and engineers will have gained knowledge to improve future missions and ISRO will have initiated R&D programmes whose outcomes benefit various parts of the spaceflight value chain. In fact, Prime Minister Modi will have something new to preface his space diplomacy plans. As a result, Rs 978 crore spent on a space mission does not mean that it was Rs 978 crore that could have been spent on alleviating poverty.

Also read: It’s Time For ISRO to Reach For the (Blue) Sky

This automatically brings us to the second argument: the Indian spaceflight programme is not divorced from getting people out of poverty. Nearly the only thing India did for many decades after putting eyes in the sky was to help understand and predict the weather, monitor the consequences of natural disasters, prospect for natural resources to extract and redistribute, enable newer communication channels, and improve access to education and healthcare in remote parts of the country.

For all its flaws, there is no other Commonwealth nation with a space programme to rival India’s, and this is only so because Vikram Sarabhai, Jawaharlal Nehru and Homi Bhabha ensured it was “second to none in the application of advanced technologies to the real problems of man and society” (source) in its formative years. But if those who criticise the Chandrayaan 2 mission remain unable to see the linkages between social development and interplanetary research projects, then they also fail to acknowledge the unique nature of long-term, blue-sky research and expose themselves to be closer to the spirit of the Narendra Modi administration than they might care to admit.

The third argument is against the presumption here that the government’s budget is so tight that it has to forego work in any other areas to focus on poverty. Certain groups of activists are frequently guilty of assuming similar positions: claiming money spent on X is wrong because it could have been better used on Y instead passively manufactures an excuse for the government by suggesting that there is money enough only for X or Y, not for both. On the other hand, compare their budgets: ISRO’s entire allocation recently crossed the Rs-11,000-crore mark whereas the government spends many multiples of that on efforts to improve the quality of people’s lives. In fact, Chandrayaan 2’s budget across many years is only 0.03% of the Centre’s total annual expenditure, around Rs 27 lakh crore.

There is also a deeper prejudice here that poverty is the most important problem of them all when, in fact, it is a significant beneficiary in a very large and interconnected network of enterprises that constantly generate value for India’s economy and people. Skipping a science mission to the Moon may make arithmetic sense but it carries a large, and invisible-in-the-short-term, opportunity cost that becomes impossibly large in the long-term.

There is a fourth argument possible here, based on an American instrument called the Superconducting Supercollider (SSC), a particle collider very like the Large Hadron Collider in Europe. Particle physicists envisioned the SSC as the successor to the Tevatron (1987-2011). However, the project was called off in 1993 for a variety of reasons, one of which was its ballooning cost: from an estimated $4.4 billion in 1987 to $12 billion in 1992. When Congress finally cancelled the project, physicists assumed the money that had already been promised – a little over $2 billion – would be spent on other physics experiments being proposed at the time. It didn’t happen.

As Sean Carroll, a physicist at the California Institute of Technology, told Vox, “If you don’t spend the 20 billion on the particle accelerator, they’re not going to give it to other physicists. They never do that.” Similarly, and completely setting aside the previous arguments, it might be naïve to expect the government will spend Rs 978 crore on alleviating poverty if only the Chandrayaan 2 mission hadn’t hogged it. No; the government must spend on both at the same time, and allow advantages accruing in one sector to support the other. Otherwise, it would be like that Tamil saying, கடல் வத்தி மீன் பிடிக்கிறாமாதிரி: to catch fish by waiting for the ocean to evaporate.

The Wire Science@TheWireScience
4 Following 27.2K Followers
"… what is the meaning of academic freedom when the academy is itself put to work for the benefit of an imperial po… https://t.co/WZ5DZzjmqa
16 hours ago
Stalin recently claimed that India’s oldest Iron Age site so far is located in Mayiladumparai. However, his claim d… https://t.co/2cLzLPRHu9
17 hours ago
A physician practicing in a remote, resource-constrained setting often chooses to refer patients to the next level… https://t.co/YxpjTXtPvm
18 hours ago
2
Solar panels can last for decades if they are properly cleaned and maintained. But there is a catch. What happens t… https://t.co/uRkQLYHwW0
19 hours ago
1
The investigation into the origin of the virus has been vexed by a lack of key evidence from the outbreak’s earlies… https://t.co/La27lNlXFK
1 day ago
Limiting emissions is important, of course, but if we lose our forests, it won’t matter much. | M.R. O'Connor https://t.co/6U1h0px1G1
2 days ago
The idea of a continuity between the inorganic and the organic world, between dead and living matter, was the basis… https://t.co/adJ64B2M3U
2 days ago
1 2
Solar panels can last for decades if properly cleaned and maintained. But there is a catch. What happens to these p… https://t.co/kYSDwqGh86
2 days ago
1 7
Stalin's statement implies an intent to promote the nativism of an ancient South Indian culture that existed indepe… https://t.co/IDQbvMw6A7
2 days ago
1
Subsisting in confined, barren quarters that lack intellectual stimulation or appropriate social contact seems to t… https://t.co/XUFWQRjueg
3 days ago
1 2
The lifespans of smartphones average less than two years, a consequence of designed obsolescence. The refuse of th… https://t.co/ySa4iNW6vc
3 days ago
1
Captive elephants can display aberrant behaviour indicative of psychological trauma, including killing their human… https://t.co/DS2jitbItw
3 days ago
3
While the presence of do-nothings lowers the efficiency of their colonies, they are crucial to the survival of the… https://t.co/nCCXW2dSCm
3 days ago
Wunderkammern, or ‘cabinets of curiosity’, are the ancestors of our modern day museums. They expressed the beautifu… https://t.co/mABZvGsyIR
3 days ago
Since most spiders are cannibalistic, it’s a futile effort to try and rear them. This means that to study spiders,… https://t.co/Pa6kicAmQI
3 days ago
1
Contact us