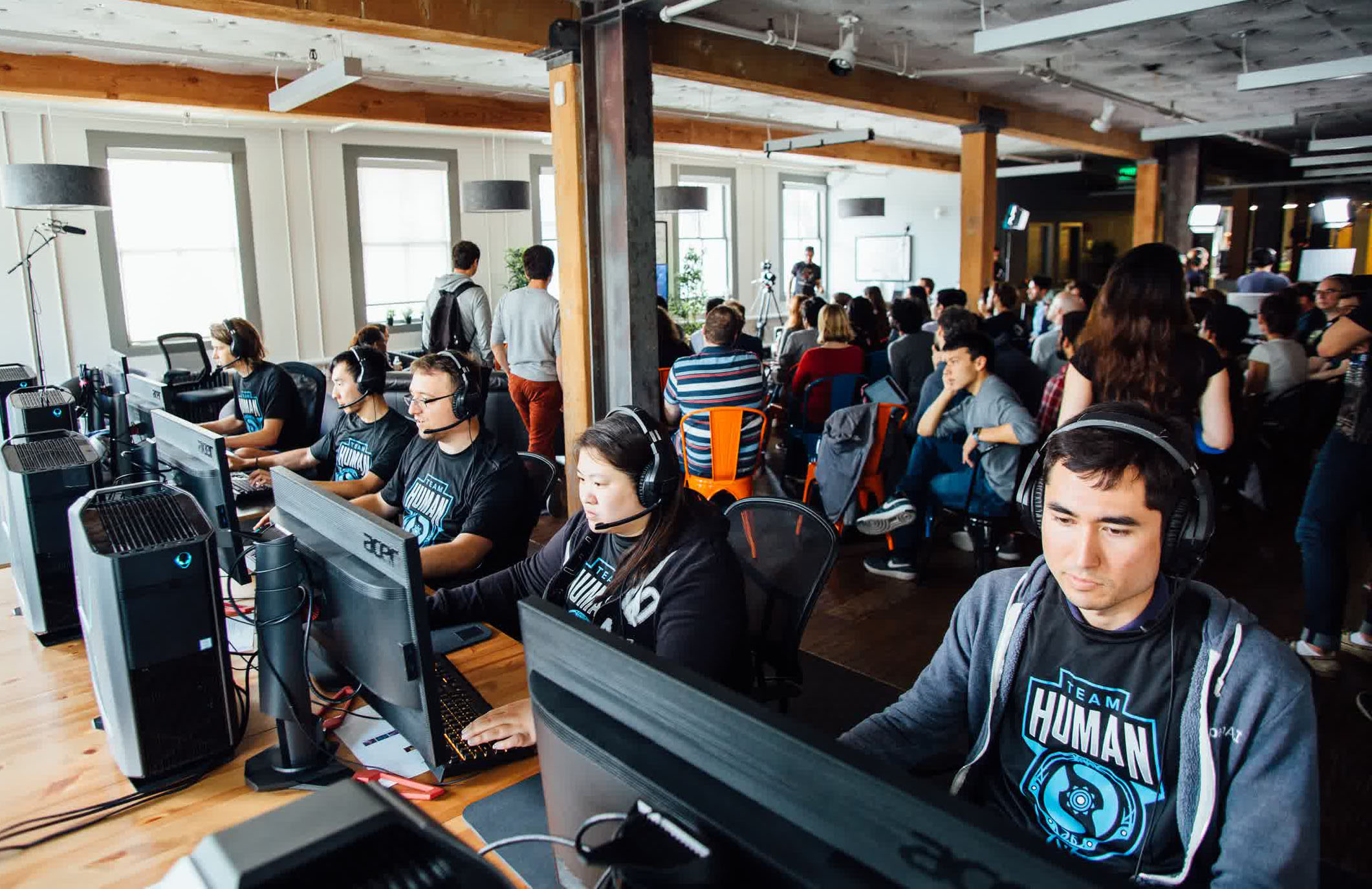 50 Years Ago: India’s First Heart Transplant in the Time of Nehruvian Science

Earlier this week, a team of neural networking algorithms beat a team of five human players at a game called DotA 2. To appreciate the real advancement this bit of news represents, together with its specific limitations, you need to understand DotA. It’ll be worth it.

DotA stands for Defence of the Ancients, a multiplayer online battle arena developed in 2003. It is played by 10 players at a time, in two teams of five. Each player has over a hundred heroes, or characters, to choose from at the beginning of the game. Each hero has a unique set of abilities and characteristics that defines their role in the team, and all of which can be augmented using items purchased and recipes concocted in-game; the gold for all this comes from killing members of the other team.

All DotA games are played on a map divided diagonally into two halves, each half protected by one team. In the two corners are the team bases, to be protected at all costs. If they’re destroyed, the corresponding team loses. The map is rough terrain riven through with three corridors: one cutting across and the other two going along the edges. Each corridor is protected by four towers – two for each team – that fire bolts of power at offending players.

In each game of DotA, players work together to take down enemy towers while protecting their own, levelling up as they gain more experience, buying items and finishing recipes, and battling other players. The whole shebang lasts anywhere from 20 minutes to a couple hours.

DotA 2 was a standalone sequel to DotA developed and published by the Valve Corporation in 2013. According to one tracker, over 471,000 players have been online (on average) every day over the last 30 days.

Unlike in chess or at Go, each DotA hero can only see what their own teammates are up to; the enemy’s actions are out of view unless the two parties engage. There are no set number of pieces that can make a fixed number of moves. Depending on which heroes have been picked, each game can progress in millions of ways. And the set of all possible outcomes of all possible strategies in all possible games is ginormous. Finally, your success depends on your teammates’ success and the team’s success depends on yours.

So when we say neural networks have beaten a human team at a game like DotA, we’re talking about a very different kind of victory than what was achieved with chess and Go. And it’s accompanied with a different set of caveats, too, that only a gamer would be able to appreciate.

The neural networks that have accomplished this feat were designed by OpenAI, the nonprofit AI research company cofounded by Elon Musk and Sam Altman. The networks’ team was called OpenAI Five (or just Five) and, according to its maker, it taught itself to win at the game by playing 180 years’ worth of gameplay against itself every day for two months.

The human opponents were semi-professionals. It’s doubtful if Five will be able to beat DotA professionals, a challenge OpenAI says it will take on in Vancouver in August this year at The International, an annual DotA 2 tournament, after further upgrades.

Beth Singler, a social anthropologist, wrote, “In computer science, games are frequently used as a benchmark for an algorithm’s ‘intelligence’.” To extend the connection, the Five’s victory is significant because problem-solving scenarios captured by DotA and other games like it closely resemble real-life problems, where long-term planning, coordination and making reactive decisions in line with the intended outcome are key.

If Five could win at DotA, then it has demonstrated an ability to tackle large and dynamic problems without having to be specifically coded for them – likely its biggest achievement in the current scenario.”There are many problems in the world that are far too complex to hand-code solutions for,” Altman wrote on his blog. “I expect this to be a large branch of machine learning, and an important step on the road towards general intelligence.”

It’s an important step indeed, but it’s also not as big as it’s being made out to be because the games Five has been winning at were limited in important ways. According to the OpenAI blog, it excels when the following rules are applied:

* Mirror match of Necrophos, Sniper, Viper, Crystal Maiden and Lich
* No warding
* No Roshan
* No invisibility (consumables and relevant items)
* No summons/illusions
* No Divine Rapier, Bottle, Quelling Blade, Boots of Travel, Tome of Knowledge, Infused Raindrop
* 5 invulnerable couriers, no exploiting them by scouting or tanking
* No Scan

The first rule says that each team’s heroes have to be those five, no others. Warding is when players plant items called wards at various points in the map to expose invisible players in its vicinity, gain vision of “fogged areas” and to negate enemy wards. Roshan is a neutral creature in the map’s centre that players can gang up on and defeat in battle to acquire uniquely powerful enhancements. The Boots of Travel item allows players to teleport across the map, inflicting damage not possible in other ways. Scan is a tool to detect the presence of an enemy unit in a given area.

Because of these restrictions, the takeaways across the board are also limited. On August 11, 2017, an OpenAI neural network beat a human player – the first victory of its kind – at DotA 2 but in a 1v1 setting, rendering the game less complex than Go. Vlad Savov wrote at the time that the bot is “still only scratching the surface of the competitive complexity of this game”. What Five has demonstrated is an ability to scratch with five fingernails at the same time – but it’s still only scratching.

For a less jarring metaphor, I turned to a friend, an accomplished software engineer and a hardcore DotA player himself, who equated the feat to a child learning to drive: “Five is no longer riding a tricycle, it’s now on a bicycle with training wheels.” The last stop is a jet-ski. He also cautioned that while a DotA puritan might call the restrictions potentially debilitating, the resulting game was still complicated enough to have resulted in notable learnings – a view other DotA players also shared in person and on Reddit.

However, even others interpreted the gameplay limitations differently, drawing attention to the fact that Bill Gates had called Five’s victory “a big deal” and “a huge milestone in advancing artificial intelligence” on Twitter. User conquer69 countered, “The restrictions are there because otherwise, the human players would win against the AI. OpenAI always want their bots to win against humans. It’s what gives them free publicity.” Anuj Srivas, The Wire‘s tech and business editor, agrees.

Bots – intelligent or otherwise – are also good at clicking, and DotA is a game that relies heavily on clicking, and pressing keys, at the right time. The Five may have a few tricks up its sleeve but its impeccable timing was certainly part of the triumph, and such timing – to use Altman’s words – doesn’t ‘capture’ usefulness. User jstock23 wrote, “If [the Five] were artificially limited to a human’s reaction time, I think it would perform worse.” So winning at DotA might not translate completely into real-world success.

It all comes down to the show the Five will put up at The International – and even then, it will be worth exercising caution about what any of the victories actually stand for. For one, OpenAI has said that the ‘mirror match’ restriction will still apply. For another, DotA – despite enabling multiple strategic modes – is similar to chess and Go because each competing player or team moves towards a victory described by well-defined values of a finite number of state variables. What happens when nobody (or nothing) is able to identify a quantitative problem to solve for?

I’ll follow Singler’s idea and be actually excited when I can play Dungeons and Dragons with a machine-borne intelligence.

The Wire Science@TheWireScience
3 Following 25.8K Followers
Another by-product of crocodile-human conflict is retaliatory killings, in which humans destroy crocodile eggs or k… https://t.co/q2oGaws1ou
7 hours ago
2
An Oxfam India report found that the average life expectancy in India was up to 69 years by 2015 but that among peo… https://t.co/CmuKUoPrY2
8 hours ago
1
More than 200 samples of genetic sequences isolated from early COVID-19 patients in China, and which had been remov… https://t.co/FJXdkXqwpk
20 hours ago
More and more climate scientists are saying that the recent extreme rainfall is a direct fallout of global warming… https://t.co/x7fnXEhHf2
21 hours ago
Existing crop of COVID-19 vaccines offer high protection against severe COVID-19, hospitalisation and deaths. We n… https://t.co/l2kbSDRT2t
22 hours ago
2
RT @shubhamsoni__: My favourite read for the fortnight is here! I read this coloumn with utmost curiosity and belief that today I am going…
23 hours ago
1
Our survival instinct ensures we fear large carnivores. The people in flood-hit Sangli, likely experienced this re… https://t.co/G3gHttBVOg
23 hours ago
1 1
Inequality in outcomes stems from inequality in access to medical services and the wider living conditions. Our un… https://t.co/SS0DKT3HZy
24 hours ago
The Supreme Court directed that the environmental clearance already granted should be kept in abeyance until the ma… https://t.co/JQhYCoeuLd
1 day ago
1
Edgar Allan Poe believed a machine could calculate, because calculation was a fixed and determinate process, but no… https://t.co/YUC3obAWDh
1 day ago
6 5
The gender disparity in India’s COVID-19 vaccine drive has narrowed, govt data showed, as pregnant women are now al… https://t.co/QBWciALE2T
1 day ago
2
Psychotherapy and imagination aren’t the only ways Deisseroth peers into the brain. Seeking answers to tough ques… https://t.co/HuOyBhFaZx
1 day ago
2 4
By the very fact of their isolation, islands permit rapid evolutionary changes and the formation of new species, al… https://t.co/RIy2eK9khZ
1 day ago
2
The government on Tuesday said that the reproductive number that indicates the speed at which COVID-19 is spreading… https://t.co/5XUSOGRWig
1 day ago
It is their yearning for friendship and sharing, even for classroom fights, and their eagerness to meet up with the… https://t.co/1GFQX2InT3
1 day ago
2
Contact us