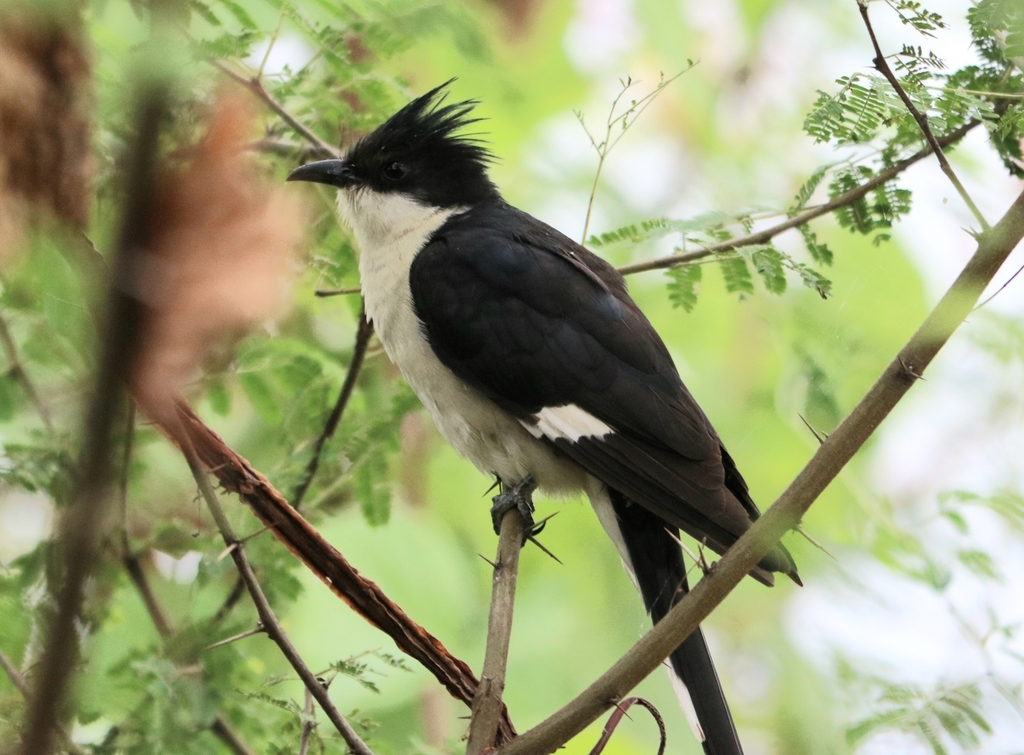 A pied cuckoo, one of the many birds at the Kazhuveli wetland. Photo: Elavarasan M./iNaturalist, CC BY-NC

Kochi: On December 1, Tamil Nadu recognised around 5,100 hectares of the Kazhuveli wetland in Villupuram district as a bird sanctuary, Times of India reported.

Conservationists have reportedly welcomed the move to notify the Kazhuveli wetlands as a bird sanctuary because it could “ensure better protection of wetlands”.

However, if the legal protection that this new status affords will protect the wetland from numerous existing threats, such as encroachment, poaching and unregulated shrimp farming, remains unclear.

The Kazhuveli, a.k.a. Kalivali, wetland is located around 18 km north of Puducherry in coastal Tamil Nadu, and is sSouth India’s second-largest brackish water wetland after Pulicat Lake.

EBird, an online global database of bird species sightings contributed by citizen scientists, lists 226 species of birds in Kazhuveli lake – which is almost half of all bird species that Tamil Nadu is home to, per the same database. According to Birdlife International, the area is also an important wintering ground for migratory birds: it is home to over 30,000 wild ducks in winter; and 20,000-40,000 shorebirds and 20,000-50,000 terns during the migration period.

The wetland retains rainwater and helps with flood control and also serves as a crucial source of drinking water for nearby villages, Sumesh Soman, the divisional forest officer of Villupuram, told The Wire Science.

The principal secretary to the government cleared the application on December 6, notifying that 5,151.6 hectares – of the around-7,000 hectares the wetlands encompass – of the wetland would now be the Kazhuveli Bird Sanctuary.

However, conservationists have been calling for more protection for the wetland – considering the biodiversity and ecosystem functions it supports as well as several threats to it over the years.

As with many other wetlands across India, ‘development’ has eaten into the Kazhuveli wetland. Seen as “unproductive and stinking” – in the words of researchers from Chennai and Chidambaram in 2017 – the wetland has been “replaced with human settlements, infrastructure development, aquaculture, agriculture, saltpan and other industrial activities and tourism development”.

In 2018, Times of India reported villagers around the Kazhuveli wetland alleging shrimp farms were discharging untreated chemical effluents directly into the lake – the lake that supplies both drinking and farming water to the area. Experts have also repeatedly flagged the use of unscientific cultivation methods by shrimp farmers in the area, including using banned feeders and antibiotics to protect shrimp from diseases, as a threat.

Poaching has been of particular concern in many wetland habitats in Tamil Nadu. A study in 2017 surveyed 27 agricultural wetlands in the district of Kanchipuram. It concluded that hunting had precipitated a sharp decline in the density of large waterbirds. However, Mongabay-India reported, this wasn’t subsistence hunting: birds are poached for the money they bring in.

The study also found that the demand for waterbirds rose drastically, with over 21,000 birds being offered for sale in markets and eateries over a period of two months. The Tamil Nadu State Wetland Authority itself admits on its website that poaching is a ‘potential threat’.

It is “most common” to see people selling birds in local markets near Kazhuveli, the Chennai and Chidambaram researchers wrote in their 2017 paper, which also looked at anthropogenic threats to the wetland. “There are a number of eateries in the nearer towns and villages that have birds [as] items in their menus to attract customers,” they added.

After inspecting the Kazhuveli wetland, as amicus curiae on a public interest litigation case relating to the Pallikaranai marshland in 2019, senior advocate P.S. Raman wrote in his report to the Madras high court that “steps should be taken to monitor and ensure that no poaching activities take place at the Kazhuveli wetland,” according to the New Indian Express.

This said, a lot of these threats have diminished in size after a National Green Tribunal order in 2016 required encroachments to be removed from the Kazhuveli wetland, said Soman, the divisional forest officer. In 2019, the Madras high court also reportedly directed the chairperson of the Tamil Nadu State Wetland Authority to ensure all encroachments are removed from wetlands, including Kazhuveli.

He also said poaching has come down as well in Kazhuveli, though it may still exist in wetland tracts, including tanks outside the bird sanctuary on revenue land. “We now have nine forest guards patrolling the area, and we will be stepping up patrolling.”

The wetland’s new legal notification as a bird sanctuary means more stringent measures will definitely be in place to deal with threats if they do rise, Soman agreed. His team will soon be mapping eco-sensitive zones in the area and preparing a management plan.

“We will also be conducting stakeholder meetings with local communities, who are mostly fisherfolk and farmers, to bring them on board, too,” he said.

The Wire Science@TheWireScience
4 Following 26.6K Followers
Mathematicians have been playing around with pattern formation equations since Alan Turing published his seminal pa… https://t.co/zwKD3DLDpp
11 hours ago
1
With a final 5-minute, course-correcting thrust of its onboard rocket, Webb reached its destination at a position o… https://t.co/nDguB9BEvV
12 hours ago
1
The operator of the Fukushima nuclear power plant said two storage tanks had leaked four tonnes of coolant being us… https://t.co/teUqYH3cZO
13 hours ago
1
Ant colonies put up with inefficient gold bricks in their midst. Did these ants perform an essential service? Did t… https://t.co/5ZMf7cZAIh
14 hours ago
Substance metaphysics lacks information about change, while process philosophers go beyond looking at the world as… https://t.co/j6FC8r5Dxc
15 hours ago
1
Only seven years after birth, the rate at which new neurons are formed in the adult human hippocampus falls by 23-t… https://t.co/uqpjwpSn35
16 hours ago
3
India's latest 'State of Forest' report continued a tradition of counting plantations and forests together as 'fore… https://t.co/zQLSP1nmjG
17 hours ago
3 3
Mutations on the LBR gene can have a wide spectrum of effects – ranging from a benign condition to a perinatal leth… https://t.co/zFJrmcaSp7
18 hours ago
Looking at the chemistry of past eruptions, the small eruptions indicate that the volcano's magma system is slowly… https://t.co/TRQMOvIiA6
20 hours ago
9 14
Cold wave to severe cold wave is very likely in isolated pockets of Punjab, Haryana, Uttar Pradesh, Maharashtra, Ra… https://t.co/exK2FupOgc
21 hours ago
The asteroid chunk was nearly 15 km in diameter and hit Earth at faster than 20 km per second – imagine a Mt-Everes… https://t.co/27X7g0r9w4
22 hours ago
The bar-headed goose's adaptations work well for occasionally spending short periods of time at high altitudes, but… https://t.co/C4lS0huGHJ
23 hours ago
Black holes have fascinated the human mind since they were first conceptualised a century ago and we have a long wa… https://t.co/bqkG4Ua2js
1 day ago
2 2
A study has found that, contrary to popular belief, human settlements in South Africa flourished in the immediate a… https://t.co/CpL22MDyLO
2 days ago
2 1
An analysis also suggests that in 54 assembly constituencies, more than 10,000 voters can benefit, and more than 50… https://t.co/f9c9Yk0Vsb
2 days ago
2
Contact us