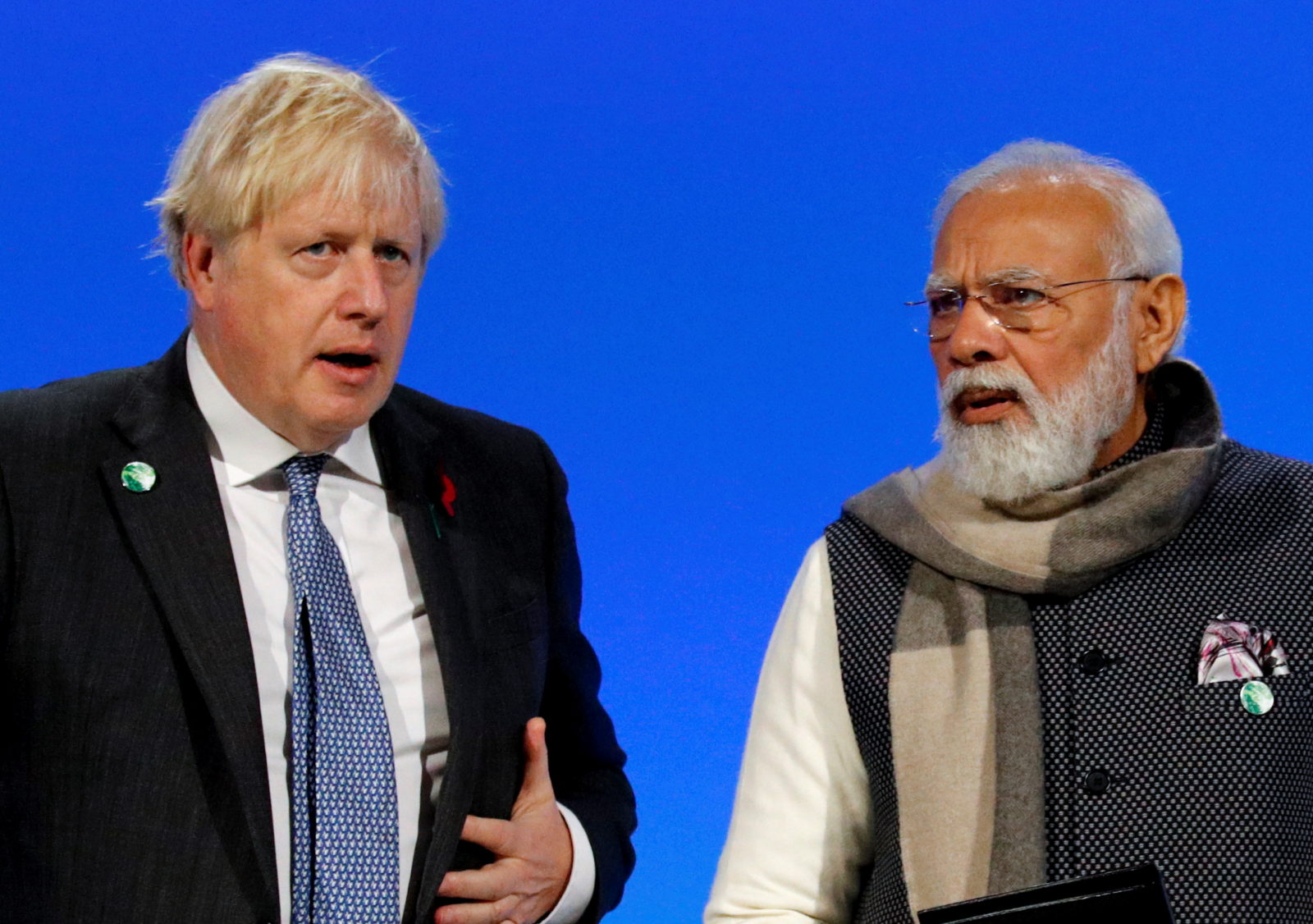 Speaking at the summit, not only did he commit India to a net-zero target, he also made a series of aggressive commitments on behalf of the country by 2030.

By the end of this decade, he said, India will meet 50% of its energy requirements from renewable energy; installed capacity of non-fossil-fuel energy in India will stand at 500 GW; emissions intensity of the country’s GDP will drop by 46-48% from 2005 levels; and that its carbon emissions will be lower by one billion tons.

The first set of responses were predictable. In global climate circles, the mood was exuberant. The last remaining piece of the puzzle in tackling climate change might be “coming into focus”, one commentator wrote.

The Indian side itself was triumphant. “We don’t just set distant targets, we deliver them,” an Indian official in Glasgow told Climate Home News.

Neither perspective, however, is wholly accurate. It’s useful instead to take a closer look at these commitments to see why.

What has Modi promised?

A good place to start is Modi’s four commitments that have a 2030 deadline. As things stand, if India meets them, it will be sizably on track towards becoming net-zero by 2070.

These commitments broadly fall into two categories. The first is that of clean energy. According to Modi, India will get 50% of its energy from renewable sources. It will also boost renewable energy’s installed capacity to 500 GW.

The second set is that of emission cuts. Modi wants to reduce the emissions intensity – the amount of emissions per unit of GDP. In tandem, he has promised to lower India’s carbon emissions by 1 billion tonnes.

These are not dramatic new commitments. In 2015, India’s nationally determined contributions (NDCs) had promised 40% of the country’s electricity from non-fossil-fuel sources, and to reduce the emissions intensity by 33-35% by 2030, compared with 2005 levels.

The significance of Modi’s statements lies elsewhere. NDCs were voluntary commitments – not binding agreements – but that is what he seems to have changed now.

Consider the first commitment to get 50% of energy from renewable sources by 2030. The day after his announcement, there was some chatter on whether he meant electricity or energy. The latter encompassed all forms of energy, and is too ambitious a target.

Lots being made of India’s commitment to get 50% of energy from renewables by 2030 – but @ClimateHome is reporting that Modi may have misspoken and actually meant 50% of electricity. Bit of a difference there #COP26 pic.twitter.com/eO9NkXqdnA

If we assume he meant electricity, India is more or less on track already. According to a January 2020 study by the Central Electricity Authority, renewables – including nuclear and hydroelectric – will sate close to 44% of India’s electricity demand by 2030.

But then Modi also committed the country to installing 500 GW renewable energy capacity by 2030.

Put these two statements together and the first set of questions arise. India’s current installed power generation capacity is 388 GW. Is power demand growing fast enough for the generation capacity to reach 1,000 GW by 2030? More basically, what rate of economic growth are these numbers based on?

Second, if India’s actual rate of growth stays lower – even if the country has committed to 500 GW of installed capacity from renewable sources – what happens to the rest of the power sector?

Third, renewables are an unpredictable source of power. The Sun doesn’t always shine and the wind doesn’t always blow. For the sake of grid stability, distribution companies (a.k.a. discoms) have thus far capped their exposure to both.

So for 50% of electricity from renewable sources, energy researcher Swati D’Souza said, India will need storage infrastructure like batteries at a great scale as well as “a highly optimised grid”.

Do we have plans for them? If so, where are they?

Now for the second set of commitments: by 2030, according to Modi, India will reduce the emissions intensity of its GDP and cut carbon emissions by a billion tonnes.

The second statement is confusing. Will India’s emissions be lower by a billion tonnes compared to what they would have been otherwise in 2030? Or is the country offering to shave a billion tonnes off its emissions between now and 2030? As D’Souza said, we need to wait to see what India’s updated NDCs will say.

Even if we assume Modi meant a reduction of one billion tonnes from the projected trajectory for 2030, questions abound.

There are two ways to pare a billion tonnes off that number. The first is to use carbon sinks, like forests – but the math doesn’t add up here. Going by forestry websites, over a lifetime of 100 years, a tree can capture one tonne of carbon dioxide. To capture a billion tonnes of carbon dioxide, India will need as many trees. Even assuming 500 trees an acre, that works out to 20 lakh acres – an area about the size of Tripura, every year.

(This is setting aside considerations about the kinds of trees, the ecological characteristics of their immediate surroundings and the ideal age at which their carbon sequestration capacity matures.)

The second way? India can decarbonise specific sectors to shave off the billion tonnes. At this time, the country’s biggest emitter is its thermal power sector, followed by industries like steel-making, transportation and, to a lesser extent, livestock, rice cultivation and landfills, and so forth.

Here, the government could ask the automotive sector to switch entirely to electric vehicles or tell sectors like steel to go green – either by switching to clean fuels like hydrogen or to decarbonise themselves through carbon sequestration. Such transformations, announced almost overnight and without preexisting pathways for energy transition, will come with a lot of collateral damage. Smaller firms in the value chain might not make the switch at all.

Modi’s ‘Panchamrit’ speech at COP26 had two parts: India’s new commitments and the economically developed nations’ climate finance promises. Modi also asked them to pledge $1 trillion to fund other countries’ climate adaptation and mitigation plans. However, the problem with the new Indian commitments run beyond the financial transfer itself.

Firms might find themselves outmoded: electric cars, for instance, need fewer components than ones using internal combustion engines. Technologies like carbon capture are also expensive and haven’t yet been implemented at scale. As the UK-based carbon sequestration firm Carbon Clean’s Asam Rafi told this reporter earlier, they require strong policy support to be viable.

That architecture – with incentives like carbon credits that reward investment in carbon capture – is still lacking in India.

On the whole, a lot remains unclear about Modi’s new commitments.

That is not all. Until a year ago, the Government of India was telling us that gas would account for 15% of India’s energy mix by 2030 – and that oil demand would double in this period. As recently as October 2021, it was telling us that coal couldn’t be wished away, and was trying to auction off coalblocks. And as recently as four days before Modi’s address in Glasgow, Union environment secretary R.P. Gupta had said India wouldn’t be forced into announcing a net-zero target.

The prime minister’s announcements at Glasgow violated each of these statements.

As a result, a bunch of firms that trusted these statements will lose money. The country’s past refusals to consider net-zero – and its repeated references to differentiated responsibility instead – have resulted in few sectors, if any, having had the necessary energy transition pathways in place. But now, they are about to be thrust into a programme of fast-forward decarbonisation.

We also don’t know who will invest in this 500 GW of renewable energy. For example, as this correspondent has written, discoms are stopping India’s rooftop solar from growing and – between a ‘Make in India’ push and hiked GST rates – the cost of the equipment for ground solar is rising.

That is the calculus of this moment. The government has made large commitments – and we don’t know if India is ready for them.

M. Rajshekhar is an independent reporter studying corruption, oligarchy and the political economy of India’s environment.