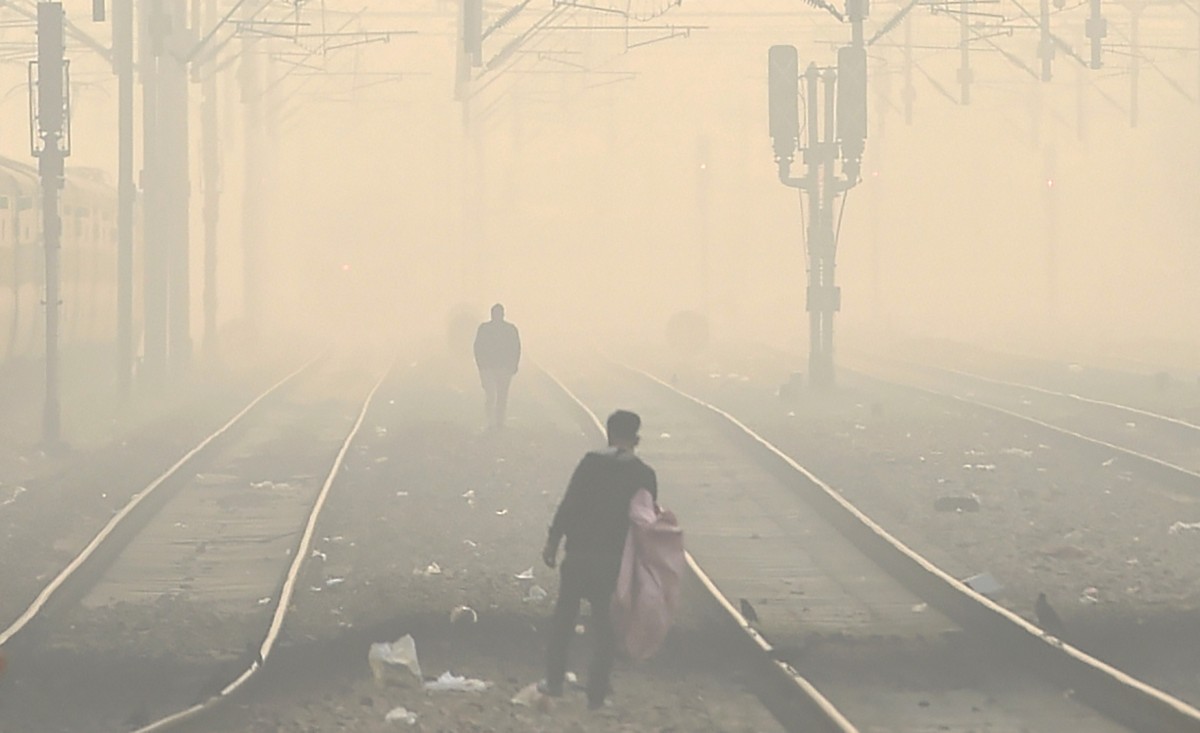 New Delhi: The air in Delhi and surrounding areas hung heavy with acrid smoke as people burst firecrackers on Diwali in a blatant disregard to the government’s ban on it amid a sharp increase in fumes from farm fires.

Continuing its upward trend, the city’s air quality index, which stood at 382 at 4 pm, entered the severe zone around 8 pm as low temperature and wind speed allowed the accumulation of pollutants. On Friday morning, the situation was even worse – according to NDTV, PM 2.5 concentration was 999 at the city’s Jawaharlal Nehru stadium.

Gufran Beig, the founder-project director of SAFAR, said the PM2.5 pollution shot up rapidly on Friday early morning with the AQI even crossing the 500 mark. SAFAR expects the air quality to remain in the ‘hazardous’ or ‘severe’ categories on Friday, the Indian Express reported.

People from several parts of the city and its suburbs complained of itchy throat and watery eyes, as a layer of smog, the first episode this season, lingered over the region.

Residents of Lajpat Nagar in South Delhi, Burari in North Delhi, Paschim Vihar in West Delhi and Shahdara in East Delhi reported incidents of firecracker bursting as early as 7 pm, despite the blanket ban in the national capital till January 1, 2022.

A substantial dip in cracker bursting in the evening seemed a break from tradition. But it did not take long for the sound of explosions to pierce the silence, a resident of Kailash Hills said.

Delhi government has banned the bursting and sale of all firecrackers, including green crackers. pic.twitter.com/Y9G473JYVr

Several incidents of high-intensity cracker bursting were reported from Gurgaon and Faridabad.

The Haryana government has also imposed a ban on the sale or use of all kinds of firecrackers in 14 of its districts in the National Capital Region, while curbs were put in other parts.

Early in the day, the city reported its first episode of fog, which lowered visibility at the Indira Gandhi International Airport and the Safdarjung Airport to the range of 600-800 metres.

It continued to remain in the poor range of 800-900 meters throughout the day due to calm wind conditions, senior IMD scientist R.K. Jenamani said.

The first episode of smog coincided with the share of farm fires in Delhi’s pollution increasing to the season’s highest of 25%.

According to SAFAR model forecasts, stubble burning share may increase to 35% on Friday and 40% on Saturday with the wind direction changing to northwesterly.

Northwesterly winds carry smoke from farm fires in Punjab and Haryana towards the national capital.

Relief is expected only from the evening of November 7 but AQI will fluctuate within the ‘very poor’ range, the air quality forecast agency said.

Last year, the share of stubble burning in Delhi’s pollution had peaked at 42% on November 5. In 2019, crop residue burning accounted for 44% of Delhi’s PM2.5 pollution on November 1.

The contribution of stubble burning in Delhi’s PM2.5 concentration was 32% on Diwali day last year as compared to 19% in 2019.

On October 27, the Delhi government had launched the ‘Patakhe Nahi Diye Jalao’ campaign to create awareness against the bursting of crackers. Under the campaign, action can be taken under relevant IPC provisions and the Explosives Act against anyone found burning crackers.

According to the government, more than 13,000 kg of illegal firecrackers have been seized and 33 people arrested so far under the anti-cracker campaign.