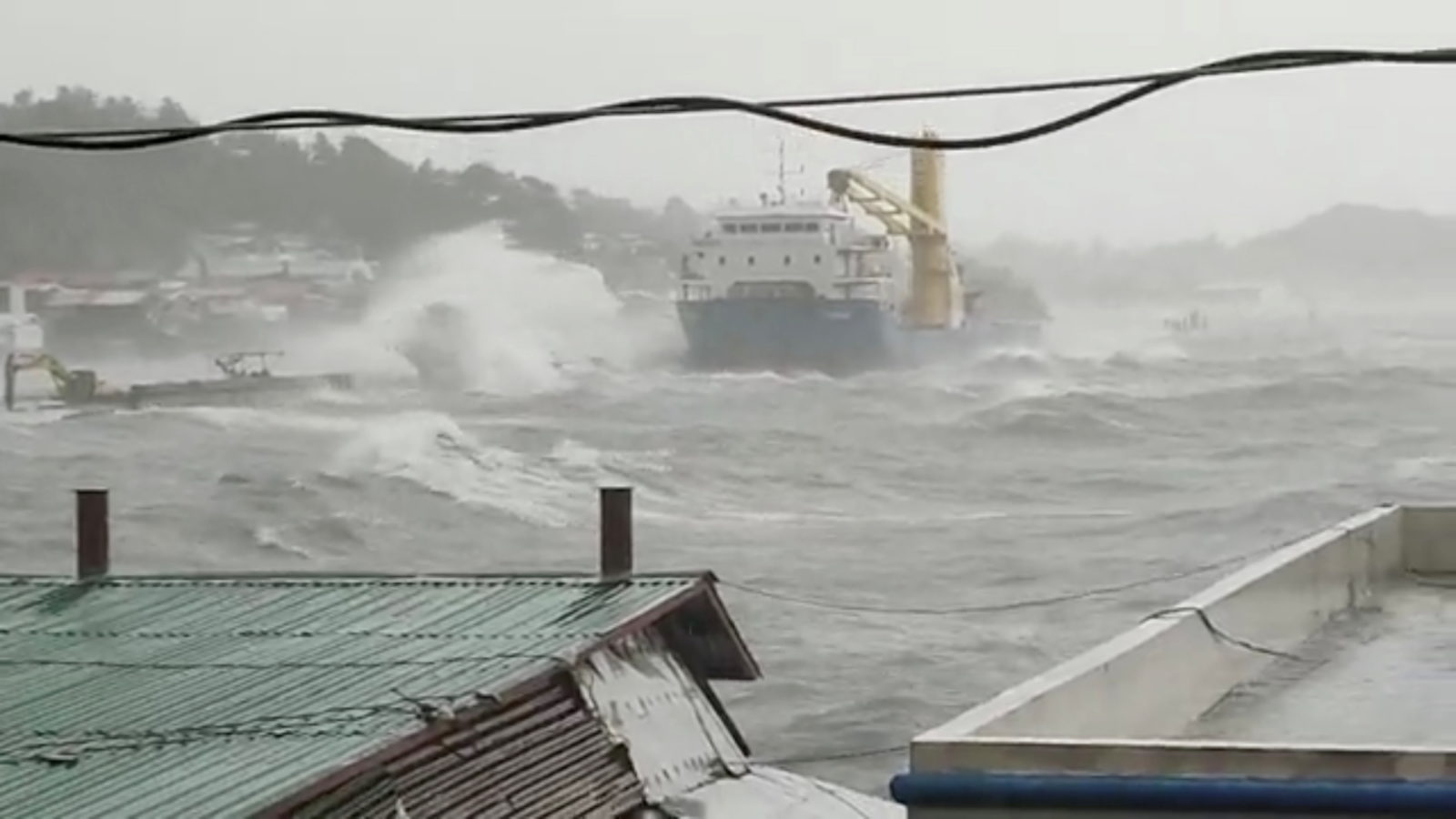 Waves crash the shore as Super-typhoon Surigae moves close to the Philippines in the province of Catbalogan, April 18, 2021. Photo: DJ RJ Rene Castino/Reuters

Sydney: A tropical cyclone on Australia’s west coast destroyed several homes and cut electricity to tens of thousands of people overnight before weakening on Monday morning.

Officials said around 70% of the structures in the coastal town of Kalbarri, about 500 km north of state capital Perth, had sustained damage when the category three storm made landfall late on Sunday.

Around 40% of the damage was “major”, WA Emergency Services Commissioner Darren Klemm said.

No deaths or major injuries have been reported.

A recovery effort is now underway as the biggest threat has passed, McGowan said. There are 31,500 customers still without power supply, which he said could take days to restore.

Tropical cyclone Seroja was downgraded after making landfall to a category two system and was later downgraded further to a tropical low, but bringing heavy rain and strong winds.

The region was on high alert for the storm, given that houses and other buildings were not built to withstand tropical cyclones, which usually do not push so far south.

“This is a rare weather event for people in southern and eastern parts of WA,” the Bureau of Meteorology said.

Meanwhile, strong winds and high waves lashed the eastern Philippines on Monday as the strongest typhoon ever recorded in April barrelled past in the Pacific Ocean, killing one man and triggering flooding in lower-lying communities, disaster officials said.

The national weather bureau issued a severe wind and heavy rainfall warning on Monday, saying “destructive typhoon-force winds extend outward up to 110 km from the centre of the storm“.

More than 100,000 people were evacuated from coastal areas, according to provincial disaster agencies. Reuters also quoted the Philippine coast guard saying a cargo ship with 20 crew, nickel ore and around 2,000 litres of diesel ran aground off the southern province of Surigao del Norte.

The core of Typhoon Surigae, or Bising as the storm is known locally, is not expected to hit land. But with a diameter of 500 km and winds reaching 195 km per hour, parts of the eastern islands of Samar experienced flooding, while several communities lost power.

This is the first super-typhoon of 2021, and it foreshadows a busy storm season for the region in the year ahead, experts say.

“Early indications are that the 2021 typhoon season will be at least average in activity, and possibly above average,” US meteorologist Jeff Masters wrote in a post on Yale Climate Connections’ website, which reports daily on climate conditions.

Atmospheric scientists say data shows that storms, called typhoons, cyclones or hurricanes in different parts of the world, are getting stronger because of global warming.

“The fuel for these storms is warm oceans,” said Anne-Claire Fontan, a scientific officer at the World Meteorological Organisation based in Geneva.

“The global trend is that they are getting stronger, and a higher percentage of total storms will be stronger.”

A warmer atmosphere holds more moisture, allowing gale force winds to dump more rain. In particular, water temperature in the western Pacific Ocean is higher than the global average, making it fertile ground for mega storms like Surigae. The region sees more storms than any other part of the world, more than 70% of which develop at the peak of the season between July and October.

Disaster officials said a 79-year old man from Southern Leyte province in the Philippines was confirmed dead after he was hit by a fallen tree and one person was missing.

The Philippines sees around 20 tropical storms annually. Last year, the strongest typhoon of the year, Goni, hit the country with gusts of up to 310 km per hour, killing 25 people and forcing the evacuation of more than 345,000.

Taiwan, meanwhile, is hoping the storm brings much-needed rain to alleviate a drought, with people taking to social media to welcome it. However, it is expected to veer away from Taiwan out into the Pacific, bringing rain only to the northern part of the island later this week.