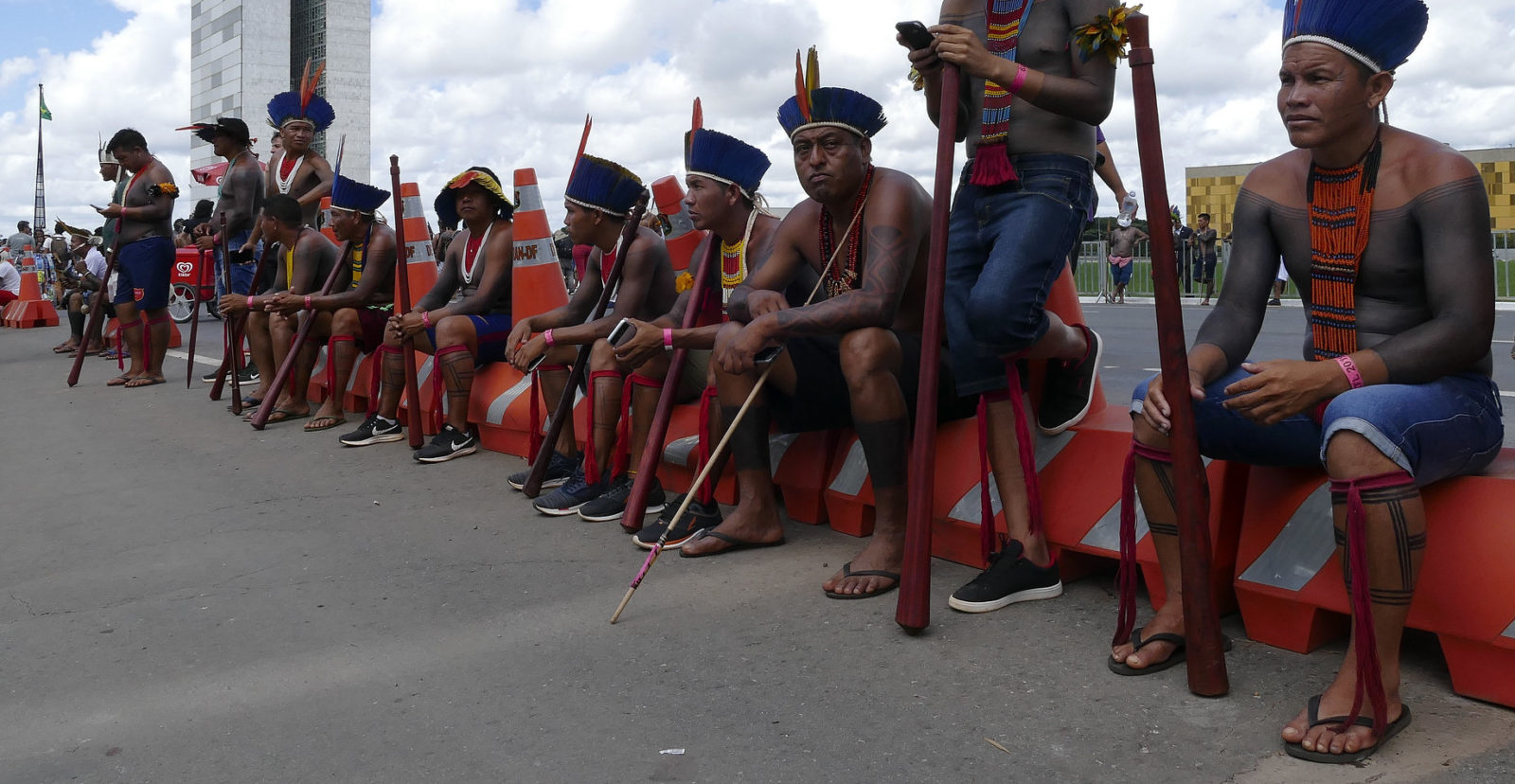 ‘Environmental defenders’ are those individuals whose lives and livelihoods are at risk due to environmental change. Such defenders could be members of indigenous communities, peasants, fisherfolk, activists and journalists, among others.

The study provides specific details about the risk different people assume in their role as defenders, and the results could be used to inform the kind of protections they need most.

For example, according to the researchers, environmental defenders are usually members of vulnerable groups that act in collectives and largely use non-violent forms of protest. Their principal threats are criminalisation (20% of cases), physical violence (18%) and assassination (13%).

But as the study notes that assassination is the most visible manifestation of direct violence, there are other forms to social, political and economic structures that lead to discrimination and inequality – and therefore comparably dangerous as well. There’s also cultural violence, whereby offenders use religion, language and ideology to legitimise violence, and slow violence, like exposing people to water and air pollution.

“This global trend of conflicts with indigenous presence being disproportionately met more with violence is true for India too,” Brototi Roy, one of the study’s authors and a PhD scholar at the Institute of Environmental Science and Technology (ICTA), Autonomous University of Barcelona, told The Wire Science.

Indigenous communities are often the victims because their lands are conceived as being ‘unused’ in terms of resources as well as because, “historically, they have been considered as the ‘other’,” Roy said. “This a structural problem.”

“The Adivasis fighting mining in their territories in Odisha and elsewhere have routinely faced violence,” said Madhu Sarin, a rights activist and a member of the group that drafted the Scheduled Tribes and Other Traditional Forest Dwellers (Recognition of Forest Rights) Act 2006.

“The EJ Atlas is a really powerful resource for highlighting issues around violence, at a global scale,” said Nathalie Butt, a postdoctoral research fellow at the School of Biological Sciences, University of Queensland. Noting – as the paper also acknowledges – that the instances of violence are likely an underestimate, she said her own research has revealed that “maybe only half the deaths of environmental defenders [have been] recorded. But as long as this is acknowledged, I think that the analyses are robust.” Butt was not involved with the study.

And based on these analyses, Roy and her peers reported that over 90% of protest-forms the defenders had employed were non-violent. Of these, 58% involved petition campaigns, 57% involved public campaigns, and 56% involved street protests.

While strikes at and boycotts of companies and products, and refusal of compensation, were considered relevant forms of non-cooperation, especially in urban areas, the study’s paper noted that “they appear globally only in up to 10% of all cases”.

In cases where protests turned violent, the researchers noted that property was damaged in 7% of all instances, and sabotage and threats to use arms featured in 3% of cases each.

All together, defenders’ protests had the desired effect 11% of the time. “Most movements are not successful,” Roy said. “Take the Narmada Bachao movement – where, in the end, the dam got built even after 30 years of protest.”

However, these failures are less a reflection of mistakes the defenders make and more of the power structures they’re up against, like crony capitalism. “How much social power do the defenders have?” Roy wondered.

“As is pretty much the case everywhere, First Nations and indigenous people have historically had no political or economic power or representation, so [they] are easy to overpower,” Butt said. Drawing from examples in Brazil, she said protest methods usually include the defenders putting themselves physically in the way of those who want to remove or hurt them. However, she continued, there isn’t much they can do against weapons (like guns), the police and machines.

However, the study did note that defenders’ chances of success leapt to 27% when they combined strategies of preventive mobilisation, diverse protest methods and litigation.

Indeed, the paper singled out legal action as an effective strategy: the analysis found that 34% of cases taken to court ended on a happy note and only 18% flopped.

This, the researchers write, suggests “many conflictive projects do not develop in compliance with prevailing laws as well as social and environmental standards,” so “the need for enhanced monitoring and accountability of corporate and state-led resource use projects” is great. They also note that an effective way to support environmental defenders would be to improve their access to justice.

“In the EJ Atlas, we divided conflicts into ten different categories, but more or less all conflicts broadly fall under land conflicts,” Roy said.

The Delhi-based  organisation Land Conflict Watch (LCW) mapped 703 land-related conflicts going on around the world over three years, and published its results on February 28. They indicate that infrastructure development, led by real-estate schemes and road and irrigation projects, have motivated the most land conflicts (43%), followed by conservation and forestry-related activities (15%).

Importantly, the results also mirrored that of the new study: that marginalised communities – such as tribes and those living in resource-rich but violence-afflicted areas – are disproportionately more affected by land and resource conflicts.

Also read: The Dreamtime, Science and Narratives of Indigenous Australia

Article 244 of the Indian Constitution designates some areas in the country as Fifth Schedule Areas. These are typically small, have a mostly tribal population and are economically quite underdeveloped. The LCW study noted that people in these areas are more affected by land conflicts, specifically those involving mining.

A quick summary of Fifth Schedule Areas from the study follows:

* Account for 41% of the total area impacted by land conflicts

The Forest Conservation Act mandates afforestation in non-forest or degraded lands in cases where forest land is diverted for non-forest purposes, like mining and road-building.

“In most cases, the lands used for compensatory afforestation are common lands or community lands, including shifting cultivation lands and grazing lands,” Sarin noted. “These are notified as forest lands and handed over to the forest department for afforestation. People completely lose access to their customary commons in the process.”

According to her, many of India’s protected areas were originally tribal lands that became re-designated as protected areas due to their good forest cover and wildlife population. As a result, their original inhabitants were dubbed encroachers and evicted without proper rehabilitation.

“One of the ways to ensure these conflicts don’t occur is to have a decentralised approach, where you really listen to what the gram sabha is saying, to involve all the stakeholders in decision-making,” Roy said.

For example, Roy continued, if you are setting-up a thermal power plant by taking over land from indigenous people, you must ask: “Is this [plant] what they really want? And for whom will the power be produced? These questions should be central to the decision-making process.”

The authors of the study state in conclusion that no amount of economic development can do away with environmental conflicts given these conflicts are “embedded in global economic structures that require continuous resource extraction.”

A study published in August 2019 in Nature Sustainability, with Butt as one of the authors, investigated the drivers of environmental violence in an attempt to identify who may be most at risk. “Many extractive industries implicated in these conflicts are linked to international networks,” Butt said, citing the examples of Shell in Nigeria and Coca Cola in India.

Also read: More Than 1,700 Activists Have Been Killed This Century Defending the Environment

Many conflicts are driven by growing demand in developed countries. “Our idea in the paper was that if consumers are aware of exactly how the goods they are buying are sourced, then they will vote with their wallets and avoid buying things produced in conflict,” Butt explained. “We have seen this work in the case of markets such as those for sustainably sourced timber, conflict-free diamonds, etc.”

She added that international legislation, like that currently in place for trade in endangered species, could perhaps be the first step in ensuring non-violent supply chains.

But as with all crises motivated by capitalism in the 21st century, consumerism is one of the few ultimate causes of trouble.

“If you keep trying to grow the economy, you keep going into new commodity frontiers, you keep wanting to build things, to extract resources in places with high biodiversity, with indigenous presence… The conflicts will not [reduce],” Roy said. “What is required is a change in the way we understand ‘development’ and what a good life is.”