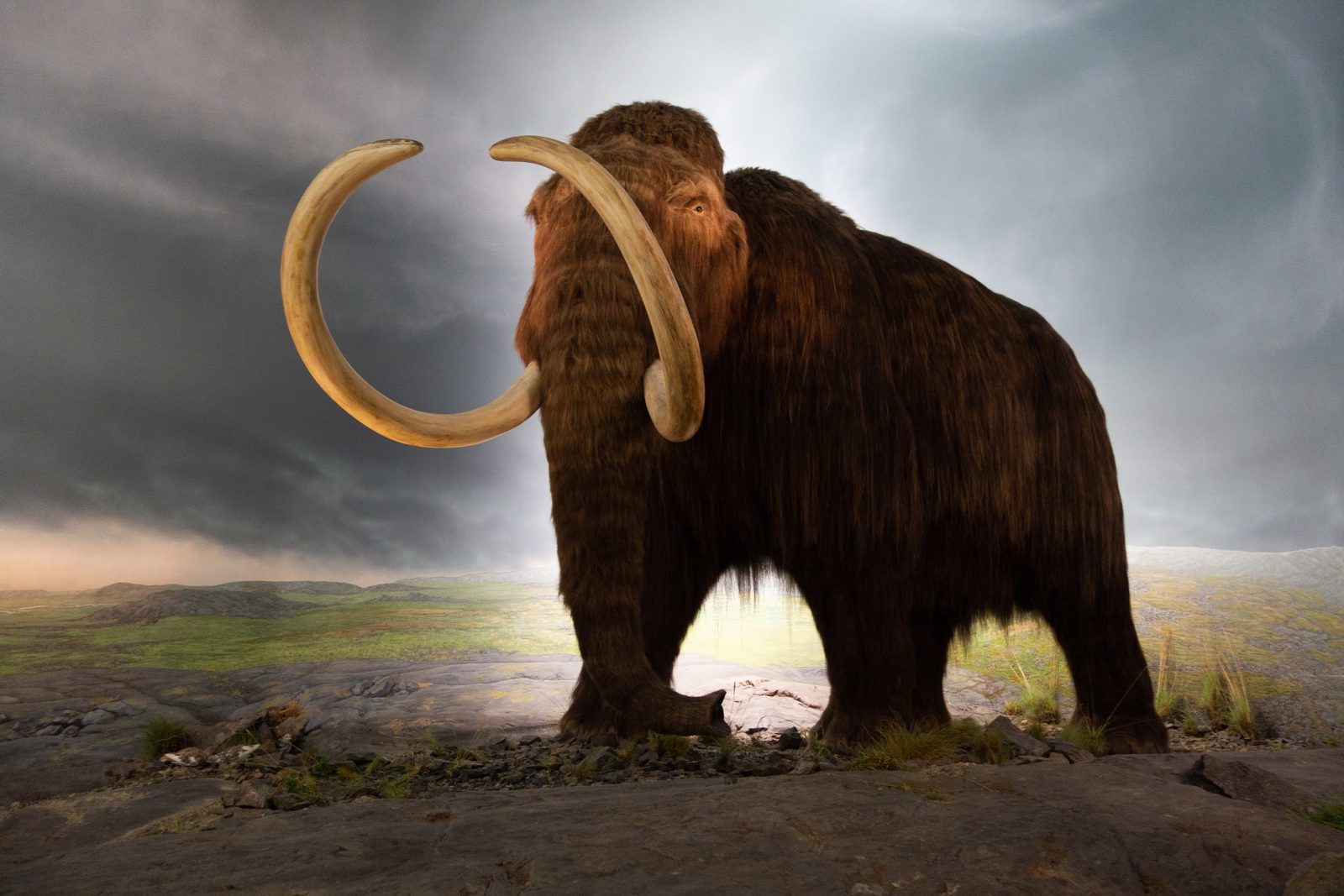 An illustrated recreation of a woolly mammoth, on display at the Royal Victoria Museum, British Columbia. Credit: Thomas Quine/Flickr, CC BY 2.0

From ‘Scientists Say They Could Bring Back Woolly Mammoths. But Maybe They Shouldn’t’, published by NPR on September 14, 2021:

Flush with a $15 million infusion of funding, Harvard University genetics professor George Church, known for his pioneering work in genome sequencing and gene splicing, hopes the company, in the bold words of its news release, can usher in an era when mammoths “walk the Arctic tundra again.” He and other researchers also hope that a revived species can play a role in combating climate change.

To be sure, what Church’s company, Colossal, is proposing would actually be a hybrid created using a gene-editing tool known as CRISPR-Cas9 to splice bits of DNA recovered from frozen mammoth specimens into that of an Asian elephant, the mammoth’s closest living relative. The resulting animal — known as a “mammophant” — would look, and presumably behave, much like a woolly mammoth.

The article then discusses the potential of Church’s project to “help reverse climate change” (no evidence), “help endangered species” (may be more worthwhile to keep existing elephants from going extinct), “upset existing ecosystems” (likely, since the tundra has changed to adapt to a world without mammoths) and, finally, its potential to fail.

The point of ‘upsetting existing ecosystems’ is particularly interesting because it invokes the parallel idea that species reintroduction or revival1 is a form of climate geoengineering. Church’s ideas about woolly mammoths have an antecedent in the ideas of controversial Russian geoscientist Sergey Zimov (the two met in 2013). Zimov has set up a 160-sq.-km protected-area called the ‘Pleistocene Park’ in the country’s northeastern Sakha Republic. Here, he and his son plan to reintroduce the megafauna that roamed the tundra during the Pleistocene epoch, 2.6 million to 10,000 years ago.

We already know that ecosystem changes can cascade faster and wider than the most agile economies can adapt, and unless Church or the Zimovs have a way to predict what these changes could be, we could just as easily be in for even more trouble. There was already an indication in 2017 that Sergey’s son Nikita plans for more parks like his dotting the land above the Arctic circle to contain the ‘pristine’ grassland, and its artificial ecosystem of predators and prey, while waving away concerns about getting in the way of people.

For another example, the Colossal website says, unironically: “The loss of these large cold-tolerant mammoths over the past 10,000 years has stripped [the tundra ecosystem] of the grasslands that once efficiently absorbed carbon. Instead, there are mossy forests and wetlands, which aren’t as helpful with combating rising temperatures.”

So Church et al. have determined that reducing Earth’s surface temperature is an end that would justify any means, and have decided to destroy forests and wetlands. I doubt very much that they, and the continuum of ecosystems of which they are part, will vanish without triggering their own spiral of consequences.

Also read: World Wetlands Day: What Is a Wetland, and Why Does India Need so Many?

Second – and continuing from the first – when mammoths or ‘mammophants’ walk the Arctic tundra, how will their presence affect the people, the plants and the animals in the tundra, far from Colossal’s facilities in Massachusetts or Texas, and quite removed from the jurisdiction of the American government?

I’m reminded of many Tamil Nadu environmental activists’ allegation that the Indian government is ‘out to get them’ by choosing to locate large, resource-intensive and sophisticated projects (“you couldn’t possibly understand what’s going on here so don’t ask”) in the southern state instead of somewhere else. The India-based Neutrino Observatory was sunk partly because the activists, political leaders and the people at large have been distrustful of its overseer, the Department of Atomic Energy, which already operates two major nuclear-power facilities in the state. One of them has been ceaselessly controversial.

Urban India is power-hungry, sure, but most of our power sources are located well outside cities, in rural areas, where we expect them – the people who live there – to transform their lives to make way for power plants, science projects and whatnot. Is this going to be the case, by and large, with species reintroduction projects also? That we dream up strange animals with the tools of science and install them without checking with the lakhs of people – Indigenous and otherwise – that will have to live around these creatures, who will be forced to adapt to significant ecosystem changes, while we monitor their lives from afar with drones and satellites.

This is the principal issue with climate geoengineering. Say the UAE seeds its clouds for more rain, to cool Abu Dhabi and Dubai so that they remain attractive tourist spots. But the rain happens to be intense over the deserts of UAE as well, where the unusual availability of water encourages more locusts to breed, swarm and fly out into Pakistan and North India. There, they lay waste to many tonnes of crops, drive families further into poverty and cripple multiple local economies. Will the UAE check with India and Pakistan before the next round of cloud-seeding, and/or pay for damages already caused?

It should, but international instruments that could require such consultation or compensation are set back by the absence of some or all of the following issues: lack of focus on specific forms of geoengineering, deliberation on “liability and compensation regimes” put off for a future date, interpretation by countries (and especially proponents of geoengineering) in different ways, and, of course, lack of a means to verify enforcement. (Thanks to Prakash Kashwan for inputs.)

Also read: Shifting Our Gaze – Towards a Just, Inclusive Approach to Research in the Field

The locust example is also of a relatively well-understood series of events that plays out above-ground and over a year or two. Did you know that there is a global circulation of ocean waters, called the Great Conveyor Belt, that affects the timing and intensity of the monsoons over India? Changes in the ocean are slow but not ‘forgetful’: if one country or a group of countries tinkers with the wind and the water in their part of the world for a short-term gain, other countries halfway around the planet could have to deal with the long-term fallout a decade later.

To quote Prakash Kashwan, writing in The Wire Science in December 2018: “despite a lot of progress in recent years, we don’t know enough to support a full assessment of the intended and unintended effects of geoengineering.”

Kashwan also wrote, in the same article, that scientists have tended to frame solutions to climatic problems in terms of the one hammer at their disposal – geoengineering – and have forestalled “other equally valid alternatives”. As a result of this and other biases, “some ‘high-level’ scientific pronouncements have assumed stewardship of climate geoengineering in the absence of other agents” and that, Kashwan continued, “such technocratic modes of governance don’t enjoy broad-based social or political legitimacy”.

The same is true of Colossal and its ‘mammophants’. The company webpage dedicated to this animal lists “10 core truths for reviving the mammoth” that together read like a defence of the ruinous fortress-conservation model, which rejects human presence as a ‘disturbance’ sans any critical inquiry. In India, it has been hijacked by private and political interests, perpetuating colonial attitudes against Indigenous communities that have co-evolved with, and many of which have protected and have been protected by, the so-called ‘wild’. In fact, the ‘mammophant’ page doesn’t even mention humans – leave alone words like ‘people’ and ‘rights’ – except to invoke the Moon-landing, ecosystem destruction and George Church’s eminence. (Thanks to Neha Sinha for inputs.)

Mammoths started to go extinct 14,000-10,000 years ago, whereas we’re grappling with the effects of human activity since the start of the industrial era, some 250 years ago. Global warming really got underway in the same time we began to fetishise industrialism and urbanisation, as the exploitative mores of capitalism ripened – not because we had mossy forests and wetlands instead of a ‘mammoth steppe’. So unless we drastically cut our carbon emissions, reviving mammoths to ‘revive’ the tundra is no different from the technofixes that Bill Gates, Elon Musk and others have touted to mitigate the impact of climate change – but in a way that’s more pernicious than ambitious.

‘Help maintain permafrost’ also sounds like a lousy excuse to bring back a whole species, especially one so gregarious. Imagine how sad the mammoths might be living in a world that moved on from them millennia ago – or the ‘mammophants’ in a world that never had them. Even the tundra is smaller today. Instead, let’s focus on keeping what we already have, or at least what we had until a couple centuries ago with an attendant focus on species restoration. And let’s cut emissions.

Thanks to Jahnavi Sen.

The Wire Science@TheWireScience
4 Following 27.3K Followers
The verdict is a reminder – and vindication for those who have been demanding it in lower courts – that states aren… https://t.co/o5e2WPlDhg
7 hours ago
As entrepreneur Saul Griffith put it: “Imagining we can build machines that work 20-times better than all of biolog… https://t.co/ryvIykzlsr
7 hours ago
1
In a recent judgement, the Supreme Court directed states to set up eco-sensitive zones at least 1 km wide around al… https://t.co/VvKVEd4ExK
1 day ago
1 1
In many regions across the medieval Islamic world, male physicians decided what medicine (ṭibb) was and who practic… https://t.co/zaun0xG9lD
1 day ago
1
The World Meteorological Organisation believes there is a strong possibility that the ongoing La Niña event could e… https://t.co/vVbNdHBiDn
1 day ago
1 1
R. Madhavan's directorial debut, 'Rocketry', based on the life of ISRO scientist Nambi Narayanan, is an illustratio… https://t.co/Rv8bZ1847v
1 day ago
9 45
Maneka Gandhi recently encouraged religious leaders to protest the serving of eggs to school children with a bizarr… https://t.co/gTRViFyGyY
1 day ago
3 3
The expanding human presence at IIT Madras, which was carved out of the Guindy forest, has accompanied an increase… https://t.co/K7L5rCet4B
2 days ago
Laws in India regarding abortion are fairly liberal – but the challenges stand tallest in the face of ensuring wome… https://t.co/9Z21itTRpY
2 days ago
7 14
Dogs on the campus of IIT Madras, while not predators per se, are killers, with a population supported by anthropog… https://t.co/sicBj0IXlS
2 days ago
1
With India banning single-use plastics from July 1, 2022, @aathiperinchery speaks to legal policy expert Dharmesh S… https://t.co/sDAgZb5mQH
2 days ago
8 19
Working 36-hour shifts without sleep or food is considered a rite of passage for young doctors, who barely have any… https://t.co/pMAWtBLMJY
3 days ago
Medical students are not equipped to deal with the consequences of discrimination faced by women, tribal people and… https://t.co/BFCh54biiW
3 days ago
4 4
Educational research breaks the cycle of harmful learning practices and empirically unsupported opinions, and doesn… https://t.co/8bsiC0SteJ
3 days ago
The 'urbanisation' of IIT Madras has degraded the habitat of chitals, bonnet macaques, blackbucks and monitor lizar… https://t.co/itz29Vq2LR
3 days ago
1 2
Contact us