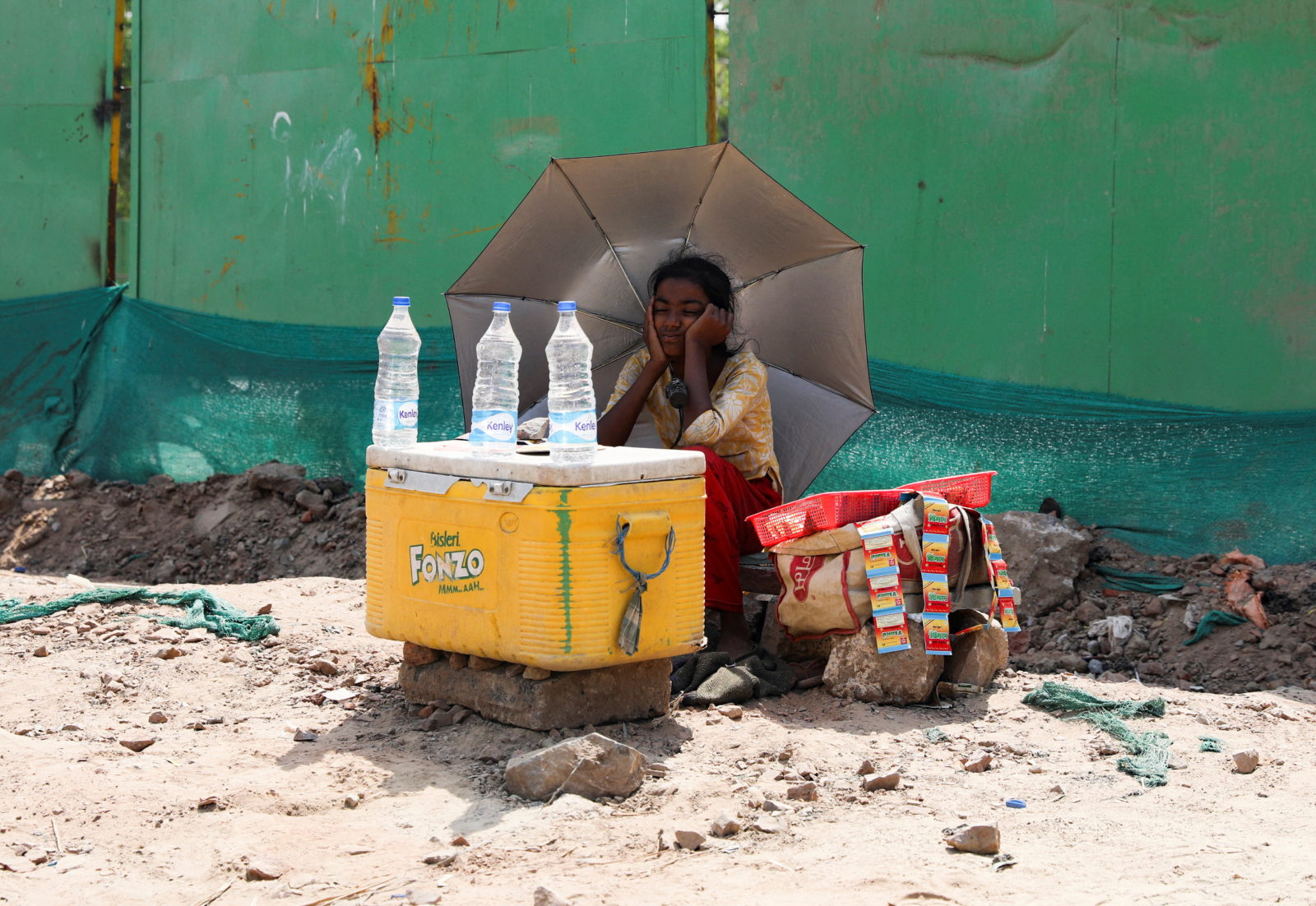 No Respite From Heatwaves for Northwest, Central India in May: IMD

A girl selling water uses an umbrella to protect herself from the heat as she waits for customers on a hot summer day, New Delhi, April 27, 2022. Photo: Reuters/Anushree Fadnavis

Extreme heat parched large swathes of South Asia this week after India’s hottest March on record, prompting Prime Minister Narendra Modi to warn of rising fire risks as the country heats up too much too soon.

In the capital New Delhi, temperatures have soared past 40º C for several days and are forecast to linger around 44º C until Sunday, with peak summer heat still to come before cooling monsoon rains arrive in June.

Maximum temperatures recorded in six districts in West Bengal were at least 5º C above normal, weather officials said, with the lack of rains in state capital Kolkata adding to its worries.

People in Odisha set up stalls at prominent public places to offer water to those passing by. Its neighbour West Bengal has announced summer school breaks from next week, days ahead of schedule.

Health officials in the western state of Gujarat made arrangements to tackle a potential spike in patients.

“We have issued an advisory to hospitals to set up special wards for heat stroke and other heat-related diseases due to the rise in temperatures,” Gujarat’s health secretary Manoj Aggarwal told Reuters.

In the northwest, Rajasthan has scheduled four hours of power cuts for factories, making it at least the third state to disrupt industrial activity to manage surging power demand.

“In view of the present power crisis, … it has been decided to impose scheduled cuts,” a state utility said.

Industrial disruption and widespread power cuts are bad news for corporate India, as economic activity has just started to pick up after months of stagnation amid government-imposed lockdowns.

Power cuts are expected to worsen in the coming days as the heatwaves and a pickup in economic activity are seen increasing electricity demand at the fastest pace in nearly four decades.

The unprecedented heat puts millions of blue-collar workers, including construction and farm labourers and those working on factory shop floors, at great risk. Sunstrokes have claimed thousands of Indian lives over the years.

“Most of India’s population is rural, without access to air conditioning and cooling stations,” said Arpita Mondal, hydroclimatologist at the Indian Institute of Technology, Mumbai.

Daily wage earners and those in urban slums are among the most vulnerable to heat, according to the Intergovernmental Panel on Climate Change, since cities tend to be warmer than rural areas due to the heat trapping effect of buildings and other factors.

In addition to power cuts for factories, Rajasthan imposed four-hour power cuts for rural regions, exposing thousands of families in the desert state to extreme temperatures.

The leap in power demand has left India scrambling for coal, the dominant fuel used in electricity generation in the country. Coal inventories are at the lowest pre-summer levels in at least nine years.

Peak-power demand in India surged to a record high on Thursday, and is seen rising by as much as 8% next month, the power ministry said. India’s weather office has warned of hotter weather in the coming days.

A shortage of trains to transport coal is exacerbating a fuel supply crisis. India’s power secretary said this week that train availability was 6% lower than required.

Electricity supply fell short of demand by 1.88 billion units, or 1.6%, during the first 27 days of April, the worst monthly shortfall in over six years, according to a Reuters analysis of data from the federal grid regulator POSOCO.

Power cuts in five states, including Rajasthan and Haryana in the north and Andhra Pradesh in the south, were the worst in over six years, the data POSOCO showed.

With power cuts showing an increasing trend, April shortages could exceed the large cuts implemented in January 2016 during a previous shortfall in power supply.

India last faced a big power crisis in October but the situation this month is far more widespread, with more than half of the country facing more power cuts than in October.