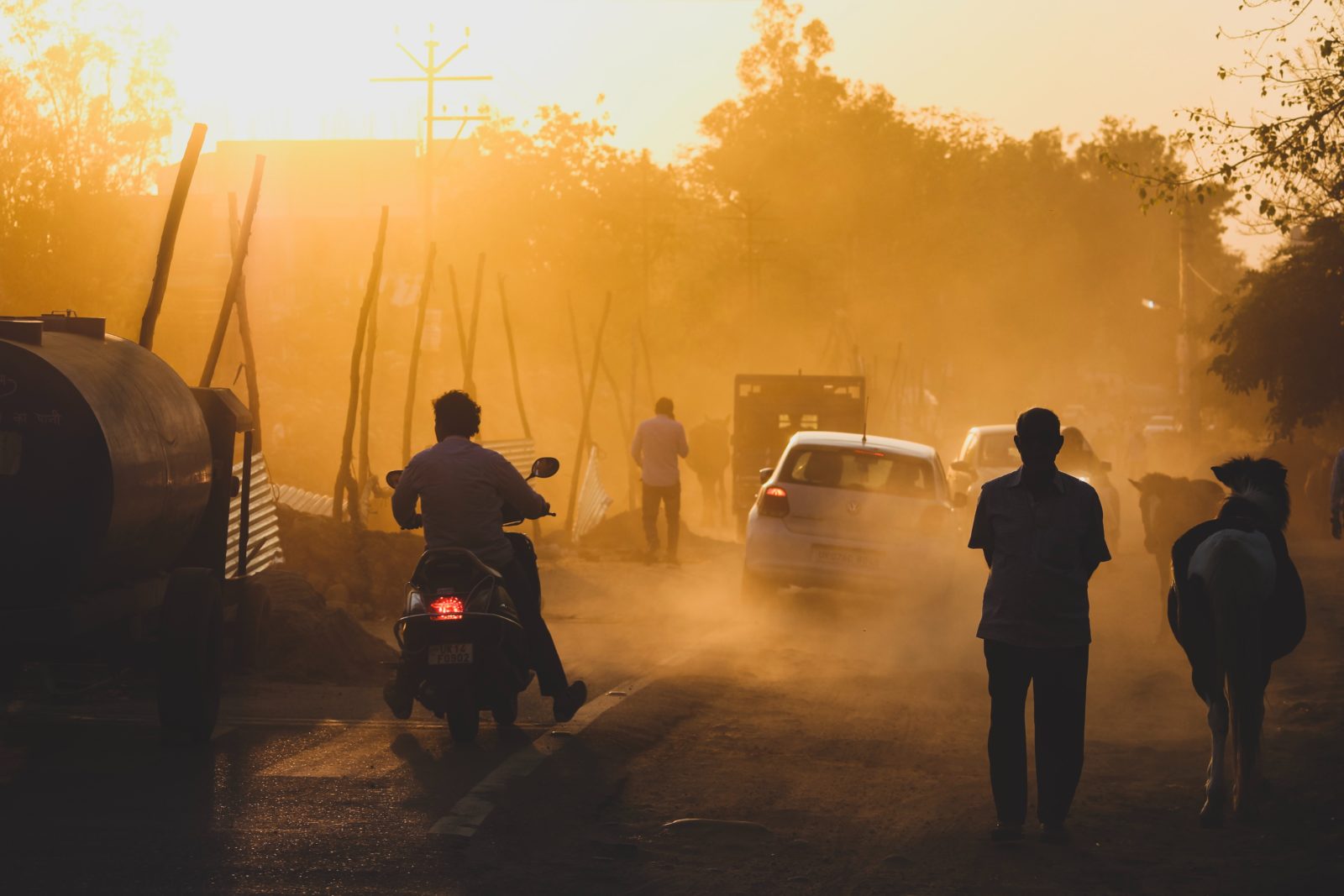 Dust kicked up by vehicular traffic and haze in the sky, Rishikesh, January 16, 2022. Photo: shobhit pant/Unsplash

New Delhi: As India aims to shift its energy production to renewable sources, new research by a team of IIT Delhi scientists says that India’s solar energy output is being hampered by air pollution.

The study has reported that India lost 29% of its utilisable global horizontal irradiance potential – which is shortwave radiation received from above by a surface horizontal to the ground, like a flat solar panel – due to air pollution from 2001 to 2018.

According to the team, successful implementation of the National Clean Air Programme, mitigation of household emissions and rural electrification will allow India to generate a surplus of 6-16 TWh in solar energy.

“Mitigating air pollution would therefore accelerate India’s progress to achieve its solar energy target at a lesser installation capacity, avoiding additional expenditure for the expansion of solar energy infrastructure,” a paper describing the study, written by Sagnik Dey, Dilip Ganguly, Somnath Baidya Roy and others from the Centre for Atmospheric Science in IIT Delhi, says.

According to Times of India, the IIT team considered two effects that could reduce solar energy production: soiling effect (presence of solid dust) and atmospheric attenuation (the scattering of light due to gaseous pollutants in the air).

The authors say that if the National Clean Air Programme is successfully implemented – i.e aerosol pollution is reduced by 20-30% by by 2024 compared to 2017 levels – and household emissions are mitigated through the supply of cleaner fuel, the additional solar energy generated by India would translate to an “economic benefit of $325-845 million annually”.

The study says the eastern and north-eastern power grids would be able to see more pronounced generation of surplus energy “because the population in those regions relied extensively on fossil fuel and biomass burning for day-to-day activities”.

A Physics World report said that the team found that the impact of attenuation and soiling was “greatest in the region of India’s eastern power grid, with 16% less sunlight reaching horizontal solar panels” in the 18-year period.

Meanwhile, the northern and western grids suffered 12% losses each on horizontal panels, while the southern and north-eastern grids faced losses of 10% and 11%.

The researchers also analysed the average loss in output incurred by different solar power systems. Surprisingly, simple systems such as horizontal and fixed-tilt systems faced lower losses – 12% and 26% respectively – on average. However, single-axis (ones that can rotate vertically or horizontally), and dual-axis trackers (which move with the sun) the average output lost on average was 33% and 41%.

The authors say that if India can completely avoid air pollution or strictly implement the PMUY and NCAP, then with a 76 GW installation, “it can achieve 95% and 98% of the equivalent generation from 100 GW of installed capacity respectively”.

“Our results suggest that cleaning air will not only accelerate India’s transition towards its renewable energy goals, but it would also save the additional revenues required for 24 GW of installation in the coming years due to the area involved balance-of infrastructural cost such as manpower, financial, and customer acquisition to meet its 100 GW target,” the paper says.

The paper suggests that since aerosol pollution is linked to increased cloud cover, the gains from clean air could be even bigger than their model predicts.