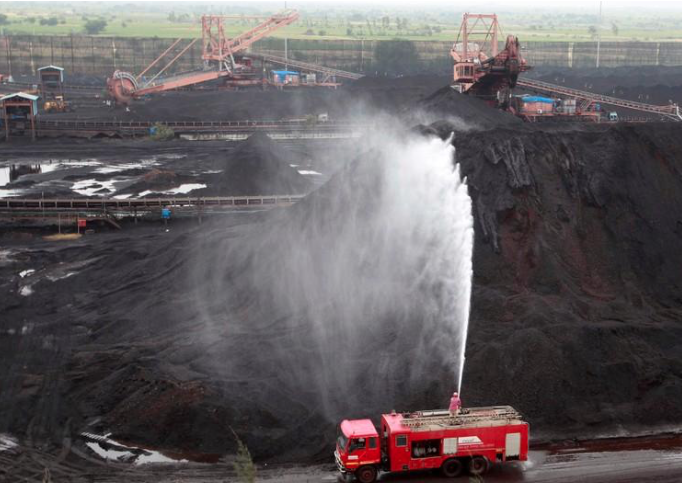 Water is sprayed over coal to be used to generate electricity at a coal-fired power plant of Essar power in Salaya village, Gujarat. Photo: Reuters/Amit Dave/File Photo

Chennai: India has pushed back deadlines for coal-fired power plants to adopt new emission norms by up to three years, and allowed utilities that miss the new target to continue operating after paying a penalty, according to a government notice.

India had initially set a 2017 deadline for thermal power plants to install flue gas desulphurisation units that cut emissions of sulphur dioxides. But that was postponed to varying deadlines for different regions, ending in 2022.

The new order dated April 1 from the environment ministry says plants near populous regions and the capital New Delhi will have to comply by 2022, while utilities in less polluting areas have up to 2025 to comply or retire units.

Operators of coal-fired utilities including state-run NTPC Ltd. and industry groups representing private companies such as Reliance Power and Adani Power have long been lobbying for dilution of the pollution standards, citing high compliance costs.

The latest notice follows suggestions from the power ministry that plants be given deadlines to adopt norms in line with the severity of pollution in the region where they are located.

A task force will be constituted by the Central Pollution Control Board to categorise plants in three categories “on the basis of their location to comply with the emission norms”, the environment ministry said in its order.

The power ministry said in January that a ‘graded action plan’ could help avoid immediate increase in power prices in various relatively clean areas of India and avoid unnecessary burden on power utilities and consumers.

Indian cities have some of the world’s most polluted air.

Thermal power companies, which produce three-fourths of the country’s electricity, account for some 80% of its industrial emissions of particulate matter, sulphur- and nitrous-oxides, which cause lung diseases, acid rain and smog.