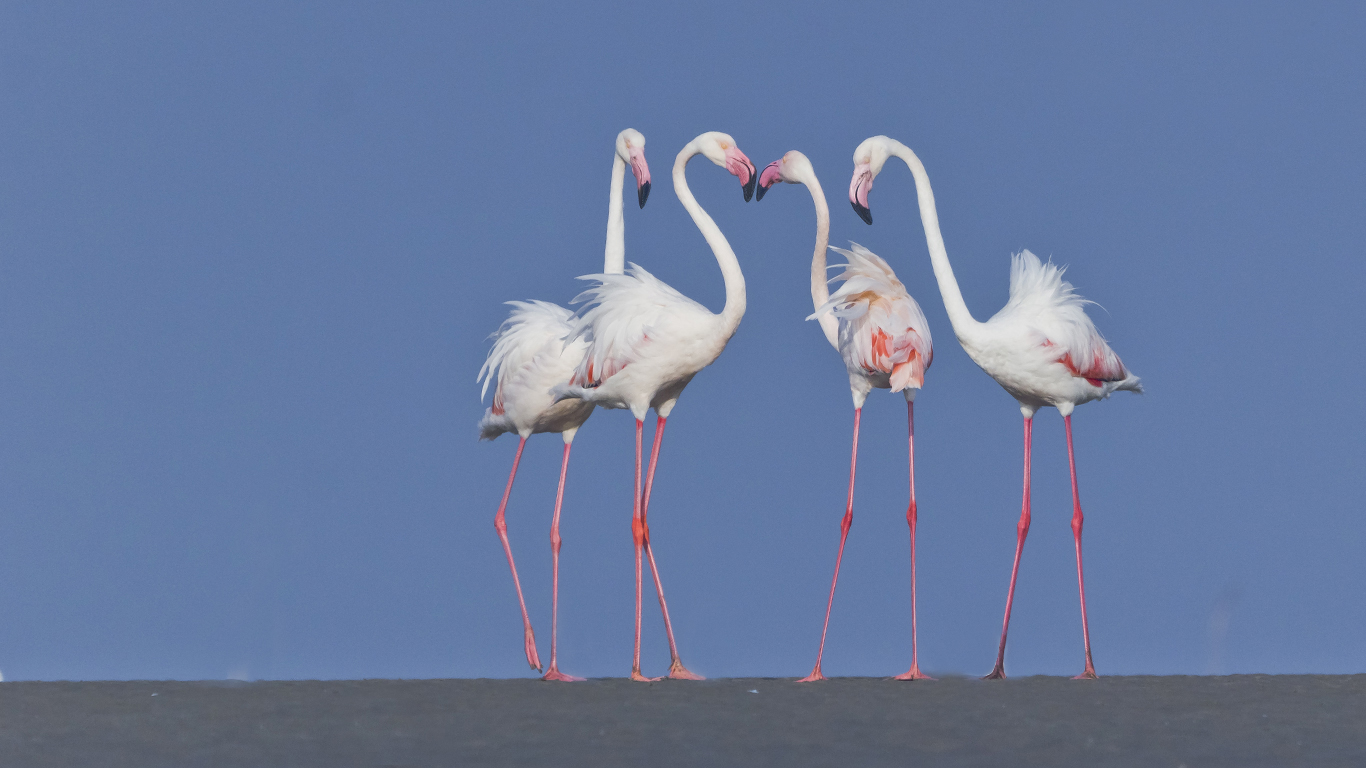 In October, once the rains have retreated from the Rann of Kutch, flamingos set off on their annual migration from their breeding grounds there to their feeding grounds, like the wetlands of Mumbai.

India has two flamingo species – the greater and the lesser flamingos – and tens of thousands of them congregate in clusters around the city. Here, they feed on benthic animals – those living on the bottom of oceans, lakes, rivers, etc. – like molluscs, crustaceans and blue-green algae. And then, sometime around June, save for a few that might ‘overwinter’ for a few more weeks, they fly back to Gujarat.

The birds are a beautiful sight – both when they are dancing around lakes and ponds, and when they are airborne, sailing as streaks of pink across the sky. And like many other birds and animals around the country, their habitats and the natural resources they need to live are threatened.

As it happens, their migration pattern renders efforts to estimate their numbers a necessarily dynamic affair.

Since 2018, the Bombay Natural History Society (BNHS) has been monitoring flamingo numbers around Mumbai’s wetlands. They reported a gradual increase in the number of lesser flamingos between May 2018 and May 2019 – but a slight drop in that of the great flamingos in the same period.

On the IUCN Red list, lesser flamingos are listed as ‘near threatened’ and greater flamingos, as being of ‘least concern’. But what BNHS found – more lesser flamingos and fewer greater flamingos – isn’t good news. This seems counterintuitive but there’s a simple reason: observational counts are different from population studies. And only continuously monitoring these birds’ numbers over many years can tell us anything meaningful about their long-term prospects.

“When the data accumulates, questions about populations will be answered,” said Mrugank Prabhu, a researcher with BNHS.

But more data, he added, will give rise to other questions – such as what could be driving these (potential) population trends.

The data for the migratory season between October 2019 and May 2020 is pending, thanks to the pandemic.

In 2017, the Mangrove Foundation, an autonomous body under the Maharashtra forest department’s Mangrove Cell, commissioned BNHS to conduct a decadal survey – to map and count Mumbai’s migratory birds.

As it happens, the city is something of an ideal place to determine how many flamingos there might be. “Mumbai has both kinds of habitat – creeks and inland wetlands connected to creek waters,” Harshal Karve, a marine biologist at the Mangrove Foundation, said.

BNHS has in turn focused on Thane creek, a 40-km-long stretch of intertidal mudflats and its adjoining areas. Flamingos use this creek during low tide. At high tide, the mudflats are underwater and the birds use the inland wetlands.

The organisation has developed a way to count flamingos in both creeks and inland wetlands, which means the final numbers could lend themselves to simple comparisons.

Broadly, seven or eight teams of researchers from BNHS simultaneously survey both banks of Thane creek at low tide. Each team manually counts the flamingos every day for three days, to eliminate biases. The figure that emerges at the end of the three days is recorded as the month’s count. The teams then return the next month to repeat the exercise. This whole thing happens from October to May.

This ‘standardised’ counting method, Karve said, “can be replicated in other parts of India to produce all-India data.”

According to both Karve and Rahul Khot, assistant director of the organisation’s natural history collections, there is a shortage of robust studies on flamingo populations in India.

The ‘State of India’s Birds’ report, published in February 2020, bears this out – calling the current and long-term population trends of the greater flamingo and the current trend of lesser flamingos “uncertain”. It also notes that there isn’t enough data to put together the lesser flamingo’s long-term trends.

In its authors’ words, this report was a “multi-institutional effort” to assess “the conservation status of Indian birds from the large volume of information available on the eBird platform”. The scale of its preparation provides a glimpse of the challenge lying before BNHS: the former went through over 10 million observations recorded by more than 15,500 citizen birdwatchers across India.

In addition to the simultaneous manual surveys, the BNHS teams also collect and analyse mud samples to determine which animals the birds might be feeding on. With this information, Khot said, “we can correlate flamingo distribution in the creek with the availability of food, and this will help us conserve the habitat and the species.”

Researchers also conduct “ringing and colour-flagging exercises,” in Khot’s words. These are the equivalent of telling tigers apart using their stripes. Flamingos don’t have such naturally unique markers. “So we catch the birds and put aluminium rings on their legs and plastic flags with numbers,” Khot explained.

These identifiers could also help others identify specific flamingos for studies of migration routes, stopover sites, feeding-site behaviour, etc. over their lifetimes. Thus far, the researchers have tagged 10,000 birds belonging to 35 species – including flamingos.

And they have already noticed one interesting feature: individual flamingos have been visiting the same sites since BNHS began monitoring the area in 2018, according to Khot.

Such site-fidelity indicates in turn that if these sites are lost – to real-estate development, say – the birds may not stop by or have to compete with other birds in other areas. And this in turn will only adversely affect their population as a whole.

“Flamingos, like many other birds, are habitat specialists,” Krishna M.B., an ornithologist in Bengaluru, said. This means their habitat is restricted to wetlands and shallow waters – “so habitat loss is crippling.”

In the course of their work, the BNHS researchers have also been evaluating the impact of developmental projects – both underway and planned – on migrating birds.

Shaunak Modi, the cofounder of Coastal Conservation Foundation, a citizens’ collective that, among other things, helps conserve “coastal biodiversity and habitats” in urban Mumbai, said a major threat to flamingo habitats in Mumbai is the Mumbai Trans-Harbour Link (MTHL), currently under construction in Sewri.

The Sewri creek is located about 25 km southwest of Thane creek and is an important foraging site for migratory birds, including flamingos.

“This area used to be a feeding ground but now fewer birds come here,” Modi said. “MTHL has altered their habitat, perhaps temporarily,” but this is why “fewer birds have been coming here in the last few years.”

According to Prabhu, the BNHS researcher, most migratory birds “need a place to roost at high tide because they can’t float on water, and have to take refuge in nearby wetlands.”

So water bodies adjacent to their feeding areas are just as important to the birds as the areas themselves. However, “coastal megacities like Mumbai put constant pressure on these habitats through developmental activities,” Prabhu said. By way of example, he pointed to the wetlands near T.S. Chanakya and the N.R.I. complexes near the southern edge of Navi Mumbai and the wetlands near Nhava Sheva, adjacent to the Jawaharlal Nehru Port Trust – all of which are being degraded in the name of development.

Another issue is pollution. “A lot of industrial discharge and sewage goes into Thane creek,” Karve said. Animals lower on the food chain – like those of the benthos – ingest many of these toxic substances, and the others that eat them, like the flamingos, end up with large amounts of the substances in their bodies. “This bioaccumulation of heavy metals can also be lethal – each organism has a certain threshold” it can survive, Khot said.

Since flamingos are faithful to their sites and are habitat specialists, Mumbai’s wetlands have high conservation value.

Beyond its rich feeding grounds, Thane creek retains a lot of value by virtue of its sheer size: it is 40 km long, and together with its adjoining areas can comfortably host many tens of thousands of flamingos and birds of other migratory species.

So when it comes to flamingo conservation, it’s important to identify and protect their sites – both breeding and feeding. And population estimates in turn are the first step on this journey.

Reporting for this story was supported by a grant from the Purpose Climate Lab. The Wire Science retained full editorial control.