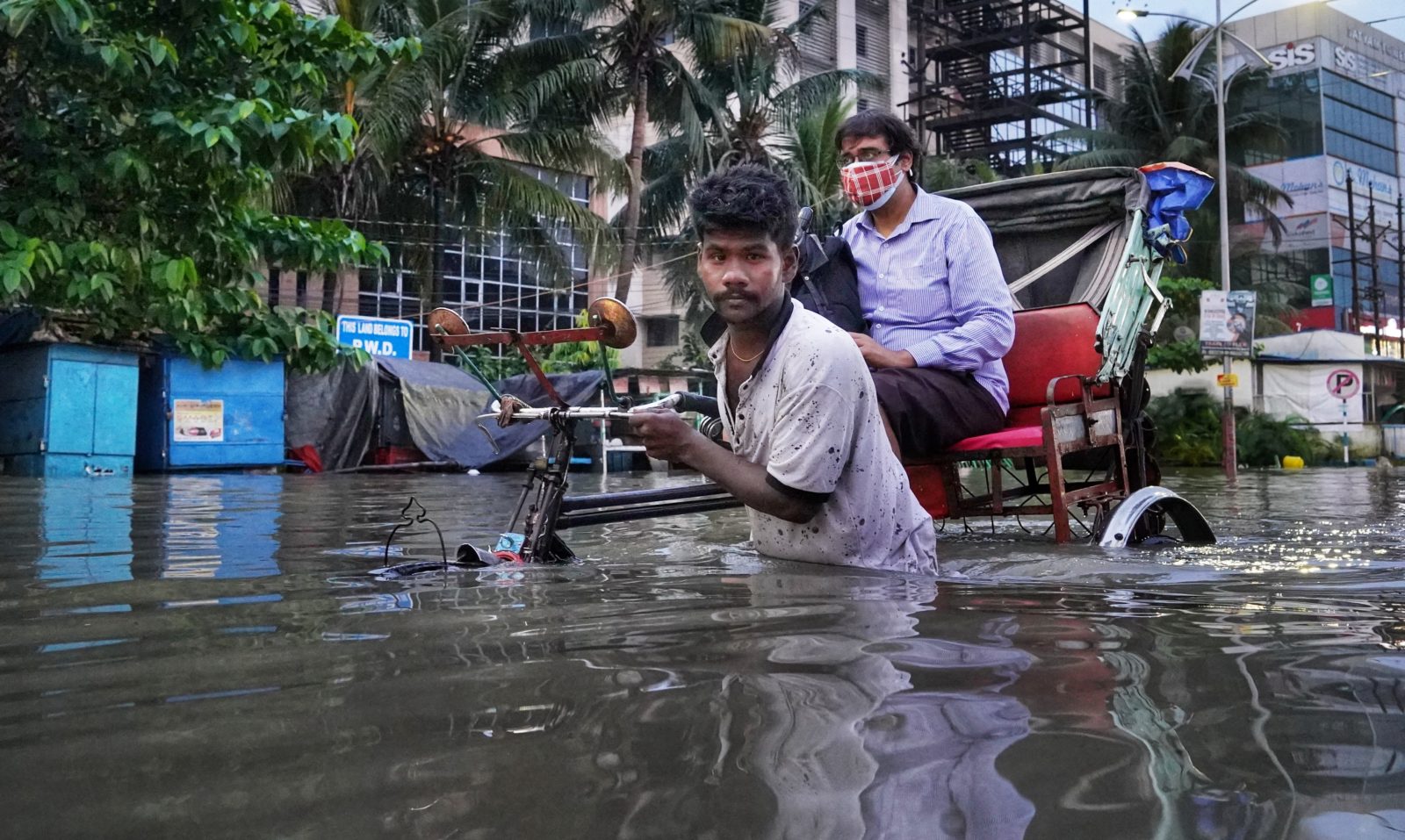 A man pulls his rickshaw and a passenger through the water on a road in Kolkata, October 27, 2021. Photo: Dibakar Roy/Unsplash

But climate change is now altering the dynamics of the Indian Ocean, show two recent studies. Heatwaves in the Indian Ocean are reducing monsoonal rains over central India, while the rapid warming of the ocean’s northern portions is intensifying cyclones.

Some regions and communities will be more vulnerable to these impacts, as will some sectors such as fisheries and agriculture. Developing relevant adaptation and mitigation strategies could be important in such scenarios, say climate scientists. We will also need to adopt more sophisticated climate models to predict these vagaries better.

Climate change is affecting numerous natural systems – from snow-clad mountains to tropical oceans. Some of these waters are warming up. In particularly warm weather caused by climate change, such as in El Niño years, sea surface temperatures increase. When the water’s temperature exceeds a seasonal threshold 1 for at least five consecutive days, it means a marine heatwave is occurring.

These heat waves affect life in the oceans drastically, many studies have shown. It bleaches coral reefs. This affects people: often, indigenous coastal communities that depend on coral reef fisheries bear the brunt. Coral reefs in the Indian Ocean, like those in the Gulf of Mannar, have faced such bleaching events.

Marine heatwaves can affect weather patterns as well, because sea surface temperatures are linked to atmospheric pressure and wind patterns. However, such impacts caused by marine heatwaves in the Indian Ocean are not too well-known.

To find out, scientists at the Indian Institute of Tropical Meteorology (IITM), Pune, analysed sea surface temperature in the Indian Ocean between 1982 and 2018 and daily rainfall over India, along with solar radiation, water salinity and other factors.

They found that 66 marine heatwave events had occurred in the western Indian Ocean in these years, and 94 in the northern Bay of Bengal. Once rare, these heatwaves are now yearly affairs.

Over the decades, instances of these events have increased: by 4x in the western Indian Ocean and by up to 3x in the northern Bay of Bengal. The rapid warming of the sea as well as strong El Niños are among the factors that caused these increases, the scientists found.

The team also reported that these heatwaves affect monsoon winds over India, thus influencing the Indian monsoon. As it happens, the heatwaves have different impacts on the monsoon in different regions. Strong monsoon winds weaken when they interact with marine heatwaves in both the western Indian Ocean and northern Bay of Bengal, resulting in dry spells over central India. The heatwaves over the Bay of Bengal cause excess rainfall in southern India.

Marine heatwave research is relatively new and few have made connections between them and terrestrial rainfall, Ming Feng, a physical oceanographer at Australia’s Commonwealth Scientific and Industrial Research Organisation who studies ocean circulation and climate variability, told The Wire Science.

The study advances the understanding of marine heatwave dynamics in the two key regions that are important to Indian monsoon variability, and could lead to better monsoon predictions, he added.

“This is the first study in the northern Indian Ocean [the Bay of Bengal and Arabian Sea] to show a close link between marine heatwaves and atmospheric circulation and rainfall,” Feng, who was not involved in the study, wrote.

Meanwhile, the northern Indian Ocean is also experiencing more intense cyclones due to climate change, another study by Roxy Mathew Koll – a climate scientist at IITM who led both studies – found.

Apart from analysing around 300 research papers for this study, Koll and a colleague also examined data of cyclones between 1982 and 2019, and studied ocean-cyclone interactions using sea surface temperature, salinity, etc.

Put together, the analyses show that the intensity of cyclones in the Arabian Sea has increased by 20% to 40% over these years. Sea surface temperatures that caused cyclones here are now 1.2-1.5º C higher than they were four decades ago.

This means the ocean is rapidly warming as we speak. This tends to enhance heat flux – the transfer of energy from the ocean to the atmosphere. Typically, heat and moisture released by warm waters in the ocean fuel tropical cyclones. So rapid warming favours the “rapid intensification of cyclones”, Koll & co. wrote in their paper.

Some studies have made this association before – but this statement from the current analysis is “stronger than that from other individual studies”. This is because the authors examined studies on sea surface temperature as well as global warming, and model projections to reach this conclusion, noted climate scientist Jayanarayanan Kuttippurath said.

Kuttippurath, who was not involved in the study, is an associate professor at the Centre for Oceans, Rivers, Atmosphere and Land Sciences at IIT Kharagpur.

The methods used are “sound and appropriate”, Kuttippurath added, though he wasn’t sure if the authors had considered the exchange of carbon dioxide between the ocean and atmosphere during the cyclone period as a factor as well. Nonetheless, the study is an “important review”, and such a “timely compilation” is needed for future research and policy analyses, he wrote in an email to The Wire Science.

Kuttippurath, Feng and Koll are all agreed that there are many fallouts of climate change-driven marine heatwaves and intense cyclones in the Indian Ocean.

We now know that marine heat waves impact the monsoon, especially over central India. But we need more research to understand its impact on agriculture, Koll said. “But it definitely has the potential to affect crops and farmers.”

According to India’s 2013 Economic Survey, the country’s agriculture still depends heavily on rain. Of this, the Indian monsoon comprises 75% of total annual rainfall, and thus substantially affects agricultural production and productivity. Many regions in central India – where agriculture is one of the main livelihoods – are already rain-deficit and dry spells caused by marine heatwaves could make the situation worse.

Climate change will further exacerbate marine heatwave risks in the region, according to Feng. This could suppress coastal upwelling – the process by which strong winds move surface water in the ocean, permitting water from below to surface – and reduce the amount of oxygen in the water. This in turn could have a “great impact” on fisheries.

A fast-warming western Indian Ocean could also induce more extreme marine heatwaves in the region. Similarly, the socio-economic impact of the warming Arabian Sea – while inducing more intense tropical cyclones in the region – could be great too, Feng added.

According to Koll, the lifespan of the extra-intense cyclones has also increased by about 80%. “As in the case of cyclone Tauktae, this means that more coastal states would face the brunt as the cyclone stays alive,” he explained. “Not only that, the fishing days are cut down for fishermen, since they cannot venture into the sea.”

Cyclone Tauktae originated in the Arabian Sea in May last year and wreaked havoc on the coastal districts of Tamil Nadu, Kerala, Karnataka, Goa, Maharashtra and Gujarat in three days.

Intensifying cyclones also impact inland communities, Koll added. “Recent cyclones and the weather disturbances that they have created have travelled inland into [the] Western Ghats and the Himalayas, causing heavy unseasonal rainfall in these regions.”

We need to map cyclone-prone regions and have to make a vulnerability index, Kuttippurath suggested. “Plans should be made in accordance with the index that [incorporate] the geography, people and socioeconomic condition of the region.”

Developing action plans to coordinate between different stakeholders, including service and administrative units and finding long-term solutions will be crucial too, he added.

One crucial factor in developing adaptation and mitigation plans is the ability to predict such extreme weather events better.

While India’s cyclone forecasting ability has improved over the years, ocean warming is posing new challenges, Koll said. We need better to monitor ocean subsurface heat, which can be used as inputs for cyclone forecasts. We also need at least three satellites to monitor winds over the Indian Ocean; we have only two right now, Koll added.

“That means only 60% of the Indian Ocean is monitored for winds. So even our best observed estimates of cyclone intensity are patchy! We need to scale up our investments so that we can at least implement these observing systems to monitor these extreme weather events.”

Future studies should also use “coupled” climate models – sophisticated models that include both atmospheric and oceanic factors – to test the relationship between the marine heatwaves and monsoon variability, Feng said.

Kuttippurath also made a similar observation for studying cyclones in the north Indian Ocean: that future studies could use coupled atmosphere-ocean models for climate projections.