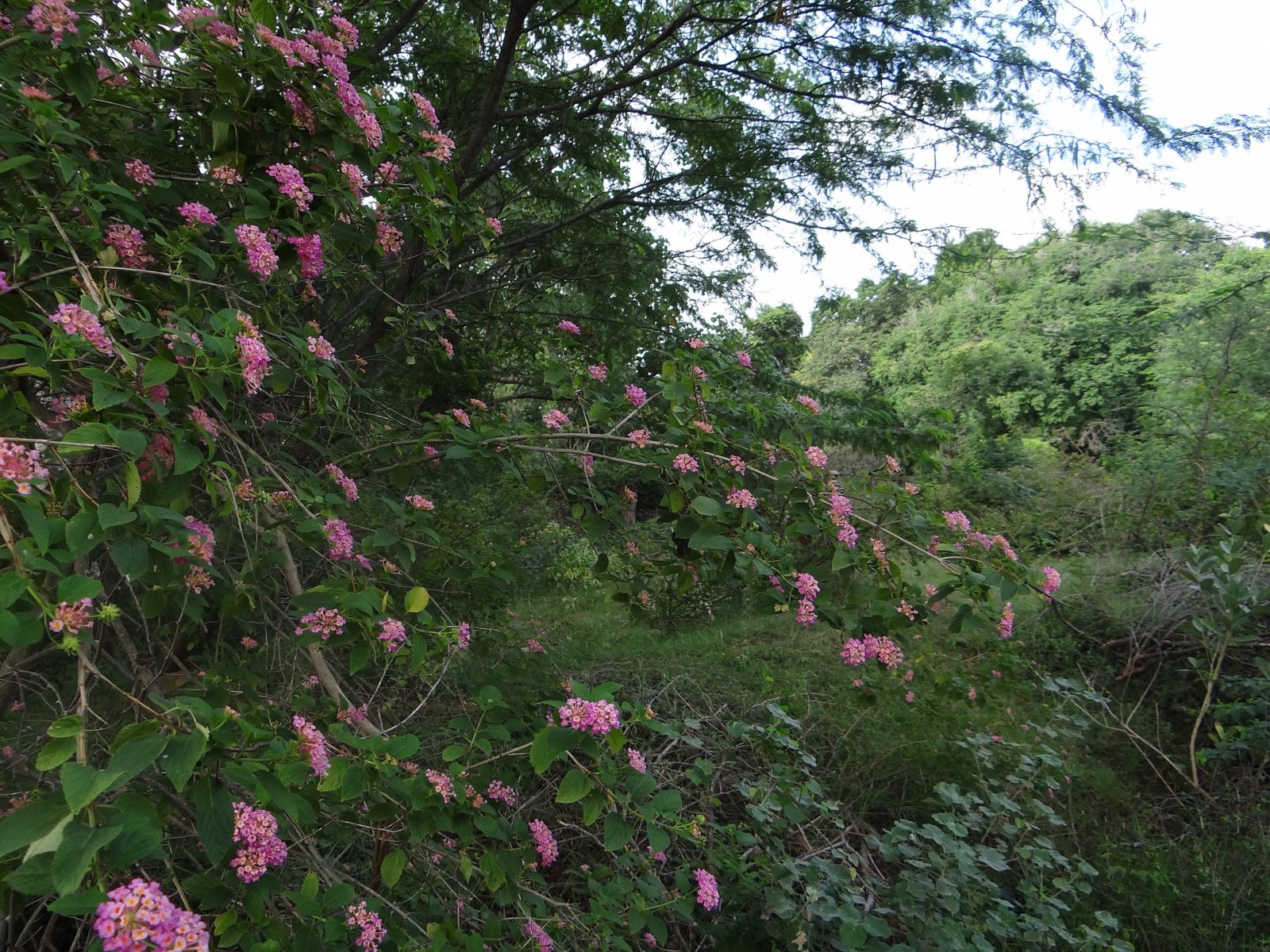 Climate change will worsen the spread of invasive species that tend to show a robust resilience to warming and spread across landscapes, scientists report.

A team from the Institute of Forest Productivity, Ranchi, analysed the dispersion dynamics of two invasive plant species, Chromolaena odorata and Lantana camara. The researchers used computer modelling to examine the present and future (2050) distribution of the two plants in central and eastern India. The study area included Jharkhand, Chhattisgarh and West Bengal. Their results, that the two plants showed robust resilience to climate change, provide valuable information on sensitive sites prone to future invasion. Such prior information helps develop prevention and control measures to contain the infestation.

Sharad Tiwari, a scientist at the Ranchi institute under the Indian Council of Forestry Research and Education (ICFRE) and one of the paper authors, told Mongabay-India that most of the studies presently focus on L. camara. But field surveys and interactions with local people indicate that “C. odorata is equally potent, and in the future, its prospective expansion may be more aggressive than L. camara,” he added.

Invasive species are emerging as a severe threat, especially to natural and agricultural landscapes, says Tiwari. Their presence promotes wildfires in natural landscapes, hinders the regeneration and expansion of native species and their natural habitats; and reduces natural resources for the tribal people living in forest fringe areas and depending on numerous non-timber forest produce.

“These robust plants can also adapt to and expand in diverse climatic and environmental scenarios,” says Tiwari whose team has previously modelled the potential risk zone of Lantana camara invasion and response to climate change in eastern India.

There are no precise estimates of the total area impacted, but “anywhere you go, you can witness their distribution,” he adds. “Areas having a combination of sunshine and moisture suit these invasives the most – hence their wide distribution in Goa, Jharkhand and southern India.”

Transportation, especially in tourist hotspots such as Goa, along with wind, birds and wildfires, drive the dispersal of invasive species that mostly spread along roadsides, agriculture fields and across natural landscapes.

Ram Ranjan, a resource economist at Shiv Nadar University, near Delhi, agrees that L. camara “is one of the topmost invasive plants on the planet”, affecting pasturelands, tea and coffee plantations, and maize and sugarcane crops amongst others. It has infested almost half of the tiger reserves in India and is found in central India, the Western Ghats, and the Shivaliks in the Himalayas.

According to Ranjan, climate change and forest fires further the spread of this plant. Previous research has shown that with warming temperatures, Lantana will spread even more in the Himalayas. It is also changing the fire patterns in Himalayan forests, which can result in the loss of oak forests, which are rich in biodiversity and provide livelihood support to the local communities. Invasive species add to the already existing concern of chir pines replacing oaks in the Himalayas.

“At the ecological level, invasive species are one of the top drivers of biodiversity extinction, degrading the structure, function and services provided by the ecosystems they invade,” explains Alok Bang, an ecologist and evolutionary biologist at Azim Premji University, Bengaluru. At the social level, they can result in huge health impacts. For example, the Aedes aegypti mosquito carries 54 viruses, including the dengue, chikungunya and Zika viruses. At the economic level, they have caused losses to the tune of $127 billion in India, from 1960 to 2020.

Also read: There Is Nary a Pest as Hated as Mesquite in the Desert Flatland of Kutch

Are green bonds a potential answer?

Ranjan has analysed whether green bonds offer a possible solution to the problem of invasive species in the Himalayas and a way to restore their degraded forests.

Green bonds are similar to conventional bonds, except they are used to protect and restore the environment. Any entity, like the World Bank, can float green bonds (after certification) which are bought by corporates and firms, explains Ranjan. Firms receive periodic interest on these bonds. The World Bank can then utilise the money for restoring the environment and the income generated by the environmental services can help pay back the bond money along with the interest.

The novelty of this research is that it examines the possibility of linking the green bonds to the species composition of forests, Ranjan says. When the cost of borrowing is linked to the composition of healthy trees and invasive plants in the forests, the borrowers of bond money have the incentive to promote trees that are beneficial to the environment and weed out invasive trees such as L. camara.

For Bang, what is novel is that the logic of green bonds, which was mostly used for carbon credits and financing, is now being extended to the problem of invasive species. Bang’s work on the economic impacts of invasive species in India shows that the country has been spending about $2 billion every year on managing invasive species, for the past 60 years.

However, Bang has some reservations in general about making recommendations based on modelling. “Models are a great starting point because they can forecast and point directions to undertake,” he says. “But what is missing here are the results coming from the broader and even narrower implementation of these models in the field.”

Usually, monetary incentives for conservation are seen as a practical approach wherein conservationists and businesses can come together, says Bang. Having cross-dialogues among multi-stakeholders certainly helps. “However, since carbon credits and finance activities have been implemented for quite some time now, a question needs to be asked about their efficacy. A broader question, regarding whether monetary incentivisation for conservation works or not, needs to be asked.”

“Even if the answer is resoundingly positive, in favour of incentivisation to conserve, it needs to be seen how it plays in the long-term, and what happens when the incentive is terminated” points out Bang. “Conservation, mitigation or any pro-environment activity that is based on monetary benefits may alter people’s attitude towards the environment, where the environment might be looked upon as property to benefit from, and that idea of ownership based solely on benefits could be problematic; problematic in theory, practice, and ethics and values about how we view nature.”

Scientists are exploring other options too. It is practically impossible to fully control or eradicate invasive species, said Tiwari. “We can, however, initiate area-wise interventions to restrict their dispersal in ecosensitive and other similar prioritised areas.” Control measures such as chemical, mechanical and natural are proposed usually, but Tiwari prefers and advocates the promotion of native species-based flora to address invasion. “My experience shows that virgin forests or forests having dense canopy does not allow the invasives to penetrate through their area,” he said.

“Burning is another option,” added Ranjan. “Lantana, in particular, is very costly to uproot, and uprooting results in more vigorous growth.”

For Bang, the best solution is to have tight biosecurity policies at the national and regional levels to prevent any alien or exotic species from gaining entry into the country. “India has a very weak biosecurity policy currently,” he said.

Bang also suggested timely assessments of potentially problematic species that are already reported in some parts of the country. “Management of an invasive species with a breakout in a small area is always easy and cost-effective in the short as well as long term,” he said. Additionally, a list of problematic species that could arrive in the country, either because they have already been reported in other parts of South Asia or from other regions with climates similar to India’s, or are growing unreported in the country, could be prepared.

This article was first published by Mongabay-India and was republished here under a CC BY-ND 4.0 license.