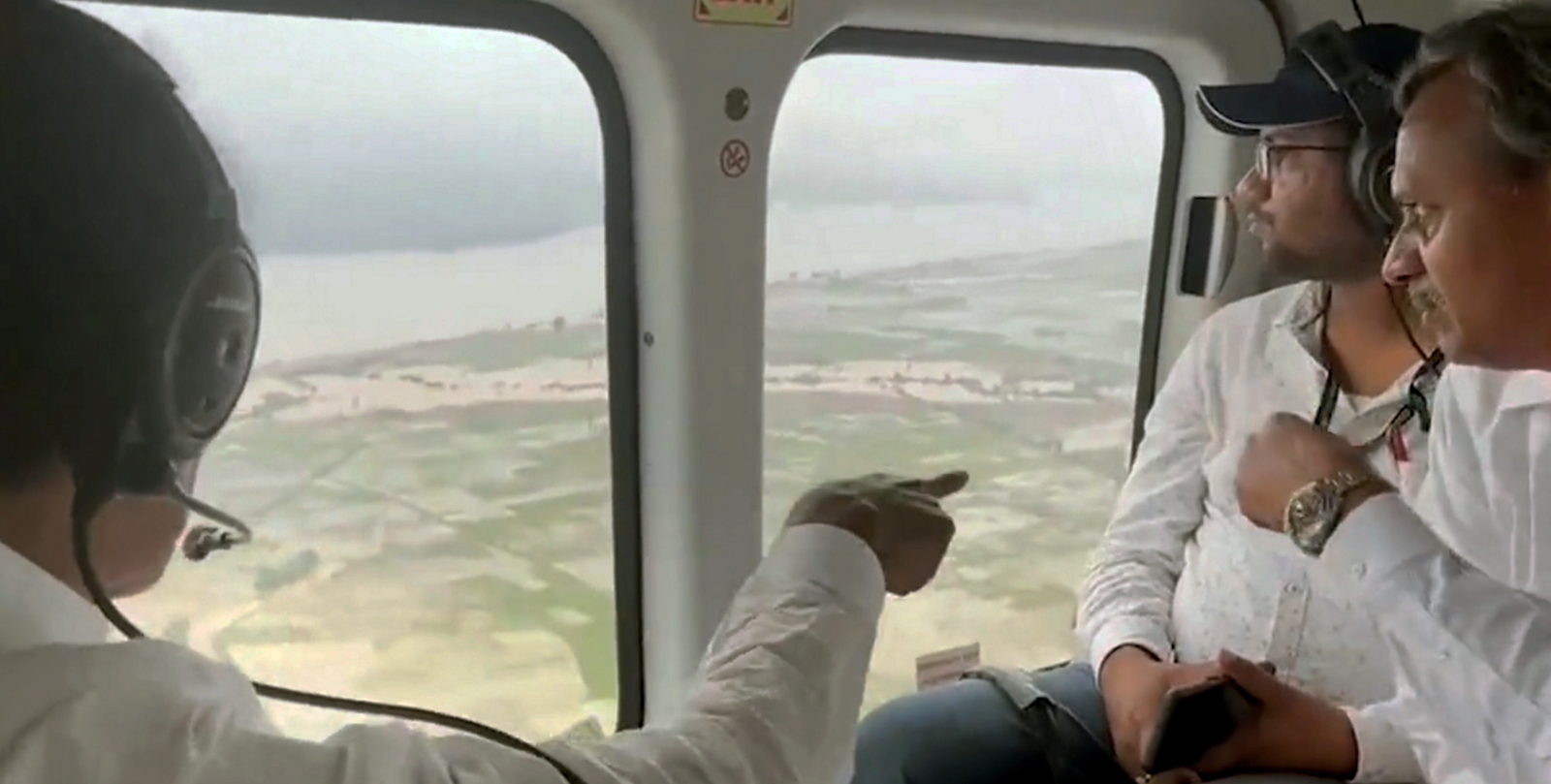 Diarrhoea and Under-5 Mortality

KCR during an aerial survey of areas affected by the Godavari flood, July 17, 2022. Photo: PTI

Bengaluru: On Sunday, Telangana chief minister K. Chandrashekar Rao had trouble zeroing in on the actual cause of a ‘cloudburst’ that was being blamed for the Godavari river overflowing.

In the 45 days since June 1, 2022, most of the state had received at least 60% more rain than its long-term average, with the bulk of these districts in Telangana’s northern and eastern regions. Over the weekend, Rao visited Bhadradri-Kothagudem district, which has received more than double the amount of rain expected in this period, with the Karakagudem mandal in particular receiving an excess of 251%.

While he was there, Rao performed a ‘Shanti Puja’, presumably to pacify the Godavari. Afterwords, he told the press that he suspected a foreign hand in triggering the cloudburst, that it was “God’s miracle” that the Kadem dam wasn’t washed down, and a vague allusion to “disturbances in climate and environment” that seemed to leave the door open to a climatic disturbance not caused by people.

Overall, they sounded like the words of a chief minister preparing the ground to absolve himself of an impending deluge, one that – if it happens – is bound to destroy thousands of acres of cropland, destroy farmers’ livelihoods and lay waste to a similar swathe of built environment.

According to Rao, he suspects a “foreign country” could have been responsible for the cloudburst because “in the past,” he alleged, “it has been done in Kashmir, Leh, Ladakh and even in Uttarakhand”. Rao is likely referring to cloud-seeding, a technique in which clouds are seeded with salts like silver iodide or potassium iodide, which encourage the moisture around them to condense on their surfaces. As a result, the cloud produces (more) rain.

It is a type of weather manipulation and more broadly a form of climate geoengineering. These are scientifically as well as politically controversial techniques with which some countries seek to modify the local climate and stave off bad effects of climate change. The techniques are controversial because both local and wider weather/climate modification is likely to have global effects.

For example, an excess amount of rainfall over the Arabian Peninsula in 2019 gave rise to a large locust swarm that destroyed crops in India in 2020 worth tens of crores of rupees.

But while Rao’s statement can seem amusing at first, it is very dangerous.

First, Rao has thus far offered no proof that a foreign country caused a cloudburst over the Godavari river. The sensationalism of the claim instead seems to be designed to divert attention from the Kaleshwaram lift-irrigation project. It is the world’s largest of its kind and was built at a cost of Rs 1.2 lakh crore. Today, however, its pumping stations are underwater. The cost of rescuing and restoring them back to normal function is expected to add to the already substantial debt burden the state assumed when Rao led the campaign to build it.

Second, causing a cloudburst requires a plane carrying the cloud-seeding salt to fly through the clouds that will cause the rain (at a point of time sufficiently before the advent of precipitation). Rao’s allegation thus amounts to claiming that foreign aircraft flew over Indian airspace – at least 1,000 km from the closest international border and just 500 km north of the Sriharikota spaceport – without drawing the attention of the Air Force or the Civil Aviation Authority.

Third, Rao appears to be blaming cloudbursts in “Kashmir, Leh, Ladakh and … Uttarakhand” on foreign countries (presumably Pakistan or China). These regions have all been experiencing more and more water-related disasters of late, and not just due to climate change. Jammu & Kashmir and Ladakh are under direct rule of the Bharatiya Janata Party-controlled Union government and Uttarakhand has the party in the state government; they have all been urbanising and industrialising; and they have all been ignoring the effects of such rapid ‘development’ on the states’ rivers, glaciers and catchment areas.

The Chamoli disaster in Uttarakhand in February 2021 was particularly emblematic: a rock and ice avalanche caused the Dhauliganga and Rishiganga rivers to overflow, washing away a small dam on the former whose debris mixed with the raging waters to damage other hydroelectric power infrastructure in the area, wash away entire villages and leave over 200 dead or missing.

Ask yourself – how much of this is climate change’s fault? To be clear, attributing individual phenomena to the climate crisis is a complicated task, but as time passes and the effects of climate change compound, the likelihood of association increases. But in the case of the Chamoli flood, all that climate change could be said to have done was to increase the amount of water in the river.

The resulting destruction was entirely our doing – specifically that of the state government. It allowed dams and hydroelectric power plants to be built on unstable mountain slopes, altered the flow of rivers, disregarded hydrogeology as these projects in turn dug tunnels, canals and pylons into the soil, and seemingly forgot the fact that the people living around these projects a) wouldn’t derive the benefits they’d produce and b) stood to lose everything if these projects failed catastrophically.

For Rao to blame artificial cloudbursts for these tragedies is thus disingenuous and, frankly, sinister. Members of the Bharatiya Janata Party already have already offered a bevy of nonsensical excuses for why floods happen; they don’t need more. The only permissible solution isn’t hard to articulate either: the party needs to call off its ‘development’ rampage and only institute those projects which have the consent of all stakeholders, starting from the persons living in the neighbourhood.

Ironically, however, the Telangana BJP president Bandi Sanjay Kumar called Rao’s comments about a foreign country the “joke of the century”. Either Kumar saw through Rao’s comment or realised he had to be quick to debunk the threat of a foreign aircraft flying well within Indian airspace to the Modi government’s favourite bogey, national security – or both.

Rao’s comments are entirely him following the Bharatiya Janata Party playbook, of normalising ‘development’ at a pace that is wholly antithetical to the threats posed by the climate crisis, while hiding his own failure to prepare for both near-future and long-term disaster behind the hand of an invisible enemy. Instead, he should take a step back and develop Telangana in a way that doesn’t require miracles to protect its people.