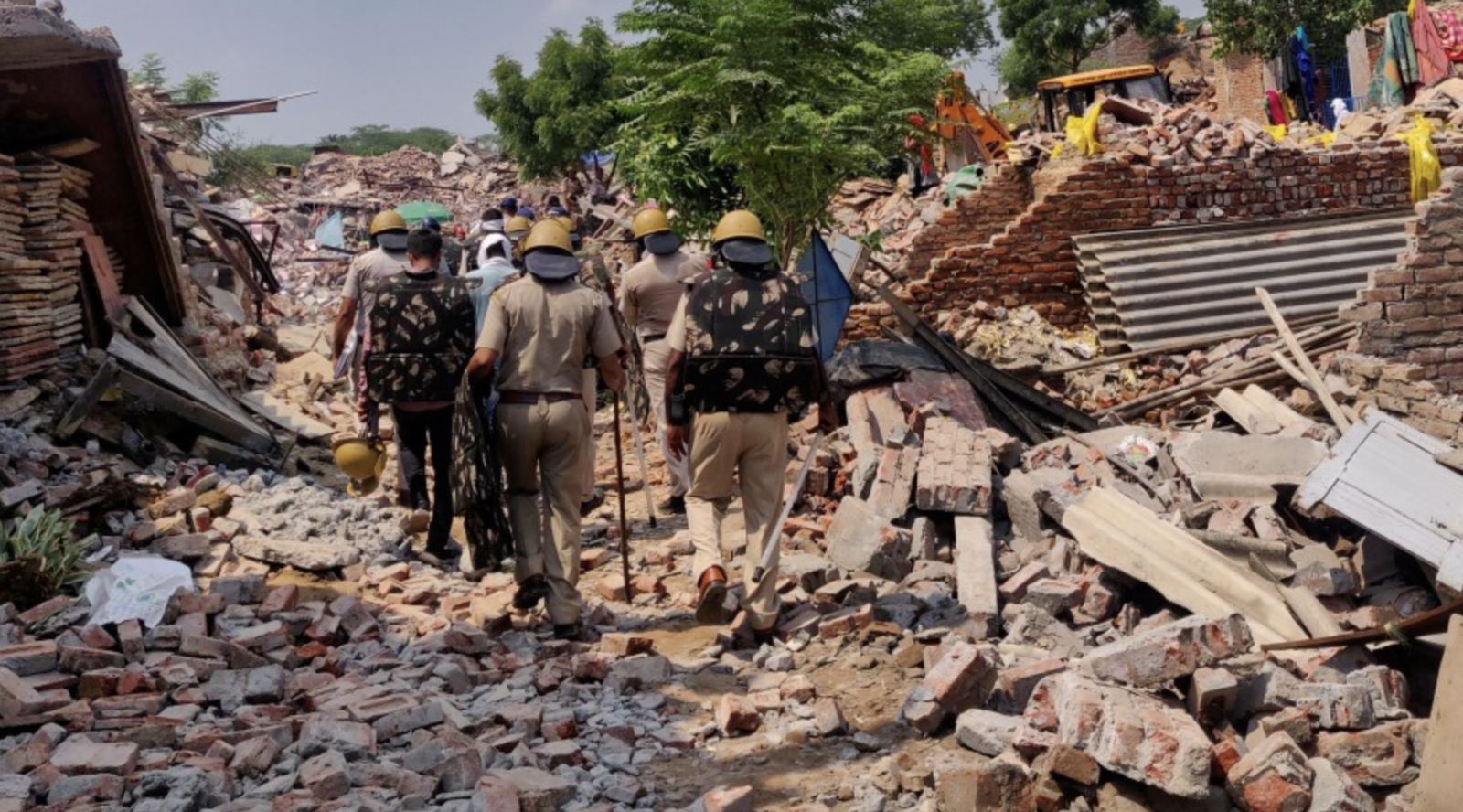 An aerial view of Khori Gaon in Faridabad, Haryana, will reveal that it is anything but a forest. Hundreds of small hutments dominate the area, so much so that it is difficult to find trees among the sea of homes, all of whose residents belong to the poorest section of society. So it was a surprise when the government started a process to evict hundreds of families from Khori Gaon on the grounds that they had encroached on forest land.

By the law, there is nothing legally wrong with what the state is doing. After all, the state has a Constitutional duty to protect and conserve forests. Courts have also upheld the legality of such evictions. Haryana has less than 4% of its total land under forests, so a ‘zero tolerance’ approach can seem like the only way to achieve the target of 33% forest cover, as under the National Forest Policy 1988.

Besides, one must not forget the law of the land – that it does not matter if an area has tree or forest cover; as long it is recorded as ‘forest’ in government records, it is a forest, and anyone who has encroached on it is liable to be evicted.

Only three years ago, the Supreme Court directed the removal of Kant Enclave, a forest area populated by the rich who had built homes on forest land. Environmentalists and others hailed the order for upholding both the rule of law and the need to protect the Aravalli hills. So what the Government of Haryana is doing may well be in accordance with the law.

But the fact of the matter is that issues like this can’t be seen only through the narrow confines of the law. Even if the government’s decision is within the law, we need to ask whether the law is being applied equally to everyone or selectively. That is, whether it conforms to the requirements of Article 14 of the Constitution.

Article 14 states that the “State shall not deny to any person equality before the law and equal protection of the laws in the territory of India”. Note that two expressions have been used in Article 14: ‘law’ and ‘laws’. Article 14 combines the English doctrine of the rule of law with the equal protection clause of the 14th Amendment of the US Constitution. Thus, the state has a constitutional obligation to ensure that people are not discriminated against – and that its citizens have the benefit of all the laws that protect them.

The Khori Gaon evictions do not pass the test of Article 14. Let’s see why.

The Khori Gaon area covers approximately 40 ha of land. According to the Forest (Conservation) Act 1980, “no forest land can be used for non-forest purpose without the prior approval of the Central Government”.

In Haryana, in 2020, 395.4 ha of forest land was diverted for non-forest purposes – which is nearly 10-times the land involved in Khori Gaon. This is very high for a forest-deficient state like Haryana, given that in the same period, larger states diverted relatively less forest land: Andhra Pradesh diverted 356 ha; Jharkhand, 332 ha; Odisha, 301 ha; Karnataka, 139 ha; and Maharashtra, 39 ha.

It’s also concerning that environment ministry officials have accepted reasons that are perverse and absurd on the face of it, reflecting a complete non-application of mind. For example, consider the approval the environment ministry’s Nagpur office granted in 2019 for around 40 ha of forest land to set up an Ayurvedic medicine and treatment centre. The project proponent’s justification – which the ministry accepted – is that the chanting of mantras is most effective when done on forest land. It observed:

In 2020, the ministry approved the diversion of 40 ha of the Bahu Conservation Reserve so the premises of the Jammu high court could expand to include the judges’ residences – despite the existence of alternative land.

Both the high court and the National Green Tribunal dismissed PILs against the decision. Just like chanting mantras in a forest, we don’t know if the ability to dispense justice and the quality of judicial decisions will improve if judges live on and work from forest land.

Now, what might the state’s approach have been if the encroachment of forest land had been done by state or corporate entities? One distinguishing feature of India’s environmental laws is that there is never a complete prohibition: they leave small windows open for violators to slip through. The only pre-condition is often that violators must not be petty and that their livelihoods must not depend on the violation – but a major violator whose profits are based on the violation. Once a violator is able to prove their profits depend on the violation, the law provides avenues to justify such illegality.

The courts also view the two parties differently. If the residents of Khori Gaon hadn’t been people on the margins of society, eking out a living and who had spent their lives’ savings building their tenements, the law is likely to have been applied differently.

On the other hand, if a mining company had encroached on this land, it is unlikely that any agency, including the courts, would have directed them to be removed. Large encroachers of forest land thus have a statutory ‘escape route’. And the law that facilitates this escape is the Compensatory Afforestation (CA) Act 2016, which provides for penal compensatory afforestation. The Act defines this in the following way (emphasis added):

So while the Forest Conservation Act 1980 states that no forest land can be used for non-forest purposes without the Centre’s prior approval, the CA Act allows violators to legalise their illegality by undertaking plantations and making payments.

Why is the benefit of penal compensatory afforestation not available to Khori Gaon’s residents? After all, they are at best guilty of using forest land for non-forest purposes. Right to equality under Article 14 requires that the state not treat the two categories of violators differently: the residents have an equal right to recourse through the CA Act.

And even when such a classification is to be made between different kinds of violators, it must be to the benefit of those who are disadvantaged. The second limb of Article 14 – “equal protection of laws” – is relevant. If they are denied this recourse, then the CA Act itself could violate the right to equality.

There needs to be an effective and implementable solution to the Khori Gaon issue. We can’t solve the problem through academic discussions or vitriol about how the forest department is a ‘colonial institution’ that is out to declare all areas as ‘forest’ with the aim of evicting people.

We must not forget that it was due to the efforts of some bold officers of Haryana’s forest department that both the high-end houses of Kant Enclave and real-estate projects were brought to book. In fact, most problematic constructions have been realised only after the state government overruled the objections of the department. In addition, senior IAS officers have abused field-level forest officers when the latter objected to handing forest land over to real-estate companies. We are unlikely to find a solution by vilifying entire communities – either the residents of Khori Gaon or forest officials.

Anyway, if the residents are offered the CA Act option, they will be required to pay a few lakh rupees per hectare, which could come to a few thousands of rupees per family. Bearing this in mind, the residents should petition the government – and if the government refuses this option, it will have to issue a public statement that it will not legalise any illegal, non-forest use of forest land across the country, irrespective of the violator’s identity.

That will be something to watch.