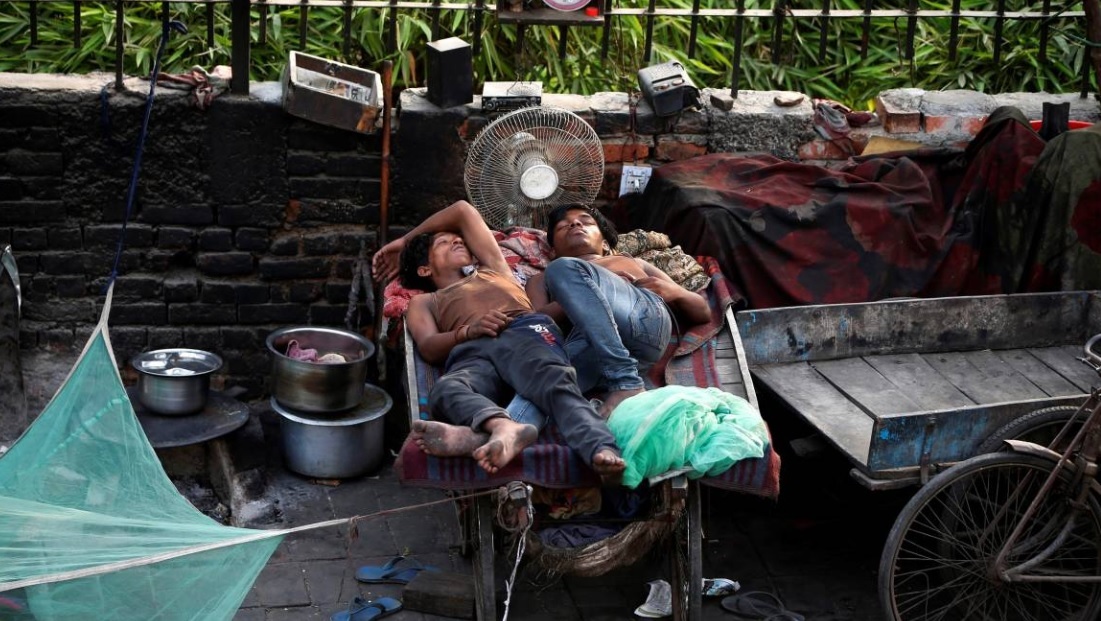 As unconfirmed reports of a novel coronavirus disease-associated nationwide lockdown swirled in India ahead of the official announcement on March 24, Savita, a domestic help in Mumbai, India’s commercial capital, requested the homeowners she serviced, to let her come despite the temporary but mandatory hiatus. Savita lives in a makeshift hut, in an informal settlement in north Mumbai, in Maharashtra with her husband, a daily wage earner and a child.

She prefers to be out on work from Monday to Saturday because her staying outdoors offers a brief respite from the electricity-starved environment at home, especially in summers. With the lockdown, she would be forced to endure rising temperatures without any cooling support.

India declared a 21-day national lockdown on March 24 to rein in further spread of the novel coronavirus disease (COVID-19).

Savita has no choice. She is now firmly entrenched in her hut in Mumbai even as the India Meteorological Department warned that the months of March, April and May are “likely to be warmer than normal” over northwest, west, central and parts of south India.

Maharashtra is the worst affected state with 1,135 confirmed COVID-19 cases as on April 9, 2020. Panic has set in compounded by the first recorded death and emergence of multiple cases in Mumbai’s Dharavi, one of Asia’s biggest slums, also the setting for several films including Slumdog Millionaire and Gully Boy. According to media reports, the patient lived in a building constructed under the Slum Rehabilitation Authority (SRA) scheme.

An Indian Council of Medical Research study has suggested that one COVID-19 patient can infect 406 people in 30 days if he/she doesn’t adhere to lockdown, according to a government official.

Environmental health researchers and sustainable building design experts have flagged concerns over executing social distancing in slums (where people live cheek by jowl) and in slum rehabilitation housing (SRH) through the scorching summers, adding that social-distance enabled housing designs will need to be considered for the sustainability of low-income neighbourhoods that would have benefits for health, energy, and economy.

“The virus is something not yet very tangible for many,” environmental health researcher Tanya Singh, of the University of New South Wales, Australia, told Mongabay-India.

“Especially if people are exposed for prolonged periods of time to heat they need to find some escape at least for a short while. Heat, but also feelings of boredom or feeling trapped and stressed are exposures people immediately feel,” she observed.

Singh co-authored a 2019 study centred on Delhi (India), Dhaka (Bangladesh) and Faisalabad (Pakistan) that said people in densely built, low-income neighbourhoods, with no open green spaces, remain unsheltered from heat even at night.

The study observed that poor urban neighbourhoods are more vulnerable to the extended effects of heat and while high and low-income neighbourhoods both have heat going up during the day, one’s ability to afford air conditioning (AC), avoid strenuous activities outdoors and presence of shade make a difference in coping with the heat exposure.

Also read: From Drought to Deadly Disease – No Respite for Migrant Tribal Farmers

“Normally, people might have gone out for a stroll in cooler outdoor temperatures or sat in front of their houses, but that’s not possible at the moment. With limited ventilation possibilities in low-socioeconomic houses staying indoors in such (high heat) conditions is not comfortable and even risky for a long period of time,” she added.

Short-term cooling options in informal settlements are limited, reminds Singh, adding that easy measures to cool households that are easy to implement (such as outdoor shading of walls and roofs) may not be enough during extreme heat events and residents may still feel the need to step out and cool off in the shade and with a breeze.

But this also raises questions whether a form of safe social distancing in outdoor space can be allowed under these conditions.

“This depends on how much space is available and how likely people will adhere to safe distance rules. Large parks surrounded by open space with lots of shade, opportunities for breezes and close to the water with options of keeping enough distance between people (1.5 to 2 metres is recommended mostly) could be one approach,” she said.

“But again for people who are not mobile, this will also not work. Temples, or air-conditioned offices, shops and malls (not for shopping purposes but for cooling purposes) could be opened to bring relief, but as the population in Indian cities living in poverty is huge it might not be possible to ensure a safe distance between people and it will be difficult to keep surfaces hygiene,” added Singh.

Ronita Bardhan, an architect and an expert in low-income housing in the Global South, especially in the slum rehabilitation housing of Mumbai, said going ahead building designs for low-income neighbourhoods will have to factor in social-distance enabled plans.

Because of the poor environmental quality, these compact high rises are often called ‘vertical slums’, often forcing the occupants to abandon these houses and either move back to the horizontal slums or create an informal settlement in some other parts of the city, in a rebound.

Bardhan and colleagues are now investigating the efficacy of social distancing in the SRH as compared to their slum counterparts.

“We intend to see if the new form of low-income housing that is built under the Indian government’s Housing for All by 2022 Mission or similar projects in other parts of the Global South, can provide the efficiency of better quality living than the slum counterpart,” added Bardhan.

Under the Pradhan Mantri Awas Yojana (Prime Minister Housing for All Mission, 2015), India aims to build 20 million housing units for the poor by 2022 and make Indian cities slum-free through slum rehabilitation projects.

Ultimately, the researchers intend to devise social distancing-enabled low-income housing design that not only allows for effectiveness in public health but also has knock-off effects on energy, economy, and well-being.

“Designing for social distancing will enable better environmental quality of the SRH units which in turn can curb the spread of diseases. For instance, in our research, we observed that there is one SRH design typology that reduces the incidences of tuberculosis, perhaps by restricting the spread while another design had a higher probability of disease incidences,” said Bardhan.

Also read: North America’s First Immigrants May Have Walked Along the Beach to Go South

In terms of indoor air pollution, slums are performing better than SRH in several cases, according to our study, noted Bardhan, adding that the indoor air pollution in Slum Rehabilitation Authority (SRA) homes in Mumbai is five times higher than the national limit.

The slums offer informal outdoor spaces that can provide refuge from indoor pollution often generated through cooking and other lifestyle practices, which is heavily impaired in the design offered by the SRH.

Ramit Debnath, who works on energy justice and energy policy, points out that the emphasis on ventilation and fresh airflow by experts to tackle COVID-19 connects back to the idea of planning and designing low-income settlements.

“Building designs for low-income neighbourhoods do not comply with the architectural recommendations of distance. Extreme heat is going to make low-income neighbourhoods worse in terms of environmental quality, particularly SRH in Mumbai because there are no airflow pathways and no exchange of fresh air in rooms. And with reference to the novel coronavirus disease, experts are emphasising the importance of fresh air,” added Debnath, department of architecture at the University of Cambridge, the UK.

“We have to keep two things in mind – how do we provision energy (how do we cool these buildings in innovative ways so as to minimise dramatic increases in energy consumption) and how do we ensure fresh air exchange,” said Debnath.

Shiraz Hirani of Mahila Housing Trust (MHT) said in less congested low-income neighbourhoods such as in Ranchi, green-roof options have been explored.

MHT is an Ahmedabad-based NGO is helping urban slums to adapt to pressing climate change issues such as heat stress and flooding. The non-profit has helped houses to bring down their indoor temperatures by switching to cooling roofs and reduce energy bills by installing energy-efficient devices.

“In slums that have open spaces and are not as congested as slums in Mumbai, we have helped set up green roofs that have terrace gardens with vegetables growing. So the temperature is reduced by four to five degrees Celsius and the residents also get vegetables for their own consumption,” Hirani said.

Another solution is to have layered city maps of vulnerable hotspots.

“We need to have hotspot maps of cities that can specifically indicate the zones that are more vulnerable to heatwaves. Within the hotspots, we have to find out potential quarantine zones that have a relatively lower urban density or effective environmental parameters like temperature and air velocity, which can prevent the spread of infections. Prior identification of city’s risk hotspots can enable effective reallocation of resources and also allows flexibility in urban planning. In an emergency situation this flexible city planning permits for rearrange/shift of the population in accordance with the contextual demands,” added Bardhan.

The article was originally published on Mongabay India. You can read it here.