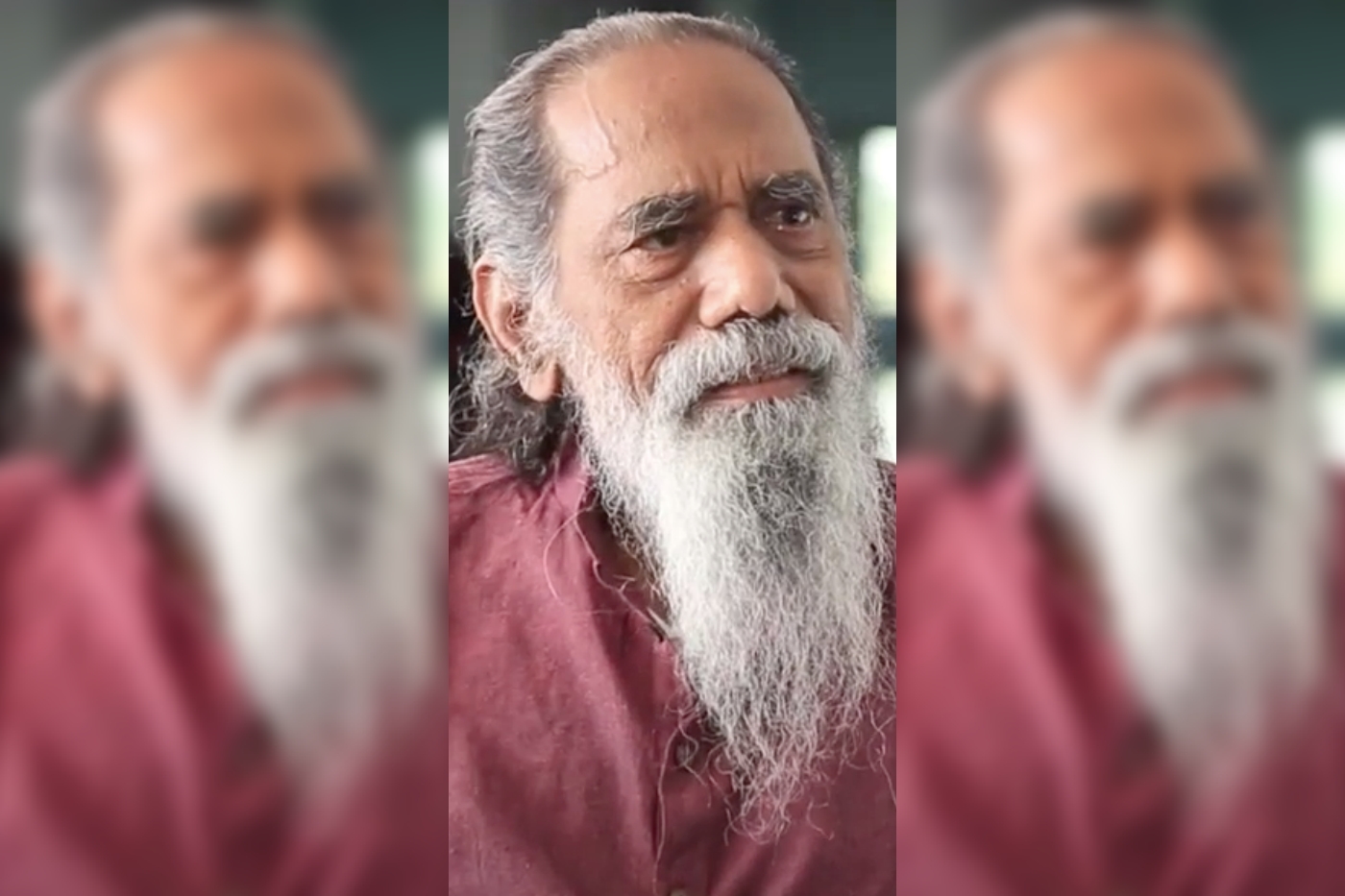 Nagpur: Many people understand ‘neer ksheer vivek‘ as a swan’s supposed ability to separate water from milk. The former forester Maruti Chitampalli busted this myth for Marathi readers. He said that the lotus stems are deep inside the water, and the swan dips its neck, tears that stem with its beak and sucks only the white substance.

Another story that Chitampalli is popularly associated with is the chukar partridge (Alectoris chukar) and its ‘love’ for the Moon. Chitampalli wrote that the chukar lays its eggs on the ground and, knowing the risk, is keen on raising its offspring faster. So the bird teaches its young ones to eat termites that crawl out of the soil only at night. These termites’ bodies shine in the moonlight, which is why the chukar likes the time of moon-rise.

Chitampalli has studied and recorded many such observations in his writings. He has spent over four decades in Maharashtra’s forest-rich Vidarbha region, before he returned to his native Solapur only a month ago.

In his honour as well as of the much better known Salim Ali, Maharashtra declared the week of November 5-12 to be its first ‘Bird Week’. November 5 is Chitampalli’s birthday and November 12 is Ali’s birth anniversary.

On November 5 “we inaugurated a Maruti Chitampalli Reading Room at Solapur with his books as he entered his 90th year, to honour the retired forester, literary person and an ornithologist,” M.K. Rao, the principal chief conservator of forests, Nagpur, told The Wire Science.

A lifetime with forests

Born Maruti Bhujangrao Chitampalli in 1932 near Solapur, his mother first taught him to love the forest. His family was large and poor, so after he completed school, he decided to study at the Coimbatore Forest College in 1958. The course was only two years long, and offered a stipend and guaranteed a job in the forest department. After he completed his training in 1960, he was posted in Maharashtra.

Chitampalli spent his first decade as forest officer in the Konkan region, which had no national parks or wildlife sanctuaries at the time. He was then posted at the Navegaon National Park in Bhandara district, kicking off a period of great fascination with the forests of Vidarbha.

There are 16 types of forests in India – but “during my two-year training at the Coimbatore Forest College, the theory classes were all focused on wood types, length, breadth, etc.,” Chitampalli told me over the phone. “It was [Marathi author] G.N. Dandekar who introduced me to the beauty of the forests.”

At the Navegaon bandh – a small dam at Navegaon village – he met Madhavrao Patil Dongarwar, a local conservationist who used to be a hunter, who taught him “how to read the forest and how to experience the forest”. Chitampalli also began to move among the members of the local tribes, stayed overnight at campfires, sat in hideouts for hours together, and began absorbing the jungle through their eyes.

“I collected folk tales and fables from Adivasis about birds and trees, their songs… They have such a rich language,” he said. “Their language has words for each and every element of the forest, even for different smells.” He would spend many days in the jungle, along with his supportive wife and daughter.

Whatever he learnt on the ground, Chitampalli would follow-up in books and essays, and whatever he read, he would want to try out in the forest. His native tongue is Telugu, but having grown up in Maharashtra, he could speak Marathi. However, writing in Marathi, or reading Sanskrit – he discovered hundreds of stories written in this language featuring many birds and animals – was out of the question.

So when he was posted at Nanded, aged 40 years, he enrolled with a local Sanskrit school. “Early morning, until about 10:30-11 am, I would attend school and then go to the office. One of my Sanskrit teachers was kind enough to teach me late in the evening, too,” he recalled.

And five years of studying Sanskrit eased the way for learning Marathi as well. But he didn’t stop here: when he discovered a glut of papers in German and Russian research journals about forests, birds and animals he wanted to know about, he learnt those two languages as well, in Pune. The noted Marathi scholar Narhar Ambadas Kurundkar, whom Chitampalli met regularly, guided him on writing popular articles based on the contents of scientific papers.

This is how Chitampalli came to be credited for popularising forests, especially among the residents of Maharashtra. He is also well-regarded for introducing new words to the Marathi language – many borrowed from Adivasi languages and some of his own coinage, such as kaak gaar for rookery (a colony of crows) and dev vriksha for personifications of giant trees, instead of rakshasa.

His first book, Pakshi Jaay Digantara, was published in 1981 and was a bestseller – as was the title that followed, Janglach Den. Then came Ranwata, whose first edition sold all its first-run copies in four months and is currently in print in its 10th edition.

Shreesh Kshirsagar, a senior birder and a regular trekker in Nashik, likes two of Chitampalli’s books more than the others: Mrug Pakshi Shastra (1993), which recalls stories of sages and their hand in preserving natural systems like forests, as described in older literary works; and Shabdanche Dhan, a collection of profiles of various conservationists he published between 1977 and 1990.

What Kshirsagar likes most about Chitampalli is his eye for “minute” details “presented in fluent, binding language”. Kshirsagar added that Chitampalli’s “stay in the forest … enriched his perimeter of experiences.”

Kulkarni also said “Chitampalli’s writings showed what a forest officer can do beyond his regular duties.” Indeed, as part of his regular duties, Chitampalli helped develop the Karnala Bird Sanctuary near Navi Mumbai, and with the Melghat Tiger Project. He also worked hard to improve Navegaon National Park and Nagzira Sanctuary, both in (formerly undivided) Bhandara district. His literary accomplishments and his environmental communication work were all beyond these duties.

After he retired as the deputy chief conservator of forests in 1990, Chitampalli stayed in Nagpur for a time, in a modest apartment. The almirahs in his living room were full of books, in English, Sanskrit, Hindi, Marathi and German. He has said it was his opportunity to catch up on all that he wanted to read, learn and write. He would take notes as he read, as he had done for many years, which then fuelled his longer articles, essays and books.

Sneha Damle, an educationist, was friends with Chitampalli’s daughter Chhaya; Damle often visited their home in the 1990s and accompanied the duo on their visits to Navegaon bandh. “I always saw him busy surrounded by heaps of books, many of them open for reference on his table,” she told The Wire Science. “I would inevitably see him either writing or reading. I am still enamoured by his vratastha vrutti (dedication for the cause).”

She recalled Chhaya’s description of her father’s routine. Irrespective of the weather, he would wake up at 3 or 4 in the morning and write until the clock struck 8. “I never saw him talk much at home, but he was an altogether different person in the field. I learnt a lot about jungles from him there,” Damle said.

One of his more important creations is Pakshi Kosh, an encyclopaedia of more than 400 birds, their habitats, migration patterns, breeding habits, etc. written in Marathi. He had collected these details from the members of the Korku tribe in Melghat, the Gond in Gadchiroli, the Thaakar in the Western Ghats and from the Jhadipatti Boli dialect of Chandrapur and Bhandara districts. He repeated the feat with Prani Kosh, an encyclopaedia of 500+ animals also written in Marathi.

Soon after, he spent 10 years in the Konkan region to collect material for Matsya Kosh, a compendium of the fishes around Maharashtra and off its coast. This book is currently in the works, as is Vruksha Kosh, which concerns trees.

Two of his books are required reading for BA and MA students at Nagpur University and Amravati University, while one of his write-ups also features as a chapter in the class VII Marathi textbook in state board schools.

Shivaji Tambe, the chairman of the Marathi Language Committee of Balbharati, which produces the textbooks for schools under the Maharashtra state education board, said Chitampalli’s writing has two important messages for children: “They need to realise that insects, animals, birds, trees everything co-exist with humans. Second, [they need to note] the power of observation, which is amply reflected in Chitampalli’s eloquent writing.”

Chitampalli is now back home in Solapur, and has been relishing the renewed interest in his work. However, he is also disappointed that his writings haven’t been translated to English. When I spoke to him, he also complained that today’s foresters – forget common people – don’t observe enough and take notes. “Diary-writing is a must when out in a jungle. No one does it now.”

Nivedita Khandekar is an independent journalist based in Delhi. She writes on environmental and developmental issues. She is on twitter at @nivedita_him.