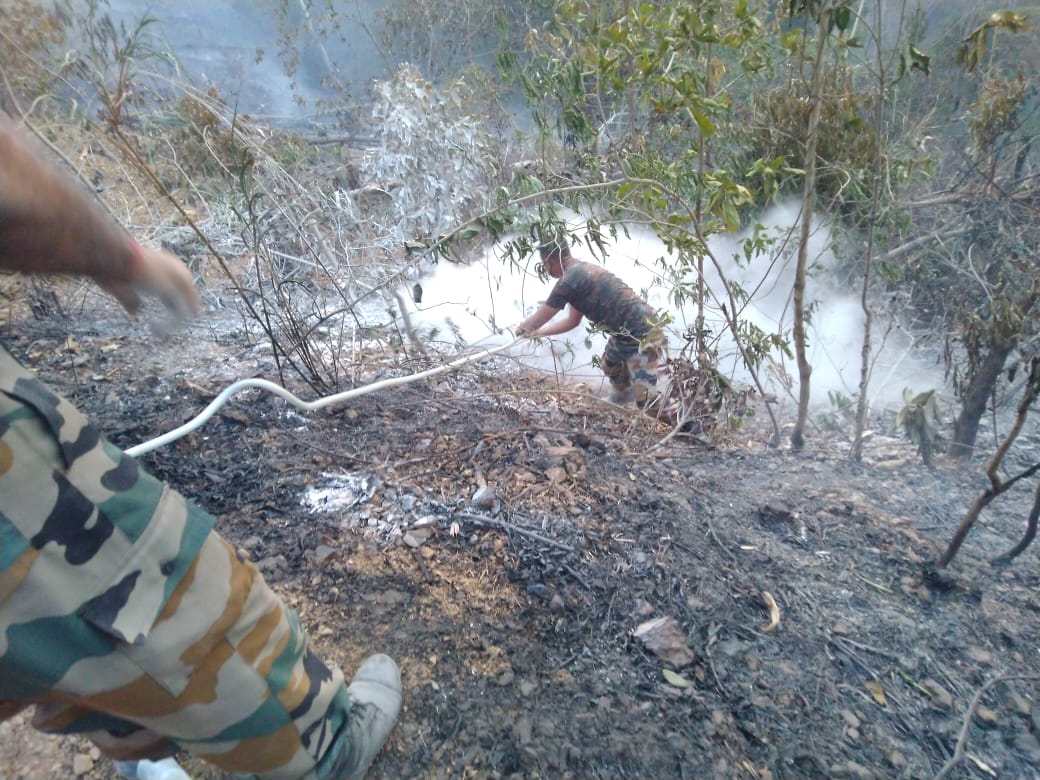 Assam Rifles troops, along with fire fighters and locals, douse the fire that broke out on April 24 in Mizoram. Photo: Twitter/@proshillong

Aizawl: Massive forest fires have broken out in several parts of Mizoram, damaging vast tracts of land and vegetation, forcing chief minister Zoramthanga to seek Central help, an official of the state disaster management and rehabilitation department said on Sunday.

No human casualty has, however, been reported so far but detailed reports are yet to come in from the affected districts, the official said.

Zoramthanga has requested Indian Air Force (IAF) for help and the latter is deploying two helicopters to douse the blaze at Lunglei and surrounding areas, the defence ministry said.

Lunglei is the worst affected and the state government will probe the cause of the forest fire as it is suspected to be man-made, the official said.

At least three other districts apart from Lunglei – namely Serchhip, Lawngtlai and Hnahthial are affected by the forest blaze and firemen have been deployed at several incident sites, he said.

The forest fire broke out in at least eight forest areas near Serchhips Chanmari Veng locality, Chhiahtlang and North Vanlaiphai. Forest fire incidents have also been reported at Darzo and South Vanlaiphai forest areas in the Hnahthial district, officials said.

The firemen are being assisted by Assam Rifles and Border Security Force personnel and local volunteers.

Some settlements or villages are now secured and forest fire have been put under control in some areas but several other settlements are still vulnerable, the official said.

Lunglei district deputy commissioner M. Misael told PTI that a massive forest fire broke at Saisih forest area in the outskirts of Lunglei town between 6 am and 7 am on Saturday.

It spread to Lunglei town on Sunday.

Though the blaze is mainly on in the uninhabited forest area surrounding the town, it has spread to more than l10 village council areas within it, he said.

The fire is under control in the settlement areas but some village councils are vulnerable as the fire is still burning in their surrounding areas.

The DC said that dry vegetation due to scanty rainfall coupled with strong winds have made the flames very strong.

Police said that the forest fire has also broken out in surrounding areas in Mizorams southernmost Lawngtlai district, bordering Myanmar.

At least 12 houses were gutted at Bungtlang South village in the district by the fire, which was spread from the forest on Sunday, the police said.

“On the requisition of the State Government of Mizoram, @IAF_MCC is deploying two Mi-17V5 helicopters, equipped with Bambi Bucket, to douse the major fire in Lunglei district and adjoining areas,” the Ministry of Defence tweeted on Sunday.