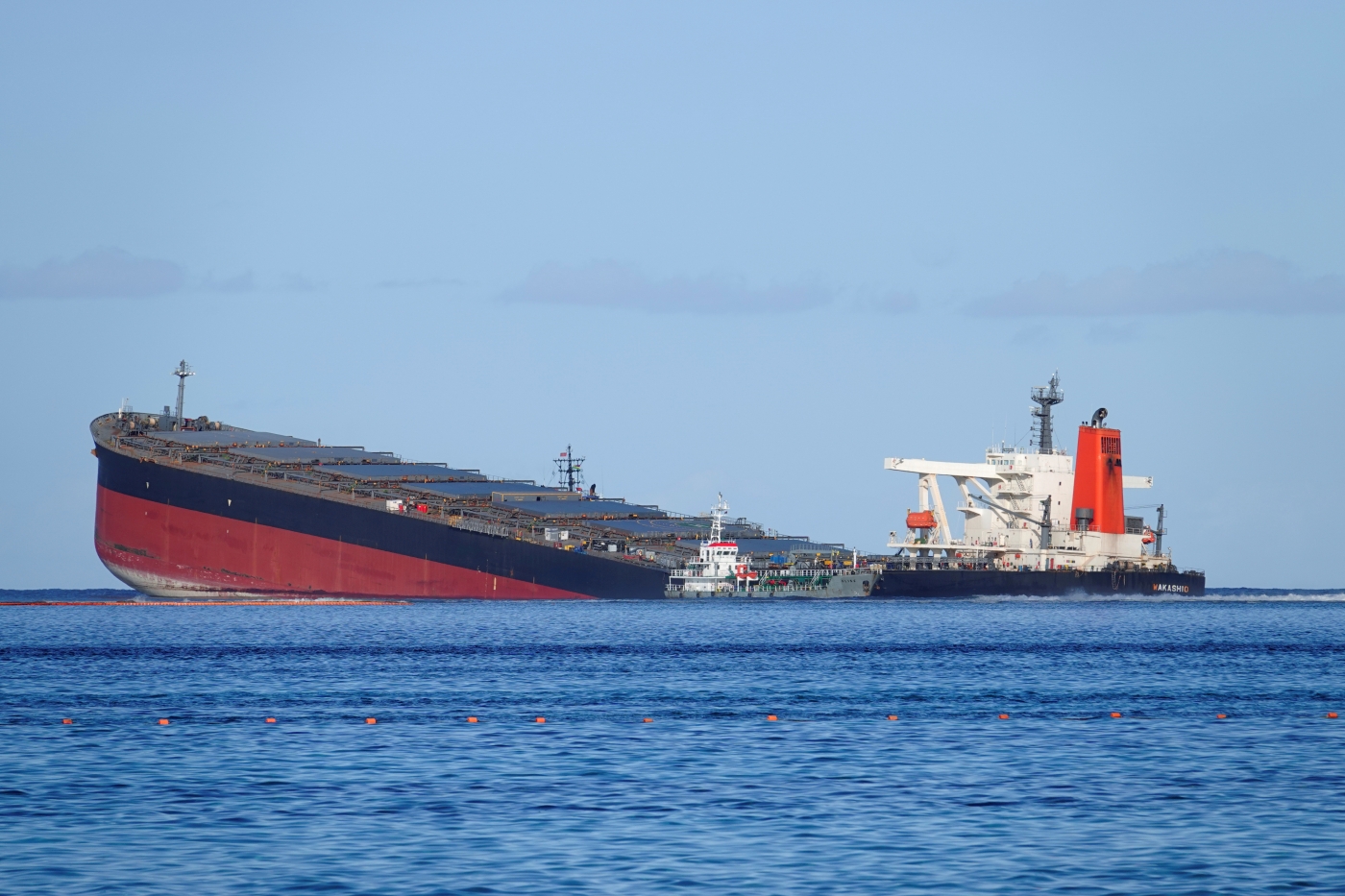 A view of the bulk carrier ship MV Wakashio that ran aground on a reef at Riviere des Creoles, Mauritius, August 11, 2020. Photo: Reuters/Reuben Pillay/File Photo.

Tokyo: Japan’s Nagashiki Shipping said on Friday the grounding of one of its large bulk carriers that caused an ecological disaster in Mauritius was due to a lack of safety awareness and a failure to follow rules as it pledged better training and oversight.

The findings were assumptions based on interviews with crew members, the company said.

A bulk carrier owned by Nagashiki and chartered by Mitsui OSK ran aground on a reef in Mauritius in July and began leaking oil, causing an ecological disaster in the pristine seas around the Indian Ocean island. Four people died when a tug sank during attempts to retrieve oil in the ocean.

“There was a lack of awareness of the dangers of navigating close to the coast … and insufficient implementation of regulations that must be observed in order to safely execute voyages,” the company said, based on its interviews with crew members.

Also read: What Do the Coastal Disasters of Beirut and Mauritius Have in Common?

The company will ban private use of cell phones during working hours on bridges and install high-speed communications systems on all its ships, as well as beef up training, it said.

The company has also started installed monitoring cameras on the bridges of some of its ships for testing and will consider doing so on all of them.

The Wakashio ran aground on July 25 and began leaking oil on August 6, eventually spilling 1,000 tonnes of fuel oil into the ocean.

The clean-up, which includes returning 30 km of mangrove coastline to its former state, will likely be mostly completed by January, Nagashiki said last month.

The Wire Science@TheWireScience
3 Following 14.4K Followers
ICYMI: Though the strains, which are missing one or two key genes present in the wild African swine fever virus, do… https://t.co/sHt19vvdRV
6 hours ago
1
Astronomy and physics, which offer glimpses of the farthest reaches of the universe and perhaps shed light on ancie… https://t.co/R8qydbmJly
7 hours ago
During the COVID-19 pandemic, PhD students lost precious data needed to conclude their theses and meet project obje… https://t.co/fq160Cattp
18 hours ago
5 5
It's true that the nilgai is responsible for significant damage to crops across large parts of northern India. Howe… https://t.co/hwufzaci3i
19 hours ago
1
ICYMI: India has gifted vaccine candidates to neighbours and partners such as Bangladesh, Nepal, Bhutan, Seychelles… https://t.co/EAIZHCOqXk
20 hours ago
Though none of India’s territory directly falls in the Arctic region, it is a crucial area as the Arctic influences… https://t.co/Nyl75CBWTG
23 hours ago
2 2
Egypt has unveiled a significant new archaeological discovery at the Saqqara necropolis south of Cairo, including 5… https://t.co/ishg5D2y3U
24 hours ago
2 6
The division bench said, “Out of six members at least four members may not have expertise. Was there an application… https://t.co/yAADRkOafc
1 day ago
2 4
In a new series, Shyama Rajagopal @ShyamaRaj10 will focus on the ground realities of Ayurveda as it is practiced to… https://t.co/JHXgu29q7t
1 day ago
1 4
The Rajasthan government's decision to scrap middle agents between itself and private clinics is worrisome because… https://t.co/Cn6siTiRRC
1 day ago
4 4
A paper published in The Lancet on January 21, 2021, describes the results of Covaxin’s phase 1 clinical trial. Muc… https://t.co/z3sw9SOBZt
1 day ago
13 27
Only a third of Indians surveyed said they wanted to get vaccinated right away. https://t.co/Fu0E4kFZJs
3 days ago
3
ICYMI: Washington formally left the Paris accord last year but its role as a heavyweight in global climate negotiat… https://t.co/zGdzcR9Gcf
3 days ago
If claim after claim fails to live up to the hype that surrounds it, scientists worry that the public will feel let… https://t.co/UYsFOXoPFq
3 days ago
3 3
The puppeteer that drives the magnetic field is Earth’s core, the superheated heart of our planet, which burns as h… https://t.co/KW1V17lGv6
3 days ago
1 6
Contact us