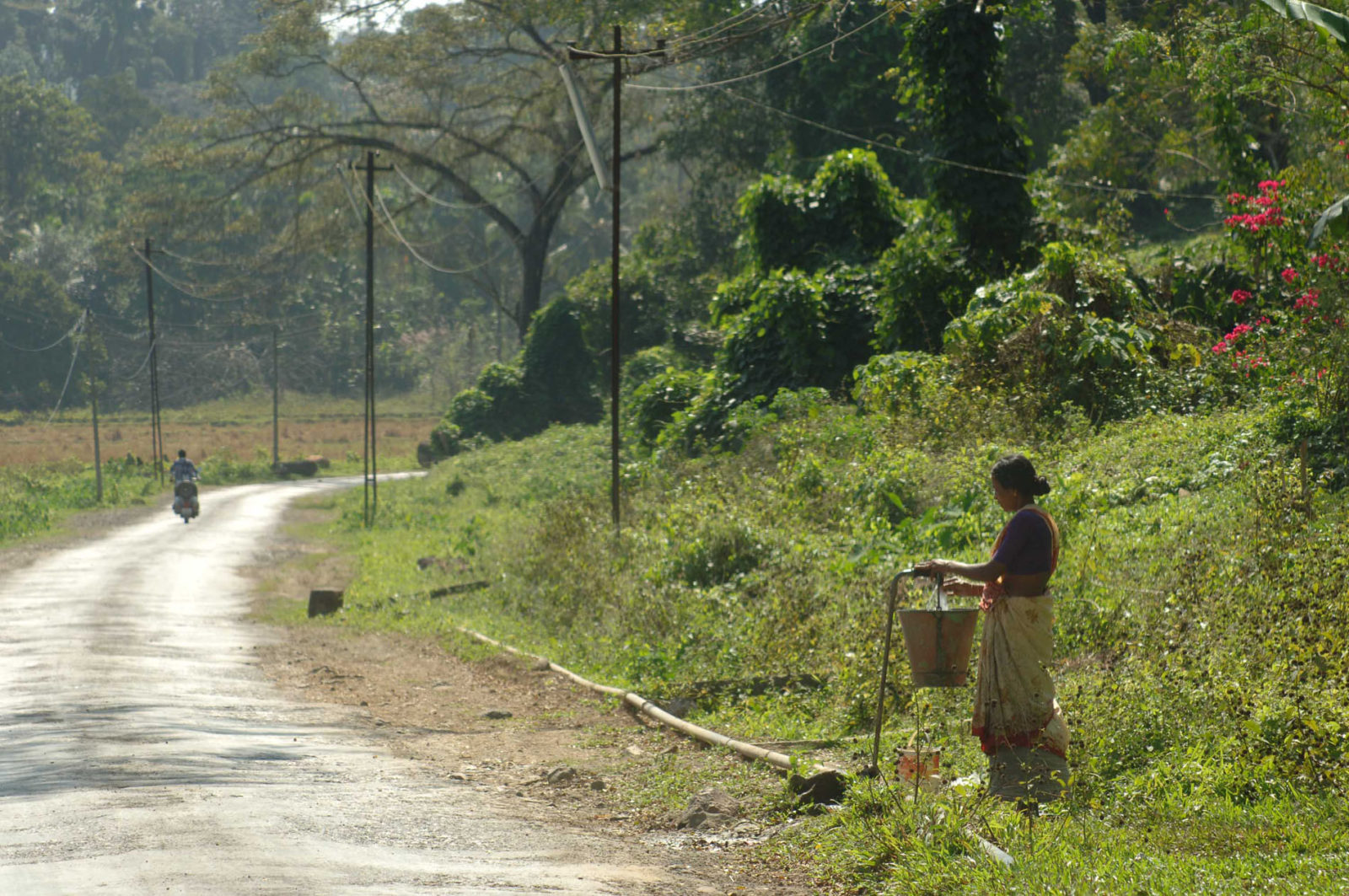 For How Long Will Van Gujjars Have To Seek Legal Remedies for Their Livelihood Practices?

A woman collects water with a bucket in a village in the A&N Islands. Photo: publicresourceorg/Flickr, CC BY 2.0

Bengaluru: The NITI Aayog has developed a Rs 75,000 crore vision for the ‘Holistic Development of Great Nicobar Island in Andaman and Nicobar Islands’.

The plan entails the development of a transshipment terminal with a greenfield international airport, townships and solar and gas-based power plants.

But for the sweeping view of the future the plan takes, it misses the existence of at least 15 Nicobarese villages along the island’s west coast, Manish Chandi, a social ecologist and conservationist who has worked in Andaman and Nicobar for two decades, told The Wire Science.

The island has two indigenous groups – the Nicobarese and the Shompen, a forest-dwelling community.

A consulting agency named Aecom India Private Limited prepared a pre-feasibility report in March 2021 that recognises only seven revenue villages on Great Nicobar, but not the tribal villages.

The agency’s oversight – and by extension the NITI Aayog’s – “is problematic and unfair” for the island’s important inhabitants, Chandi said. According to him, the plan wouldn’t be fair or holistic if it doesn’t account for these people.

The Nicobarese inhabited Great Nicobar’s west coast. The island’s government relocated them to Campbell Bay, an area on the island’s east, after the 2004 tsunami.

“They have been asking the government to resettle them back to their own homes” on the island’s west “but the local administration has not taken up this issue,” Chandi said.

The NITI Aayog plan also envisages 6.5 lakh people to inhabit the island by 2050. Its current population is only around 8,500. In fact, the total population of the archipelago, composed of over 500 islands but of which around 40 are inhabited, is around 3.8 lakh (2011 Census).

The 76x increase in population is expected to impose a significant ecological pressure on the island and its surroundings.

Zubair Ahmed, a journalist based in Port Blair, called the plan’s projection “a death knell for the already minuscule Shompen tribe and an obvious ecological disaster for leatherback turtle nesting sites.”

The Government of India recognises the Shompen as a particularly vulnerable tribal group. Their current population is around 240.

Chandi also said the plan “goes against the Shompen policy, which the Government of India has accepted.” He alludes to a 2015 policy that he coauthored. It requires the government to:

… recognise the social, ecological and economic diversity among Shompen and aims to eliminate exploitation and dependency on outsiders through phased reduction. [Its] Other aims include promoting health and education facilities, ensuring their wellbeing and integrity by developing channels of ways of communication and consultation and participation only based on their willingness. The policy also emphasises preservation and protection of their cultural heritage, including language.

Earlier this year, the National Board for Wildlife (NBWL) decided to denotify the Galathea Bay sanctuary to develop the transshipment port.

The port idea isn’t new. According to Chandi, previous governments have discussed it as well, “for over 20 years”. But each time, the plan had been junked because it wasn’t economically or environmentally viable and stood to “cause more damage than benefit,” Chandi said.

But this time, it seems set to take off.

The sanctuary is the largest nesting site for India’s leatherback turtles and in the Northern Indian Ocean.

Note that the Wildlife Protection Act 1972 – the parent legislation from which NBWL draws its powers – doesn’t permit the diversion of protected areas, like national parks and sanctuaries, unless the diversion will benefit the area’s wildlife.

The project is also unrealistic given the islands’ prevailing water scarcity. The islands depend on rain for their freshwater needs. The longest river flowing through Great Nicobar, Galathea, isn’t voluminous enough.

“There may not be enough freshwater to sustain a large-scale developmental project over the long run,” Ashwini Mohan, an evolutionary biologist who has worked in the Andaman and Nicobar Islands for a few years, said.

Given so many gaps between reality and the NITI Aayog’s proposed plans, Ahmed, the journalist, called the pre-feasibility report a “sham” because “everything seems preconceived and the paperwork seems like formality”.

“The demand here is for basic infrastructure, like connectivity to Port Blair, schools and hospitals.”

Sources on the island said residents find the power outages a major problem, especially during the monsoons, as well as a paucity of groceries and rice, sugar, salt, diesel and petrol, thanks to irregular ship services. Few vegetables are grown commercially on Great Nicobar, so the island isn’t yet self-sufficient.

Chandi echoed Ahmed’s sentiment, and said the focus should first be to “get water for the 8,500 people who are living on Great Nicobar.”

Whom then does the plan benefit?

When The Wire Science emailed NITI Aayog CEO Amitabh Kant asking for an interview, his colleague Avinash Mishra, adviser (islands development), said “There are no plans of NITI Aayog (sic), we are only a think-tank. There is a Government of Andaman & Nicobar Islands, headed by a lieutenant-governor and a chief secretary. You may like to seek a response from the UT administration.”

However, it was the NITI Aayog that invited a ‘request for proposal’ for “preparation of master plan for holistic development” in September 2020. Aecom’s pre-feasibility report also says it prepared the text “for NITI Aayog”.

To this, Mishra repeated his comment: “As already indicated, NITI Aayog is a think-tank. Any activity relating to development of the area is the responsibility of the Andaman & Nicobar UT administration.” He didn’t volunteer any other information, but it’s not clear how much the think-tank can distance itself from the plans.

A letter by the Andaman and Nicobar Islands Integrated Development Corporation (ANIIDCO), dated March 2, 2021, acknowledged that the pre-feasibility report had been submitted to the Union environment ministry. ANIIDCO is a government body listed as the project proponent for the Great Nicobar ‘development plan’.

The letter adds: “NITI Aayog is engaged in the holistic development of Great Nicobar Island.”

The Wire Science also reached out to AECOM, the lt. governor D.K. Joshi and chief secretary Jitendra Narain. This copy will be updated as and when they respond.