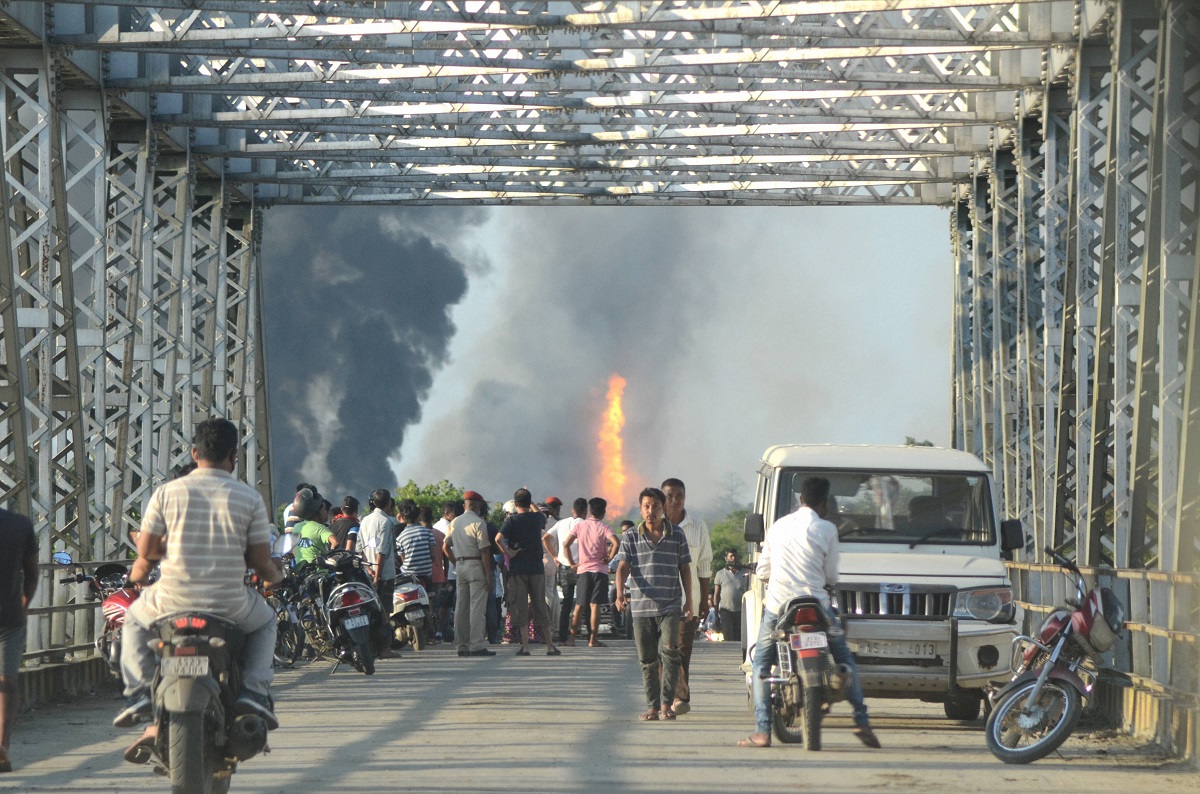 Locals look on as smoke billows from a fire at Baghjan oil field in Tinsukia district, June 9, 2020. Photo: PTI.

Guwahati: A status report prepared by experts has raised several questions on whether there were “lapses” on the part of Oil India Limited (OIL) in preventing the Baghjan blowout, and whether the company wasted “precious time” when symptoms of the blowout first came to light.

The report has been prepared by the expert committee that the National Green Tribunal (NGT) constituted to look into the incident at OIL’s oil well in Baghjan, Assam. The committee is helmed by former Gauhati high court Justice Brojendra Prasad Katakey.

In July, Ajit Hazarika, a former chairman of the Oil and Natural Gas Corporation Ltd., India’s principal fossil-fuel company, had questioned a senior manager at OIL, responsible for drilling services, about why the blowout hadn’t been capped in the first hour, when the signs of a blowout would have been apparent.

The report was submitted on November 3 to the NGT. The Wire accessed it earlier this week. It comprises two volumes: a 47-page summary of the experts’ investigation and observations, followed by a 325-page report that includes affidavits, copies of findings by experts, letters, correspondences and email exchanges, etc. Hazarika had also forwarded all the relevant emails to Justice Katakey, as part of the report-making process, in October.

The report describes a correspondence between Hazarika and Anjan Jyoti Phukan, a chief general manager with OIL, and with other technicians as well, spotlighting the first failures that eventually led to the disaster becoming worse.

On page 32, Hazarika asks Phukan: “It is observed that in the one-hour time after seeing activity [at the site], only one tubing with a hanger cone could be lowered, which was also thrown out by the well pressure and a blowout happened. How and where was this precious time lost? Break it up. Was it that there were no tubing stands…? Where did the tubing stands go? Were the tubing stands of nearly 3,800 metres length broken into singles and laid off?” (lightly edited for clarity).

A similar set of questions follows on page 35.

In between, on page 34, Hazarika also expresses concerns about the whereabouts of a technician when the gas-well was showing signs of a blowout, and his experience. He also lets Phukan know that the OIL team at the site squandered “vital time” when the driller had to telephone higher officials “as no responsible officers were present at the site to guide him”.

“Hazarika is someone who in the past few months has observed vital clues as to what exactly happened. He is an expert on such matters and that is why he has inquired” about specific details, Samudrajit Gohain, a mining engineer and a co-petitioner in one of the petitions against OIL, told The Wire.

Gohain agreed with Hazarika’s assessment that “the disaster could have been prevented when the symptoms were first observed”, and that OIL wasted time that could have contained the blowout before it got out of control.

Mohammad Afreen Rahman, an agricultural consultant and another co-petitioner against OIL, spotted another issue on page 95 of the report. OIL has been cagey about revealing the output of condensates at the Baghjan 5 site. After the blowout, this condensate settled over the soil and plants in the area and contaminated water bodies.

“The condensate issue that OIL has been trying to hide for so long is now out in the open: OIL claims that the total production of condensate from Baghjan 5 is 29 kilolitres per day,” Rahman said. He alleged that if this detail had been known earlier to the people in the area and to the “regulatory agencies managing pollution clearances”, OIL wouldn’t have been able to set up operations in the area.

The Wire reached out to OIL for a comment on the report. “All I can say is that OIL will defend its position,” a spokesperson responded. “OIL is waiting for the final report, which is due to be submitted in December.”

Niranta Gohain, an eco-tourism propagator from Natungaon, a village neighbouring Baghjan, hopes that the final report will help the local residents – but he’s also wary. “I have also come to know that some members of the multi-disciplinary panel did not meet many people at the grassroots level,” he said. “There is [much to be desired] when it comes to proper interaction with the affected people.”

Birendra Kumar Chutia, a resident of Purani Motapung, another village near Baghjan, said, “Such reports may seem helpful, but in the longer run, how effective they will be remains to be seen. Some of the affected people are aware of the expert panel and the report, but they don’t understand what help they will receive.”

Note: This article was edited at 1:54 pm on November 11, 2020, to clarify that Ajit Hazarika is a former chairman of ONGC, and not a manager as was previously stated.

Gaurav Das is a freelance journalist.