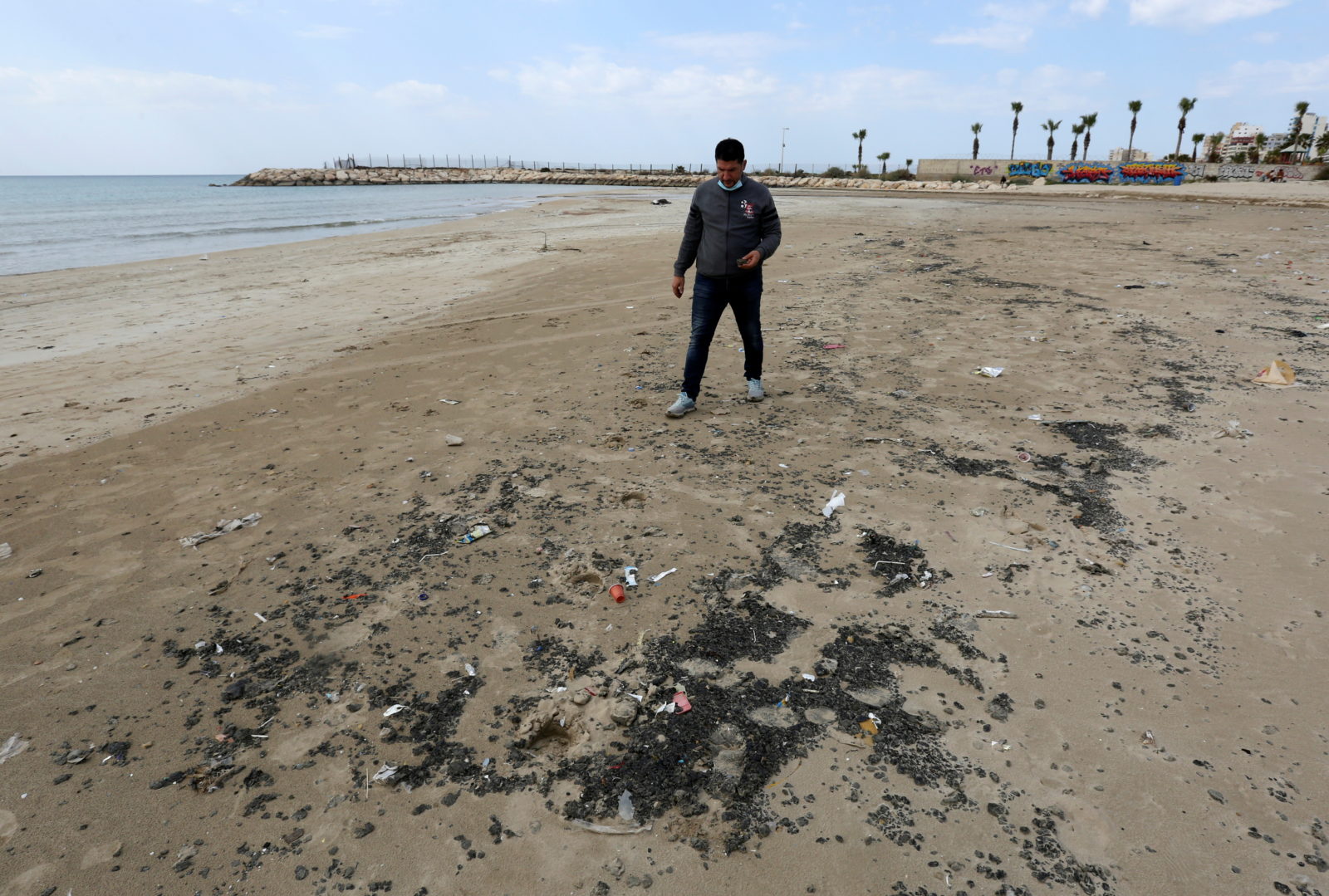 A man walks along a beach in the aftermath of an oil spill that drenched much of the Mediterranean shoreline in Tyre nature reserve in Lebanon. Photo: Reuters/Aziz Taher

Beirut: Lebanon’s caretaker prime minister Hassan Diab said on Monday he was following up on an oil spill that may have originated from a ship passing near the Israeli coast and has now reached the southern shores of Lebanon.

Israeli officials said on Sunday they were trying to find the ship responsible for the spill that drenched much of its Mediterranean shoreline with tar, an environmental blow that will take months or years to clean up.

Lebanon’s Diab has tasked the defence minister, environment minister and the National Council for Scientific Research with the follow-up, a statement from his office said.

The sticky black deposits that showed up on Israeli beaches were visible on Monday on beaches in a nature reserve in Tyre, south Lebanon.

The United Nations interim forces in Lebanon will be informed to draw up an official report, the statement said.

Israel is looking as a possible source at a Feb. 11 oil spill from a ship passing about 50 km (30 miles) offshore.

The Wire Science@TheWireScience
3 Following 15.2K Followers
The Soyuz MS-17 spacecraft carrying NASA astronaut Kate Rubins, a microbiologist who in 2016 became the first perso… https://t.co/0ma905Hj8x
14 hours ago
1
The visionaries like Vikram Sarabhai and Govind Swarup who conceived of great projects are well known in India. S… https://t.co/EtGL3sN5fG
15 hours ago
1
India’s response to its new COVID-19 epidemic is going through an inflexion. It was most prominent when the govern… https://t.co/8YQ9HqOzi3
16 hours ago
3 8
India is likely to receive an average amount of rain in the 2021 monsoon, the state-run weather office said, raisin… https://t.co/SJBN2z2VvB
17 hours ago
1 2
The Centres for Disease Control and Prevention recommends that everyone – vaccinated, recovered or otherwise – wear… https://t.co/X9HhFNoZfo
18 hours ago
5
Search operations are still underway to find those declared missing following the Uttarakhand disaster on February… https://t.co/EMW5f6UfFx
19 hours ago
1 2
The city’s main Muslim graveyard for victims of COVID-19 is running out of space, according to authorities, as case… https://t.co/IWg1hYYU0y
20 hours ago
1 3
As scientists and advocates call to keep carbon in the ground, a mainstay of obtaining more oil in southwestern US… https://t.co/Ag5evOQuak
21 hours ago
4
There is consistent, strong evidence to prove that the SARS-CoV-2 virus, behind the COVID-19 pandemic, is predomina… https://t.co/TB3a9XKiKp
22 hours ago
4
What does the current wave spell for the weeks ahead? In a conversation with @MitaliLive, Professor Srinath Reddy… https://t.co/pcToIe0T3W
23 hours ago
7 15
“They are dragging the bodies like animals from the mortuary to the truck and then from the truck onto the funeral… https://t.co/KKbwMlOuLj
1 day ago
2 5
“More than one year into the COVID-19 pandemic, the failed response in Brazil has caused a humanitarian catastrophe… https://t.co/1iik1nOksF
1 day ago
2
"The speed with which infection has spread means that health systems are being overwhelmed, leading to avoidable de… https://t.co/cHdz4hiTQE
1 day ago
3
During the first wave, reports of large-scale underreporting appeared from across the country. Although this surg… https://t.co/n1wtAYUZ6x
2 days ago
1 3
Some social psychology models have found that carefully designed communication strategies can harness self-interest… https://t.co/7dWnIMSnXN
2 days ago
1
Contact us