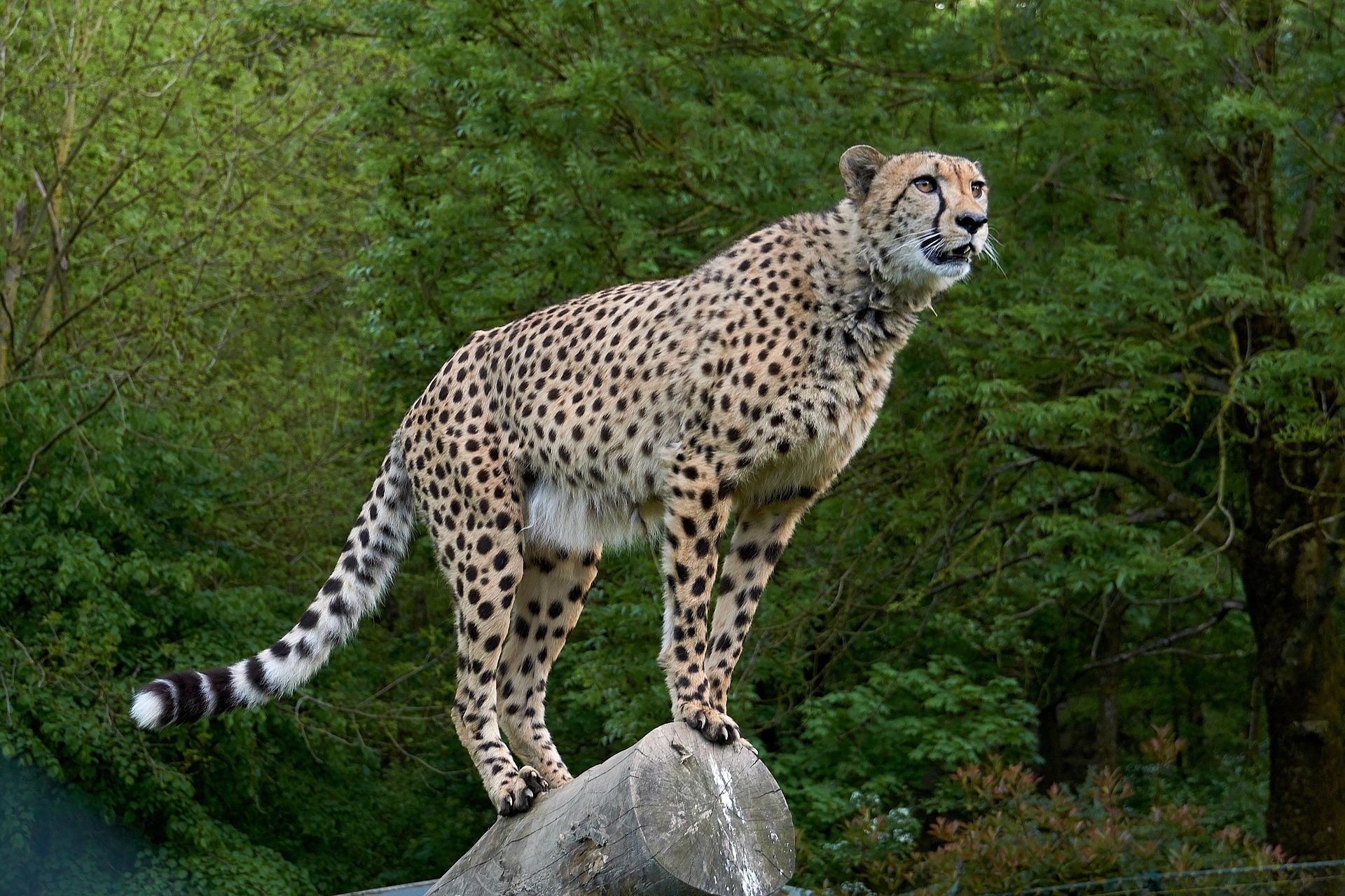 A New Day, a New Killer Pandemic, Right? Not Exactly.

A cheetah stands on a rock. Photo: Glavo/pixabay

Kochi: India’s Project Cheetah is on.

The first batch of African cheetahs will reach Gwalior from Windhoek, Namibia, today. Prime Minister Narendra Modi, whose birthday it is today, will formally set off the programme by releasing three cheetahs into an enclosure at the Kuno-Palpur National Park in Madhya Pradesh.

Eight satellite-tagged cheetahs from Namibia – five females and three males – will have reached Kuno by 7:30 am. It will be the first time that a large carnivore is introduced to a different continent. Around 50 cheetahs will be introduced this way over five years.

What’s in store for the cats, and for the people who share their land with them? “We’ll just have to see” appears to be a constant refrain – whether about the very survival of the cheetahs or the benefits their arrival might accrue to local communities.

The cheetahs will be here after more than a decade of efforts by the Indian government, started by the UPA government in 2008, to “bring back” these animals to the country. Hunting and habitat loss decimated the country’s cheetah population. By the early 1950s, hunters had brought down the last of the wild cheetahs.

In January this year, the government released an action plan for cheetah introduction that said India would import 12-14 wild cheetahs from Africa (Namibia or South Africa) and introduce them in Kuno. On July 20, India signed an MoU with Namibia to “establish” the African cheetah in India.

Once the cheetahs touch down in Kuno on September 17, three will be released into one quarantine enclosure and five will be released into another, Project Cheetah chief S.P. Yadav said. These enclosures are to separate the cheetahs from other carnivores in the region for a month as a disease prevention measure, Y.V. Jhala, dean of the Wildlife Institute of India, Dehradun, told The Wire Science.

The enclosures have been a hassle for the local forest department. Since it set them up, the department has had to remove four leopards that snuck in by capturing them or by chasing them away using captive elephants. The episodes raised questions about whether an enclosure into which leopards could enter could also keep diseases out. Jhala, however, said the enclosure is predator-proof and that the leopards had been accidentally fenced in.

As it happens, predators of similar size, like leopards and tigers, can compete with cheetahs because they track similar prey, researchers said. Leopards have also been known to prey on cheetahs in Africa, and the latter avoid leopards when they can. Wouldn’t that be a problem for the cheetahs once they’re released from the enclosure and into Kuno proper?

Jhala, a member of the Project Cheetah mission team in India, didn’t think so. “Cheetahs live with lions, leopards, spotted hyena and wild dogs in Africa,” he said. “I don’t see how leopards are seen as a problem.”

But other experts have raised several questions about the project – all the way down to its need.

In fact, according to one July 2022 news report, authorities have already altered the existing scrub and grassland habitat to welcome cheetahs by removing thorny bushes and introducing palatable grasses like marble grass and themeda grass, and some wild legumes.

Big cat experts, including scientist Ravi Chellam, who has studied and worked to conserve Asiatic lions in Gir for decades, have also asked why the government has prioritised the introduction of the African cheetah – which is not native to India – over the Asiatic lion, which is restricted only to Gujarat.

In 2013, the Supreme Court had directed officials to relocate the lions to Kuno, but that hasn’t happened yet. Others, like tiger biologist Ullas Karanth, have called Project Cheetah a “hare-brained project which has no ecological viability” – since Kuno can only support around five cheetahs based on population densities observed in Africa even in the best of habitats: 1 cheetah per 100 sq. km.

In addition, reintroducing cheetahs into unfenced reserves, such as at Kuno, instead of to fenced ones hasn’t been successful within Africa, said Arjun Gopalaswamy, founder and chief scientist of Carnassials Global, an organisation that provides science advisory services to governments, universities, etc. in Africa and Asia.

Another related problem is that African cheetahs (Acinonyx jubatus jubatus) is a subspecies that occurs only in southeastern Africa. India on the other hand was home only to the Asiatic cheetah (Acinonyx jubatus venaticus). This distinction matters because the African cheetah is around 25-30% larger, Gopalaswamy said, so its “prey preferences will differ”.

We also don’t know what their home range requirements will be. In the Masai Mara reserve in Kenya, Gopalaswamy and his colleagues found the cheetah’s typical seasonal home range – the area it uses regularly in search of food and mates – was around 800 sq. km. Gopalaswamy said it could be larger in other parts of Africa.

The study, published in 2021, reported that cheetahs adapt to fluctuating prey resources across the Mara during the annual wildebeest migration. Males moved across a larger area because they needed to find prey as well as to defend territories and find females.

With no fences around the 748 sq. km Kuno sanctuary to keep the cheetahs in, the animals could reach nearby villages, Gopalaswamy said, and that there is a high chance of conflict with people (through livestock depredation). We’ll just have to wait and see, he added.

But cheetah mitras like Sultan Jatav, who lives in Paira, a village just outside Kuno, are not too bothered. He is confident the big cats won’t attack people.

The National Tiger Conservation Authority, under the Union environment ministry, has designated almost 200 people in the area as ‘cheetah mitras’1. Their task is to increase awareness of cheetahs in the community. And villagers are “happy” and “excited” about the cheetahs’ arrival, they said – for several reasons.

For Dharamsingh Mogiya, a BJP supporter in Taparpura village just on the outskirts of the sanctuary, the cheetah’s coming is a matter of pride and that he’s looking forward to them putting Sheopur on the map.

Jatav, a 26-year-old school teacher, said the cheetahs will boost local tourism as well – in line with the prime minister’s view.

But there is a catch. The tourist infrastructure is coming up on the southern side of Kuno, including the main access gate of Tiktoli, and the eastern side – home to several relocated villages – has been ignored in the process, according to Asmita Kabra, a social scientist and professor at the School of Human Ecology at Ambedkar University, Delhi.

“This area requires more tourism infrastructure so that relocated villagers can benefit from it, as well as skill development so that people here can be equal partners too.”

“There is politics even in that,” Jatav said. “The caste you’re from plays a huge role. Other Backward Caste groups will get preference over Adivasis.”

A village called Bagcha in Sheopur district is already slated for relocation, to make room for the cheetahs. And among the village’s residents, the Sahariya Adivasis – a ‘particularly vulnerable tribal group’ – have already been displaced. They depend on the forests nearby for their livelihoods and cultural sustenance, and the move spells disaster for them.

As it happens, there have been many relocation programmes in the region. Since the late 1990s, 24 villages, including Jatav’s, were moved out of the park to make way for the Asiatic lions. The lions never came.

Many of the residents of Sheopur are also not well off, whereas land prices have skyrocketed in the area over the last few months, according to another source. The cost of one bigha2 has gone from Rs 50,000 to between Rs 4-5 lakh.

Even the safaris planned for tourists are prohibitively expensive – which is to say that many of the people who are being moved away for the cheetahs won’t be able to see these animals.

Also read: When We Speak of Human-Wildlife Conflicts, Who Are the Humans?

Moving out for cats

Sita Garg runs a small shop in Bagcha that trades in non-timber forest produce (NTFP), like resin from the local chir tree (genus Boswelia). He will have to move out in two months, as soon as the ongoing rains stop.

He hopes to set up a shop in the new village of Bamura, in Karhal tehsil, and also take up farming. But the land in their new home will be rocky and less productive, another Bagcha resident told PARI, and people will be away from the trees.

A 2009 study by Kabra and others found that NTFP is a crucial source of livelihoods for Sahariya Adivasis in the area and that relocation would lower their incomes. “I don’t see any efforts to make good for the people who will be affected by the cheetah project,” she told The Wire Science.

“Yes, we were upset that we had to leave our homes inside the forest when the lions were coming,” Jatav said. “Living outside the park has its advantages and disadvantages, too.”

But right now, the cheetahs are on Jatav’s mind, and he is excited. As a cheetah mitra, he will take part in Project Cheetah’s inauguration by Prime Minister Modi, where he expects to lay eyes on a cheetah for the first time.

“I hope to write a letter to Modiji, thanking him, and wishing him on his birthday,” he said.

But he said he will make a request too: that Modiji also act to provide livelihoods and employment for the local people.