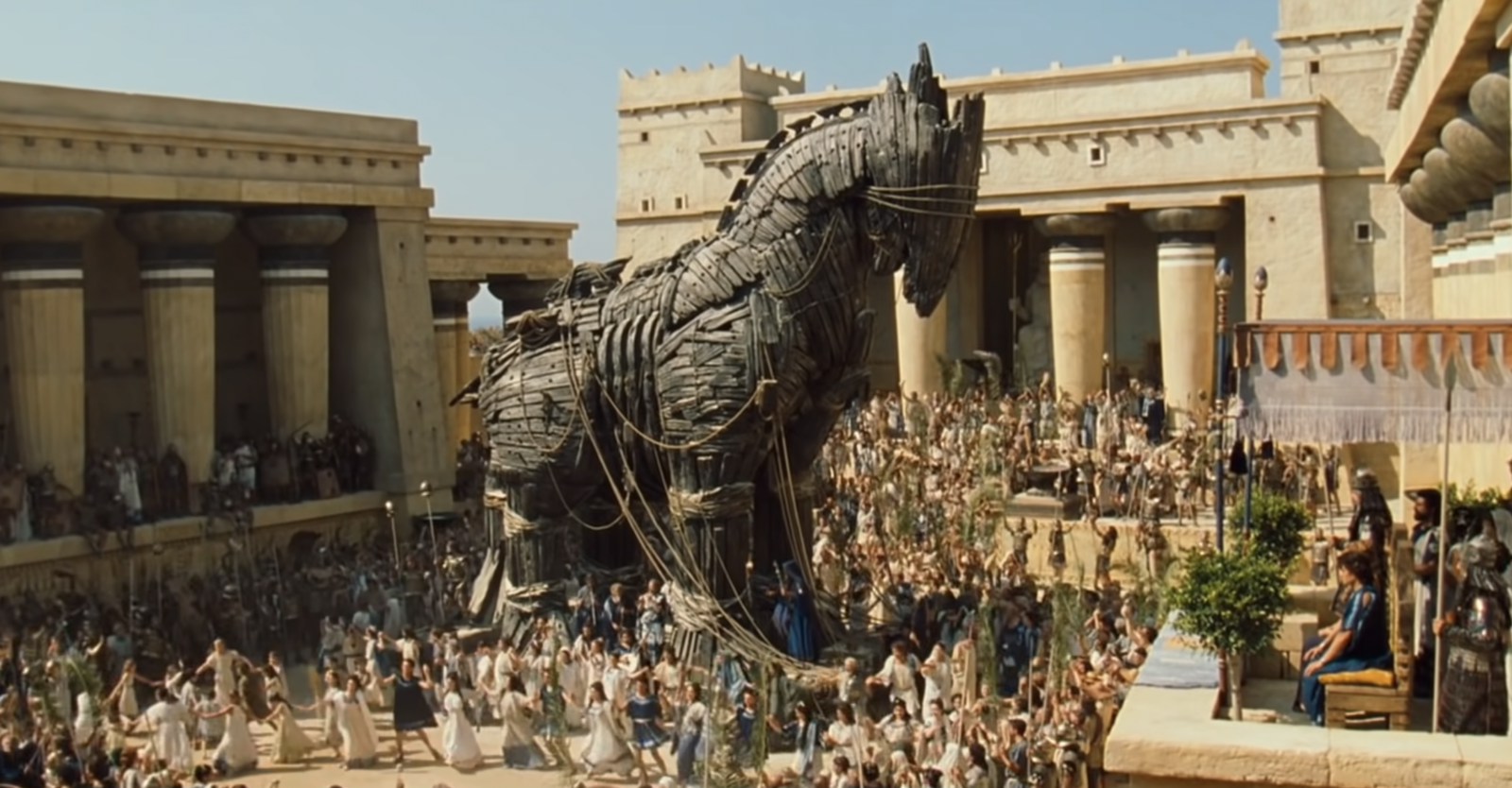 A scene showing the Trojan horse from the 2004 film Troy. Source: YouTube

These are some of the adjectives policy researchers and legal experts are using to describe a new amendment to the Biological Diversity Act 2002, which Union environment minister Bhupendra Yadav presented in the Lok Sabha on December 16.

According to its amendment’s statement of object and reasons, the Biological Diversity Amendment Bill 2021 seeks, among other things, to bring in more “foreign investment” and “fast-track” the research and patent application processes required to make use of India’s biological resources.

A biological resource is any plant, animal or microorganism – including their parts, genetic material and by-products – that has any known or potential scientific or commercial application.

However, it says nothing about protecting biodiversity itself. Some of the proposed changes mean communities will still remain vulnerable to exploitation, according to researchers and legal experts, even as the instrument works in favour of AYUSH moguls like Baba Ramdev.

The Act aims to conserve India’s biological diversity, ensure biological resources – including genetic resources and traditional ecological knowledge – are used in sustainable fashion, and that the benefits accrued from their use are shared with local communities in a fair and equitable manner. The last bit is formally derived from the ‘Access and Benefit Sharing’ model defined by the Nagoya Protocol.

To achieve these goals, the Act has a three-tier, decentralised system. Biodiversity Management Committees (BMCs) at the level of local self-government bodies such as panchayats implement conservation activities. These include developing ‘Peoples’ Biodiversity Registers’ that document the flora, fauna and associated traditional knowledge of people in the area.

At the second level, State Biodiversity Boards (SBBs) advise their respective state governments on issues related to biodiversity conservation and sustainable use.

And at the national level, the National Biodiversity Authority (NBA) oversees it all. Specifically, according to the Act, the NBA is to perform “facilitative, regulatory and advisory functions” to conserve genetic resources and ensure benefits are shared fairly – including issue permits to use certain resources.

For example, if a business wants to use a particular plant that grows in a specific place, it has to apply for permission in some cases from the NBA. The NBA will in turn get inputs from the respective SBBs and BMCs to analyse the application. Using a resource usually entails paying the NBA a fee and, according to the Act, this money finds its way back to local communities that shared the resource or knowledge.

In theory, a win-win.

However, the Biological Diversity Act has really often been a win-lose. In some cases, businesses haven’t obtained permissions for resource use. In others – such as the story of the ‘wonder drug’ jeevani and the Kani tribal community in Kerala – local communities haven’t received any benefits from sharing their resources or knowledge.

Indian companies have challenged the concept of benefit-sharing with local communities. In 2019, for example, yoga guru and businessman Baba Ramdev’s company Divya Pharmacy – after a long court battle with the Uttarakhand SBB over sharing benefits with locals – challenged the SBB’s right to demand a fair and equitable benefit share and whether such a rule could be imposed on domestic companies.

Environmentalists have also noted that BMCs have outsourced the creation of People’s Biodiversity Registers to private firms, effectively excluding locals from the process.

The Act also suffers from “serious ambiguities in its regulatory as well as punitive mechanisms”, environmental law and policy expert Alphonsa Jojan wrote in 2017.

The changes proposed in the Biological Diversity Amendment Bill 2021 fail to directly address many of these issues. According to the statement of object and reasons, the Bill’s purpose is to ease certain provisions of the Act for “foreign investment” and to “facilitate fast-tracking” of research and the patent application process.

One change the new amendment proposes pertains to a provision under the extant Biological Diversity Act – that any corporate body, organisation or company that is not registered in India, or whose management or shareholders include foreign nationals, will need to seek approval from the NBA. The Bill changes this portion to say “foreign-controlled companies” incorporated or registered in India will need to seek approvals for resource-use from the NBA.

That is, the new Bill doesn’t talk of companies registered in India that have foreign stakeholders or management needing approval from the NBA.

If the Bill is passed, this change will significantly dilute the restrictions that currently exist for companies that are registered in India and whose management or shareholders include foreign nationals, Debadityo Sinha, a policy researcher at the Delhi-based Vidhi Centre for Legal Policy, told The Wire Science.

As a hypothetical example, a company under foreign management but registered in India wouldn’t need to seek permission from the NBA to use a specific resource and develop a product from it – say, a drug extracted from the leaves of a specific plant. And without the NBA’s cognisance, any monetary benefits that arise from sale of the product won’t reach the local communities that have taken care of the ecosystem where the plant grows and shared their knowledge about it.

An official statement from the Delhi-based public interest environmental law group Legal Initiative for Forest and Environment (LIFE), went a step further and said the Bill appeared to have been sought for the “sole intention” of benefitting the AYUSH1 industries.

The devil in the details

One way that AYUSH industries will benefit is by removing the term “bio-utilisation” in the Bill, according to LIFE.

Currently, the Act defines “biosurvey and bio-utilisation” to include “survey or collection of species, subspecies, genes, components and extracts of biological resource for any purpose and includes characterisation, inventorisation and bioassay” (chapter 1, section 2).

But in the amendment, the word ‘bio-utilisation’ has been removed, and ‘bio-survey’ has been redefined to mean the “survey or collection of taxa, varieties, genes, components and extracts of biological resource for any purpose”. The change, as proposed in the Bill, would mean bio-utilisation wouldn’t fall in the ambit of the Act anymore.

This deceptively simple edit has a significant implication. As a result, the studies and tests that researchers use to understand physical, chemical and other characteristics of a resource – say, a plant or an insect – or the potency of a substance (by measuring its effect on biological matter) have all been eliminated from the Bill, leading to uncertainty about how they will be regulated.

The statement from LIFE thus called the omission “regressive”.

The amendment also seeks to replace several terms and modify definitions, many of which will change the character of the Biological Diversity Act in crucial ways. For example, another amendment is the proposed substitution of terms like “biological resources or knowledge” with just “results of research”, in Section 20. Technically, this means anyone who has once obtained permission from the NBA will be free to transfer the biological resource or knowledge to any third party without any restrictions or the cognisance of the NBA, Sinha said.

“This is really a very problematic dilution and will defeat the whole purpose of the Act,” he told The Wire Science.

For example, if a firm has the NBA’s permission to access a particular seed that has potential medical benefits, the firm can’t share the results of its research on that seed without the NBA’s permission. But under the new Amendment, nothing will stop it from commercialising the seed itself – and its associated traditional knowledge – if it wishes to.

Other problematic changes, according to LIFE, include the Bill’s pitch to exclude registered AYUSH practitioners from the purview of the Act – i.e. freeing them from following the Act’s protocols and from its benefit-sharing model. (As it stands, vaids and hakims who practice indigenous medicine are already exempted from seeking permission to access biological resources under the Act.)

Robbing communities to pay the Centre?

The proposed amendment also changes the administrative structure currently in place to implement the Act, according to Priyadarshanan Dharmarajan, an entomologist and senior fellow at the Ashoka Trust for Research in Ecology and the Environment, Bengaluru. It introduces the post of a ‘member secretary’ in the NBA, effectively creating two “power centres” – the other being the existing position of the chairman of the NBA – at the top.

Per Dharmarajan, this would allow the Union environment ministry to wield more control over the NBA.

In addition, he added, the Bill – just like the existing Act – doesn’t empower BMCs in any way either. Many states have constituted BMCs but the bodies don’t really have any power because they haven’t been allotted funds. So, according to him, the role they can play remains negligible.

“What we need is an entirely new legislation that is not regulatory but is implemented with the participation of local people especially gram sabhas and panchayats,” he told The Wire Science. If local communities are empowered, and capacity building done, they will get more benefits including learning how to build entrepreneurships.

Indeed, the law continues to be top-down in its design and also bolsters its focus on streamlining commercial access to genetic material and people’s knowledge, said Kanchi Kohli, an environmental policy expert and senior researcher at the Delhi-based Centre for Policy Research.

In a tweet on December 18, she had called the Bill a “missed opportunity” to reconcile the BDA with the ‘free and prior informed consent’ requirements of the Nagoya Protocol.

“The local [community] continues to be vulnerable in the regulatory super structure of the Biodiversity Act,” she wrote in an email to The Wire Science.

Strengthening the provisions of community-based biodiversity governance and conservation of areas important for biodiversity would have benefited the Act, she said. “It also needs to, among other things, reconcile the requirements of institutionalising prior informed consent of indigenous and local communities as well as clarify how non-monetary benefits can be designed.”

Researchers, including Kohli, have also pointed out that looking at benefits purely in terms of their monetary value could be a big problem – and this is the only kind of benefit the Act provides for at present. They have said that doing so often flattens biodiversity or knowledge to a “legal contract” between a raw material provider and a developer. All other ecological, cultural and social meanings are lost.

The Biological Diversity Amendment Bill 2021 has also been introduced without seeking public comments required under the Pre-Legislative Consultative Policy, according to LIFE.

One of the requirements of this policy, which the government adopted in 2014, is that whenever the government introduces a bill, it must place a draft version in the public domain for at least 30 days. This hasn’t been done for the Biological Diversity Amendment Bill yet.

As The Hindu has reported, such lapses appear to be a recurring feature with the current government. Since 2014, when Narendra Modi’s first term as India’s prime minister began, the Centre has introduced 301 bills of which 227 have been presented without any prior consultation. At least 40 of the 74 bills that the government did place in the public domain for comments didn’t adhere to the 30-day period.

At the same time, the Bill has only been introduced in Parliament. According to a senior environment ministry official quoted in Hindustan Times, the ministry will publish it for public comments and provide a month’s time to respond.

On December 17, Rajya Sabha member and former environment minister Jairam Ramesh wrote to the Lok Sabha speaker protesting the Bill being referred to a ‘select committee’ instead of to the standing committee under the environment ministry – which is the norm.

“The motivations are obvious,” he added in his letter.