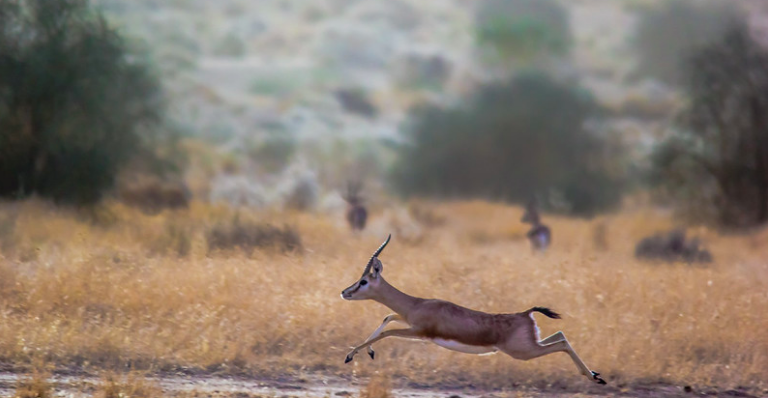 During the first week of April 2020, the Rajasthan forest department nabbed four people suspected to have killed hundreds of chinkara (the Indian gazelle) and other protected species over the past several years. The latest incident they are suspected to be involved in is the poaching of three chinkara, Rajasthan’s state animal.

The four accused, who belong to the local Bhil tribe, live near the Desert National Park (DNP) in the Jaisalmer region, one of India’s largest national parks, located close to the India-Pakistan border.

This breakthrough in ongoing chinkara poaching could also lead to further revelations on poaching and trafficking of other wildlife, like the supply of spiny-tailed lizards to southern India from this region.

Assistant Conservator of Forests (ACF), Rajasthan government, Balram Sharma, who led the team that nabbed the accused, informed that the incident in the Pokharan region of Jaisalmer in Rajasthan came to light after they received a tip-off about the poaching of chinkaras on April 2 from the local Bishnoi community, which is known for protecting animals.

“We got information about the poaching of chinkaras near Ramdewra village (Pokharan). A team was sent to the spot, which discovered remains like head, skin and other body parts of three chinkaras – two male and one female. Subsequently, one of the accused was arrested from his house in the nearby area along with some remains of the animals, including meat. They had shot the animal with a gun which we recovered from them. Following that, three more accused were nabbed over the next few days,” Sharma said.

He revealed that some of the accused already have more cases of poaching registered against them. “They used to hunt the animals and then eat their meat and bury away their remains. They have been doing this for years now and kill animals like chinkaras,” said Sharma. Chinkara or the Indian gazelle (Gazella bennettii) is among the list of animals that has the highest protection under India’s Wildlife Protection Act 1972.

Asked if they used to supply meat of the hunted animals to the local hotels preparing non-vegetarian dishes, Balram Sharma said, “no such connection has been established as of now but we are investigating all possibilities. We are looking to find out the full chain involved.”

The ACF said that they are yet to establish the exact numbers of animals killed by the accused over the years. The initial investigations show that the accused have been operating in the area for nearly a decade. During the investigations, it emerged that the four accused used to hunt nearly every alternate day.

“They are estimated to have killed several hundred animals or even a thousand (over 10 years) as they used to kill one – mostly chinkara – every few days. We are also investigating to find if they used to supply some parts of animals (to those dealing in animal parts) as well,” Sharma said, while explaining that the region has a healthy thriving population of chinkaras as there is no top-level predator like a tiger in the area.

The Thar Desert in Rajasthan which includes the Desert National Park is also among the tentative list of sites submitted by the Indian government to the United Nations Educational, Scientific and Cultural Organisation (UNESCO) to be declared as a world heritage site. Declared a protected area in 1980, the Desert National Park (DNP) covers an area of 3,162-kilometre square and falls in the extreme hot and arid region of a very low rainfall zone.

Many species of mammals, birds and reptiles are found in the DNP. Among the wildlife found in the national park are the Indian spiny-tailed lizard, dwarf gecko, Persian gecko, desert monitor, dozens of bird species including the critically endangered great Indian bustard and chinkara, desert fox, desert cat, hairy-footed gerbil and long-eared hedgehog.

ACF Balram Sharma said “it is a vast habitat” and “the population density is very less in this area and sometimes one house is more than a kilometre away from the other one.”

“But the forest department has been vigilant and especially during the lockdown imposed by the Indian government as protection of forest and its resources including wildlife are included in the list of essential services. Our teams have intensified patrolling during both day and night time to protect wildlife as there is a huge risk of poaching during this time,” Sharma added.

Environmentalist Sumit Dookia said that since the last two and a half years, he along with many local community volunteers, has been gathering information on any poaching related cases in this part of the Jaisalmer district.

“This work was part of a long term wildlife monitoring and conservation project of the great Indian bustard. In the last two years, we were able to locate many spots where the spiny-tailed lizards were regularly hunted. While narrowing down the information and finding the culprit, we were able to pass information to the forest department and successfully four cases were booked in the last two years. This current chinkara poaching case is interestingly related with the same gang of culprits,” Dookia said.

He said that they believe that this case is a big breakthrough in cracking a national level network of supplying spiny-tailed lizards to southern India, where the desert-dwelling reptiles have been confiscated multiple times.

“A thorough investigation on these lines is required and hopefully the forest department will be able to crack the same chain from these notorious chinkara poachers,” said Dookia.

This story first appeared on Mongabay. Read the original here.