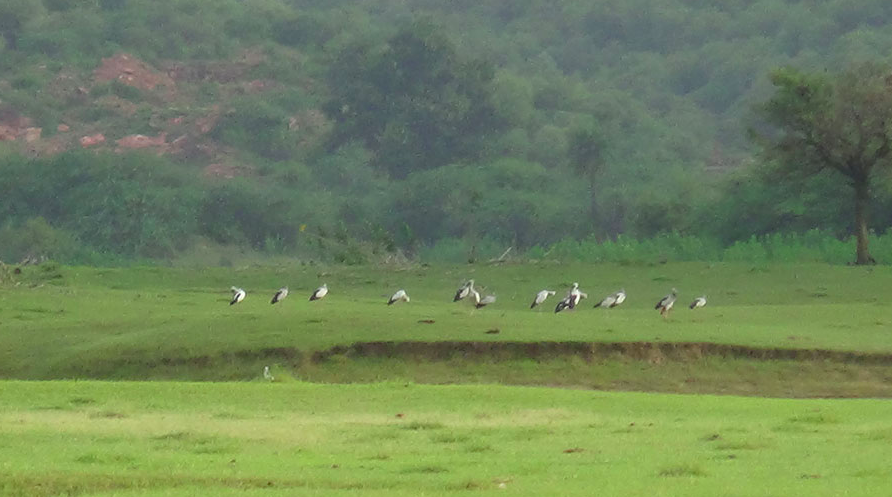 To End Suffering, Blow up the Universe: A Dodgy Philosophy of Human Extinction

New Delhi: The construction of the Ram temple in Ayodhya could soon result in the denotification of a wildlife sanctuary in Rajasthan so builders can mine the area’s pink sandstone.

Indian Express has reported that on the Vishwa Hindu Parishad’s insistence, the Rajasthan government has sought the Centre’s okay to denotify the Bansi Paharpur block of the Band Baretha wildlife sanctuary. The state has categorised the matter as being of “highest priority”.

The area has been rich in wildlife for over a hundred years. The government built a dam in the late 19th century over the Kakund river, one of the four principal rivers of Bharatpur district, at Baretha. The 200 sq. km surrounding the dam were declared to be a wildlife sanctuary in 1985. Today, the area is a popular tourist destination and is especially popular among birdwatchers – with some 200 species of birds, and only 43 km from the Bharatpur Bird Sanctuary. Band Baretha is also famous for its nilgai, leopards, wolves and boars.

However, sandstone mining in the area has expended rapidly since the 1960s and continues to this day, even though it’s illegal and even though the government banned mining here in 2016.

Mongabay had reported recently that of all the states in India, Rajasthan has the largest geographical area under the mining sector and has the highest number of mining leases in the country – 33,122. Most of the sandstone mines and quarries are in Jodhpur, Bundi, Alwar, Bharatpur, Karauli and Bhilwara.

The red and pink sandstone was the material of choice for some of Rajasthan’s most elaborate palaces as well as for the Red Fort and the Akshardham temple in Delhi.

Express quoted a former mine-owner who operated in the region; he claimed that the pink sandstone from Bansi Paharpur block is more expensive than the reddish pink sandstone found elsewhere because the colour is visibly lighter. The Mayawati administration used this sandstone to construct elephant statues across Uttar Pradesh as well.

It reportedly costs Rs 500 per cu. ft. And according to Express, as much as one lakh cu. ft of the Bansi Paharpur variety of pink sandstone had been sourced for the Ram temple in 1989 itself. (This was well before the Babri Masjid, which stood where the temple is being built today, was destroyed in 1992.)

In September this year, the Bharatpur district administration seized 25 trucks loaded with pink sandstone, cutting off the supply of this illegally mined resource in the grey market. Sharad Sharma, a Vishwa Hindu Parishad (VHP) spokesperson, told Express that building the Hindu temple was the “nation’s work” and that the Rajasthan government should allow mining at Bansi Paharpur on these grounds.

This argument is noticeably similar to one made by an office in charge of forests in Uttarakhand – asking the Centre to ‘transfer’ a portion of the Rajaji National Park to the Kumbh Mela Samiti, so the samiti could organise the famous Hindu festival here next year.

D.J.K. Sharma (no relation), the additional principal chief conservator of forests, had written to the state principal secretary (forests), “Since Kumbh Mela is an important festival as per the Hindu traditions, the Central government must consider temporary use of forest land for non-forest purpose as an exception and get it issued through [Forest Advisory Committee].”

Sharad Sharma said nearly half of the carvings for the temple’s ground floor had been completed. His rationale for using the pink sandstone from the sanctuary over other sources was that work on the temple has been going on continuously since the 1980s. The temple’s architect told the newspaper that it wouldn’t be “aesthetically pleasing” to mix other varieties of sandstone with the “king of sandstones”.

The state joint secretary of mines, O.P. Kasera, has asked the director of mines to apply for denotifying the Bansi Paharpur block on the Union ministry’s Parivesh portal as a matter of “highest priority” on October 23. However, neither Kasera nor the state’s forest department disclosed any telling details to Express.

But the superintending mining engineer in charge of Bharatpur circle P.S. Meena said that the groundwork for denotification was nearly ready.