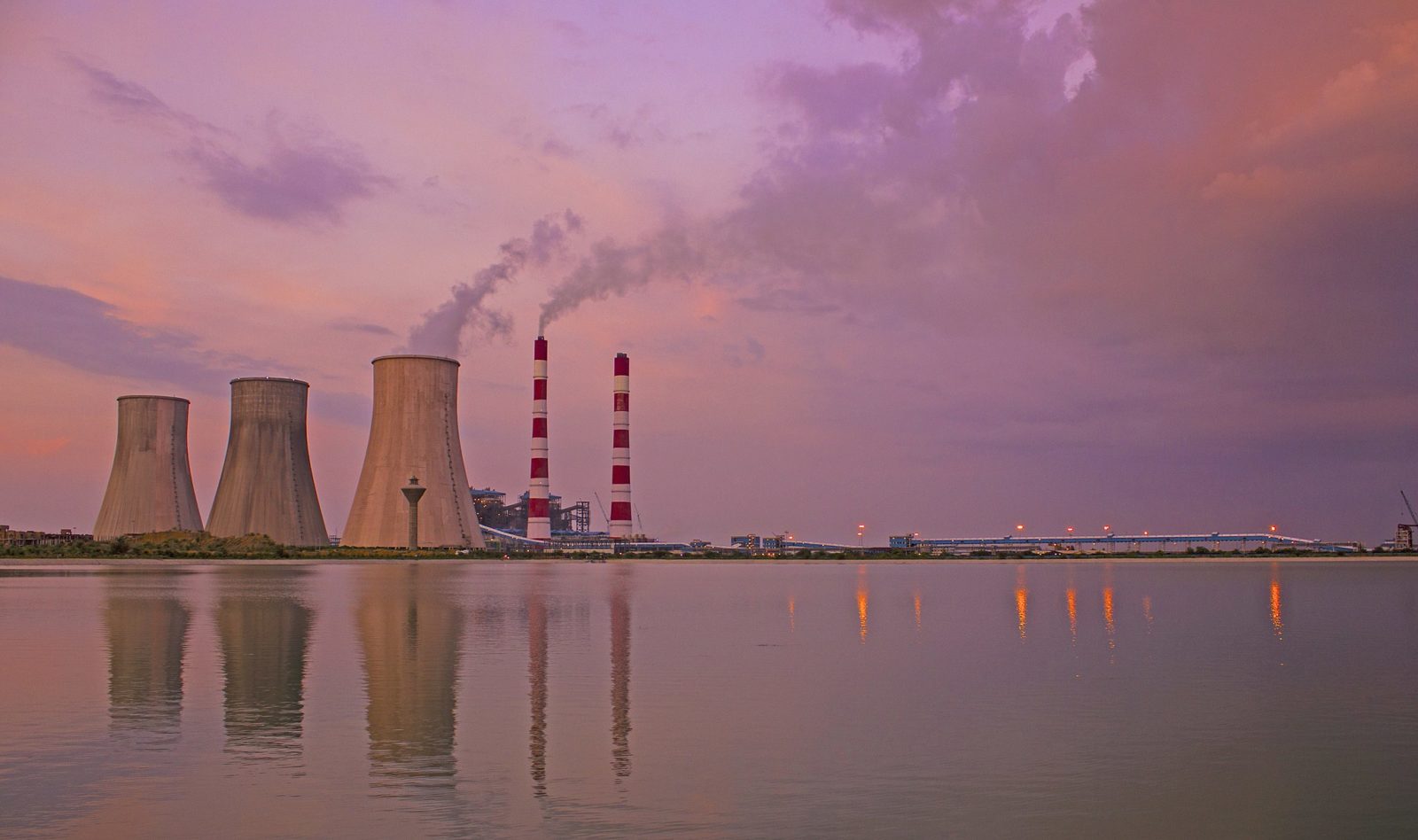 Addition of carbon capture and storage (CCS) technologies to reduce emissions could stress water resources in a vast proportion of coal-fired power plants in India that are already exposed to water scarcity, a study has warned.

“CCS technologies are energy and water-intensive processes. Retrofitting CFPPs with CCS will lead to a substantial increase in freshwater consumption for India. Irrigated agriculture is still by far the largest water use in India, but CCS will further strain water resources,” said Rosa.

CCS is considered a crucial strategy for meeting carbon dioxide emission reduction targets. It consists of the separation of carbon dioxide from industrial and energy-related sources, transport to a storage location and long-term isolation from the atmosphere.

Post-combustion CCS, where carbon dioxide is first captured from the flue/fuel gases, is a preferred, economically viable technology to reduce carbon emissions because it can be retrofitted to existing power plants without decommissioning them.

Coal continues to be the mainstay of India’s power mix, contributing to more than 50% of it. With its policies, the national government also makes it clear that this will remain the scenario at least for several years even as the emphasis on renewable grows. India currently has no commercial CCS projects at large scale.

Installing CCS at these facilities requires that they produce additional energy to compensate for the energy used by the CCS process. With that comes additional consumption of cooling water. In addition, the CCS process itself adds to the overall water consumption in a fashion that depends upon the CCS technology deployed, they said.

Factoring in four types of CCS systems, Rosa analysed the potential impacts on water resources that would result from retrofitting large (greater than 100 MW gross capacity) CFPPs with the CCS systems. They are absorption, adsorption (with temperature and pressure swing processes), and membranes.

The finding that 32% of CFPPs are exposed to water scarcity for at least five months per year suggests that these coal-fired units might not be well suited for retrofitting with CCS unless alternative water sources are available, said Rosa.

“We mapped 218 coal-fired power plants in India with a capacity greater than 100 MW,” said Rosa, adding that CFPPs located in other Asian countries are not particularly exposed to water scarcity, because of high water availability and being constructed along the coast to use seawater as a cooling medium.

Agreeing with the findings, coal chemistry scientist Binoy Saikia, who was not associated with the study, also underscored the water footprint in coal washeries for removing high ash content before transport of coal to the power plant.

“The process (CCS) requires high energy consumption and drastic treatments. In India, CCS is not yet fitted commercially in large scale, as far as I know. In a few Indian power plants, fluidised bed combustion is used to reduce the sulphur dioxide emission in few Indian power plants,” Saikia of CSIR-North East Institute of Science & Technology told Mongabay-India.

Ahead of the 2015 Paris Climate Agreement, India had pledged to unconditionally reduce the emission intensity of its Gross Domestic Product (carbon dioxide emissions per unit of GDP) by 30-35% from the 2005 level by 2030, and achieve 40% of its installed power capacity from renewables.

In a 2018 notification, the Ministry of Environment, Forest and Climate Change defined strong limits on the usage of water for inland thermal power plants (TPP). It mandates all old and new inland TPPs to be based on cooling tower technology from 2017 onwards and also proposes a limit of 3 cubic metres per megawatt hours (m3/MWh) for specific water consumption of all inland thermal power plants.

Vaibhav Chaturvedi, an economist who leads the Council on Energy, Environment and Water’s (CEEW) work on low-carbon pathways said the notification on water withdrawal limits for power plants has significant potential to reduce pressure on India’s water resources.

“A failure to implement this policy will result in continuous increase in withdrawals and will put more pressure on India’s water resources. In the long run, however, withdrawals will increase across scenarios due to the growth in underlying electricity generation, but will still be comparable to current withdrawals,” Chaturvedi said.

Disputes over water with India’s neighbouring countries are likely to compound the water stress issue, according to CEEW research. For example, their study states that TPPs dependent on the Brahmaputra for meeting their water needs can expect water stress in a regional rivalry scenario as China is upstream in the river basin.

“India does not have a CCS power plant and so there is no India-specific data on CCS. For India, at this moment what we know from our research is that nuclear power plants have a higher water footprint compared to coal power plants,” said Chaturvedi.

“CCS is nowhere right now in India’s discussions. But we have been saying that we should never close ourselves to any technology. Technological innovation has an important role in making technologies less water and energy-intensive,” said Chaturvedi.

Chaturvedi and co-authors highlight that India might need to think about the importance of dry cooling technology for addressing the trade-offs of the electricity generation – water nexus. The dry cooling technology eliminates almost all the need for water for thermal cooling in power plants, though this is a highly energy-intensive technology. The extra investment required for dry cooling might be worth it if the increasing pressure on water availability in arid regions for India can be exacerbated, they add.

Innovations to remove emissions from power plants is the need of the hour. “We should design new advanced materials to absorb the emitting gases instead of minimising the use of water. Or, conversion of those gases into value-added products by means of a novel catalyst,” Saikia added.

The Wire Science@TheWireScience
3 Following 26.3K Followers
The immunity induced by a vaccine, in terms of its quality and durability, depends on whether the vaccine is ‘live’… https://t.co/bY6SsUJo7Q
8 hours ago
1
“The marshes are our life. If droughts persist, we will stop to exist, because our whole life depends on water and… https://t.co/C4TYx5ISS1
10 hours ago
As Maharashtra’s health infrastructure failed to contain the epidemic, many private hospitals took advantage and se… https://t.co/vL03PmBmo2
11 hours ago
1 1
.@GKangInd expressed concerns about the lack of safety data for the vaccines cleared for use by children in India –… https://t.co/WP5IA0FnoH
13 hours ago
Ivermectin was approved in 1981 for commercial use in veterinary medicine for parasitic infections in livestock and… https://t.co/WPUN7E8ke1
14 hours ago
More than 2,600 experts and concerned citizens from 113 countries signed Kew Declaration on Reforestation for Biodi… https://t.co/hXxROW5Lcc
16 hours ago
2 5
NASA is set on Saturday to launch a first-of-its kind mission, dubbed Lucy, to study Jupiter’s Trojan asteroids, tw… https://t.co/9BYKxuMjph
17 hours ago
1
A pandemic makes epidemiologists of us all. A group of experts discuss issues of statistical design, data collecti… https://t.co/YAEeq8MCe1
18 hours ago
3
China on Saturday launched a rocket carrying three astronauts, including one woman, to the core module of a future… https://t.co/U9WAzmgU1U
19 hours ago
1
Your skin is crawling with microbes, and your armpits are no exception. There is now experimental evidence to expl… https://t.co/d49k2HEF92
20 hours ago
3
The amount of time an animal spends performing different tasks is called its time-activity budget. Two scientists… https://t.co/IfnUvo95jy
21 hours ago
1 1
Some experts have written that the four-year undergraduate programme could revive India’s dying entrepreneurial spi… https://t.co/6ihO55JfAj
22 hours ago
1 4
Ivermectin was first identified in the 1970s during a veterinary drug screening project at Merck Pharmaceuticals.… https://t.co/LlnxePt1xt
1 day ago
1 5
The new Global Hunger Index reveals how about 50 countries around the world are in an alarming or serious situation… https://t.co/CO7WUk2Z5r
1 day ago
2 3
.@GKangInd has said that at this point of time, India shouldn’t consider giving COVID-19 vaccines to healthy childr… https://t.co/PaBzk2B3I1
2 days ago
1 1
Contact us