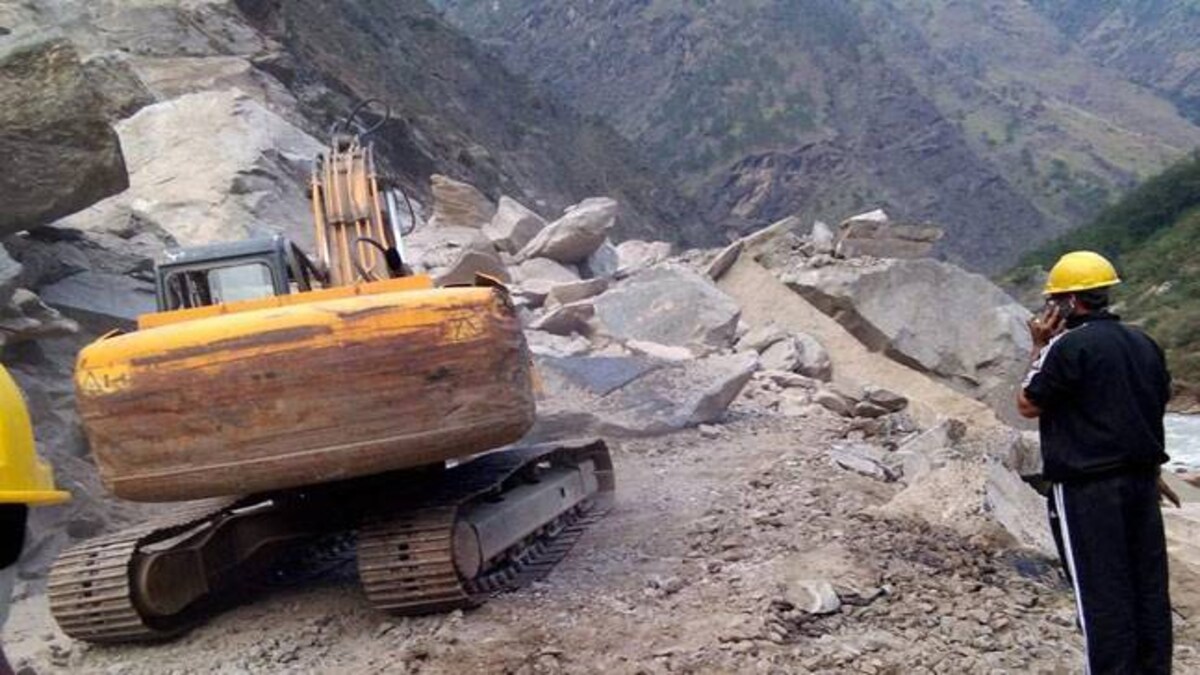 Mountainsides being blasted off and cleared to make way for the Char Dham highway. Photo: PTI.

The present government seems to have completely ignored their own document while trying to implement the Char Dham road project, touted as an all-weather, faster road-link for pilgrims intending to visit some much-promoted Himalayan Hindu shrines in Uttarakhand. It is being constructed by the Ministry of Road Transports and Highways, and includes work to widen about 900 km of highways connecting Yamunotri, Gangotri, Kedarnath, Badrinath and the Tanakpur-Pithoragarh.

The current project seeks to convert the existing narrow mountain road into an eight-metre wide highway to ease motorised travel. In its enthusiasm to promote unrestrained tourism and local employment, the Union government turns a blind eye to the danger that this project is going to unleash on Himalayan ecosystems. The project has not even cleared an environmental impact assessment, as this combined 900-km stretch has been presented in segmented bits each less than 100 km long to escape the rule – a classic case of the fence eating the crops.

The Himalaya, the highest mountain range in the world and a transcontinental majesty, is facing some of the worst environmental issues, with huge implications for the survival for one third of all humans. The home of the largest volume of snow and ice outside the polar regions, this range is also known as the ‘third pole’, and is the source of some of Asia’s major rivers. A key driver in regulating the Asian climate, it is now in grave danger of losing its original splendour and power as a major climatic regulating force thanks to human-induced climate change and global warming.

Temperatures across this mountainous region are projected to increase by several degrees. One consequence will be increased melting of glaciers, which will hamper rivers and trigger massive seasonal flooding followed by dry spells. More recent projections indicate that the region, including Uttarakhand, is likely to lose 70-99% of glaciers by the 2100. Before the world can overhaul energy consumption and generation, as a major first step to control global warming, there are many smaller strides that we can take at local levels to strengthen the sustainability of ecosystems.

We must remember that the unique Himalayan landscape – with steep slopes and sharp gradients – are not inherently amenable to human engineering. They are dynamically heterogeneous and change in their properties, in terms of climatic variables, hydrological processes and biodiversity, at every turn. Any human-induced changes to these local ecological parameters will have their overall impact on stream run-offs and erosional or depositional processes. Considering the vulnerability of the biological and physical features of the Himalayan ecosystems, we must think of how we can reduce the scale of human-induced disturbances at the community and local levels. The Char Dham project goes against just such an environmental outlook and ethos.

Realising the nuances of Himalayan ecology, the mission document on sustaining the Himalayan ecosystem, released by the Ministry of Science and Technology in June 2010, highlights some caveats under the heading ‘Green Road Construction’. While accepting the fact that the roads are the lifeline of remote and inaccessible regions in the mountains’ interiors, it says that construction of roads must fully consider the region’s environmental fragility.

It also states that the concerned state governments should consider promulgating, as soon as possible, the following guidelines for road construction in hilly areas:

1. Environmental impact assessment to be made mandatory for the construction of all state and national roads and expressways of more than 5 km length, including in the extension and widening of existing roads and excluding inter-village roads

2. Road construction should provide for the treatment of hill-slope instabilities resulting from road-cutting, cross drainage work and culverts, using bio-engineering and other appropriate technologies.

Critics have noted that the Char Dham project made room for neither.

When geologists of a panel set up by the Supreme Court to investigate environmental aspects of the project say excavations are being done in an unscientific way, we need to take their complaints seriously. When the chairperson of the panel says implementing agencies are not doing a proper job of identifying vulnerable slopes, and are engaged in hill-cutting without making proper arrangements for dumping the muck, building footpaths and planting trees along the roads, it is time to raise a red flag. The expert members of the panel inform have said the construction work is destabilising the entire valley – a valley already prone to landslides, cloudbursts and earthquakes.

Despite several government agencies, including the Geological Survey of India, identifying the landslide-prone zones, construction efforts have also ignored the mandated safeguards. Consequently, many landslides have already been recorded in places that had not experienced any landslides previously. Villagers in the are have also complained that thousands of tonnes of debris have been dumped carelessly along the roads. This stuff will eventually find its way to rivers and streams, impacting the waters’ original carrying capacity and increasing the turbidity.

The Indian Himalayan region hosts about 8,000 species of flowering plants, which is about 50% of all flowering plants of India. Of this, nearly 30% are endemic to the region. There are over 816 tree species, 675 edibles and nearly 1,740 species of medicinal value here. The Himalaya, with its vast green cover, is also a major sink of carbon dioxide. Annual carbon sequestration by the forests of western and northeastern Himalaya and protective cover for the catchments of the Bhagirathi, Alaknanda and Mandakini valleys – a first line of defence against erosion – are just two important ecosystem services rendered by Himalayan forests.

Almost 50,000 trees are to be felled for the Char Dham project. These include slow-growing, high-altitude trees like deodar (Himalayan cedar), birch and oak.

In fact, an all-weather road in a terrain like the Himalaya is fundamentally a misnomer. This proposed eight-metre-wide freeway will not withstand landslides, floods and earthquakes set to happen in future. The government must first refer to its own guidelines prepared years ago for building roads in the Himalayan terrain. Two experts of the committee formed by the Supreme Court have also submitted a critical rejoinder on the Char Dham Project and defined this road construction work as an act of irresponsibility and disregard towards a highly fragile ecology.

While despairing about the military infrastructure built in fragile parts of the Himalaya, which includes tens of thousands of kilometres of roads, Maharaj K. Pandit, a prominent Himalayan ecologist, recently wrote, “I dream instead of the Himalayan highlands transformed into a peaceful nature reserve, and that the huge public funds squandered on managing conflict are invested instead in infrastructure for health care, education, conservation and welfare.”

As things stand, the Char Dham project is indeed a Himalayan blunder,’ and the government should inform the Supreme Court – which is to pronounce the final decision on the project – of its readiness to seriously rethink the whole project with the help of experts.

C.P. Rajendran is a professor of geodynamics at the Jawaharlal Nehru Centre for Advanced Scientific Research. The views expressed here are the author’s own.