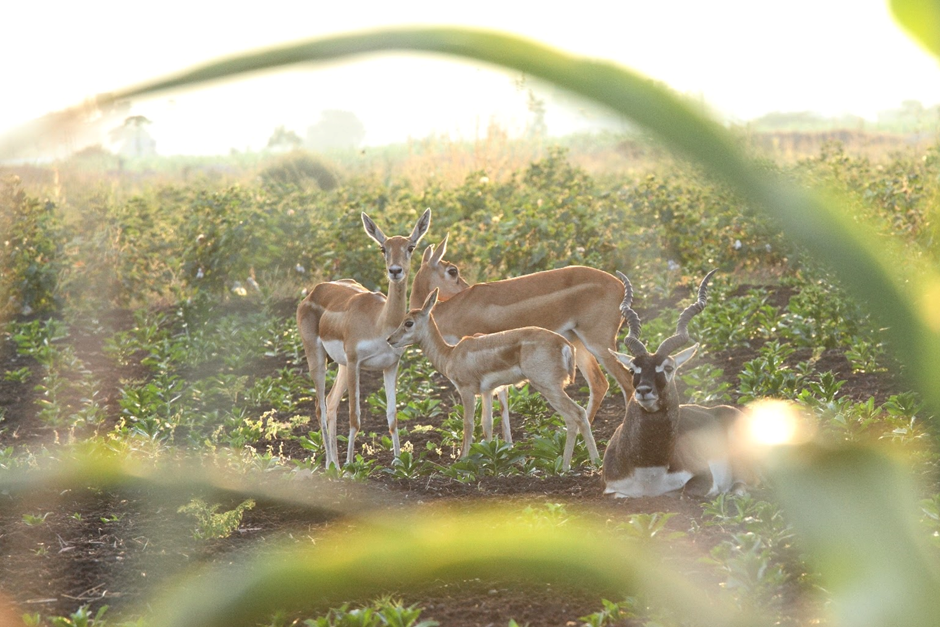 Much of the blackbuck (Antilope cervicapra) habitat is encroached upon, and their survival now depends on our tolerance towards them. Image from an agricultural landscape in Karnataka. Photo: Narendra Patil

Urbanisation that pays scant attention to its biodiversity, and associated ecosystem services, is destroying the Guindy forest in Chennai. The present-day urban sprawl of the city is 200-times larger than the 6 sq. km of the forest that it has engulfed. The biodiversity on this ‘forest island’ is being depleted because of land-use change, even as it continues to be eulogised as Chennai’s ‘green lungs’.

The Gunidy forest restoration has global significance in the UN’s decade for ecosystem restoration and towards meeting the Bonn Challenge of restoring degraded areas the size of India by 2030. But this is likely to be effective through local initiatives that pay attention to human well-being within revitalised ecosystems.

This will also require, in the case of Guindy, a rethink of what it means to restore an urban ecosystem without necessarily having to borrow templates from wild and rural landscapes.

When 55% of the world’s population lives on 3% of Earth’s land, these urban areas are effectively novel ecosystems made up of a complex assemblage of native and non-native species adapted to disturbed habitats. A 2011 study found that a paradigm shift was required for urban biodiversity conservation and that this does not necessarily involve ‘restoring’ an area to an earlier natural state.

The concentration of humans in urban areas requires that they become the centerpiece while restoring urban ecosystem functions. Yet humans can gainfully relegate themselves to insignificance when it comes to stewarding wild areas because natural ecosystems are best for removing atmospheric carbon and restoring biodiversity.

Perspectives that look for ‘natural’ order in ecological restoration underplay the functional aspect of an ecosystem. The purpose is to ‘restore’ or even improve ecosystem services – and not biodiversity per se, to its original state. Some ecologists prefer the term ‘rewilding’ to refer to this kind of stewardship. Because the environment changes under the impact of human use and ecosystems are continuously reorganising themselves, it is not the species composition that is important, but the functional organisation of its operating components.

Humans have modified their environment for so long that it is naïve to say that ecosystem restoration should look for natural references from the past. Even at the scale of the Guindy forest, the Seemai karuvel (Prosopis juliflora) is an invasive species; cheetals are not ‘native’; and the native blackbuck had to be reintroduced at one point. So debates about the removal or retention of these species reveal faultlines in our thinking on ecosystem ‘restoration’.

The present-day Guindy forest patch, to the south of the Adyar river and the north of the Pallikaranai marsh, is part of a narrow strip of about 25,500 sq. km of a unique ecoregion. Stretching along the Coromandel coast, this region is often misleadingly described as “tropical dry evergreen forests”. But it is simply severely degraded coastal forests. It is possible that tall, emergent trees that occurred in these historically littoral forests were lost before the mid-17th century, when parts of them were offered by a nayaka of the Vijayanagara empire to the East India Company.

In this historical context of modifications to Guindy, the reserved forest on the Raj Bhavan estate continues to be degraded through illegal construction and ornamental ‘greening’.

The bigger chunk of the de-reserved forest of IIT Madras is challenged by habitat loss and degradation, yet the institute claims that about 65-75% of its campus has “natural forest”.

There is a commendable effort to reduce the built-up area by removing old buildings and going for multi-story buildings to increase the green space. However, the growing population and increasing number of vehicles on the campus continue to add to the pressure on the ‘green space’. The very perspective of conversion of the “vast brown patch of land” into a green space undermines the administration’s claim.

This brings us to the conflict between two perspectives on what it means to increase the amount of green space. On one hand, ecologists ask to ‘restore’ the area to its original natural state – of Palmyrah trees, scrub and grassland to encourage open landscape fauna like blackbuck. On the other hand, the residents and wildlife club of IIT Madras seem to be advocating a ‘let nature take its course’ approach.

There are profound underpinnings to this difference: the choice is apparently between a conservative and a progressive approach to biodiversity conservation. At least one study, published in January 2022, evaluated the different approaches to manage the invasive Prosopis juliflora on Banni grassland, in a bid to restore native grasslands. It laid bare the complexity of choosing between these approaches to conservation stewardship.

Banni is a 2,500-sq.-km grassland where P. juliflora was introduced six decades ago. Since then it has taken over close to 60% of the area. The grassland degradation and high productivity of P. juliflora have led to socio-economic adaptations in the local community – giving rise to a novel charcoal-based livelihood.

So now the decision to remove Prosopis involves a complex choice between the requirements of pastoralism-based versus charcoal-based livelihoods. According to a survey, 54% of respondents preferred charcoal-based livelihood as the primary occupation and 70% responded with a negative attitude towards the removal of P. juliflora. The study thus doesn’t recommend the removal of the invasive species from this social-ecological landscape.

The abundance of P. juliflora in harsh environments with poor soils, and its utility to poorer communities, has brought the state of Tamil Nadu also into a dilemma, between livelihoods and ecological choices.

Experts believe that it is best to take a pragmatic approach in the local context. In addition, no strategy to control P. juliflora has been found.

‘Prakriti’, the wildlife club of IIT Madras, has been advocating for the preservation of wilderness and encouraging the community of engineers to live in harmony with wildlife. This primarily means resisting the construction of new structures on the natural animal habitat, their conversion into lawns and manicured gardens, and the use of pesticides.

More subtly, they’re also championing the prevention of unnecessary removal of plants and keeping the undergrowth; retaining leaf litter and dead plant matter to enrich the soil; encouraging coexistence with monkeys and snakes; and retaining the unkempt, wild look of the campus. So Prakriti as such seems to be rooting to rewild their environment, instead of restoring it.

Not all invasion is to be scorned, it seems. While invasive free-roaming domestic dogs are disruptive and should be removed from IIT Madras and Guindy national park, the invasive P. juliflora over the years has come to provide habitats for various organisms and its removal will thus disturb the ecosystem.

To quote Fernando Pessoa, “The unnatural and the strange have a perfume of their own.”