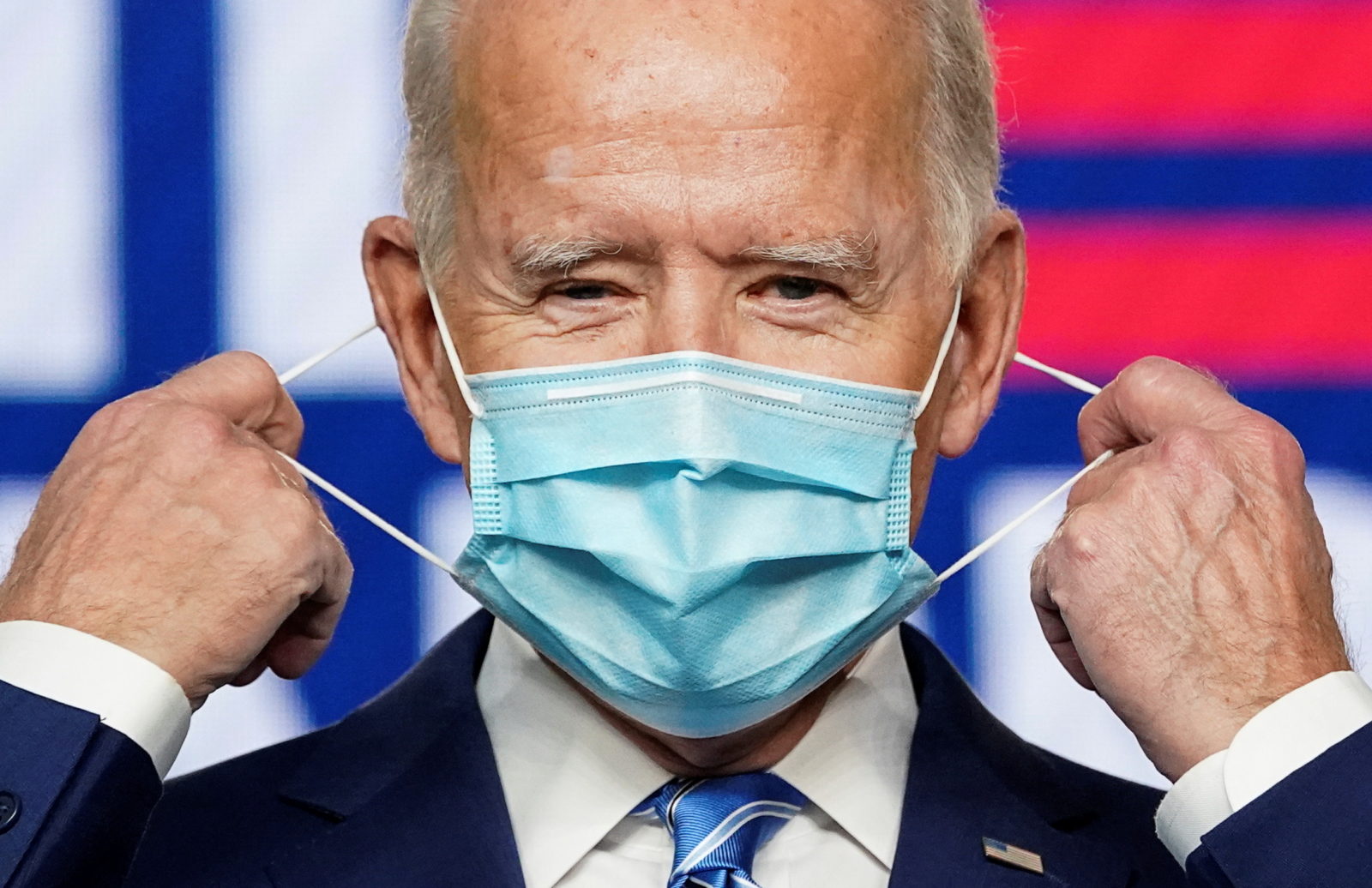 Then Democratic US presidential nominee Joe Biden prepares to speak about the presidential election results at an appearance in Wilmington, Delaware, November 4, 2020. Photo: Reuters/Kevin Lamarque.

The Paris Agreement was so designed that November 4, 2020 – the day after the US presidential election – was the earliest that any country could formally leave the pact. So as the votes were being counted, the US formally exited the landmark climate treaty on Wednesday. Joe Biden tweeted that in 77 days, when he takes office, the country would rejoin the agreement. What would his election as the president of the United States of America mean for climate action in the US and beyond?

Today, the Trump Administration officially left the Paris Climate Agreement. And in exactly 77 days, a Biden Administration will rejoin it. https://t.co/L8UJimS6v2

Since Trump formally communicated his intent to leave the Agreement in 2017, no other country has followed its example of quitting. Thus in itself, the US rejoining the Agreement – a fairly quick process – is unlikely to impact global action. But Biden’s pledge to achieve net-zero emissions by 2050 puts the US’s climate ambition on par with the EU and other developed nations like the UK, France, South Korea and Japan. With the world’s most intransigent climate polluter signing on to a 2050 target, other rich countries may seek to distinguish themselves by committing to end greenhouse gas emissions sooner.

On the international stage, Biden promises to lead a “major diplomatic push” to raise global climate ambition through a world climate summit, push through enforceable international agreements to reduce emissions from shipping and aviation, and embrace the 2016 Kigali amendment to the Montreal Protocol, which promises to deliver 0.5º C reduction in global warming by phasing out hydrofluorocarbons.

The Biden plan also promises carbon tariffs on imports. It remains to be seen if such tariffs, which unfairly affect developing countries are WTO compliant and how they will affect the ongoing US-China trade war.  It also proposes to push China, and the larger G20, to eliminate exports of coal and other high-emissions technologies. And singling out the Belt and Road Initiative, it promises alternative American financing for lower carbon investments to countries that are part of the initiative.

Biden’s own 2050 net-zero target, with its 2035 target for zero-carbon electricity, however, falls far short of what is required of the world’s biggest historical polluter to prevent catastrophic climate change.  Even within the Democratic party, there are influential voices calling for more substantial climate action. For example, while Biden proposes a 100% zero-emission power system by 2035, Bernie Sanders’s plan promised 100% renewable energy by 2030 not just for power but also for transport, the largest emitting sector in the US.

What’s more concerning is whether Biden can indeed achieve his plans, given his continuing ambiguous attitude towards the oil industry. He said in a presidential debate that he would “transition” from the oil industry, but quickly clarified that “we’re not getting rid of fossil fuels for a very long time”, and continues to be a big supporter of fracking for oil and gas.

In Barack Obama’s time as president, from 2008 to 2016, Biden was closely associated with the shale-gas boom. Emitting less carbon dioxide than coal on combustion, natural gas was considered a “bridge fuel” on the road to renewables. Almost the entire reduction in US emissions during the Obama years can be attributed to the shift from coal to natural gas. But a 2035 date for decarbonising electricity is only achievable if no new natural gas investments are made, as the lifespan of any new infrastructure would stretch beyond that date, leaving behind “stranded assets”.

But scientists have also been questioning whether natural gas’s greenhouse gas emissions were lower than coal’s, especially since it’s becoming clear that leaks of methane – a potent greenhouse gas with a global warming potential 25-times that of carbon dioxide – in gas production have been found to be much higher than previously estimated.

In addition to contributing to climate change, fracking also creates significant local pollution issues. Nevertheless, Biden has expressed support for fracking, pledging only to ban it on federal land. But he has pledged to reinstate regulations preventing methane leaks which had been rolled back by the Donald Trump administration.

Biden’s climate plan envisages a federal investment of $1.7 trillion over 10 years, which he hopes will “pump prime” state, local and private investment to a total of $5 trillion. It is questionable whether this is sufficient. To compare, Sanders promised $16 trillion of public investments. Biden also promises to spend about $400 billion on research with a new Advanced Research Projects Agency for Climate (ARPA-C) to focus on grid-scale storage, small modular nuclear reactors, zero global warming potential refrigerants, zero net energy buildings, carbon-free hydrogen production, industrial and agricultural decarbonisation, and carbon capture and storage. Biden’s commitment to nuclear power in particular is significant.

For the auto industry, Biden promises to support the deployment of 500,000 charging stations by 2030, incentivise EVs through tax credits and develop new fuel efficiency standards. However, he has disappointingly failed to set a target for the end of fossil-fuelled vehicles. And much of his $2 trillion post-COVID-19 plan “to build modern, sustainable infrastructure and an equitable clean energy future” is likely to go towards building roads that in turn encourage Americans to buy and use more cars. That plan has a few aspects directed at climate change mitigation, including upgrading building efficiency, sustainable homes and a commitment to provide transit options  o every American city with more than 100,000 residents, through flexible federal investments.

On day one, Biden promises to sign executive orders to establish the 2050 goal. He will “demand” that Congress enact legislation in its first year that establishes an enforcement mechanism to achieve the 2050 goal, including a milestone in 2025, make historic investments in climate and energy research and incentivise the deployment of clean energy innovations. But despite the Biden plan’s promise to hold Congress “accountable” if it fails in its “duty to act”, this seems a difficult task – especially considering that the enforcement legislation is to be based on the ‘polluter pays’ principle, which is sure to make for acrimonious debate. Biden’s ability to act is also circumscribed by his own somewhat thin personal mandate.

This said, Biden’s offer – as its soon-to-be president – to his country and the world on climate change may be better than the mere “we are better than the Republicans”, which is usually on offer by Democrat presidential candidates. The 2050 net-zero emissions target may well put the US’s climate ambition at par with what is increasingly becoming the developed-country mainstream. But that ambition still isn’t enough to prevent catastrophic climate change – nor does it represent a fair share of the global effort for the world’s biggest historical polluter.

The effort required to achieve any target will be particularly gargantuan in the case of the US given its very high per-capita emissions, even by developed country standards, and its fractious politics. But the fate of the planet depends on it.