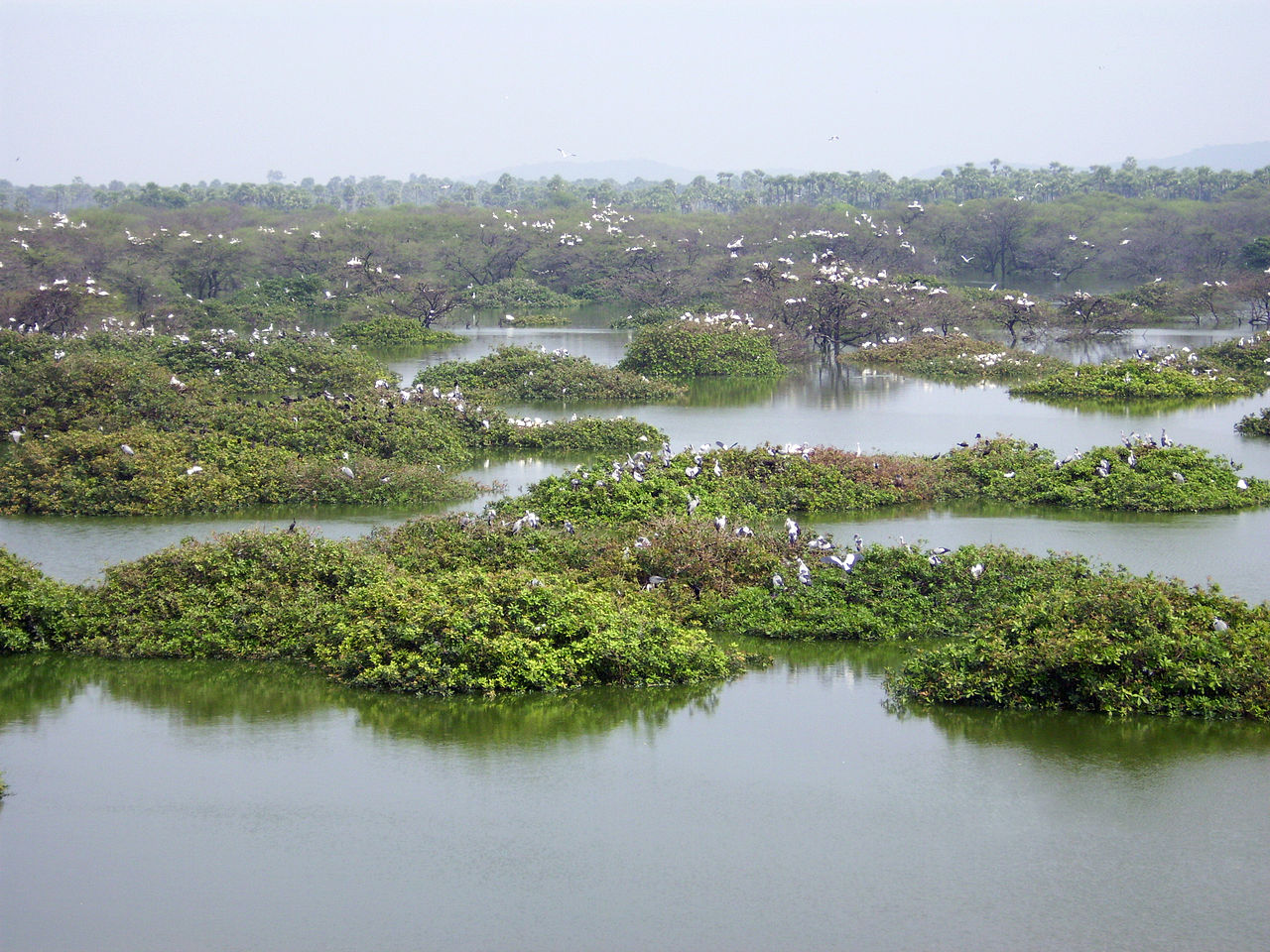 Lessons for Indian Agriculture During a Pandemic, from M.S. Swaminathan

Chennai: On June 3, 2020, the New Indian Express reported a proposal by the Tamil Nadu forest department to denotify a portion of the Vedanthangal Bird Sanctuary, in Chengalpattu district. The article suggested that the move would benefit commercial and industrial developers, such as Sun Pharmaceuticals, which has wanted to expand production at its facility inside the sanctuary.

The issue snowballed into a major controversy. Sun Pharma clarified that it was not acquiring any land and that the proposed expansion would be within its existing factory premises. On June 9, a press release from the Tamil Nadu chief wildlife warden said there has been no move to denotify the sanctuary, and that the current proposal was merely to demarcate the sanctuary and delineate an eco-sensitive zone.

Here’s what you need to know to understand what is happening.

Vedanthangal – a 29.51-hectare irrigation tank – and its surroundings have been protected by local villagers as a heronry and bird sanctuary at least since 1790. A note by John Shortt dated 1864 records how the local villagers saw value in maintaining the sanctuary as the nitrogen- and phosphorus-rich bird droppings nourished the surrounding paddy fields.

In 1962, Vedanthangal was declared a reserved forest under the Madras Forest Act. In 1996, the Government of Tamil Nadu published an order stating its intent to declare the tank and an area within 5 km of the tank’s boundary as a sanctuary under the Wildlife Protection Act 1972. On July 3, 1998, a government order declared the area thus identified to be a wildlife sanctuary, and clarified that the government had received no objections or claims in response to the 1996 order.

From July 1998 and until today, the Vedanthangal tank and the area within 5 km of its boundary have been a part of the wildlife sanctuary, with the full protection of the Wildlife Protection Act 1972.

On January 23 this year, relying on notes put up by the principal chief conservator of forests and the chief wildlife warden, the Tamil Nadu government tabled a proposal with the State Board for Wildlife to denotify an area contained in a circular band within 3 km from the tank.

On March 19, principal secretary Shambhu Kallolikar wrote to the National Board for Wildlife seeking the Centre’s concurrence with Tamil Nadu’s proposal. His letter said “a proposal to reduce the buffer zone of Vedanthangal Bird Sanctuary from 5 km surrounding the main tank area of 29.51 ha to 3 km, in which first 1 km [is] to be notified as core zone including main lake/tank and next 2 km boundary to be notified as buffer zone, and to denotify the outer 2 km zone of the existing 5 km.”

Responding to the New Indian Express, Sun Pharma tweeted on June 8 that it had “no plans now or in the future to expand its manufacturing operations inside the Vedanthangal Bird Sanctuary,” and called the news report wrong. “The company is not buying any additional land either near the plant or inside the sanctuary. We are committed to the preservation of biodiversity and the natural environment of the Vedanthangal Bird Sanctuary.”

People disturbed by the news report heaved sighs of relief on social media – but allegations linking the forest department’s denotification move to Sun Pharma’s expansion plans continued to do the rounds.

On June 9, the Tamil Nadu forest department’s chief wildlife warden put out an undated, unsigned press release in Tamil without the seal of the Government of Tamil Nadu. The key points of the release (translated) were:

However, the communiqués from the principal secretary, Sun Pharma and the chief wildlife warden contain several false claims.

1. The principal secretary’s letter on March 19 makes it appear as though the bird sanctuary had already been demarcated into core and buffer, and that the 5 km zone around the main tank area was actually a buffer zone and has been sought to be redefined by the proposal.

2. The chief wildlife warden’s press release claims that the Centre has directed the zonation of sanctuary areas into core, buffer and eco-sensitive zones, and that the Government of Tamil Nadu’s proposal does not denotify portions of the sanctuary.

3. Sun Pharma’s letter states that their proposed expansion is not within the sanctuary.

The Wildlife Protection Act 1972 contains no reference to core and buffer areas within protected areas. Only in 2006, by an amendment of the Act and with specific reference to tiger reserves, were the words ‘core’ and ‘buffer’ introduced. The core zone refers solely to critical tiger habitat within sanctuaries and reserves. The area around the critical habitat is defined as a buffer zone, where a lower degree of habitat protection is required. This area also falls within and is in reference solely to tiger reserves in India. Other sanctuaries and national parks are to be administered according to the provisions of the Act, and are not required to be demarcated as core and buffer.

In fact, the January 23 letter of the principal chief conservator of forests (PCCF) cites the government order of 1998 to say, “As per G.O. Ms. No. 199 … Vedanthangal Reserve Land/Lake with an area of 29.51 ha and surrounding 5 km area all around (comprising revenue area of 28 villages) was declared as Vedanthangal Bird Sanctuary. And the whole sanctuary is treated as a core zone for management, and there is no buffer zone.”

While the use of core and buffer zones by the PCCF in this case is uninformed, the point is clear: that the entire area contained within 5 km of the tank is an integral part of the sanctuary.

The concept of eco-sensitive zones (ESZs) was first introduced in the 2002 Wildlife Conservation Strategy, which the Indian Board of Wildlife adopted in a meeting in January 2002. Point #9 of the strategy suggested that “lands falling within 10 km of the boundaries of National Parks and Sanctuaries should be notified as eco-fragile zones”.

ESZs refer to the lands outside the protected area that need some degree of protection to ensure the integrity of the sanctuary or national park. The National Wildlife Action Plan 2002-2016 makes this clear: “Areas outside the protected area network are often vital ecological corridor links and must be protected to prevent isolation of fragments of biodiversity which will not survive in the long term. Land and water use policies will need to accept the imperative of strictly protecting ecologically fragile habitats and regulating use elsewhere.”

Proposed denotification is bad in law

There is no provision in law to declare an area within a sanctuary that is not a tiger reserve as a core or buffer zone, and ESZs are to be defined outside the boundaries of protected areas. Denotification of a sanctuary or altering its limits from 5 km to 3 km, in this case, can only be done if it is established that it will aid conservation objectives. It can’t be justified by citing the aspirations of industries operating illegally within the sanctuary’s limits.

Indeed, a number of industrial units, including those of Sun Pharma, Ordain Healthcare and Amco Batteries, operate within the Vedanthangal Wildlife Sanctuary’s 5 km boundary.

Even if an industrial unit existed prior to the sanctuary’s notification, the declaration of the land as a sanctuary in 1998 would have extinguished all prior claims unless such claims had specifically been brought to the district collector’s notice, settled.

On May 30, Sun Pharma submitted an application to the Tamil Nadu State Environmental Impact Assessment Authority seeking permission to expand. The application was filed under a diluting amendment to the EIA Notification 2006 that the Union environment ministry had made earlier this year, citing COVID-19 as an excuse to let pharmaceutical companies set up new units or expand existing ones quickly, until September 2020. The amendment allows such companies to skip environmental impact assessment and public hearings.

Sun Pharma’s application states that it is located 0.72 km outside the sanctuary’s boundary, and 3.72 km from the boundary of the lake. This suggests the company may have been privy to the efforts by the forest department to redraw the boundaries of the sanctuary from 5 km to 3 km, thus placing Sun’s facility just outside the redefined limits.

For a sanctuary to be denotified, the proposal must be recommended by the State Board of Wildlife. The National Board of Wildlife then has to concur, after which the Government of Tamil Nadu will have to issue an order denotifying the sanctuary under the Wildlife Protection Act.

As things stand, Vedanthangal sanctuary limits extend to 5 km from the tank boundary. Sun Pharma’s existing operations and the proposed expansion fall squarely within the sanctuary.

What about the birds?

Citing commercial pressures to reduce the park’s boundary is untenable considering only 4.71% of India’s landmass is under some sort of protection. The remainder is available for development and commercial purposes.

The large-canopy trees inside Vedanthangal tank make for ideal roosting and nesting sites for birds that visit the region during the post-monsoon season, from October to February. The surrounding areas, including wetlands such as lakes, tanks and paddy fields, serve as foraging grounds. A healthy agricultural landscape is well-suited to the conservation objectives of the sanctuary.

In the present case, the motivation is to promote industrialisation, urbanisation and commercialisation in the area proposed to be denotified. This will bring down the areas under agriculture, degrade water bodies by increasing impenetrable land cover in their catchment areas and desiccate the landscape. In its application for environmental clearance, Sun Pharma has declared that it will require a top-up of 176,000 litres of water each day.

A well-managed sanctuary will be a boon not merely for wildlife but also to local communities, whose members will enjoy the benefits of greater water availability, a healthier living environment and the economic benefits of tourism.