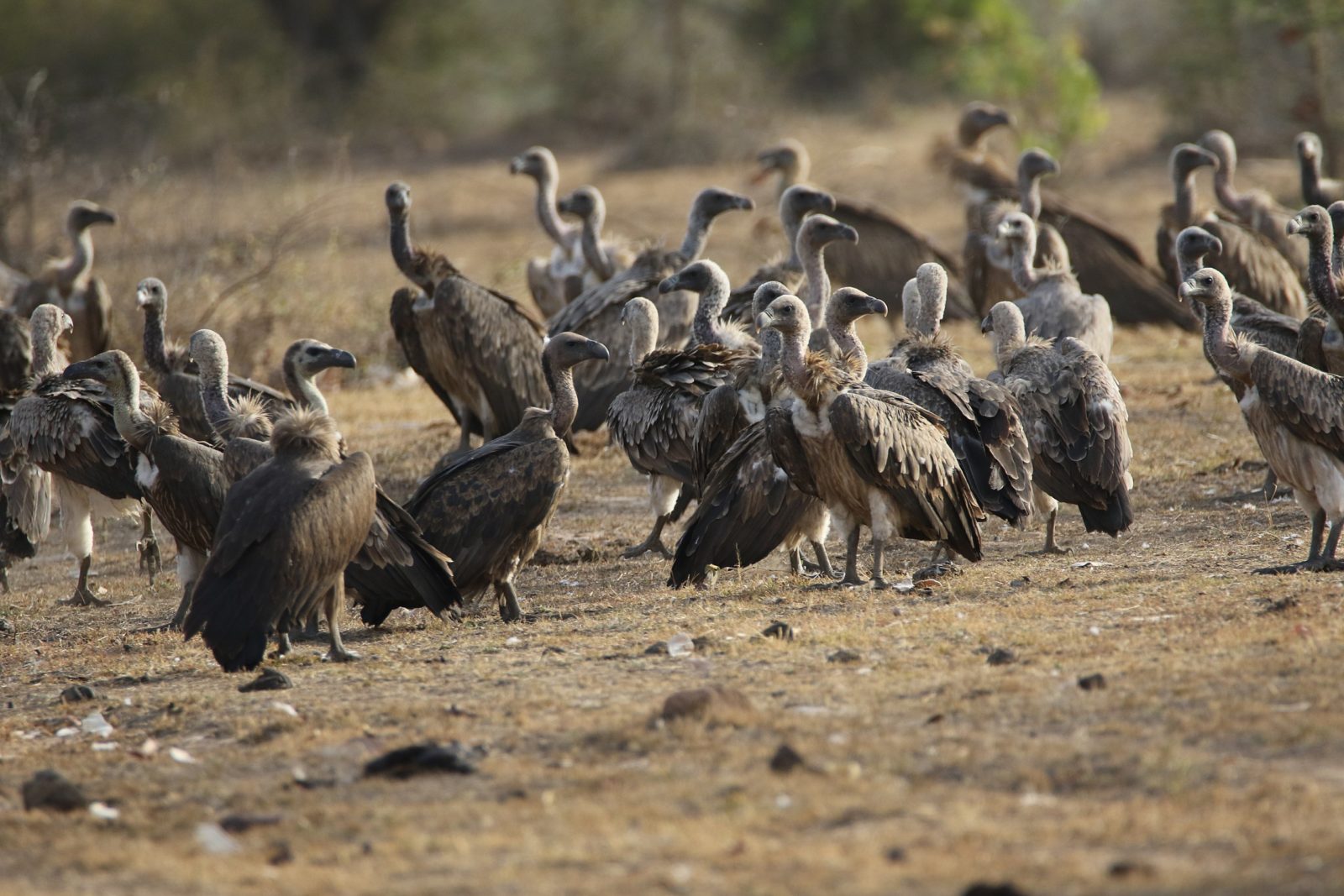 Kochi: It wasn’t love at first sight. S. Bharatidasan’s first memory of sighting a vulture was suffused with fear.

“I was barely 10 years old and I remember running away on seeing them,” he said.

That was in the late 1970s. The young Bharatidasan kept seeing vultures while growing up in Tamil Nadu’s Dindigul district – and his childish fear of the large birds soon turned to fascination.

There were several tanneries near his house and vultures would flock there to feast on the skinned carcasses of cattle dumped nearby. Bharatidasan recalled how the large, long-necked birds would sit in lines, patiently awaiting their turn. The 51-year-old now runs Arulagam, a non-profit in Coimbatore that works to conserve vultures.

The tanneries still operate in Dindigul. But he said there are no vultures anymore.

The vulture population shrunk dramatically in the area, as they did across most of India in the 1990s. The culprit was a popular veterinary drug called diclofenac. While it worked its magic on cattle as a painkiller, it caused kidney failure in vultures when they consumed dead cattle that had been treated with the drug just before they died. In 2006, India banned diclofenac in veterinary medicine, and the vulture decline soon began to slow.

But India’s vulture numbers are still low. They are not recovering yet, as they are in neighbouring Nepal, and as they should be if the drug that caused the decline had really been banned. At least on International Vulture Awareness Day, it’s worth asking where we are going wrong.

Livestock have been – and still are – a crucial part of Indian agriculture. Vultures play a critical role as scavengers in this agrarian system. By consuming dead cattle, they hasten the decomposition process, helping both farmers and the environment.

Nine species of vultures facilitate this ecosystem function in India. Five belong to the genus Gyps. Of these, three are distributed almost exclusively within India. The oriental white-rumped vulture (Gyps bengalensis) and the long-billed vulture (Gyps indicus) are found across parts of the Indian subcontinent.

The slender-billed vulture (Gyps tenuirostris) is found only in some parts of the Himalaya and the northeast within the country. The striking red-headed vulture (Sarcogyps calvus) used to roam large parts of the subcontinent but today is mostly restricted to central, north and northeast India. The Egyptian vulture (Neophron percnopterus) is distributed across most of India.

These seemingly wide-ranging distributions can be deceptive, however. The first reports of vulture decline came trickling in in the mid- to late-1990s. Experts soon realised that they had a disaster on their hands. They estimated that the population of long-billed vultures had dropped by a whopping 96.8% and that of white-rumped vultures by 99.9% – in just 15 years (1992-2007).

By 2004, after studying vulture corpses, scientists had zeroed in on the rampant use of diclofenac to be the problem. Diclofenac is a non-steroidal anti-inflammatory drug (NSAID) for cattle. Its veterinary use intensified in the 1990s and 2000s. When the birds consumed cattle carcasses containing the drug, it caused renal failure.

The Indian government swung into action and banned the use of diclofenac in veterinary medicine in 2006. Pakistan and Nepal followed in the same year, and Bangladesh four years later.

Soon, the results began to show. The rate of vulture population decline began to decelerate. A survey by researchers at the Bombay Natural History Society from 1992 to 2015 found that the populations of the three Gyps vultures were still low in six states in north India while the population decline of the white-rumped vulture was becoming less rapid. The population of the long-billed vulture continued to decline but at a “much lower rate than in the 1990s,” the survey report added.

The population trend of the slender-billed vulture has been impossible to gauge because they numbered fewer than a thousand then and barely more today.

Nonetheless, the ban lowered the presence and concentration of diclofenac in cattle carcasses between 2006 and 2009. In a separate study in September 2020, scientists also found that after the ban the availability of diclofenac to cattle-rearers declined in Nepal and Bangladesh but less so in India.

Specifically, according to the study paper, “In India, diclofenac still accounted for 10-46% of all NSAIDs offered for sale for livestock treatment in 2017, suggesting weak enforcement of existing regulations and a continued high risk to vultures.”

Conservationists say there are several reasons for the iffy situation in India.

First: India’s diclofenac ban is a paper tiger. The drug is still available in the market and is still in use across the country – partly because vets and paravets are illegally using human formulations in India. As the September 2020 study noted, diclofenac still accounted for up to 46% of all NSAIDs offered for sale for livestock treatment in 2017.

“We desperately need India to take the lead here as they did back in 2006,” Christopher Bowden, programme manager of Saving Asia’s Vultures From Extinction (SAVE), a consortium of scientists and conservationists. Bowden is also a co-author of the September 2020 study.

Proper implementation of the diclofenac ban could also benefit the red-headed and Egyptian vultures, scientists reported in 2014. Data from surveys between 1992 and 2011 revealed that the decline of both species in the 1990s had slowed after the 2006 ban.

Second: there are other NSAIDs in the market that are toxic to vultures, such as aceclofenac and ketoprofen. In 2021, scientists confirmed after testing vulture tissue samples that the use of another NSAID, nimesulide, had caused the deaths of four white-rumped vultures in Gujarat in 2019.

But despite the evidence, nimesulide et al. still haven’t been banned by the Indian government in veterinary use. In May 2022, the Delhi high court sought the response of the Union health ministry, the Central Drug Standards Control Organisation, the National Biodiversity Authority and the Indian Veterinary Research Institute, among others, to a public interest litigation that asked why new NSAIDs couldn’t be tested vis-à-vis vultures before entering the market.

Toxic NSAIDs are the biggest threat to vultures in India right now – but there are others, too. Vultures have been recorded dying after colliding with power lines, just like India’s ‘critically endangered’ national bird, the great Indian bustard.

Vultures also die when they consume the carcasses of cattle that had been poisoned and used to bait feral dogs, jackals and other predators.

But there may be hope left still – if the Indian government gets cracking right away.

The Indian Veterinary Research Institute tested two NSAIDs for veterinary use, meloxicam and tolfenamic acid, and found them to be safe for vultures. But these alternatives still haven’t captured vets’ preferences. The September 2020 study found that meloxicam accounted for only 32% of the NSAID drugs available for sale in India in 2017.

“We need more support from vets and the pharmaceutical industry to take steps forward in popularising these two safe drugs,” Bowden said.

This is why increasing awareness among stakeholders has been crucial. After banning diclofenac and promoting the use of safer alternatives, the Nepal government also engaged with local communities and veterinary practitioners. This is why Nepal’s vulture population is bouncing back, Bowden said.

India has also launched several captive breeding and release programmes. According to the SAVE website, the national vulture breeding programme now has more than 600 vultures in captivity at three centres in Haryana, West Bengal and Assam. India released its first captive-bred vultures in 2020; more birds await release.

But that just doesn’t make sense until the risks to their lives – at least the existing illegal diclofenac use – have been addressed by properly enforcing the ban, Bowden told The Wire Science.

“It remains unclear whether there is the will to implement the necessary actions, and pharmaceutical companies need a timely legislative steer to do the right thing,” he added.

Bharatidasan, of Arulagam, for his part conducts numerous awareness sessions in schools, villages and colleges in and around Sathyamangalam and Mudumalai in Coimbatore district about the threats to vultures and why we need them.

Will all this suffice to bring the vulture population back to where it was in Dindigul four decades ago? “I would be the happiest if it does,” he said. “But practically speaking, the possibility of that is low.”

Today, farmers bury dead cattle. Tanneries dispose of cattle carcasses carefully. All other parts except the skin are harvested for use in other industries, Bharatidasan said. There isn’t enough food for vultures in Dindigul, Coimbatore or even in India.

“Getting vultures back to their former glory will be a big challenge,” he said. “But the least we can do is keep at the work and ensure that their populations revive at least a little.”

Even as the vulture flies, India has a long way to go.

Note: Three instances of “red-necked vultures were corrected to “red-headed vultures” at 1:45 pm on September 3, 2022.