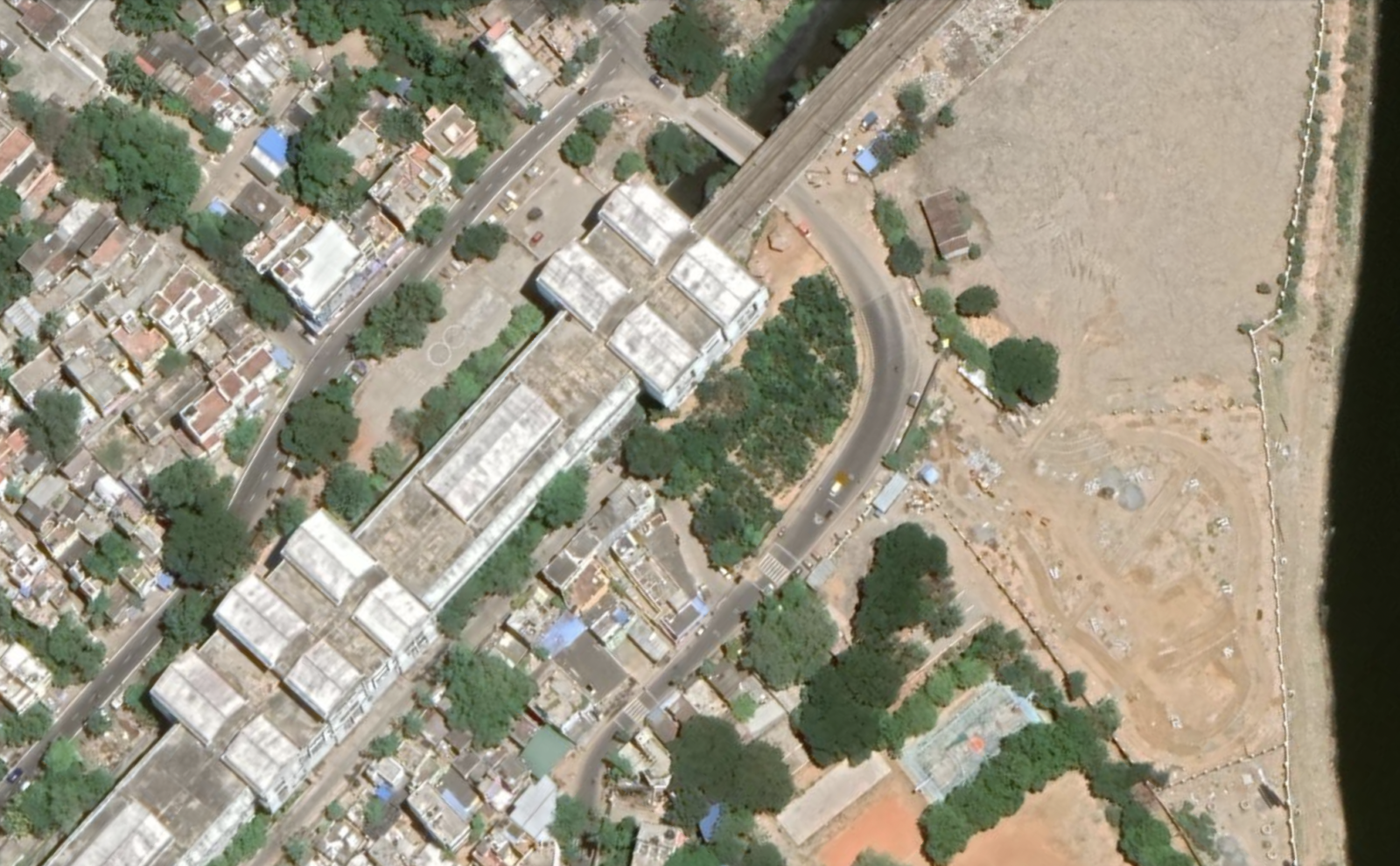 A Miyawaki forest is visible at the centre of this image, along the banks of the Adyar river (right) in Kotturpuram, Chennai. Image: Google Earth

‘Miyawaki’ has become a ubiquitous buzzword in Chennai’s urban-planning circles these days. Chennai’s first Miyawaki forest was established at a cost of Rs 20 lakh in early 2020. Today, the idea of Miyawaki forests has taken such a firm root in the city’s collective imagination that the local government has plans include an additional 1,000 Miyawaki forests, including in areas that currently host corporation parks and the banks of the Cooum river.

A Miyawaki forest is a technique of Japanese provenance in which dense forests of native species of trees and shrubs are planted. The forest thus created is intended to be multi-layered, with an inter-plant distance of around 60 cm. Many Indian cities have adopted this idea, primarily because the results are immediate. Each Miyawaki forest is known to create a tree and shrub density 30-times higher than conventionally planted forests, and are aesthetically appealing.

However, does such a dense planting technique provide adequate space for larger trees (such as teak) to fully mature and produce natural canopies? Does the close planting allow any natural regeneration within the planted forest? And what kinds of animals use these dense forests as their habitats? There have been no studies conducted to answer these questions even as Chennai and other cities adopt the technique in earnest.

Natural forests, like those in the Western Ghats, have a tree density of around 160 per acre in dry deciduous forests, increasing to about 520 per acre in dense evergreen forests. More often, the best-preserved natural forests in the Western Ghats have a density of 200-300 trees per acre. There are of course grasses, herbs, shrubs, palms and saplings in the intervening spaces.

The Miyawaki technique allows officials to plant more than 4,000 trees and shrubs per acre. The purpose of such a high density is to ensure the trees grow straight up, without providing opportunities for wide canopies and the natural maturation of many species of larger trees.

In coastal cities like Chennai, native trees are not those that have tall and straight boles but those that sprawl, like the Indian laurel (Calophyllum inophyllum), banyan (Ficus bengalensis), Indian beech (Pongamia pinnata) and portia (Thespesia populnea). It is not possible to accommodate these species in a Miyawaki forest. Crucially, Chennai’s original vegetation is that of sparse tree growth dominated by palms like the wild date, palmyra and coconut.

An oft-cited reason to hastily green a space with trees is carbon sequestration and climate mitigation. However, if trees are not allowed to grow to their full size, they do not sequester carbon efficiently. Different species of trees and shrubs have different capacities to sequester atmospheric carbon. This depends on their size, leaf shedding habits (deciduous versus evergreen), recurring behaviours, and branching and rooting patterns.

So the choice of tree species in urban afforestation is very important. In Chennai, some of the established Miyawaki forests have not paid attention to the structure and species composition of their flora. Many non-native species, such as the gul mohr (Delonix regia), have been used, and no effort has been made to create a multi-layered structure.

If the raison d’etre of the Miyawaki technique is really climate mitigation, we don’t know if there is a helpful relationship between the two. We need to investigate scientifically if Miyawaki forests serve this purpose. At the same time, in the absence of such detailed studies, officials should not be allowed to claim that the technique has any climatological advantages over traditional systems of afforestation.

A 2018 study by Care Earth Trust on the green cover of Chennai revealed that 15% of the area in Greater Chennai Corporation is under vegetation cover.1

Every rapidly urbanising city has space constraints, but this does not mean the only feasible form of afforestation needs to involve choking small spaces with a large number of trees and shrubs. A few well-grown trees can also sequester carbon, and perhaps more efficiently for not existing in a crowded, resource-constrained space.

Also read: What Environmentalists’ Fight for Delhi’s Ridge Tells Us About Neoliberalism

Naturally growing trees are also important as habitats for urban fauna. When left undisturbed for 5-10 years, they support biological communities and form near-natural local ecosystems. And for performing these ‘ecosystem services’, they can also be more profitable than a Miyawaki forest.

Restorating natural vegetation within available spaces in urban areas should be the focus of afforestation – based on a scientific understanding of the ecological history of the landscape in question. Chennai has never had dense forests except in the form of mangroves, but has instead been marked by slow-growing, long-lived palms. However, they may be unconducive to instant results, and the quest for such results may be the real problem here.

R.J. Ranjit Daniels is an ecologist and trustee, and Anjana Vencatesan is a senior research associate, both with Care Earth Trust, Chennai.