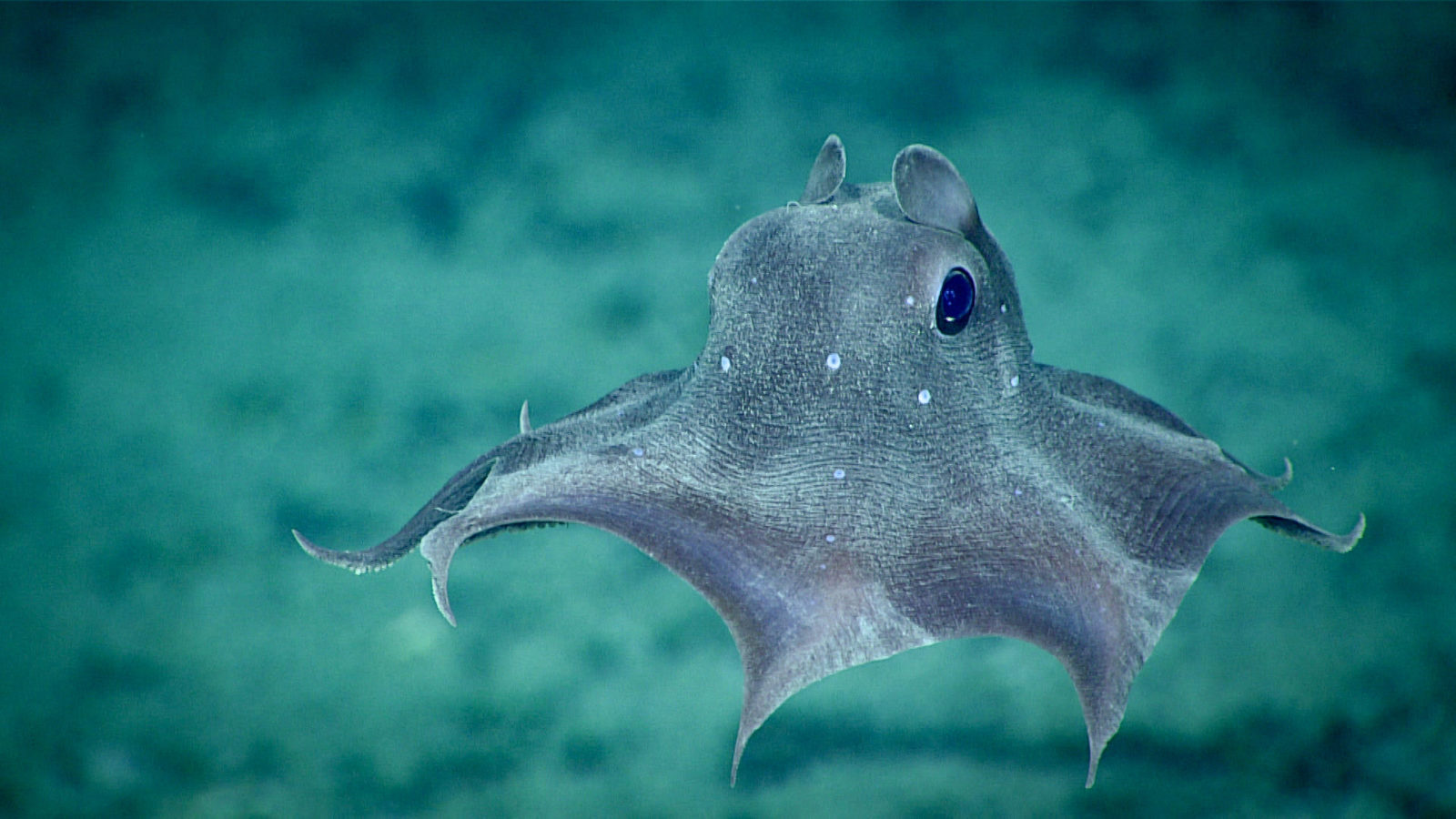 A dumbo octopus seen during a deep-sea exploration mission in the southeastern US, 2019. Photo: NOAA/Flickr, CC BY-SA 2.0

Similar to some other countries such as China, the quest for minerals in the deep sea has been on India’s radar for some time now. Recently, in June 2021, it got a significant boost as the Indian government approved a ‘Deep Ocean Mission’ to explore the ocean for resources and develop deep-sea technologies for sustainable use of ocean resources. But the move towards deep seabed mining has also reignited concerns that many environmental organisations have been pointing out over the potential harm it could cause to marine biodiversity.

The proposal of the Indian government’s Ministry of Earth Sciences was cleared by the Cabinet Committee on Economic Affairs led by Prime Minister Narendra Modi with an estimated cost of about Rs 4,077 crore for a period of five years.

It is scheduled to be implemented in a phase-wise manner and would focus on the development of technologies for deep-sea mining, and manned submersible which will be developed to carry three people to a depth of 6,000 metres in the ocean with a suite of scientific sensors and tools. At present, only a very few countries have acquired this capability.

The government said an integrated mining system will be also developed for “mining polymetallic nodules from 6,000-metre depth in the central Indian Ocean.” India will focus on exploring and identifying potential sites of “multi-metal hydrothermal sulphides mineralisation along the Indian Ocean mid-oceanic ridges.”

“The exploration studies of minerals will pave way for the commercial exploitation in the near future, as and when commercial exploitation code is evolved by the International Seabed Authority (ISA), a UN organisation. This component will help the blue economy priority area of exploring and harnessing of deep-sea minerals and energy,” said the government.

According to the government, the mission will also focus on the development of ocean climate change advisory services to support coastal tourism, off-shore energy development, exploration and conservation of deep-sea biodiversity, and an advanced marine station for ocean biology.

“Bio-prospecting of deep-sea flora and fauna including microbes and studies on sustainable utilisation of deep-sea bio-resources will be the main focus,” said the government.

The government states that about 95 percent of the deep ocean remains unexplored and thus the mission is crucial to ensuring India’s mineral and energy security. The country is covered by deep sea from three sides and has a 7,517 kilometres long coastline and 1,382 islands. About 30 percent of India’s population is living in coastal areas and thus the ocean is a “major economic factor supporting fisheries and aquaculture, tourism, livelihoods and blue trade.”

“Oceans are also a storehouse of food, energy, minerals, medicines, modulator of weather and climate and underpin life on Earth,” said the government. The United Nations has already declared 2021-2030 as the decade of ocean science for sustainable development.

In March 2021, India’s Minister for Earth Sciences Harsh Vardhan had told the parliament that India has been granted “exclusive rights of exploration under the contracts signed with International Seabed Authority in 2002 and 2016 for exploration of polymetallic nodules in Central Indian Ocean Basin and polymetallic sulfides in the southwest Indian Ocean respectively.”

India has been among the pioneer countries to work on deep-sea exploration of minerals. It started at least 40 years ago, in January 1981, when the Indian Research Vessel Gaveshani recovered the first polymetallic nodule samples from the Indian ocean.

It was followed by the formulation of a national polymetallic nodules (PMN) program that led to India getting the pioneer investor status with exploration rights over an area of 150,000 square kilometres in the Central Indian Ocean Basin (CIOB) under the UN Convention on Law of the Sea (UNCLOS). Subsequently, through periodic relinquishments, an area of 75,000 kilometres square has been retained by India as per the contract with the ISA.

The polymetallic nodules contain valuable minerals such as manganese, iron, nickel, copper, cobalt and others. But mining for those won’t be easy because at present, according to the government, the technologies required for deep-sea mining have strategic implications and are not commercially available.

According to the International Union for Conservation of Nature (IUCN), deep-sea mining is the process of retrieving mineral deposits from the deep sea, which is at a depth of 200 metres below the ocean and covers about 65 percent of the earth’s surface.

The IUCN states that the interest in the mineral deposits of the deep sea is growing and is mainly because of “depleting terrestrial deposits for metals such as copper, nickel, aluminium, manganese, zinc, lithium and cobalt, coupled with rising demand for these metals to produce high-tech applications such as smartphones and green technologies such as wind turbines, solar panels and electric storage batteries.”

Madhavan Rajeevan, who is the secretary of the union ministry of earth sciences, emphasised that the protection of marine biodiversity as well as ensuring the mineral security of India are two main pillars of India’s deep-sea mission.

“We are aware of apprehensions and fears about destruction of the marine biodiversity due to deep-sea exploration including mining activities. We want to ensure that there is a balance between the two,” Rajeevan told Mongabay-India.

In fact, India realised the need for evaluation of environmental data for prediction of the potential impact of mining on the marine ecosystem and, in 1996, started the project on environmental impact assessment for nodule mining in the Central Indian Ocean Basin.

Rajeevan said that the Indian government’s National Institute of Oceanography (NIO) in Goa is already conducting work to understand the impact of deep-sea exploration including mining on marine biodiversity.

“At present, deep seabed mining is governed by the ISA which has not allowed commercial mining so far – only the exploration is allowed at the moment. The international authority knows about environmental concerns and is exploring ways to establish the criteria for allowing commercial mining. They are asking all stakeholders to conduct proper studies to assess the environmental impact. We have a balanced view on the issue. Even if commercial mining is allowed, it is still a few years away,” he said.

In fact, in 2020, the Indian government proposed to conduct technical trials in 2021, for “demonstration of its polymetallic nodule collector pre-prototype deep-sea mining machine” in the CIOB.

According to the ministry, the objective of the trial is to test the capability of the machine in terms of locomotion, crushing, pumping and discharge within a limited area on the seabed. The ministry also wants to collect “environmental data before and after the trials as well as over a period of time to assess the extent of impact on physicochemical and biological conditions.”

However, the trial is yet to take place. According to Rajeevan, “the manned submersible is in early-stage … but deep-sea mining system is in advanced stage” and is already being tested.

The deep ocean mission announced by the government gives a new boost to the development of India’s deep-sea mining system, which has been going on since 2012.

As countries across the world including India gear up to mine the deep seabed for minerals, there is a growing number of organisations across the world that are seeking a moratorium or pause to such plans until marine biodiversity concerns are assessed and addressed.

The IUCN stresses that the concern is that the scraping of the seafloor and pollution from mining processes can wipe out entire species – many of which are yet to be discovered. It says the environmental impact assessments, effective regulation and mitigation strategies are needed to limit the impacts of deep-sea mining.

On June 29, Jessica Battle, who is the leader of the World Wildlife Fund’s No Deep Seabed Mining Initiative, in a statement, said that “WWF urges ISA member states to show ocean leadership by putting in place a moratorium on deep seabed mining now.”

“It is imperative to pause the unnecessary rush to the deep and allow science and innovation to help us switch to a truly sustainable economy. Governments will be supported by an increasing number of scientists, NGOs, civil society organizations, companies and communities to make that decision. Forcing the regulations through prematurely and without due process or enough scientific knowledge about the deep-sea is not in line with the precautionary approach and other principles of international environmental law,” she said.

WWF’s statement came in response to the small island state Nauru invoking a rule that fast tracks deep seabed mining via a request to the International Seabed Authority.

WWF’s report in February 2021, ‘In Too Deep‘, states that deep seabed mining is expected to have destructive effects on vulnerable deep-sea ecosystems, lead to loss of biodiversity and species extinction. It also talks about the impact of seabed destruction on global fisheries and says it could threaten carbon and nutrient cycles in the ocean. It warns that negative effects on global fisheries would threaten the main protein source of around one billion people and the livelihoods of around 200 million people, many in poor coastal communities.

“We are also in the midst of a global pandemic, making it difficult for states to meet to properly discuss. At a time when states need to collaborate perhaps more than ever, this move is a blow to the multilateralism we need to solve the combined climate and biodiversity crises,” Battle cautioned.

She alleged that the deep seabed mining lobby is “selling a story – without evidence – that seabed mining is less harmful than land mining, and that companies need deep seabed minerals in order to produce electric cars, batteries and other items that reduce carbon emissions.”

Mary Abraham, a development economist and policy scientist, told Mongabay-India that she fears that the “impact of deep-sea mining could be unprecedented and spell huge trouble for marine ecology.”

Abraham, who has carried out extensive research on mining issues across Indian states including those in the coastal region, said that their studies had shown how mining exploited resources in states such as Goa and led to large-scale degradation of the environment.

“Mining in the coastal states has been a major threat to the pristine coastal ecosystems. In several cases, the political and social pressure led to mining projects being abandoned or denied permission as the companies failed to get a social license – basically failed to find ongoing approvals and acceptance of the local communities. But in oceans, they won’t need any social license and there won’t be any stringent checks and balances,” said Abraham, who works with TERI.

“The plans for deep-sea mining – whether of India or any other country – are a cause of serious worry. The ecosystem of the oceans is very sensitive – they run the planet. I shudder at the thought of the destruction this thirst for minerals could bring. Why can’t we focus on recycling, reusing and efficiently using whatever resources we have over the surface,” she said.

A recent statement, signed by 351 marine science and policy experts from 44 countries, has also called for a pause to deep seabed mining. They said deep-sea mining would result in the loss of biodiversity and ecosystem functioning that would be irreversible on multi-generational timescales.