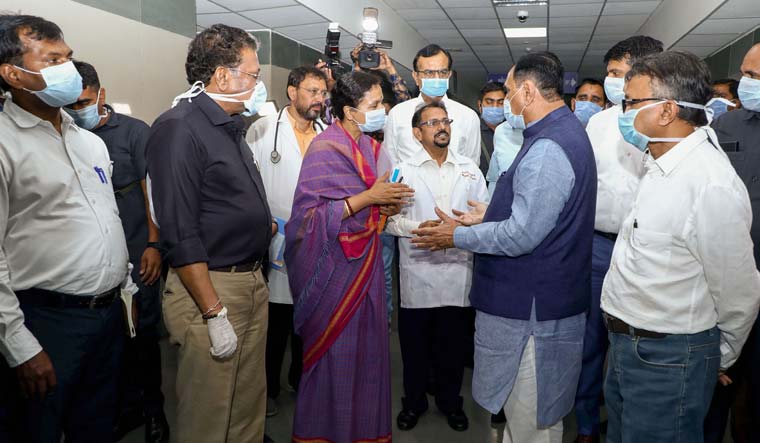 Gujarat CM Vijay Rupani during a visit to a COVID-19 hospital. Photo: PTI.

New Delhi: While the Gujarat health department has stated that the COVID-19 death toll in Ahmedabad city on November 27 was only 19, news reports a day later – quoting family members of patients who have died after testing positive – have highlighted the curious cases of long queues at crematoria across the city.

A Times of India report quoted a resident of Ellisbridge area of Ahmedabad who said that they were 36th in line in a crematorium behind the city’s V.S. Hospital. On being informed by the hospital early on November 27 that his elder sister had passed away after testing positive for COVID-19 infection, he reached the hospital immediately.

“The procedure took four hours and we got the body only at 11:30 am. We first went to the crematorium at Vadaj but we were told that it would take about three to four hours due to the long queue of bodies to be cremated,” he told the newspaper.

The report said he and his brother then approached the crematorium behind the V.S. Hospital where there was a ‘comparatively shorter queue.’

“We were told that from the morning, they had cremated 35 bodies – of both COVID-19 patients and non-patients and we were the 36th in line,” the man said.

Ahmedabad city has at least 40 crematoria. The news report also stated that the crematoria across the city have increased their daily hours to be able to cremate more bodies. While the official count is stated to have been only 19 till November 27, the report stated, “A relative said that it was difficult to quantify ‘COVID-19 deaths’ as the death certificates of several patients doesn’t mention the viral infection.”

“My uncle was diabetic and he died during COVID-19 treatment. The ’cause of death’ column remained empty,” the newspaper report quoted a youth from Saraspur area as having said.

Undercounting of COVID-19 deaths in some states has been reported in media for some time, with The Wire Science uncovering evidence of this happening en masse – including in Vadodara and Surat in Gujarat.

On November 26, state Chief Minister Vijay Rupani had told reporters that his government has no plan to order a statewide lockdown due to the rising cases. The state attorney general also stated this to the high court on November 28.

Like in some states, night curfew has already been clamped on Ahmedabad, Vadodara, Surat and Rajkot.