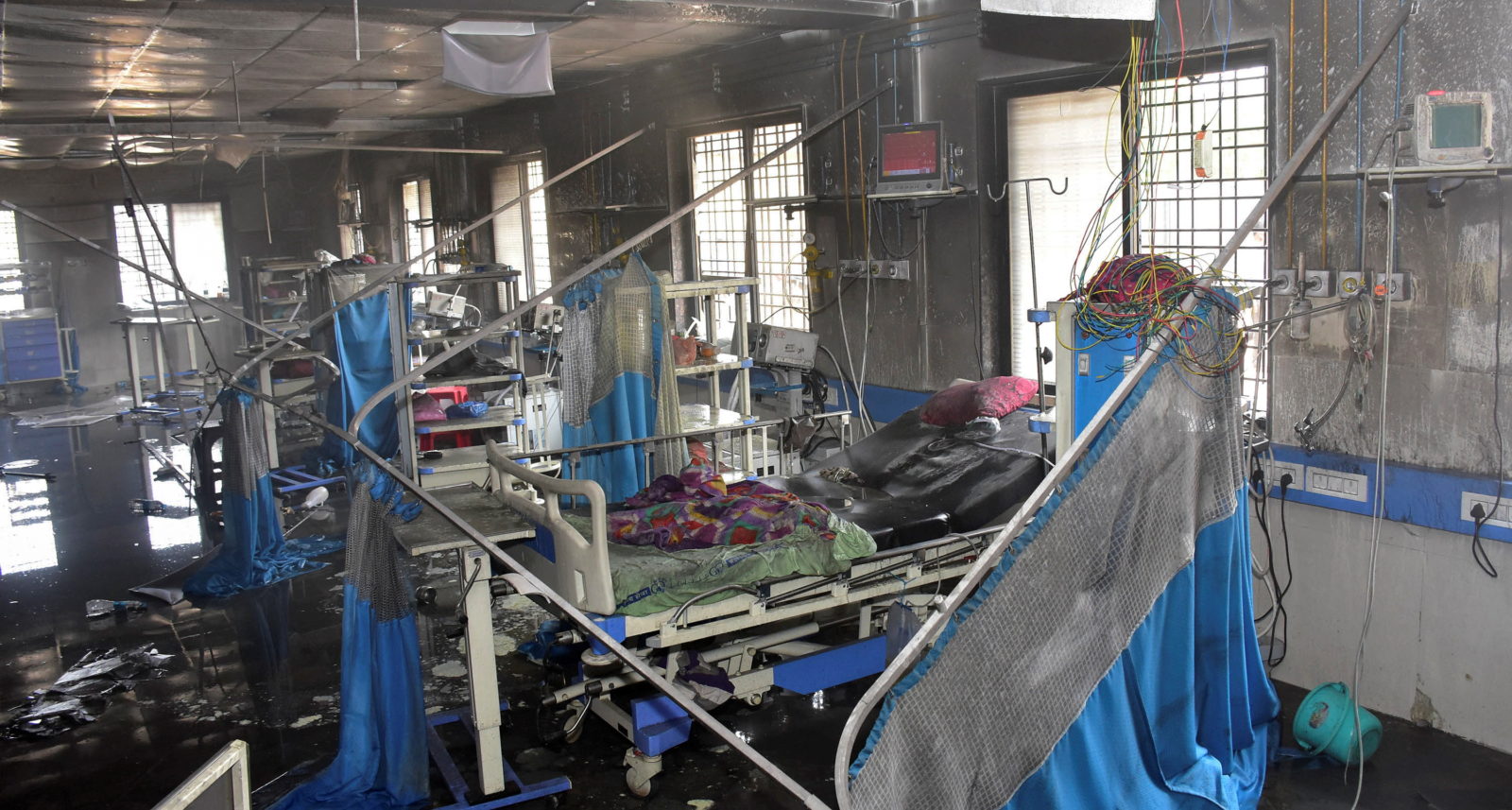 View of the COVID-19 ward that caught fire in an Ahmednagar hospital, Maharashtra, November 6, 2021. Photo: Reuters/Stringer

Pune: As many as 11 COVID-19 patients were killed after a major fire broke out in the Intensive Care Unit (ICU) of the district civil hospital in Maharashtra’s Ahmednagar city on Saturday, officials said.

The tragedy on Diwali day was the latest in a series of such incidents in hospitals treating COVID-19 patients. The blaze erupted around 11 am in the ICU ward where 17 COVID-19 patients, many of them senior citizens and some on ventilator or oxygen, were undergoing treatment. The ward had been added to the hospital after the pandemic began, officials said.

Ahmednagar city is located 120 km from Pune and 253 km from Mumbai.

Late in the evening, a case was registered against unidentified persons under IPC section 304 (A) (causing death by negligence), said Ahmednagar district superintendent of police Manoj Patil.

The fire was doused around 1:30 pm, said chief fire officer of the city civic body Shankar Misal, adding that a short circuit was suspected to be the cause though it was yet to be confirmed.

According to the patients’ relatives who normally waited in the corridor outside the ICU, they had been asked to step out as cleaning was going on. Many of them rushed back when they saw thick black smoke billowing from the ward and tried to rescue the patients.

After the incidents of fire at hospitals treating COVID-19 patients elsewhere, fire audits had been ordered across the state.

As per district collector Rajendra Bhosale, such an audit had been carried out at this hospital too. But according to Misal, after the audit, the work of installing necessary safety systems was incomplete due to “want of funds”.

As injured patients were rushed to a nearby hospital, 10 of them were declared brought dead, police said. One patient succumbed later.

As many as 15 patients were on ventilator or oxygen in the ICU. “Saving them was the priority. But due to their critical condition, to remove the oxygen support and bring them out was a tough decision,” said one fire brigade official.

“After quick discussion, we decided to bring them out anyhow and later put them back on oxygen or other support systems,” he added.

Most of those who died were aged between 65 to 83, according to hospital officials.

A probe committee headed by Misal will look into what led to the tragedy, the collector said.

According to Misal, after the recent fire audit, the hospital had been told about the measures needed to be taken. It was asked to put in place an effective fire-fighting system including a pipeline and a sprinkler system.

But the work was incomplete due to “want of funds” thought “they had fire extinguishers at the hospital,” he said.

Maharashtra Chief Minister Uddhav Thackeray expressed grief over the tragedy. He spoke to district guardian minister Hassan Mushrif and chief secretary Sitaram Kunte and asked them to ensure that other patients admitted at the hospital get proper treatment without any disturbance, a statement from the CMO said.

“The CM said an in-depth probe will be conducted by the district collector,” it added.

In a tweet, Modi said, “Anguished by the loss of lives due to a fire in a hospital in Ahmednagar, Maharashtra. Condolences to the bereaved families. May the injured recover at the earliest.”

Congress leader Rahul Gandhi said, “My condolences to the kin of those who lost their lives. I appeal to congress workers to assist in the relief work.”

BJP leader and former Maharashtra chief minister Devendra Fadnavis described the incident as “very shocking and disturbing”. Condoling the deaths, he sought “in-depth inquiry” and strict action against those responsible.

Maharashtra Energy Minister Nitin Raut ordered a detailed inquiry into the fire. The electricity department’s inspection team has reached the hospital and will conduct a probe, he said.

Maharashtra revenue minister Balasaheb Thorat visited the hospital. A compensation of Rs two lakh will be given to the kin of the deceased over and above the Rs 5 lakh ex-gratia, he told reporters. Union minister of state for health Bharati Pawar also visited the hospital during the day.

In April this year, 15 COVID-19 patients had died in a blaze at the ICU of a private hospital in Palghar district of Maharashtra.

Another fire in March at Dreams Mall in Mumbai’s Bhandup, which housed a COVID-designated hospital, had claimed the lives of nine patients.