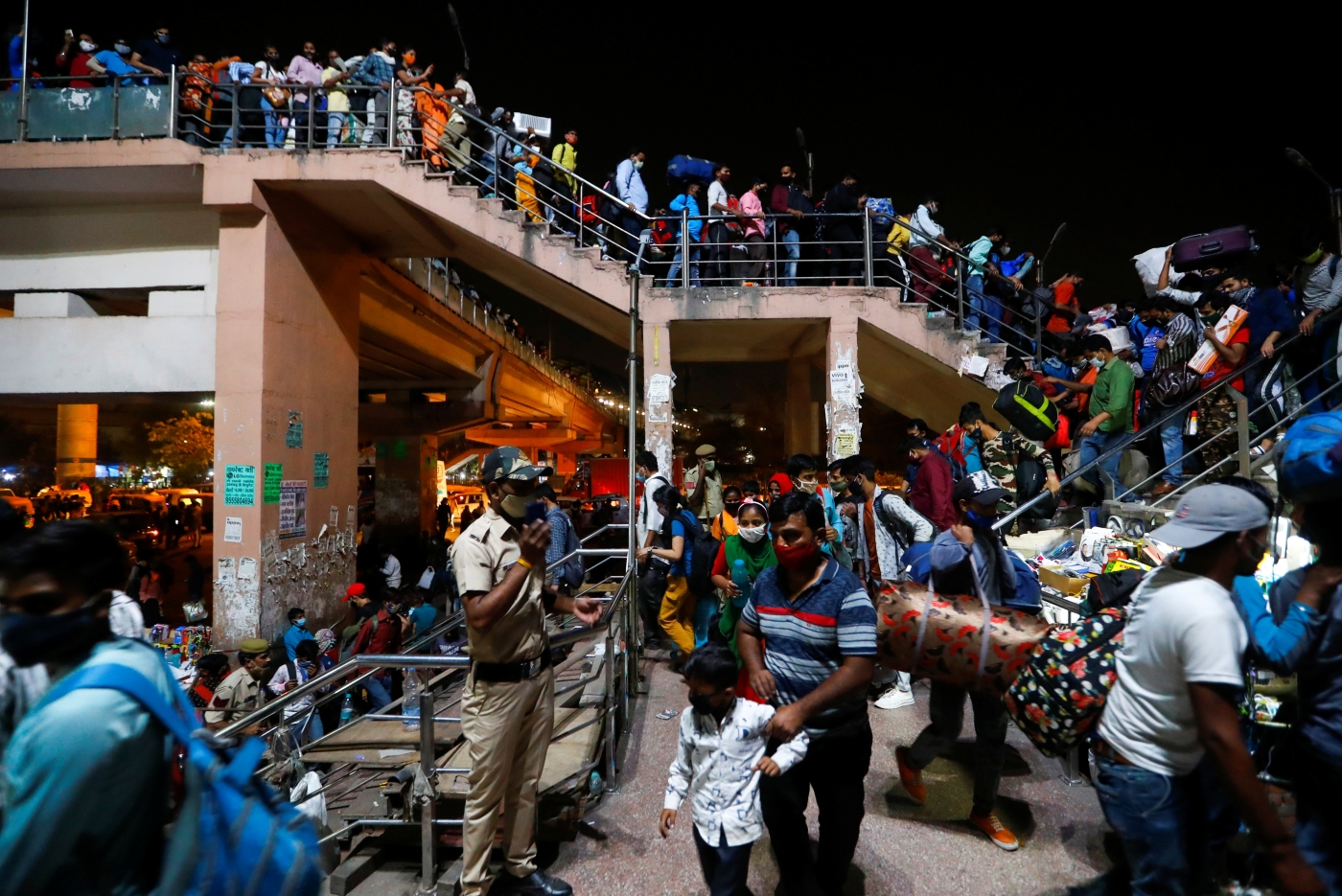 We Need To Identify and Eliminate Vaccine Hesitancy Among Healthcare Workers

Migrant workers arrive at a bus station to board buses to their villages after Delhi ordered a six-day lockdown, in Ghaziabad, April 19, 2021. Photo: Reuters/Adnan Abidi

* The B.1.617 novel coronavirus variant, known for its ‘double mutation’, was detected in October 2020 itself but health officials didn’t follow up on its spread because the number of cases was coming down at the time, plus the genome surveillance programme was held back by lack of clear direction. Now, researchers have reported that this mutant contains a third significant mutation. (Indian Express)

* Prime Minister Narendra Modi has announced that all adults in India can avail of the Covaxin or Covishield vaccines from May 1. (The Wire Science) The announcement has been met with a mix of jubilation and confusion. The latter is because the country is already experiencing a conspicuous vaccine shortage and it’s unclear where from or when the additional doses will become available. In addition, Modi has asked state governments to purchases doses directly from manufacturers at “self-set prices”, leaving states vulnerable to “serious cash burdens.” (R. Ramakumar, Twitter)

* Even as India is in the throes of a vaccine shortage, the US has not responded to a request from Serum Institute, principal maker of the AstraZeneca COVID-19 shot, to lift a ban on the export of raw materials required to ramp up production beyond 100 million doses a month. (The Hindu) Meanwhile, the Narendra Modi government in India has given Bharat Biotech, maker of the Covaxin shot, Rs 1,500 crore to help increase production to 100 million doses a month by September 2021, and Serum Institute Rs 3,000 crore. (India Today)

* The Brihanmumbai Municipal Corporation has released data showing that 90% of COVID-19 cases in the stricken city of Mumbai are from high-rise buildings. This data is in line with previous reports and studies that infection clusters are important drivers of the epidemic. (The Wire Science) The BMC has now issued new standard operating procedures aimed at containing outbreaks within big buildings. (Indian Express)

* After Union home minister Amit Shah told journalists that it’s wrong to blame election rallies for COVID-19 spikes in the poll-bound states, especially west Bengal, the Bharatiya Janata Party has decided it will no longer hold rallies and meetings with more than 500 people. This is the second recent instance of delayed action from India’s ruling party. The first time, it called off the Kumbh Mela but not before thousands were infected and lakhs potentially exposed to the virus. (The Wire Science)

* The US government has warned travellers against visiting India given the latter’s catastrophic second wave of COVID-19 transmission – even if travellers are fully vaccinate. (NDTV) The UK and New Zealand have also banned non-residents from India travelling to these countries. (India Today)