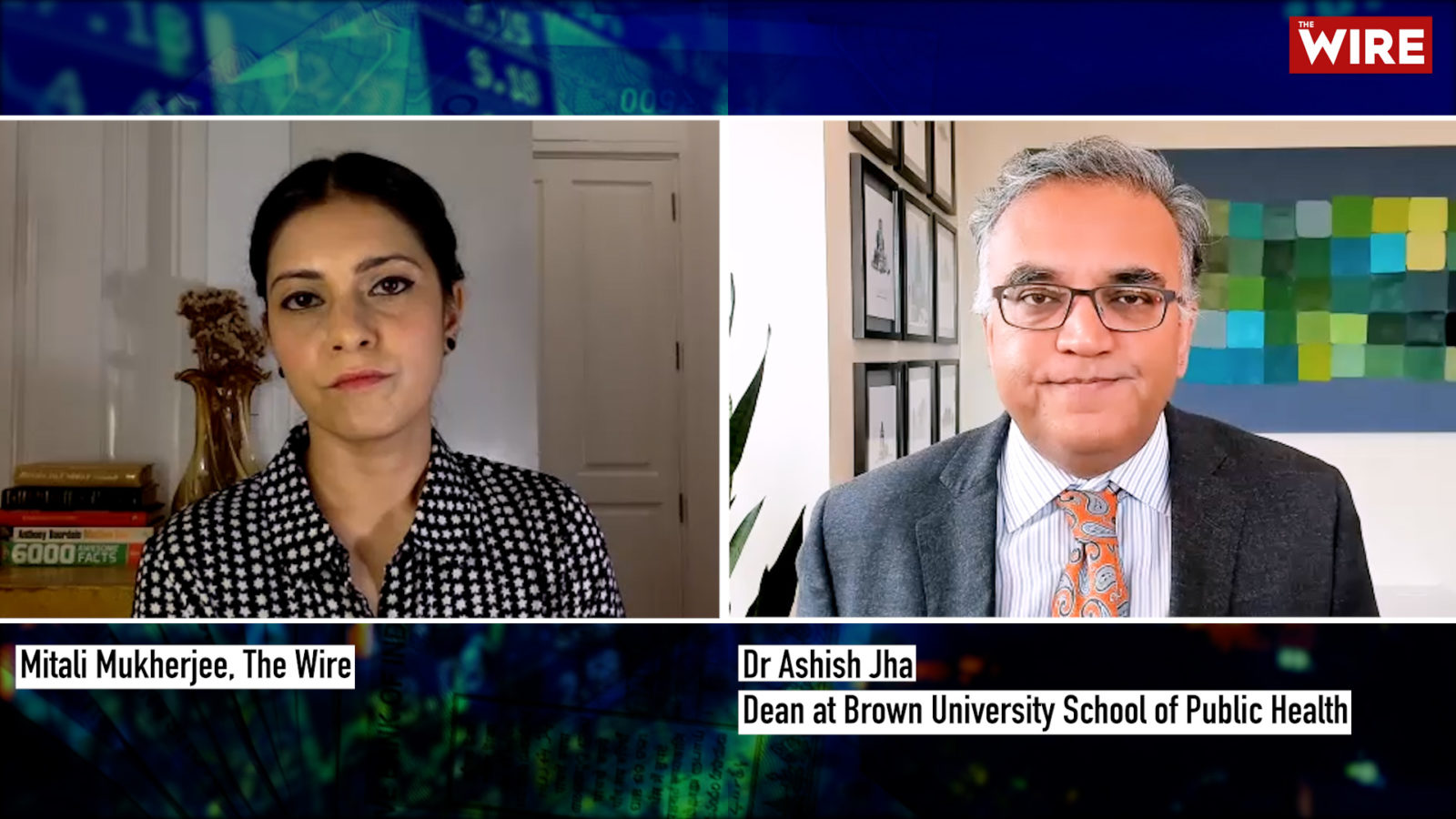 What Happens If COVID-19 Gets Loose in the Wild?

The Wire’s Mitali Mukherjee in conversation with Brown University School of Public Health’s Dr Ashish Jha on concerns with the government’s decision to greenlight a vaccine without prescribed data.

The Dean at the Brown University School of Public Health said he believed it was a mistake to authorise Bharat Biotech’s Covaxin without proper phase 3 data being made available. He also said he would not vaccinate himself with Covaxin.

Dr Ashish Jha said he believed AstraZeneca’s Covishield was not perfect but still had pretty robust data to present. However, there still is concern about (lower) advocated efficacy of Covishield with the current advocated spacing between the doses in India (a four week gap mandated by the government may lead to lower efficacy).

Dr Jha said it was puzzling to those proud of India’s scientific enterprise that a decision had been made to greenlight a vaccine that did not have prescribed data available. The move was akin to something China and Russia had done, and it was not a league, he believed, India should want to see itself in.

The most important thing to keep in mind through the process of vaccination and trials is to respect the choice and autonomy of people, he said, adding that India has strong safeguards for clinical trials and must ensure they are upheld. However, he iterated that the decision would likely not cause long-term damage to stature and could be reversed if greater data transparency was now followed.

On fears around virus variants, such as in the UK and South Africa, Dr Jha warned that it was a race against time for countries like the UK to get their citizens vaccinated. He said at this point, data suggests the current vaccines by Pfizer and Moderna should be effective against the UK variant, while it was still unclear whether the vaccines were working effectively against the South Africa variant.

The Dean at Brown University School of Public Health also believed that US President Biden’s decision join the Covax initiative, rescinding the one-year notice to the WHO to leave the union of nations, was an important step. The move by Biden administration is not just significant for the US to be part of this initiative but to step up and play a greater role in providing vaccines support to lesser developed nations and counter growing vaccine apartheid and vaccine nationalism.

He also stressed that it was essential to have universal vaccination in order to build any durable immunity or safeguard from the virus.

The Wire Science@TheWireScience
3 Following 14.8K Followers
Prime Minister Narendra Modi took the first dose Covaxin shot on March 1, and encouraged others to take the vaccine… https://t.co/jGfmryLlMK
6 hours ago
1
In India, the use of COVID-19 vaccinations for political gain first became evident during the Bihar polls, when the… https://t.co/RORQtfR2qt
7 hours ago
8 6
People older than 60 years and people older than 45 years with one or some of 20 comorbidities identified by the Un… https://t.co/IzZzGbAu2b
9 hours ago
1
PM Modi on Monday took his first dose of the COVID-19 vaccine at AIIMS here and appealed to all those who are eligi… https://t.co/w19qHecG19
9 hours ago
To pick up changes as they emerge in the viral population, and to stop them from spreading elsewhere, the governmen… https://t.co/7YJ6FTQASt
10 hours ago
1
Most patients presenting with symptoms related to COVID-19 are receiving antibiotics for additional infections, suc… https://t.co/ks7BczP4Fd
11 hours ago
1 1
Vaccine supply chains are extremely specialised and sensitive, relying on expensive machinery, highly trained staff… https://t.co/IbNERKHsMZ
12 hours ago
2 1
India’s COVID-19 tally climbed to 1,10,96,731 on Sunday with 16,752 new infections, the highest in the last 30 days… https://t.co/gEK95YK89n
13 hours ago
1 2
At the end of a nearly -26hour countdown, the Polar Satellite Launch Vehicle PSLV-C51 lifted off from the first lau… https://t.co/Xzrle33153
1 day ago
"While IGIB can sequence up to 10,000 samples a month, it has only received over a third of this number from Punjab… https://t.co/byq2du7R9w
1 day ago
2 3
. @POTUS has ordered enough vaccines to immunise every American against COVID-19, with his administration saying it… https://t.co/DwWJbtOH5v
1 day ago
1 4
The National Science Day, celebrated on February 28 since 1987, was the brainchild of Narender Kumar Sehgal, the fo… https://t.co/PDR7kG80OD
1 day ago
2 11
India’s rocket PSLV C-51 carrying Amazonia-1 of Brazil and 18 other satellites blasted off from the Sriharikota spa… https://t.co/NfgbepaZOF
1 day ago
A 2020 finance ministry order stopped govt labs from importing goods worth less than Rs 200 crore. The order was me… https://t.co/9vdxTrxzSP
1 day ago
2 4
India’s COVID-19 tally climbed to 1,10,96,731 on Sunday with 16,752 new infections, the highest in the last 30 days… https://t.co/s54jecbMVH
1 day ago
2 3
Contact us