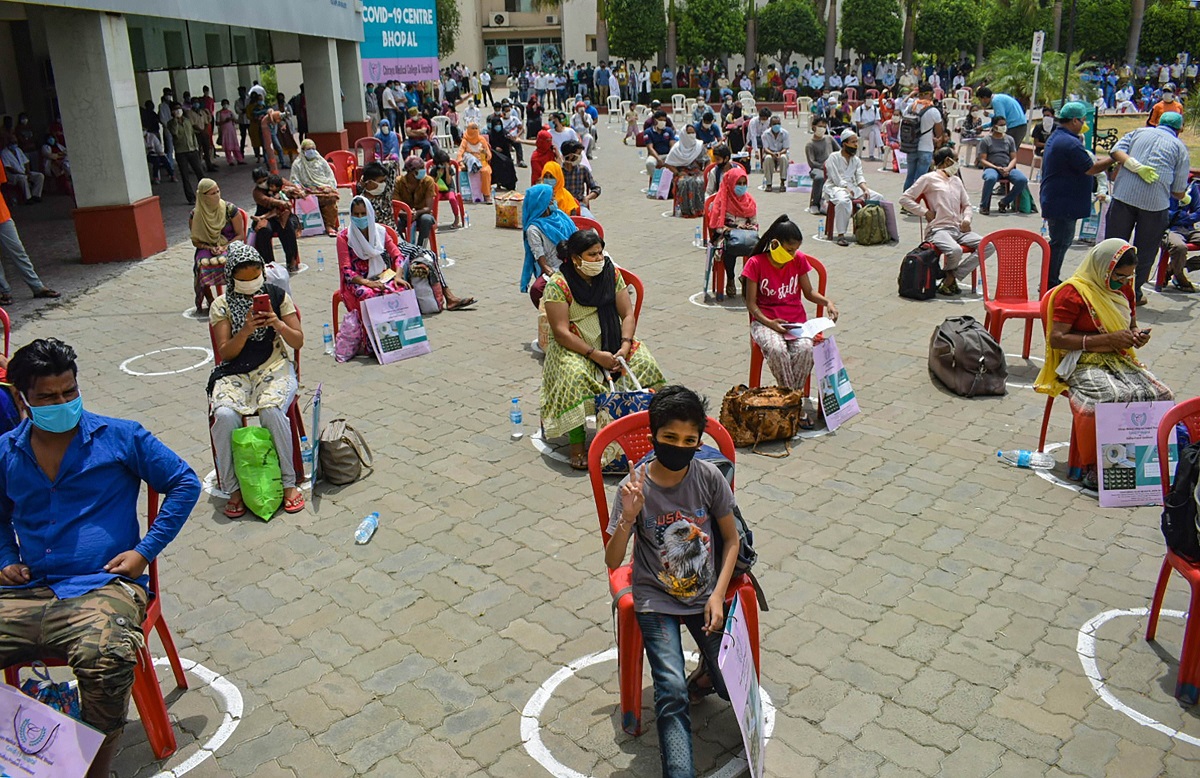 People who recovered from COVID-19 wait to be discharged from Chirayu Hospital, Bhopal, on June 1, 2020. Photo: PTI.

Priyanka Pulla’s report entitled ‘India Is Undercounting Its COVID-19 Deaths. This Is How.’, published on August 4, refers to the following article, which describes the cases of four suspected COVID-19 patients whose deaths weren’t recorded by Bhopal city in its official death toll.

Three of the stories indicate how doctors strongly suspected a COVID-19 infection – but didn’t record it because state reporting systems didn’t have the corresponding provisions.

Editor’s note: Except Mohammed Naseem, the names of all patients described below have been changed to protect their identities.

Manish, 27, was admitted to the People’s Hospital in Bhopal on July 7, when he suffered a ruptured liver abscess. After doctors operated on him, he developed respiratory symptoms indicative of COVID-19. Manish’s family then moved him to Chirayu Hospital, a designated COVID-19 hospital in the city.

Here, Ajay Goenka, the hospital’s director, ordered a CT scan that showed Manish had fluid in both lungs, a sign of possible COVID-19. As his condition worsened, Goenka said, the doctors inserted a tube through his windpipe to help him breathe and a nasogastric tube for him to receive food and medicine. However, these devices made it harder for health workers to collect a proper swab from the patient’s nasopharynx for an RT-PCR test.

Manish eventually died a week later, on July 14. “We definitely thought he had COVID-19 because there was indirect evidence from the CT-scan,” Goenka said. “But in India, we are not declaring any deaths as confirmed COVID-19, until they are proven by RT-PCR.” Thus, the death wasn’t reported as a COVID-19 death.

The second patient, 45-year-old Mohammed Naseem, was admitted to Bhopal’s Apex Hospital in July for gastric complaints, including vomiting. He had been diabetic for many years until then. His brother, Mohammed Nafees, said Naseem  suffered a heart attack at the hospital. For reasons that aren’t clear, the doctors suspected he had COVID-19. Nafees said the hospital didn’t give his family any documents.

Eventually, the family shifted Naseem to Chirayu. Here, Nafees said, doctors told him that a CT scan showed signs of COVID-19 in Naseem’s lungs – but on the other hand the RT-PCR test had come back negative.

Naseem died on July 21. The hospital labelled the death a suspected COVID-19 death, and the body was buried accordingly. The Wire Science reached out to Chirayu’s director Ajay Goenka to discuss more details of the case but received no response.

Salim, 43, was admitted to Bhopal Memorial Hospital & Research Centre, which is dedicated to victims of the 1984 tragedy, on July 23. At the time he had typical COVID-19 symptoms, including breathlessness and low blood oxygen, and a CT showed pneumonia in both lungs, Mukesh Jatav, a doctor in the hospital’s pulmonary medicine department, told The Wire Science.

Salim passed away within hours of being admitted. Jatav said the hospital was collecting a swab from Salim for an RT-PCR test at the time of his death. Since no result was immediately available, Jatav entered “?? COVID-19” as the underlying cause of death on the medical certificate of cause of death, a document that describes the chain of events leading up to death. Jatav said he meant for the question marks to mean that the death was due to suspected COVID-19.

The RT-PCR later came back negative – so Salim’s death wasn’t reported as a confirmed death to the city. Jatav admitted that a negative result could mean the patient really had COVID-19 and that testing a second sample could improve the rate of detection. “But usually, there is no time to take a second sample from a patient. And there is no rule for saving a sample to test later,” he said.

Bashir, 55, was admitted to Bhopal Memorial Hospital & Research Centre with complaints of fever and breathlessness. He also suffered from diabetes and hypertension. When he died on July 19, his name didn’t enter the list of COVID-19 deaths maintained by the city until eight days later.

Lalit Kumar, a doctor at the pulmonary medicine department at Bhopal Memorial, told The Wire Science that when Bashir died, his swab sample had been sent for an RT-PCR test, but the result wasn’t yet available. However, soon after, it came back positive, and the hospital informed the CMHO’s office.

Given these details, it remains unclear why the list of fatalities at the CMHO’s office wasn’t updated even eight days later, although the hospital claims it communicated the positive results to the CMHO’s office online almost immediately.

This suggests that the Bhopal city administration may not be updating death numbers even in confirmed cases, if the RT-PCR results arrive with a delay after the death. Prabhakar Tiwari, the CMHO, didn’t respond to questions from The Wire Science on the matter.