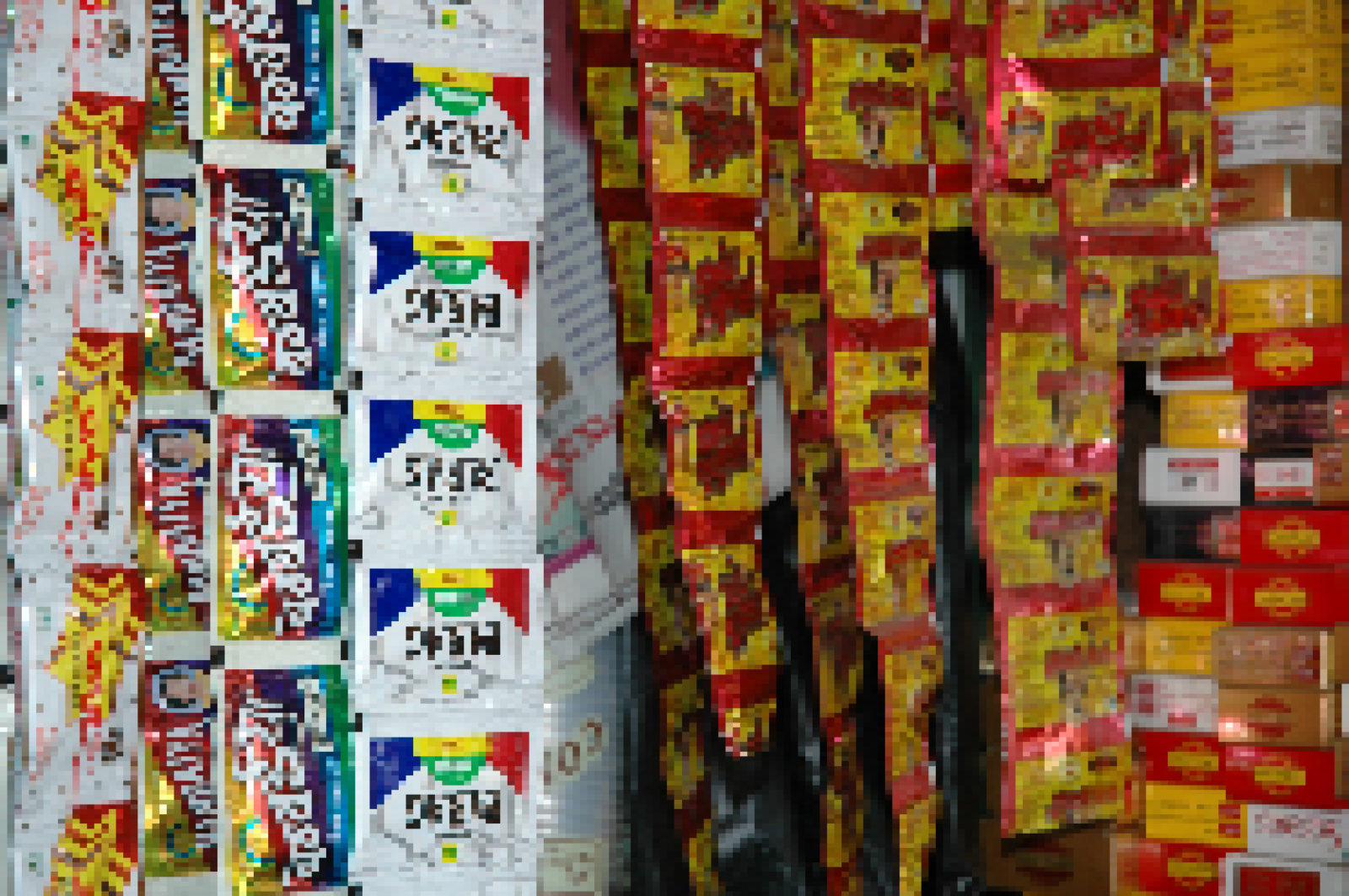 Chewing tobacco packets hanging in a small store in Karnataka, April 2007. The image has been distorted to obfuscate the brand names. Photo: possiblymaybeprobablynot/Flickr, CC BY 2.0

New Delhi: The effects of COVID-19 are more pronounced in people who have certain non-communicable diseases (NCDs). In India, tobacco consumption has been a principal cause of NCDs.

In fact, the country has the dubious distinction of being the second largest consumer of tobacco products in the world. And in 2008 alone, NCDs were responsible for the deaths of 5.2 million Indians. That’s 10x more than India’s official COVID-19 toll and at least 1.2x the estimated toll, in two years.

But if developments in the last three years are any indication, the people in charge of India’s public health care are allowing the tobacco menace to expand, instead of reining it in.

All states in India banned ‘gutka’ from 2012. ‘Gutka’ is a combination of pan masala and other products that contain tobacco, like zarda. According to the Food Safety Standards (FSS) Regulation, pan masala is to be treated as a “food product” – which means its use must be regulated by the Food Safety and Standards Authority of India (FSSAI).

(Zarda contains nicotine, a well-known carcinogen. After the 2012 ‘gutka’ ban, the tobacco industry started selling pan masala and zarda in separate pouches, instead of in one sachet as earlier. This helped the industry circumvent the ban.)

“Pan masala means the food generally taken as such or in conjunction with Pan, it may contain … betelnut, lime, coconut, catechu, saffron, cardamom, dry fruits, mulethi, sabnermusa, other aromatic herbs and spices, sugar, glycerine, glucose, permitted natural colours, menthol and non prohibited flavours. It shall be free from added coaltar colouring matter and any other ingredient injurious to health.”

According to the third chapter of the FSS Regulations (2011), magnesium carbonate can’t be added to any food item. The sole exception to this is as an anti-caking agent, and even then only in restricted amounts in “table salt, onion powder, garlic powder, fruit powder and soup powder”, or when explicitly permitted.

When asked if such a permission existed, to include anti-caking agents in pan masala, FSSAI CEO Arun Singhal didn’t respond. Government authorities in Bihar and Jharkhand also interpreted the FSS Regulations in a way that indicated such permissions don’t exist.

Experts told The Wire Science that this is because magnesium carbonate has two types of harmful effects. First, it improves nicotine absorption in the body and gives the tobacco product a bigger ‘kick’, which then increases the chances of addiction. Second, the compound accentuates nicotine’s carcinogenic properties.

But even as at least two states have reported the presence of magnesium carbonate in pan masala sold within their borders, the FSSAI has not endeavoured to take those responsible to task or to remove these products from the market.

In 2019, the Bihar government tested 38 samples of popular brands for the presence of magnesium carbonate. Those of 15 brands tested positive (see lab report below).

Kumar also wrote to the then Union health secretary Preeti Sudan apprising her of his findings and decision the next month. The Wire Science has read a copy of the letter. Its last paragraph reads thus:

“We request you to kindly look into the serious matter and also it is suggested that FSSAI may be directed to consider cancelling the licence of these pan masala brands who are adding adulterants in their products and making misleading claims on their packages at the cost of public health.”

Most of the brands affected by Kumar’s decision had their manufacturing units outside Bihar at the time, with manufacturing licences awarded by FSSAI.

Some of the samples also tested positive for nicotine, which is banned in all foods. And Kumar’s letter said this wasn’t his first such discovery – that some of the implicated brands were habitual offenders.

Singhal, the FSSAI CEO, wrote back to the Bihar government on November 5, 2020. His letter was clear that nicotine was prohibited in all foods. But surprisingly, he took an equivocal position on the presence of magnesium carbonate. Singhal’s letter, which The Wire Science has seen, read:

The FSSR text is clear that magnesium carbonate shouldn’t be present in food products, so Singhal’s position, and FSSAI’s by extension, is perplexing. It also contradicts a stance that the same body had taken in a tobacco-related case at the Patna high court in 2019. The FSSAI affidavit filed in the Patna high court then read: (emphasis added)

“The matter has been discussed in the Scientific Committee of the Food Authority which opined against the inclusion of magnesium carbonate in pan masala.”

In an annexure to this affidavit, FSSAI also presented the proceedings of the Scientific Committee. Excerpt: (emphasis in the original)

The Bihar government responded to the November 2020 letter from Singhal on February 18, 2021. It reminded FSSAI of this affidavit and the recommendation of the scientific panel: “In the background of these facts and circumstances, we seek your kind consideration and further guidance.”

The Bihar government received no reply, so it sent a reminder on February 1, 2022 – a full year later. But it has received no word since.

In 2020, the Jharkhand government tested certain brands for the presence of magnesium carbonate. It reported that 41 samples from 11 brands had tested positive (see lab report below).

The food safety commissioner of Jharkhand, Nitin Kulkarni, banned these products for sale and distribution on July 8, 2020. Like his counterpart in Bihar, he also wrote a letter to FSSAI CEO Singhal, on November 11, 2020. His letter, a copy of which is with The Wire Science, said:

“The pan masala companies are not located in the state of Jharkhand. We request you to kindly intervene in the matter and consider cancelling the licence of the pan masala brands/companies who are adding adulterants to their products and making misleading claims on the packages at the cost of public health.”

And just like Bihar, the state government is yet to receive a reply from FSSAI.

According to the 2016 Global Adults Tobacco Survey, 23.5% and 35.4% of the populations of Bihar and Jharkhand consume smokeless tobacco in some form.

The cases of these two states are not isolated – both in incidence and in principle.

In July 2012, seven years before any of these cases, the Maharashtra government banned some popular pan masala brands in the states for the same reason. Tobacco industry leaders challenged the ban in the Bombay high court just two months later, but the court sided with the state.

The Wire Science emailed a set of queries to Singhal and later sent him a reminder via WhatsApp. Singhal responded to the latter: “The matter is sub-judice.” He didn’t respond to further questions, including one to explain the case to which he was referring.

Supreme Court advocate Ranjit Singh said it’s not clear why the FSSAI CEO took recourse to the “sub-judice” argument. According to Singh, the tobacco industry has challenged every anti-tobacco law but that courts have always ruled against it. “Anybody can go and file any case,” he told The Wire Science. “Until the court stays [any regulation], there is no impediment in implementing it.”

Singh, a former legal consultant for the Union health ministry on tobacco-related issues, used the example of FSSAI regulation 2.3.4 – a landmark regulation that was the first to prohibit the use of nicotine in tobacco products. It entered into force in August 2011, and the tobacco industry fought it in court.

On a final note in September 2016, the Supreme Court refused any stay or relief, and ruled instead that all state governments must ensure they comply strictly with 2.3.4.

But if the country’s fight against adulterated tobacco products is to have any teeth, Singh said, FSSAI will have to take the lead because the states can’t do much. “They can go on extending the ban year after year, only if they so wish. But if the issue has to be resolved meaningfully, then the licences to manufacture have to be revoked,” he said.

“Only the FSSAI can do that.”

As the Centre continues to stay mum on magnesium carbonate, health experts have no doubts about what they can expect to happen if the substance is allowed to enter the market.

“We know nicotine is carcinogenic. Magnesium carbonate increases the potency of nicotine to work in that direction,” D.N. Sinha, former regional advisor of the WHO’s ‘Tobacco Free Initiative’, said.

Sinha clarified that antacids also contain magnesium carbonate, but its quantity is regulated and that people don’t consume antacids for a long time without a doctor’s supervision.