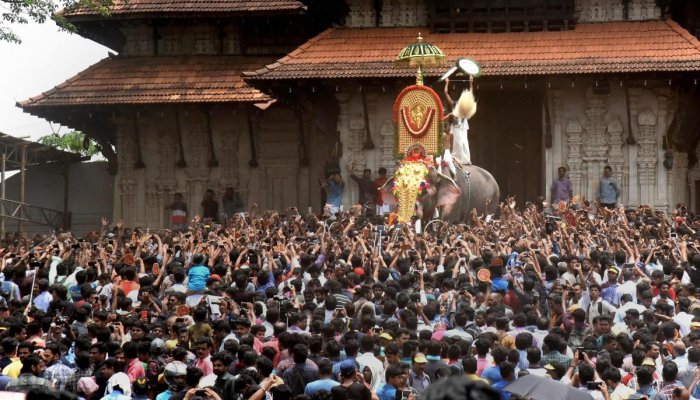 Everyone Above Age 18 Eligible for COVID-19 Vaccine From May 1, Centre Announces

Update, 10 pm, April 19, 2021: The Kerala government has decided to close the Thrissur Pooram festival to the public, hours after it was reported that the state health minister had said that the festival will be conducted as usual in spite of the health concerns associated with large crowds during the pandemic. NDTV reported now that instead of a festival, Thrissur Pooram will be held as a ritual, with only key organisers in attendance. The rituals will be screened online.

New Delhi: Kerala health minister K.K. Shailaja has said that the Thrissur Pooram festival cannot be cancelled despite the public health concerns of organising large gatherings during the COVID-19 pandemic, as it will “cause many problems”.

“Many preparations have been made for the festival, so it is not possible to cancel it entirely. It will cause many problems. Clear instructions have been given to conduct it with caution which the Devaswom committee has been agreed to. Even those who test negative should still wear masks, apply sanitisers and keep as much distance as possible from each other,” The News Minute quoted her as saying.

Children and pregnant women have been barred from attending the festivities.

The annual festival celebrated at the Vadakkunathan temple in central Thrissur is the biggest Hindu festival in Kerala, in terms of the number of people who attend. Normally, according to The News Minute, around two million people attend every year.

The opposition Congress and Bharatiya Janata Party in Kerala, as well as temple committees in the state, have been stiffly opposing cancellation of the event. It had been cancelled last year because a national lockdown was in place at the time.

While the main festival day is April 23, parts of the festivities began on Saturday, when two temples in the city – the main organisers of the event – held flag-hoisting ceremonies. According to The Hindu, several people attended these events despite fears of rising COVID-19 infection.

Several activists have questioned how coronavirus protocol can be implemented at such a large event. The Kerala Sasthra Sahithya Parishad (KSSP), a scientific organisation, has told the government that the celebrations should be “ritual-only”, without people’s attendance. “The situation is the same as last year’s. The government ought to have more stringently said people’s participation will not be allowed,” Muraleedharan A.P., president of the KSSP, told The News Minute.

On the same day when Shailaja said the Thrissur Pooram festival cannot be cancelled, the Kerala government asked the Centre for 50 lakh vaccine doses. “Like the rest of the country, Kerala too has been seeing a sudden surge in cases since the end of March. We are trying to destroy this second wave by crushing the curve. We have amped up testing. Bulk testing – about 2.5 lakh in two days – is being done, giving priority to people aged under 45 who’ve had mass contact and those above 45 who have not been vaccinated yet,” Shailaja said.

The report comes amid a state government directive to all domestic travellers coming to the state to undergo RT-PCR tests. Ernakulam continued to record the highest number of fresh cases (2,835), Kozhikode (2,560) followed by Thrissur, Kottayam, Malappuram, Kannur and Palakkad.

The government has released Rs 5 crore each to all district collectors to carry out all curative, control and preventive activities against infection as was done in 2020-21.