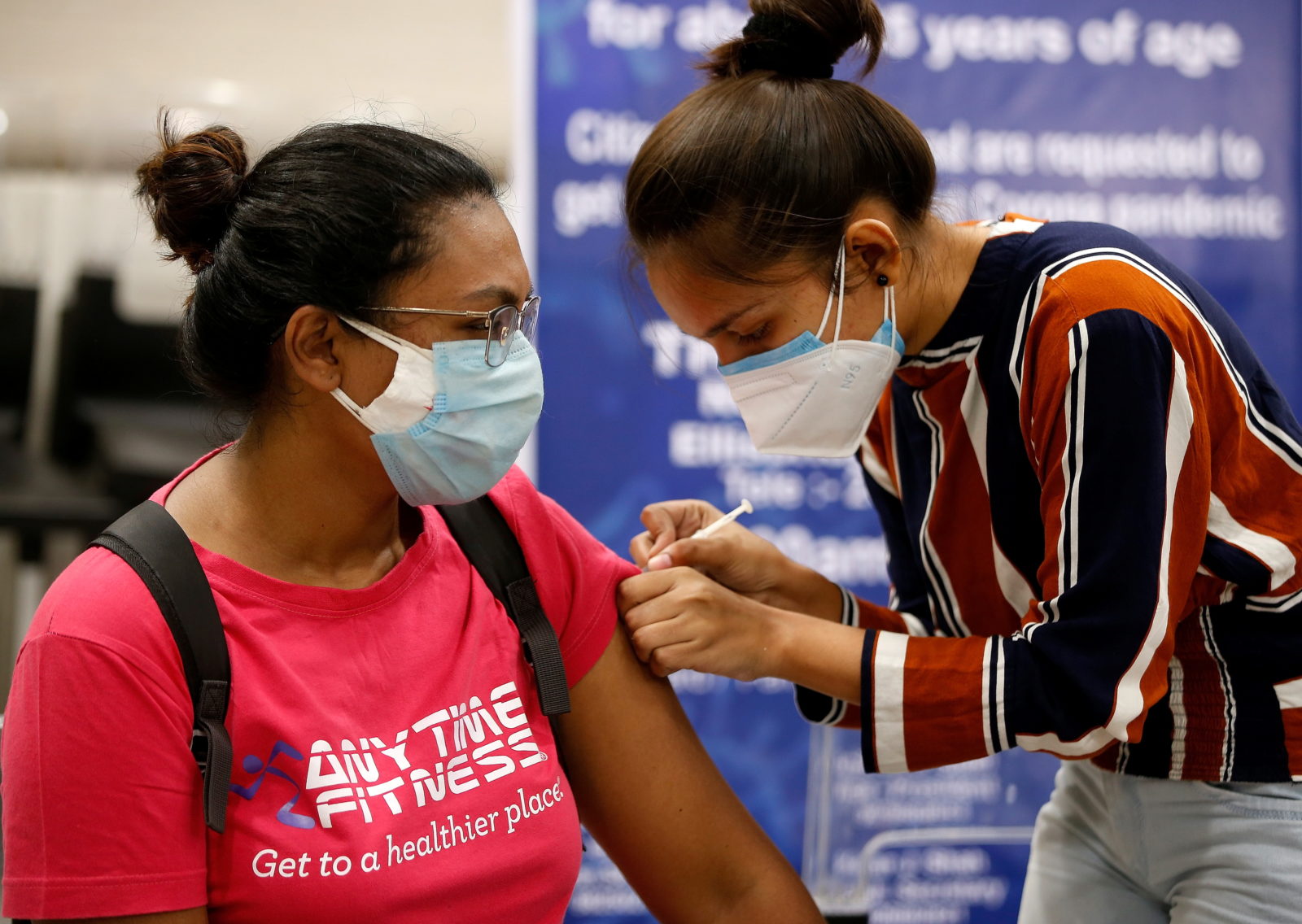 COVID-19 Is Just Another Problem in Palghar’s Adivasi Villages

A woman receives a dose of Covishield at a vaccination centre in Ahmedabad, May 1, 2021. Photo: Reuters/Amit Dave

Bengaluru: The National Technical Advisory Group on Immunisation (NTAGI), a government panel, has recommended increasing the gap between two doses of the Covishield COVID-19 vaccine to 12-16 weeks, up from the previous maximum of eight weeks.

The group, chaired by N.K. Arora and which met recently, also made four other important recommendations:

1. That pregnant women are cleared to take any of the vaccines approved for use in India’s vaccination drive (Covaxin, Covishield or Sputnik V),

2. That all lactating women are eligible to receive the vaccines any time after delivery,

3. That COVID-19 patients who have received anti-viral monoclonal antibodies or convalescent plasma should defer vaccination for three months from the day of hospital discharge, and

4. That those who have tested positive for COVID-19 should defer their vaccination to six months after recovery.

On May 12, the National Expert Group on Vaccine Administration for COVID-19 (NEGVAC) – the body headed by NITI Aayog member Vinod K. Paul – accepted NTAGI’s recommendations, as did the Ministry of Health and Family Welfare.

Three of the group’s five recommendations have raised doubts that the group, functioning under the Centre’s auspices, are designed to give the Indian government more time to purchase more vaccines, following the Modi government’s botched vaccine strategy.

“Based on the available real-life evidence, particularly from the UK, the COVID-19 working group agreed to increase the dosing interval to 12-16 weeks between two doses of the Covishield vaccine,” a government source told PTI. The inter-dose gap for Covaxin has been left unchanged at 28 days.

Both Covaxin and Covishield are two-dose vaccines. Covaxin uses the inactivated virus technology, in which viral particles modified to be unable to replicate are injected into the body to ‘teach’ it to respond appropriately to the viruses’ infection. Covishield uses a modified adenovirus to transport the coronavirus’s spike gene to cells in the body, where the cells make the spike protein, attracting the immune system’s attention.

The questions about whether the recommendations buy the government time to get more vaccines aren’t unfounded. Several states, including Delhi, Maharashtra, Karnataka, Telangana and Uttar Pradesh, have invited bids from international vaccine-makers to make up for the acute domestic shortfall. The latter is the product largely of a government that underestimated demand and overestimated supply, failed to forge advance purchase agreements with manufacturers and most recently floated a pricing strategy that pushes the onus of vaccinating the bulk of Indians to state governments and private hospitals.

India isn’t the first country that’s selling Covishield and has recommended an inter-dose gap of 16 weeks. Spain did so in late April, for vaccine recipients younger than 60 years. While this gap is in excess of limits set by the European Medicines Agency, it’s somewhat in line with the results of a study published in The Lancet in March this year.

The study pooled and analysed data from four clinical trials involving 17,177 participants across Brazil, South Africa and the UK. According to a summary of the results published by BMJ:

The analyses suggest that it is the dosing interval and not the dosing level which has the greatest impact on the efficacy of the vaccine. This is in line with previous research supporting greater efficacy with longer intervals with other vaccines such as influenza and Ebola. The study found vaccine efficacy reached 82.4% after a second dose in those with a dosing interval of 12 weeks or more (95% confidence interval 62.7% to 91.7%). If the two doses were given less than six weeks apart the efficacy was only 54.9% (CI 32.7% to 69.7%).

According to a review of the study, also published in The Lancet, there are a few potential sources of bias:

… these studies were not prospectively designed to establish whether vaccine efficacy would differ by dose interval; therefore, these post-hoc exploratory findings could be biased. Other limitations are that participants were not randomised to dosing interval, only one of the four trials was double-blind, and the single-dose recipients were self-selected. Furthermore, baseline characteristics between the single-dose and two-dose cohorts were substantially different, with an older median age, higher proportion of men and non-white participants, and a smaller proportion of health or social care workers in the two-dose cohort than in the single-dose cohort. Also, worth considering is whether these results would hold up with widespread circulation of more transmissible and lethal viral variants.

Sheila Bird, a former programme leader at the MRC Biostatistics Unit, University of Cambridge, assessed the study’s paper – especially the part that said “no or few patients aged 56+ years had both an inter-dose interval of more than 8 weeks and had SARS-CoV-2 anti-spike IgG measured at 28 days after second dose.” So, she told the UK Science Media Centre, “any analyses from this of inter-dose intervals longer than 8 weeks… in respect of SARS-CoV-2 anti-spike IgG should be limited to persons aged 18-55 years… [Otherwise] we risk confounding.”

This could be why Spain’s decision to extend the AstraZeneca vaccine’s inter-dose gap to 16 weeks is limited to recipients younger than 60 years. However, India’s NTAGI, which released its recommendations today, hasn’t specified any age limits, at least according to the health ministry press release.

The UK’s Medicines and Healthcare products Regulatory Agency was the first body of its type to flag that the efficacy of the AstraZeneca vaccine – called Covishield in India – could change according to the gap between doses. However, the UK government also acknowledged potential issues in the vaccine’s supply. When it began its vaccination drive in early January 2021, it planned to vaccinate as many eligible recipients as possible with the first dose, and took advantage of the longer inter-dose gap to stock up for the second dose.

On the other hand, India – after having overestimated the production capacities of Serum Institute and Bharat Biotech – started with a plan to vaccinate 300 million people between February and July 2021, and announced in April that it would vaccinate people aged 18-44, the country’s largest demographic group, from May 1. These plans have since fallen flat. The Centre said state governments would have to negotiate separate prices with manufacturers for their doses and also arrange for vaccine imports to their constituents without the Centre’s help.

As a result, as of May 12, only 10.1% of Indians had received at least one dose and 2.8% had received both doses. At least one state, Karnataka, has also temporarily suspended COVID-19 vaccinations for those aged 18-44 years to ensure people aged 45+ years receive both doses in time. (Private hospitals can still administer shots for the 18-44 age group but their supply has been more iffy.)

In sum, an inter-dose gap of at least 12 weeks has been found to appreciably increase the vaccine’s efficacy, but this doesn’t mean we need to ignore the fact that this particular line of investigation is giving India another chance to fix its mistakes – a chance that a country of its size and resources shouldn’t have to need.