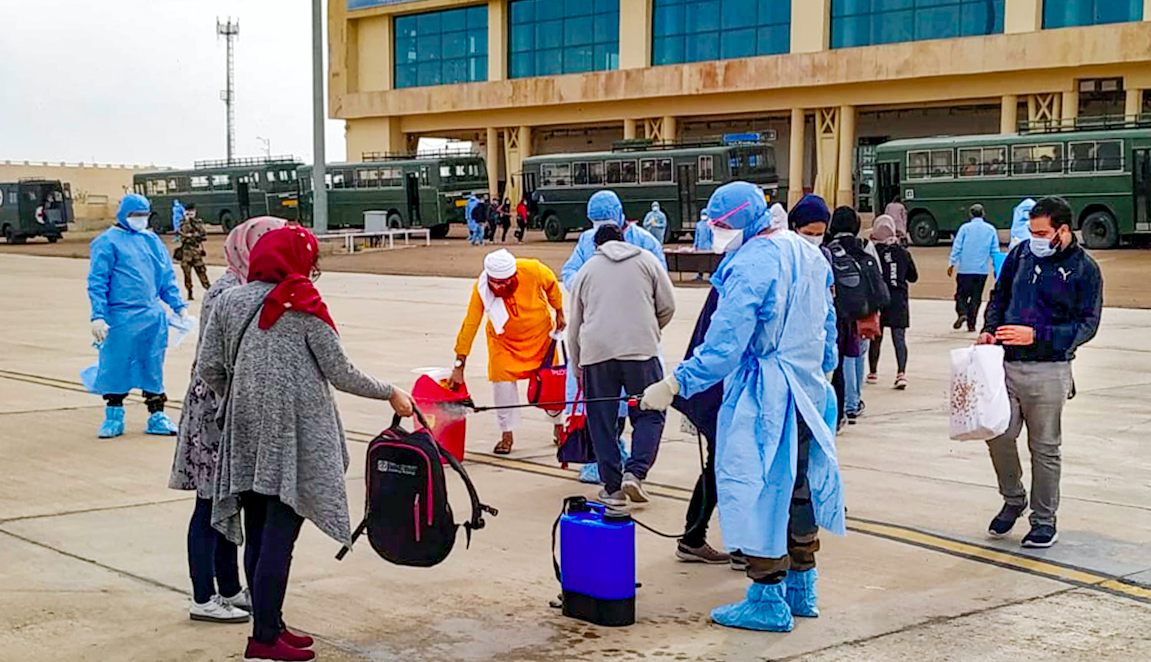 Why You Must Act Now to Stop the Coronavirus’s Spread

On Friday, India reported its highest jump so far in new cases of the coronavirus infection, with 63 new cases reported. As of 4:45 pm on Saturday, the total number of reported cases in the country is 283. The infection has now been identified in 22 states and union territories across the country. Four deaths have been reported in India so far.

Globally, the number of confirmed cases inched towards the 300,000 mark. Italy continued to report large number of deaths, with over 600 people succumbing on Friday. The country now accounts for 35% of the world’s 11,572 deaths.

As reports emerged that many migrant workers were returning to their villages because of the lockdown conditions imposed in many cities, Prime Minister Narendra Modi advised people against doing so. “Traveling in congestion increases the risk of spreading coronavirus. Wherever you are going, it will also be a danger to people. Will also increase the difficulties of your village and family.” he said,.

‘Janata curfew a drill, will not stop spread of disease’

Public health sector experts believe that the voluntary, 14-hour ‘Janata Curfew’ that Prime Minister Narendra Modi requested be observed on Sunday, may work as a public drill for a longer shutdown, but will not stop the spread of the coronavirus infection.

Anant Bhan, a researcher of public health and bioethics, told The Print that the ‘janata curfew’ is a symbolic move. Staying home for half a day is not expected to bring down the transmission of the disease, he said.

“A curfew of 14 hours is not going to make much of an impact, the move is to prepare people for staying at home, maintaining distance, which may be needed in the future,” Bhan said. “In case, we do need more mandatory lockdowns in the future, India being a liberal democracy would have to figure out how to implement them.”

The objective for India is to now ‘flatten the curve’ or ensure that precautions such as social distancing are followed to keep the daily number of new cases at a manageable level for medical workers. While the Janata curfew will not ensure the curve is flattened, it may help people mentally prepare for a longer curfew.

The single-day curfew does not also necessarily mean that no new cases of the disease will be reported on Sunday. Infected people, who have yet not been identified, could infect other members of the household.

According to news agency ANI, ‘limited local transmission’ of the coronavirus infection has been identified in parts on Nagpur

Sources tell ANI that limited local transmission of #Covid19 has been seen in some pockets of Nagpur. Testing strategies being strengthened. pic.twitter.com/G9vOCdsexq

Six new cases of the coronavirus infection have been reported in Rajasthan on Saturday. Of these, five are from Bhilwara and the other is from Jaipur.

According to sources, the five patients of Bhilwara are hospital staff who had come in contact with an already infected doctor. The staff is reported to have reached out to 5,080 people to identify if any other people may have been infected by the disease.

The screening is still going on and the district has been kept on high alert.

Census, NPR likely to be delayed

According to The Hindu, the Centre is set to postpone the Census and the exercise to update the National Population Register (NPR) owing to the coronavirus pandemic. The latter was scheduled to kick off in certain states on April 1.

Though no formal announcement from the Centre has been made, the newspaper said two government sources had confirmed to it that the Census and NPR exercises will not go ahead. They cited the Union health ministry’s guidelines which sought to limit mass contact on account of the coronavirus.

The state governments of Odisha and Delhi have asked the Centre to defer the Census and NPR operations by at least a month.

The NPR exercise has been mired in controversy, with many expressing an apprehension that it is the first step in a nationwide National Register of Citizens (NRC). Civil society activists believe the combination of the NPR-NRC and the Citizenship Amendment Act (CAA) could result in large-scale disenfranchisement of Indian Muslims.

Governments in at least 13 states, and also Delhi, have opposed the NPR in the format being prepared by the Centre. Many state assemblies have also passed resolutions against the NPR and the NRC.

The Centre has not backed down, and in an affidavit submitted in the Supreme Court in response to petitions against the CAA, the Centre called the NRC a “necessary exercise“.

Flight from Amsterdam diverted back

A flight from Amsterdam carrying 100 Indian passengers, including a pregnant woman, was not allowed to land in Delhi on Saturday because of worries over the COVID-19 pandemic. The flight had a clearance but was still not allowed to land, according to The Hindu.

Just in: KLM flight 871, with 100 passengers on board denied permission to land despite clearances due to “gap in understanding” by airport authorities. Passengers were Indians in transit from US, returned to Amsterdam after 15 hours in the air,including a pregnant woman.

The flight, KLM 871, was due to land in Delhi around 1 am on Saturday, but was “redirected” back to Amsterdam by civil aviation authorities when it was flying over Russia. It was carrying passengers in transit at Schipol Airport who had flown in from the US and Canada to catch a connecting flight.

While the health ministry reported that 258 people have tested positive for COVID-19 as of Saturday, the ICMR’s tally stood at 271.

The health ministry’s 258 tally also includes 39 foreign nationals, including 17 from Italy, three from the Philippines, two from the UK, one each belonging to Canada, Indonesia and Singapore. The figure also includes four deaths, which were reported in Delhi, Karnataka, Punjab and Maharashtra.

Assam to give Rs 1.5 lakh for residents stranded in foreign soil

The Assam government has decided that all permanent residents of the state who are stranded in foreign countries due to the coronavirus pandemic will be provided one-time financial assistance of $2,000 (Rs 1.50 lakh). This, according to reports, will be to help the residents in their sustenance until they can return home. The payment will be available only to those residents who have been stranded in foreign soil for a month.

“We have decided to transfer $2,000 to residents of the state who are stranded abroad for a month and are unable to return home due to the global shutdown following the coronavirus (COVID-19) outbreak,” said Assam health minister Himanta Biswa Sarma, according to NDTV.

As The Wire has reported, the Indian Council of Medical Research (ICMR) on Thursday said it will expand the strategy to discover more people who might have contracted COVID-19.

Thus far, the council has only been testing people with travel history to affected countries and subsequently exhibited symptoms of the disease and others who came in contact with these people. It has now expanded the tests to people show with symptoms of COVID-19 but whose link to foreign travellers or their direct contacts can’t be ascertained.

The UP police have booked singer Kanika Kapoor for negligence and committing acts that are likely to spread disease dangerous to life after she attended at least three gatherings in Lucknow, including a party where political leaders were present, and tested positive for the new coronavirus, an official said.

The FIR was registered at Sarojini Nagar police station on Friday based on a complaint filed by the Lucknow chief medical officer, said Police Commissioner Surjit Pandey.

Kapoor is said to have visited at least three gatherings in different areas of Lucknow.

She has become the first Bollywood celebrity to test positive for the deadly virus in the country and has said she is under complete quarantine and medical care.

In a statement on Instagram, the 41-year-old ‘Baby Doll’ singer said she developed signs of flu in the last five days.

The Wire Science@TheWireScience
3 Following 25.7K Followers
The SoPs had been issued through a simple office memorandum, instead of under the terms of the Environment Impact A… https://t.co/Y4Kerbutro
17 hours ago
The findings suggest that the ban has not been effective in controlling seahorse extraction and add to concerns on… https://t.co/TfoCG8fPNb
18 hours ago
3
Chandrayaan-3, India’s lunar mission, is likely to be launched during the quarter of 2022, Union minister Jitendra… https://t.co/gcFNqseEz3
20 hours ago
2
The Madras HC stayed a set of SoPs that the government had issued to facilitate industries in procuring post facto… https://t.co/LfbFkjfWZm
21 hours ago
India has a system that rewards success based on officially reported numbers, incentivising many states to 'manage'… https://t.co/gJzDAGln9r
22 hours ago
1 1
Researchers who study casteism in science say that even as Dalits have mobilised for their rights, they have encoun… https://t.co/59Ju8kltgi
23 hours ago
1
For the past two decades, the catch and trade of seahorses has been banned in India. However, a new study reveals… https://t.co/Quz39m2l5Y
24 hours ago
1
A new study has found that breathing ambient air with unsafe levels of fine particulate matter causes approximately… https://t.co/VBjvORcb3x
1 day ago
2 2
The state govt has not come out on rationale for building a high-speed alternate rail in Kerala, to the tune of bei… https://t.co/VLeu2Pb5cv
1 day ago
1
Dry season droughts have become increasingly severe in Vietnam in recent years. Decades of intensive agriculture a… https://t.co/dejHsGJGfS
1 day ago
1
When and where do honey bees sleep? Do honey bees also experience light and deep sleep states? How can we deprive h… https://t.co/YntncKH9t7
1 day ago
Social media developers can take steps to foster constructive disagreements online through design. But our findings… https://t.co/aNoFA8B4kz
1 day ago
In Chirgaon, only 22 vultures belonging to two species that are typically found in the area were surviving on a han… https://t.co/jg0rhmKy6Y
2 days ago
2 5
Interviews with young Dalit scientists, along with a growing body of academic work, detail the obstacles Dalits sti… https://t.co/sJKQBgslLT
2 days ago
3 5
Kerala is planning to construct a high-speed railway line that connects capital city of Thiruvananthapuram in the s… https://t.co/BvOZdlw1yV
2 days ago
1 1
Contact us