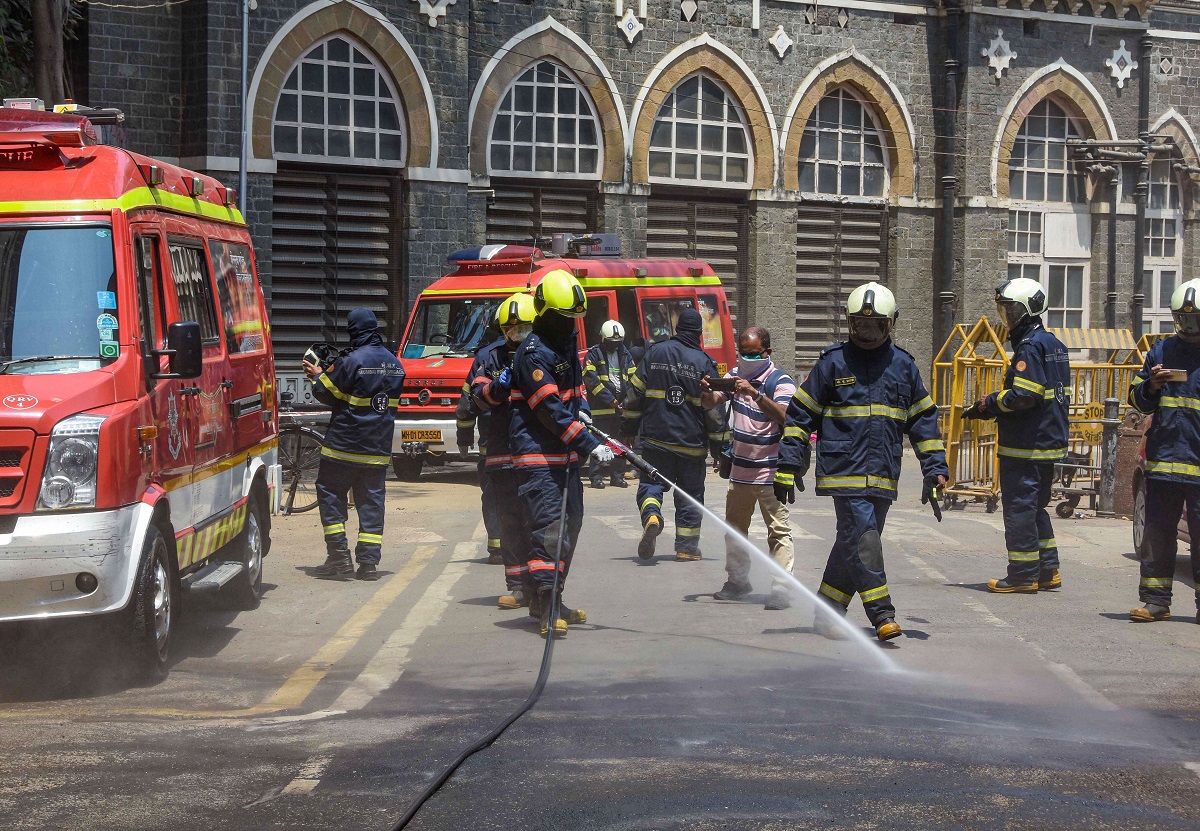 Man Ends Life in Karnataka Over Doubts of Coronavirus Contraction

While the first day of the nationwide lockdown in India severely disrupted supply chains across the country, India continued to report a steady rise in the confirmed cases of the coronavirus infection. On Thursday morning, the health ministry announced that the total detected cases (including foreign nationals) has crossed 600.

As of 10:15 am on Thursday, the health ministry said there are 633 active cases in the country (of which 47 are foreign nationals), while 45 people have been cured, discharged or have migrated. The ministry reported that the disease has also resulted in the death of 16 people, taking the total confirmed cases in the country to 694.

The worldwide death toll due to the viral infection stands at over 21,200 as of Wednesday morning. The death toll in Italy (7,503) is now more than double that of Spain (3,647), which has overtaken China (3,169) to report the second highest deaths. The virus has now been reported in 175 countries or regions across the world. On Wednesday, the highest number of new cases were reported in a single day across the world, just under 50,000.

A 70-year old woman, who died after being found positive for the coronavirus in an initial test, has become Karnataka’s second COVID-19 fatality with results confirming the infection on Thursday as the total number of affected by the contagion in the state rose to 55, the health department said.

Results of three other people, including a 35 year-old resident of Mysuru with no travel and contact history so far, returned positive on Thursday, besides that of the woman who died on Wednesday, it said.

“Till date 55 COVID-19 positive cases have been confirmed which includes 2 deaths and 3 discharges,” the department in a mid-day situation update said.

It has been decided that scheduled international commercial passenger services shall remain closed till 18:30 hrs (GMT) of April 14, 2020. This will not apply to approved international all-cargo operations & flights: Directorate General of Civil Aviation pic.twitter.com/NKQAw89rMd

The police had issued a statement directing its personnel to allow persons and vehicles engaged in essential services to operate in Delhi and listed names of retailers and online delivery services that should be allowed to function.

However, the order was withdrawn with immediate effect hours after it was issued, stating that the revised guidelines will be released and all traffic, picket and beat staff would be briefed accordingly.

The police did not cite any reason for withdrawing its previous order, but a senior police official said essential supplies would continue and a uniform order across states would be issued soon.

Keeping in view the possible emergencies in wake of the novel coronavirus outbreak in the country, the Odisha government on Thursday signed agreements with private hospital medical to set up two large COVID-19 hospitals in the state capital.

The new COVID-19 hospitals are likely to come up by April 15, an official said adding that Chief Minister Naveen Patnaik has directed to provide state-of-the-art facilities for treatment of COVID-19 patients.

The Indian Air Force (IAF) on Wednesday said it has created nine quarantine facilities of 200-300 personnel capacity each at its nodal bases across the country to combat the outbreak of novel coronavirus.

“To monitor the prevailing situation and provide immediate response and assistance as required, a 24×7 crisis management cell has been set up at the IAF Headquarters and various Command Headquarters,” stated an IAF press release.

IAF aircraft are continuing to fly in medical supplies and doctors to Leh and fly out blood samples for COVID-19 testing to Chandigarh and Delhi, the release noted.

A 73-year-old man from Bhilwara, who had tested positive for the coronavirus infection and was in a coma due to kidney failure died on Thursday.

It was the second death of a coronavirus patient in Rajasthan, but authorities refused to attribute the deaths directly to the coronavirus infection.

Earlier, an Italian tourist, who had recovered from coronavirus, had died later of a heart attack due to lung and heart problems at a private hospital in the state capital.

On the septuagenarian’s death, additional chief secretary (health) Rohit Kumar Singh said, “A death has occurred but the patient was in coma due to kidney failure and diabetes before coronavirus spread in Bhilwara. So, it would not be appropriate to say that he died of COVID-19 as the death occurred due to pre-existing diseases.”

The 73-year-old man with the chronic kidney and diabetes issues was admitted to a Bhilwara private hospital, whose three doctors and nine nursing staffers had been found positive for coronavirus infection.

Iran on Thursday announced 157 new deaths from the coronavirus infection, raising the official number of fatalities to 2,234. The country also banned intercity travel to try to curb the spread.

Health ministry spokesman Kianoush Jahanpour also said that 2,389 new cases have been confirmed in the past 24 hours, bringing the total number of declared infections in one of the world’s wost-hit countries to 29,406.

“Fortunately, until today 10,457 of those infected have recovered and been discharged from hospitals,” he told a news conference.

Jahanpour said that the spread of the new coronavirus and its rate of infection was “growing steadily” in Iran.

The Islamic republic imposed strict new containment measures Thursday, after weeks of public appeals largely failed to prevent hundreds of thousands of Iranians taking to the roads to visit family for the Persian New Year holidays.

The Karntaka government said it has received several complaints from doctors, paramedical staff and healthcare workers who are being forced to vacate their rented residences. Taking a strong view of such incidents, the government said this amounts to obstructing a public servant in discharging their duties.

Local authorities were asked to take strict action against landlords and house owners who are forcing doctors to vacate. 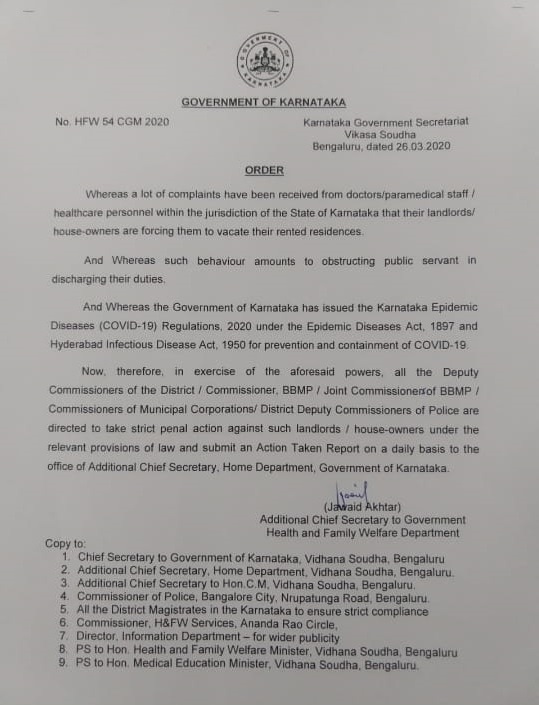 Online service providers/e-retailers delivering essential services & goods to be allowed. All essential services shops can remain open 24 hours so that there is no rush of people: Delhi Lt Governor Anil Baijal #CoronavirusLockdown pic.twitter.com/8xon3ENClg

Delhi chief minister Arvind Kejriwal also said that people delivering food can show their ID cards to the police to continue their services.

Food home delivery services have been allowed, the delivery persons can show their ID cards that will be sufficient. Mohalla clinics will continue to function but with all precautions: Delhi CM Arvind Kejriwal pic.twitter.com/wAGND9M9Go

A 65-year-old man hailing from Hyderpora area of Srinagar died on Thursday, the first fatality in Jammu and Kashmir due to coronavirus.

“As we share the sad news of our first #Covid19 fatality, my heart goes out to the family of the deceased. We stand with you and share your grief,” mayor of Srinagar Junaid Azim Mattu tweeted.

Four people had tested positive for coronavirus in J&K on Wednesday, taking the total number of confirmed cases to 11. Authorities in Kashmir have expressed apprehensions that there could be more cases in the Valley as a significant number of people appeared to have concealed their travel history.

On Wednesday, Gujarat reported its second death due to the viral infection. An 85-year-old woman died in a civil hospital in Ahmedabad. In Karnataka, a 75-year-old woman who is suspected to have COVID-19, the disease caused by the coronavirus, died. The government is still awaiting the final test report of the woman. On the same day, Madhya Pradesh also reported its first coronavirus-related death, a 65-year-old woman in Ujjain.

An elderly man tested positive for the coronavirus in West Bengal, the state’s tenth confirmed case of the viral infection. Health officials on Thursday said the 66-year-old man from Nayabad in Kolkata had no history of travelling abroad or outside the state.

He had recently attended a wedding in Midnapore and might have come in contact with a person infected with the virus. He is undergoing treatment in the isolation ward of a private hospital and his family has been kept in home isolation under police protection, sources told news agency PTI.

Three more persons, including a woman, have tested positive for coronavirus in Chhattisgarh, taking the total number of confirmed cases in the state to six, officials said on Thursday.

One of the cases was reported from the state capital of Raipur, and one each from Durg and Bilaspur.

Of the three new patients, two men, one from Raipur and another from Bhilai (Durg), have been admitted to the isolation ward of AIIMS.

With this, the state’s tally of COVID-19 patients has gone up to six.

Earlier on Wednesday, two persons, a 26-year-old woman from Raipur and a 26-year-old man from Rajnandgaon, with recent foreign travel history, were found positive for the deadly virus.

According to NDTV, a doctor at a mohalla (community) clinic in northeast Delhi has tested positive for coronavirus, health officials said on Wednesday. The doctor may have come in contact with 600 people, reports said.

The doctor’s wife and daughter have also been infected with the coronavirus and have been admitted to a hospital.

People who visited the clinic, which is in Maujpur area, between March 12 and March 18 have been asked to quarantine themselves and contact a doctor if they experience symptoms of the coronavirus infection.