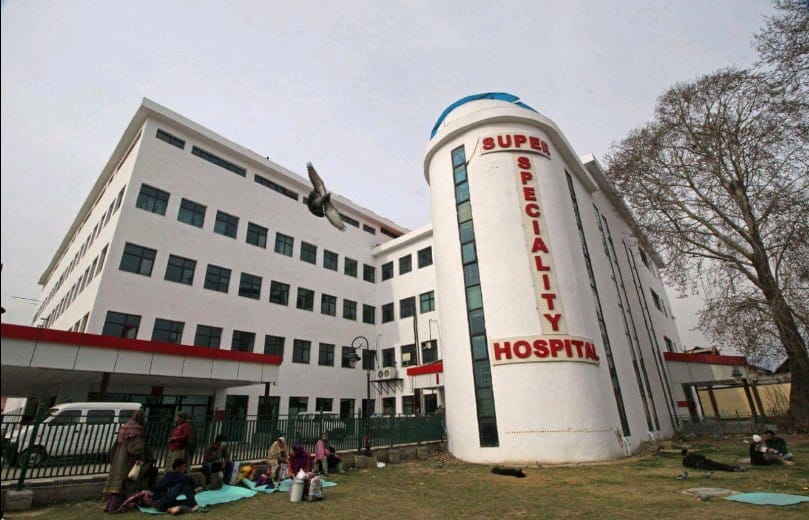 Srinagar: A hospital in Srinagar reserved for treating critically ill patients has turned into a COVID-19 hotspot.

In the last two weeks, two COVID-19 patients, a father-son duo, have died while around 13 others including hospital staff have tested positive for the infection at the city’s super-specialty hospital (SSH).

As a result, the SSH has closed at least three wards and a dialysis centre even as staff members alleged the Government Medical College (GMC) was in denial about the severity of the situation. The SSH functions under the administrative control of the GMC.

On April 25, a patient from Anantnag district was referred to SSH’s plastic surgery department for skin-grafting after she developed an abscess. Since the patient had visited four hospitals before coming to SSH, the doctors insisted she be tested for COVID-19. And the day before she was to undergo the surgical procedure, her report came back positive. Panic ensued, and doctors and paramedics of the plastic surgery and medical oncology departments were soon tested for COVID-19 since both departments share a ward.

However, the institute only hit the headlines after a 34-year-old man from Srinagar who had been tending to his ailing father at the hospital got infected with COVID-19 and died on May 7. According to doctors, the young man died of a cytokine storm, a condition whereby the body’s immune system becomes aggressive and damages the body itself.

On May 11, his father, who had been suffering from cancer and also had COVID-19, also passed away.

Also read: Explained: What is a Cytokine Storm?

In the four days between the two deaths, a doctor, three staff nurses, a sanitation worker, two patients and seven attendants tested positive for COVID-19.

Sensing the situation had turned grim, SSH began to test widely for COVID-19. “We conducted more than 300 tests of doctors, paramedics and attendants as well as patients,” SSH medical superintendent Dr Shabir Ahmad said. “At the same time, we took all the necessary measures to contain the spread of the infection.”

But the growing number of cases also forced the hospital to cancel several surgeries as well as halt new admissions after the wards designated fr plastic surgery, medical oncology and cardiology treatment were closed.

“The normal functioning of the hospital took a hit as the entire staff of plastic surgery and surgical oncology, including doctors, paramedics, nurses and orderlies were sent to quarantine,” a doctor said on condition of anonymity. “In gastroenterology, expect for one batch of doctors, all staff members including senior doctors have also been quarantined.”

The same doctor said he and others began to suspect that people moving around within the hospital were transmitting the virus, and that the management could have contained it by regulating the movement of staff.

“Unfortunately, it didn’t happen in time, and the intermixing of attendants and staff members continued until more cases came to the fore.”

According to another doctor, patients had also been discharged from at least two wards on the days new cases were reported from both units. “One patient was later brought back while others” couldn’t be tracked down, the doctor said. “If an area reports a single COVID-19 case, it is declared a ‘red zone’ and the movement is totally restricted. Here, we had cases in the double digits but neither was any containment protocol followed nor was the movement of attendants and patients controlled.”

The Kashmir Valley has reported 802 COVID-19 cases since March 18 – when the first patient, a woman from Srinagar, tested positive. The total number of cases in Jammu and Kashmir has since been 879, of which over 80% have been asymptomatic.

GMC principal Dr Samia Rashid has denied any mismanagement on the administration’s part to handle the situation at SSH. “This was a COVID-19-free hospital. … The [woman] was admitted for surgery when she tested positive and then attendants and other cases happened,” she said.

Asked of measures taken to limit the footfall of people in the hospital, Dr Rashid said, “What can you do? The patients are accompanied by attendants. You know how Kashmiris are. They just barge into [the hospitals].”

But when asked about the steps the hospital was taking after the number of cases there began to surge, Dr Rashid turned defensive. “Why are you interrogating me? I don’t want to talk about it.” She didn’t respond to further requests for comment.

Protests against the administration

On Monday, May 11, the hospital’s nursing staff began a protest accusing the administration of “mismanaging” the situation and putting them at risk. “After the first case, they didn’t seal the ward and hence the infection spread to other wards,” a nurse told the press. “Owing to their negligence, nurses too have tested positive.”

She said that the administration remains reluctant to acknowledge the gravity of the issue as well as to provide PPEs so the nurses could be sure they can work without fear of being infected.

Another nurse said after the cases began to emerge, the entire hospital staff became suspect. “But the administration is delaying our screening despite completion of all formalities. Even patients and their attendants haven’t been screened yet,” she said.

“No information has been put out to make people visiting the hospital aware of the grim situation. They could have [put up] some posters in the hospital premises to create awareness.”

The medical superintendent Dr Ahmad said they had decided to install a “mechanism to ensure protection to the hospital staff” and limit the flow of people as well. “We are hopeful [that we will] resume the normal services soon since the samples taken from different areas of the hospital haven’t shown any signs of infection,” he said.

The Wire Science@TheWireScience
3 Following 25.8K Followers
Another by-product of crocodile-human conflict is retaliatory killings, in which humans destroy crocodile eggs or k… https://t.co/q2oGaws1ou
7 hours ago
2
An Oxfam India report found that the average life expectancy in India was up to 69 years by 2015 but that among peo… https://t.co/CmuKUoPrY2
8 hours ago
1
More than 200 samples of genetic sequences isolated from early COVID-19 patients in China, and which had been remov… https://t.co/FJXdkXqwpk
20 hours ago
More and more climate scientists are saying that the recent extreme rainfall is a direct fallout of global warming… https://t.co/x7fnXEhHf2
21 hours ago
Existing crop of COVID-19 vaccines offer high protection against severe COVID-19, hospitalisation and deaths. We n… https://t.co/l2kbSDRT2t
22 hours ago
2
RT @shubhamsoni__: My favourite read for the fortnight is here! I read this coloumn with utmost curiosity and belief that today I am going…
23 hours ago
1
Our survival instinct ensures we fear large carnivores. The people in flood-hit Sangli, likely experienced this re… https://t.co/G3gHttBVOg
23 hours ago
1 1
Inequality in outcomes stems from inequality in access to medical services and the wider living conditions. Our un… https://t.co/SS0DKT3HZy
24 hours ago
The Supreme Court directed that the environmental clearance already granted should be kept in abeyance until the ma… https://t.co/JQhYCoeuLd
1 day ago
1
Edgar Allan Poe believed a machine could calculate, because calculation was a fixed and determinate process, but no… https://t.co/YUC3obAWDh
1 day ago
6 5
The gender disparity in India’s COVID-19 vaccine drive has narrowed, govt data showed, as pregnant women are now al… https://t.co/QBWciALE2T
1 day ago
2
Psychotherapy and imagination aren’t the only ways Deisseroth peers into the brain. Seeking answers to tough ques… https://t.co/HuOyBhFaZx
1 day ago
2 4
By the very fact of their isolation, islands permit rapid evolutionary changes and the formation of new species, al… https://t.co/RIy2eK9khZ
1 day ago
2
The government on Tuesday said that the reproductive number that indicates the speed at which COVID-19 is spreading… https://t.co/5XUSOGRWig
1 day ago
It is their yearning for friendship and sharing, even for classroom fights, and their eagerness to meet up with the… https://t.co/1GFQX2InT3
1 day ago
2
Contact us