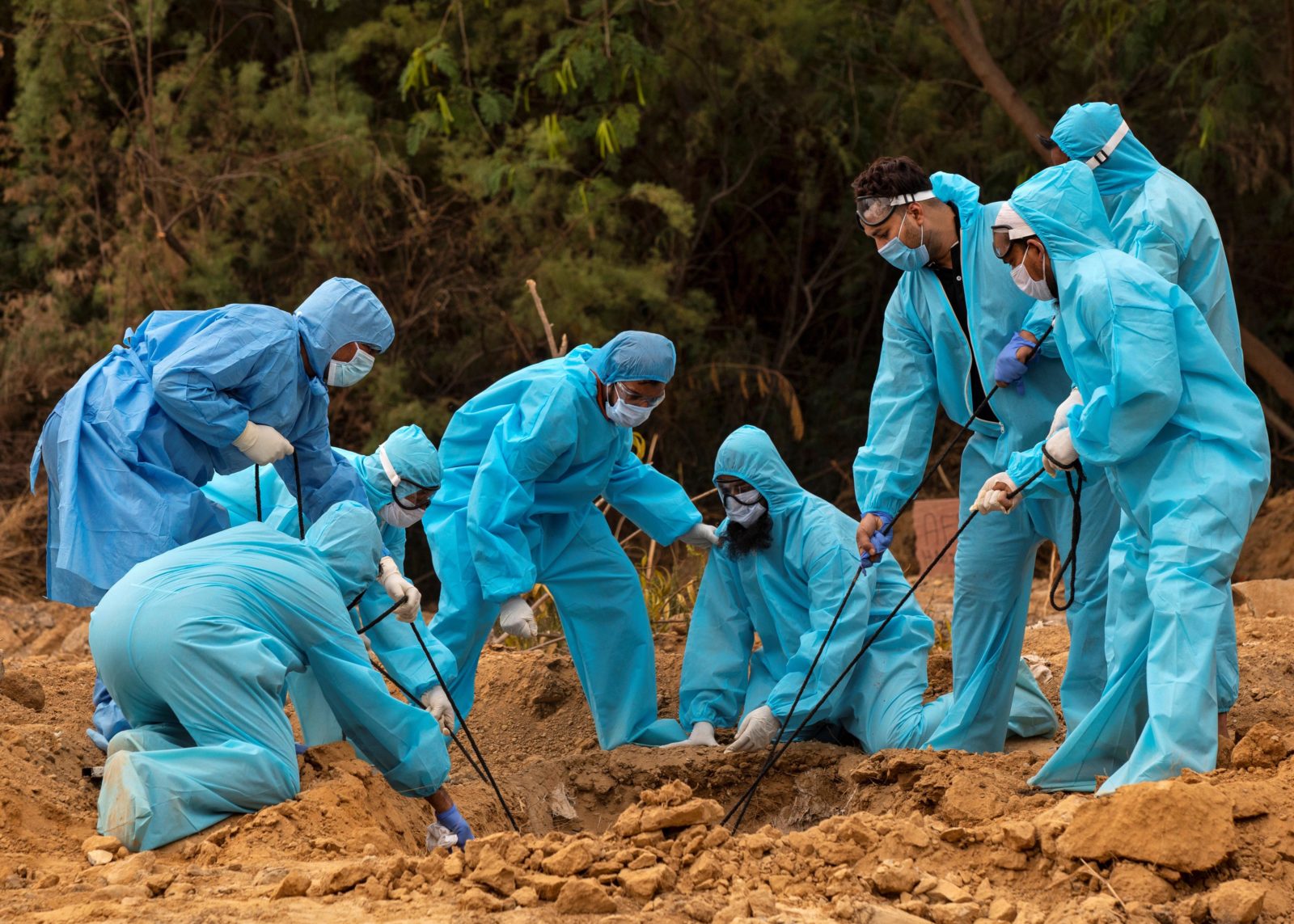 Watch: How to Wear and Remove a Mask Properly

A relative reacts as others, including a health worker, lower the body of a man who died from COVID-19 for burial at a graveyard in New Delhi, May 6, 2020. Photo: Reuters/Danish Siddiqui.

When we reduce the many stories of a pandemic to blocks of data, it is the death numbers which form the cold hard edge of this data. And yet, counting the dead is simple neither in theory nor in practice. Tracking COVID-19 deaths presents particular challenges not least because of how the disease interacts closely with other serious health conditions, termed comorbidities. Experts tell us that we are almost certainly underestimating COVID-19 deaths, but by how much? I’ll examine a story of ‘missing deaths’ in Maharashtra. First, some wider context.

One thing is certain: the scale of the global pandemic is not captured by reported COVID-19 fatalities. One province in Ecuador recorded 245 official COVID-19-related deaths and 40-times as many additional deaths in one 45-day period. These include, perhaps, the COVID-19 patient who commits suicide, the cancer patient unable to get to hospital, and the victim of domestic violence confined with an abuser. In India, we might add the migrant worker who dies of exhaustion walking home during lockdown. If the goal is to reconstruct the broad narrative of the pandemic, then it is crucial to consider all of the above deaths.

But when tracking the pandemic for disease surveillance and control our focus is narrower. According to WHO guidelines, a COVID-19 death is the death of a COVID-19 patient where there is no clear alternative cause of death that cannot be related to the disease. Despite these guidelines, there is wide variation between countries, and sometimes within a country, on which deaths make it into official figures. The site of death may also matter – was it a hospital, a care home, or someone’s home? – as well as whether test results were available and if comorbidities are present.

In India, not all deaths are registered and only a small fraction have an identified cause. This considerably increases the likelihood of missing COVID-19 deaths. In addition to structural problems, there has been official confusion. In the early days, the Centre’s messages were confusing about whether deaths of patients with comorbidities counted as COVID-19 deaths or not. The Indian Council of Medical Research has since issued clearer guidelines on classifying COVID-19 deaths. But some state administrations have undoubtedly underreported COVID-19 deaths, sometimes by excluding deaths of people with comorbidities.

Maharashtra has, by far, the highest number of COVID-19 deaths in the country, and the bulk of these have occurred in Mumbai. On April 15, the Brihanmumbai Municipal Corporation changed its protocols for recording COVID-19 deaths. Each suspected COVID-19 death was now to be subjected to an audit, and health officials implied that patients with comorbidities might henceforth be omitted from the COVID-19 fatality statistics. The change was accompanied by an immediate dip in the numbers: average deaths per day halved between the five preceding days and the five days following the change. Although numbers started to rise again, they remained considerably lower than might have been expected. 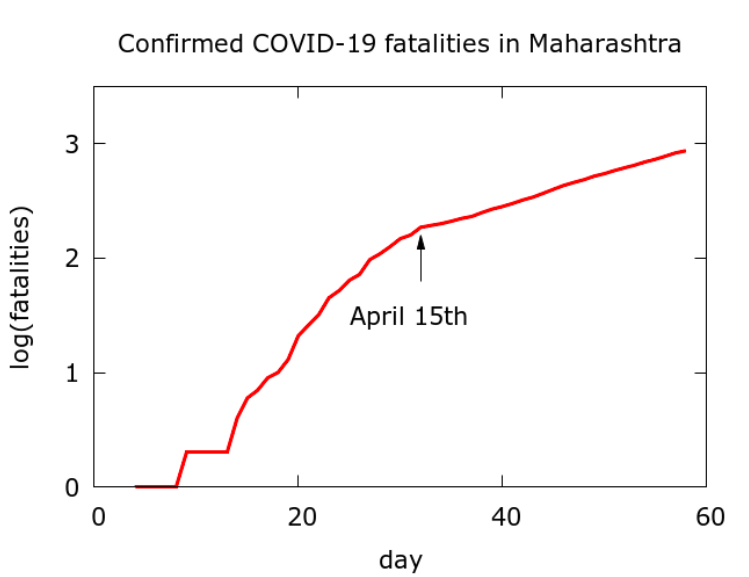 So, how many deaths were “lost” from Maharashtra’s figures in the month or so following Mumbai’s change in rules? I looked to modelling for an approximate answer. The details are here; the broad idea is to use recorded infections as a predictor of deaths. Basic assumptions are that neither the case detection rate (the proportion of infections being detected), nor the true fatality rate of the disease, changed after April 15. With these assumptions, the modelling exercise gives estimates of 1,200 COVID-19 deaths missing from Maharashtra’s figures. This would more than double Maharashtra’s total COVID-19 deaths up to May 12 and increase those for the country as a whole by about 50%.

Note that there are at least two possible alternative causes of the death rate slowdown, but neither is a perfect explanation.

Explanation 1 – The slowdown in deaths is a direct effect of lockdown which began about three weeks earlier. At the same time, higher testing levels increased the case detection rate, offsetting what would otherwise manifest as a lockdown-induced slow-down in infections. Counterpoint: it seems unlikely lockdown would result in a sudden and marked drop in daily fatalities but not infections. By comparison, Gujarat, another state with high fatalities, showed no obvious change in the trajectory of fatalities around this time.

Explanation 2 – Deaths per day fell because some time earlier infection started spreading in a younger and/or healthier population. Although infections continued to rise sharply, fewer of these now led to serious illness and death.

Counterpoint: it is certainly true that infection was spreading in new localities – in particular slums – in early April. Dharavi’s first case was also its first death, on April 1. However, one must consider carefully whether this should really cause such a sudden reduction in fatalities. We might, at most, see a slight and more gradual slowing in fatalities.

In fact, 1,200 missing deaths could be a cautious estimate.  A day before the change in protocol, BBC News India aired an interview with a Mumbai doctor in a government hospital saying that in a single day 6 patients with acute respiratory distress syndrome were brought to his hospital dead. None were tested for COVID-19 because of a shortage of kits. Thus even before the protocol change, there may have been a considerable number of unreported fatalities.

The number of coronavirus cases in India continue to rise. But doctors have told the BBC that the real scale of the outbreak could be much worse.https://t.co/DLBnmOCtBq pic.twitter.com/NJp009SjLB

Underreporting of fatalities is also consistent with later accounts: according to journalist Sucheta Dalal, tweeting on May 9, Mumbai doctors “say the pressure to suppress COVID-19 positive cases is enormous”.

Doctors say the pressure to suppress Covid19 positive cases is enormous and the solution is NOT testing. They cite specific cases where even exposed doctors are not allowed tests under instructions from “seniors “. Morale dipping badly, cases rising rapidly. All want #BodyBags

One troubling consequence of missing deaths is that we can no longer reliably use fatality data to estimate total infections. If we assume a fatality rate of 0.5% and take Maharashtra’s fatalities at face value then, as of May 12, model estimates give about 4.5 lakh infections in the state. In that scenario, about 1 in every 20 infections is being captured by testing. With the same assumed fatality rate but revised estimates of fatalities, there are about 11 lakh infections in the state, in which case only about 1 in 45 infections is being picked up by testing.

Is the story of missing deaths being repeated in other parts of the country? Perhaps. Few states have sufficient deaths for analysis of this kind, and I have spotted no obvious change in the trajectory of deaths elsewhere. On the other hand, if fatality under-reporting is consistent across time – as may be happening in Delhi – then it would be harder to spot in the data.

Finally, a note on the dangers of playing politics around state-wise data. There is certainly pressure on states not to be seen as COVID-19 under-performers. But dashboards of state-wise numbers ignore structural difficulties that states face, such as big cities with overcrowded housing. It is necessary to hold state governments to account over transparency, disease surveillance, and policy responses to COVID-19. But blaming them for high numbers per se would only encourage poor surveillance and underreporting.